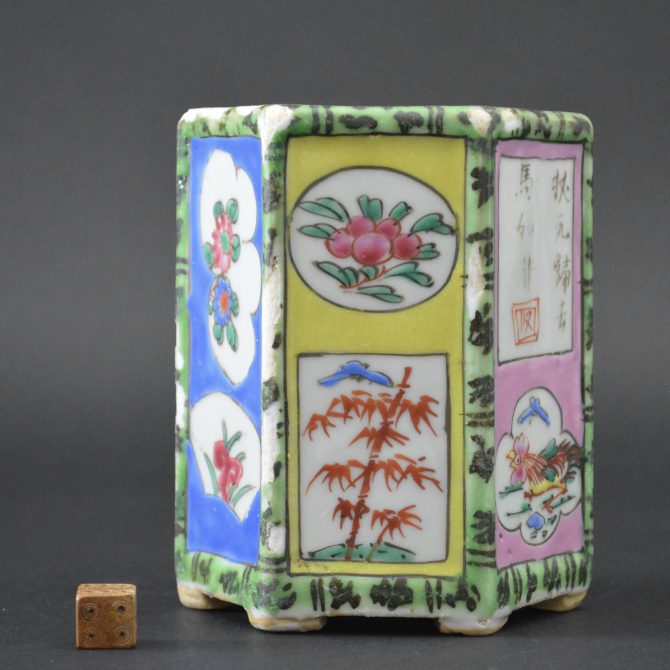 A Yongzheng Famille Rose Porcelain Brushpot, Bitong. The hexagonal form with panels set within a faux-bamboo frame. The brightly enamelled brushpot has pink, yellow and pale blue enamel panels with reserves of different forms including fans. The decoration within the reserves include bamboo, a cockerel, Lingzhi fungus (associated with immortality) and calligraphy. The base is unglazed and shows the texture of the material the clay rested on as well as showing tool marks. There are six shallow hand-cut feet at the corners of the base.

Condition
There is allot of flaking to the green enamel of the faux-bamboo edges. Some wear.
Size
Height 11.9 cm (4 3/4 inches).
Provenance
N/A
Stock number
25570 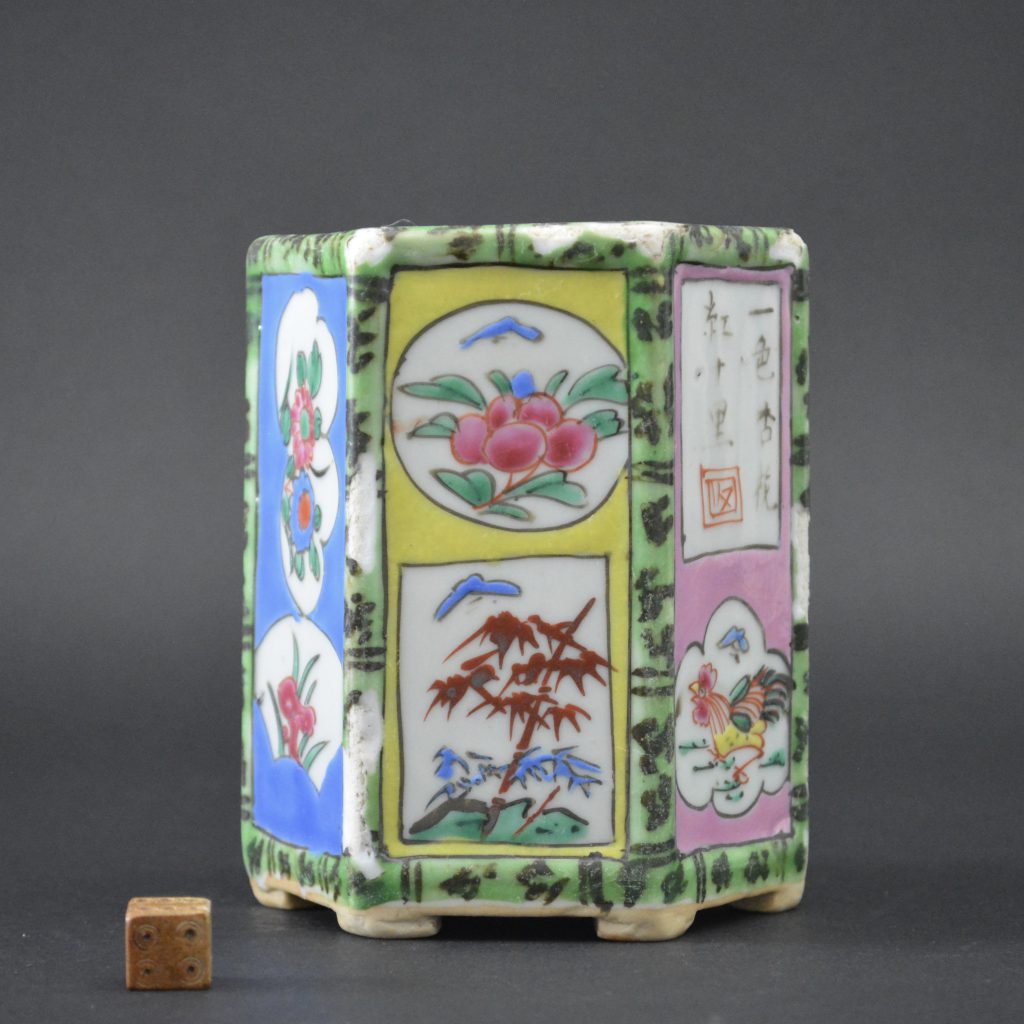 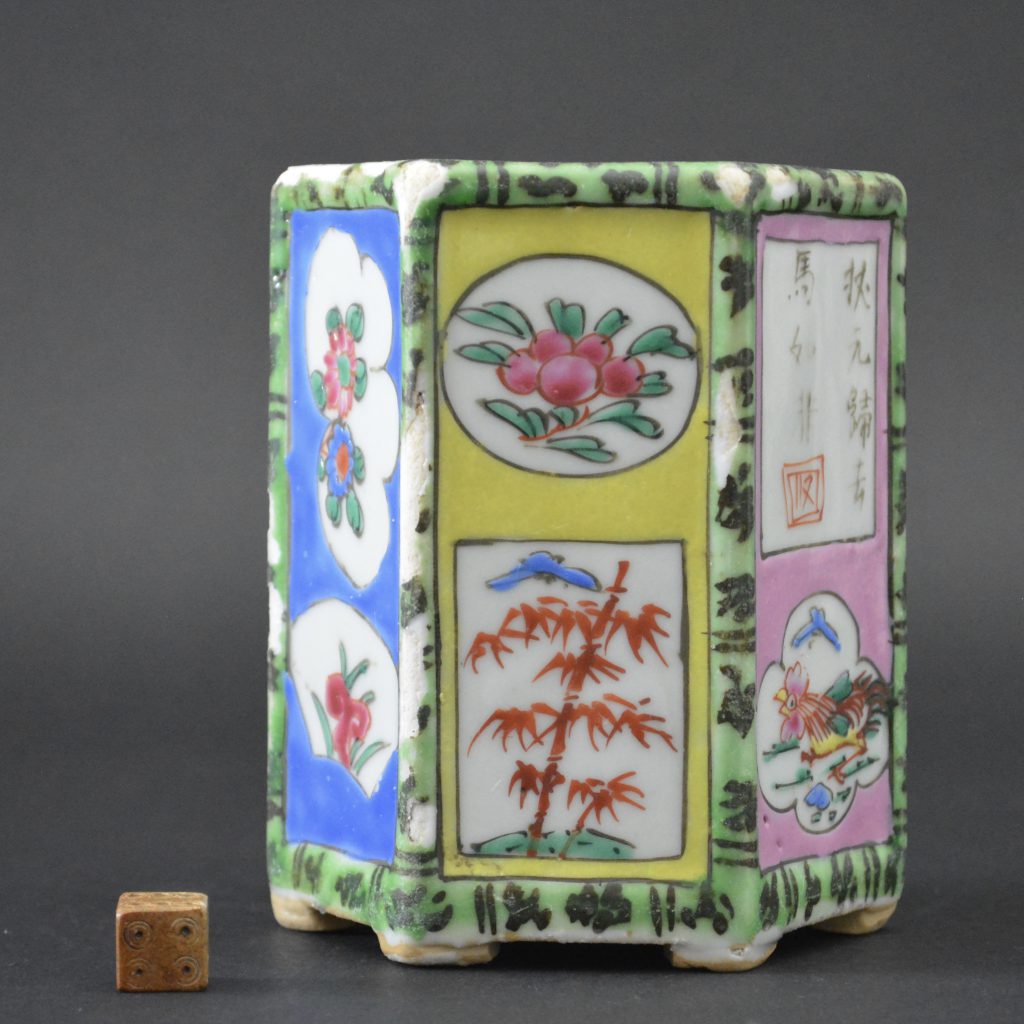 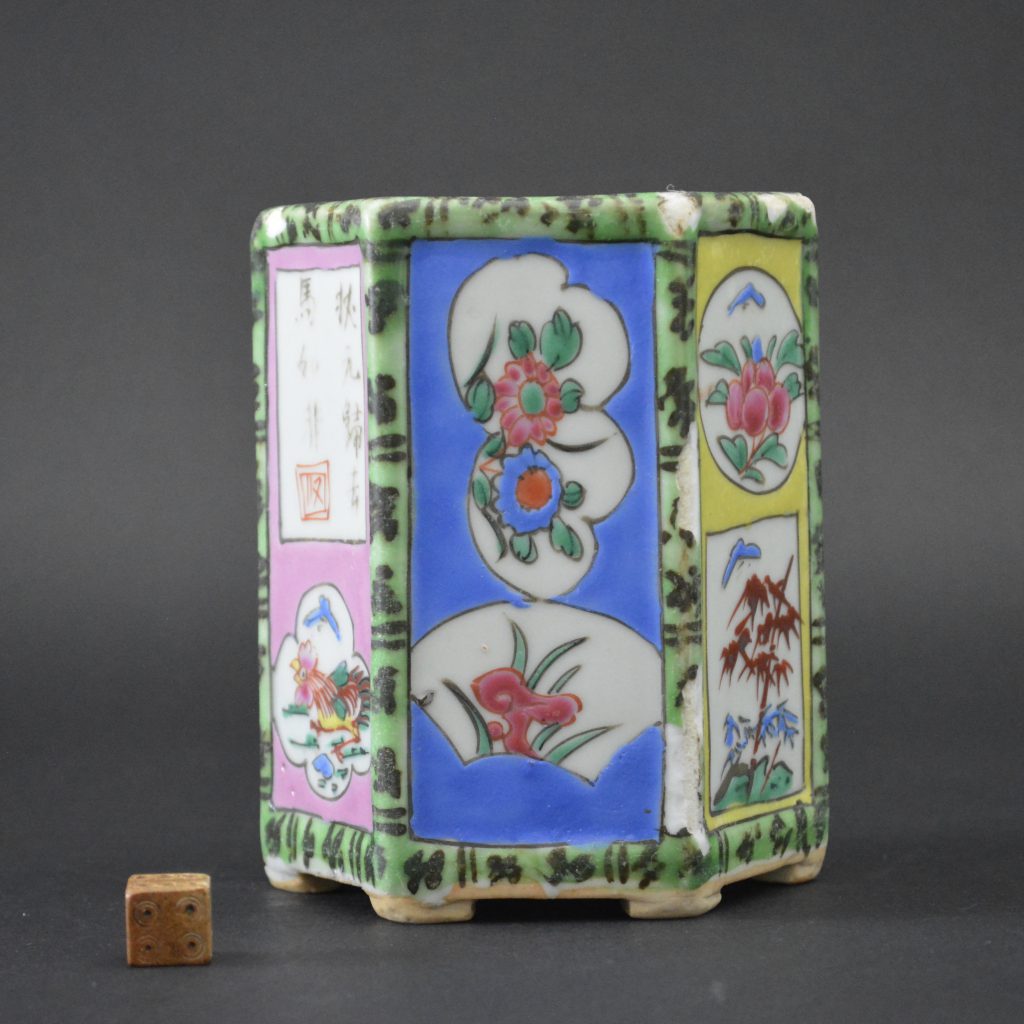 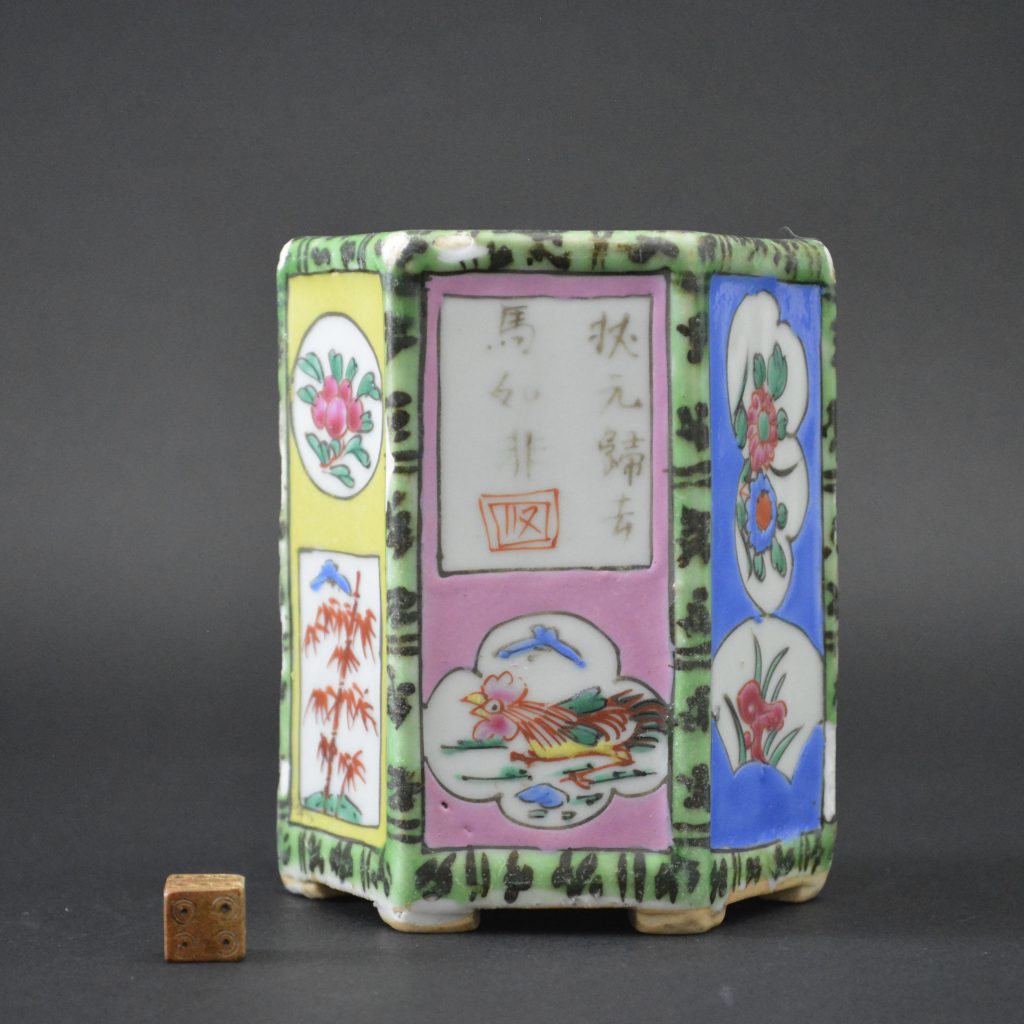 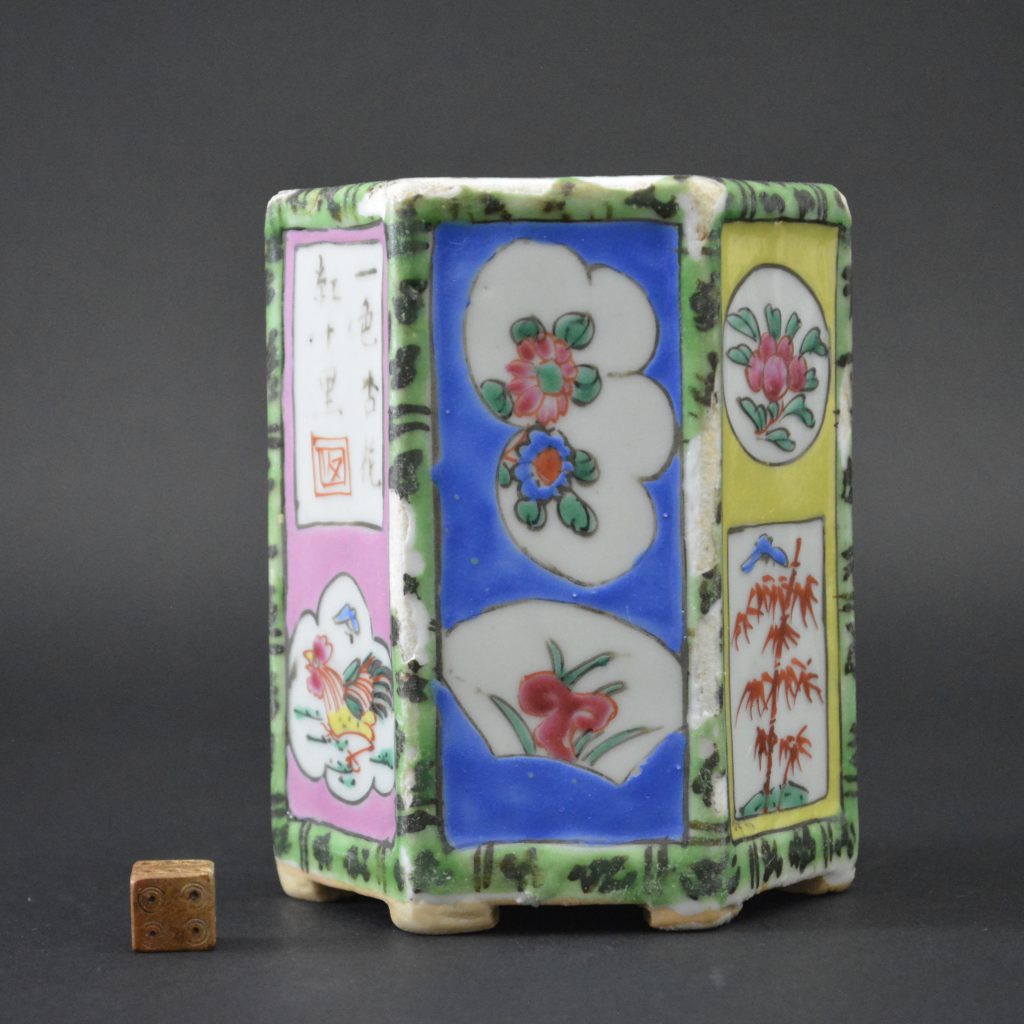 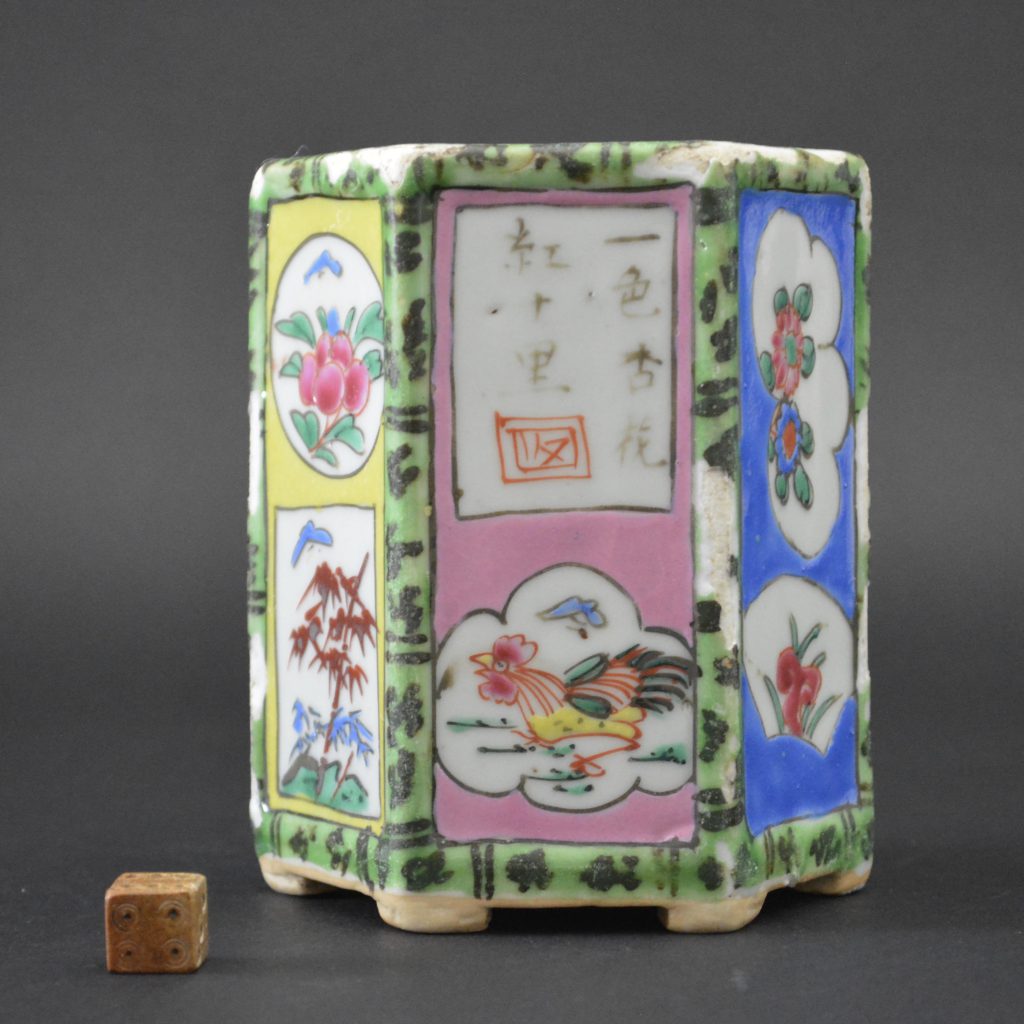 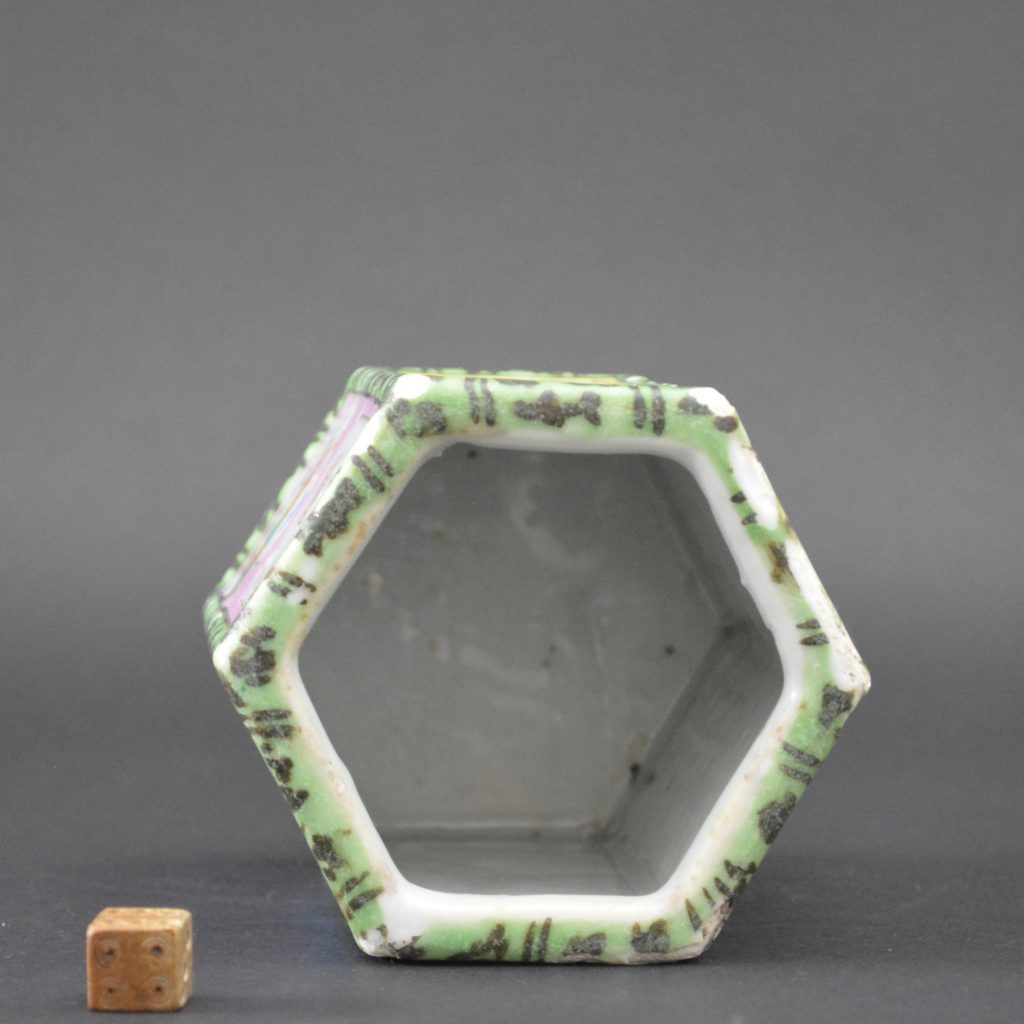 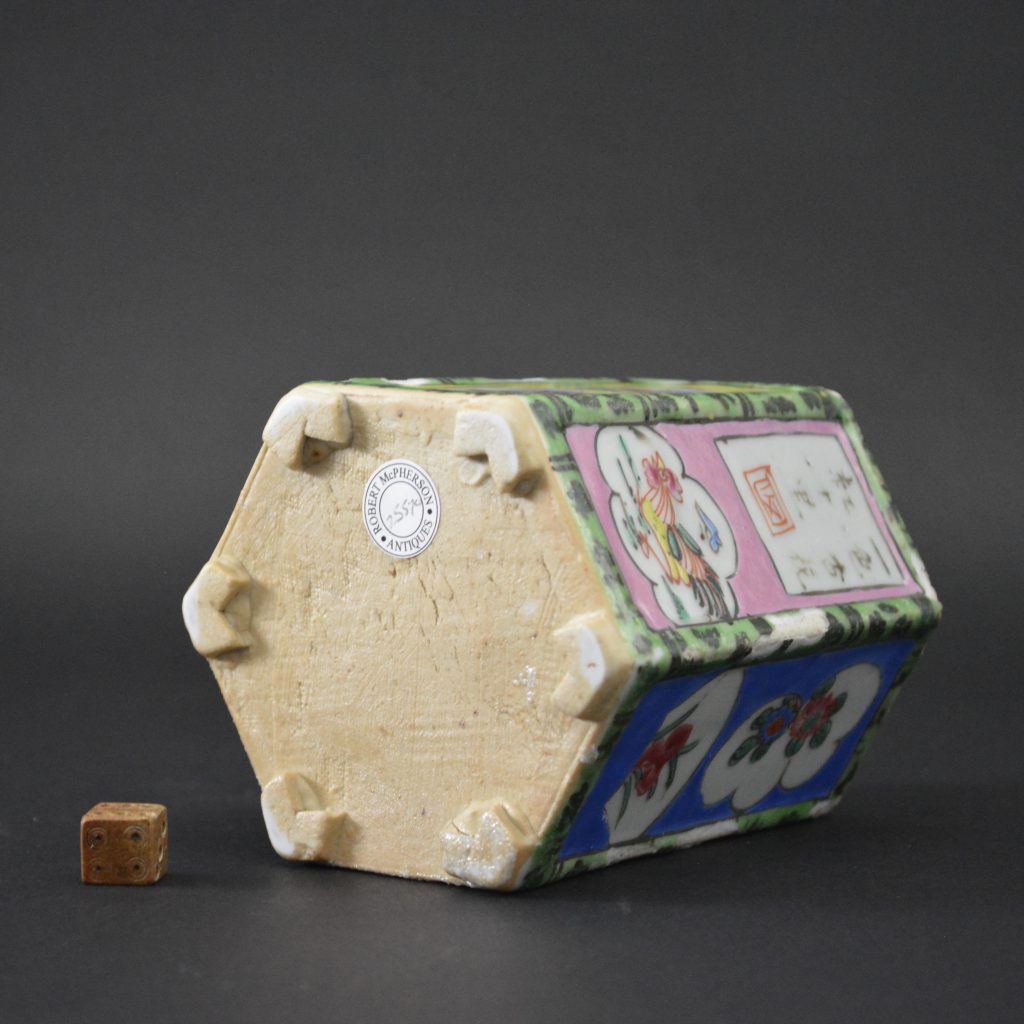 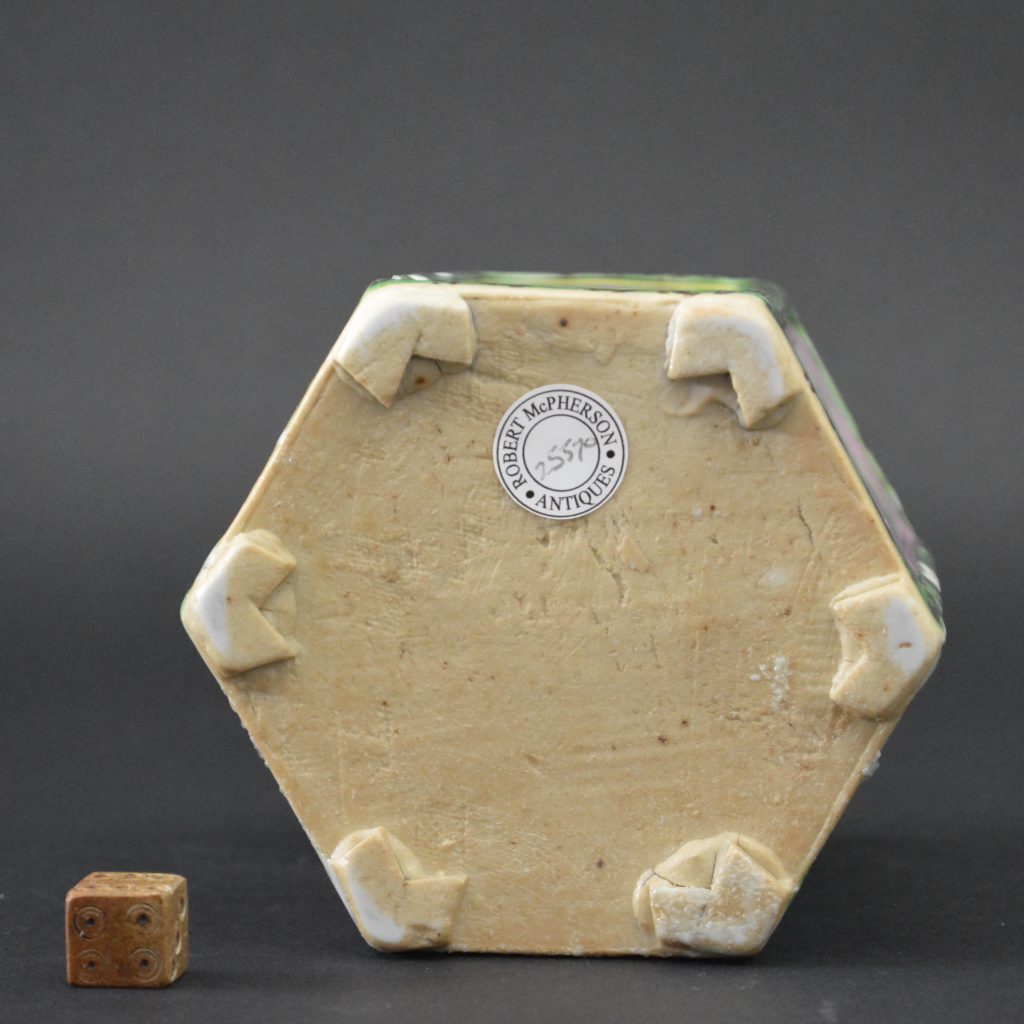 Brushpots / Bitong
Bitong, brushpots are not found in 17th or early 18th century European inventories unlike some other ceramic forms which fore fill a specific Chinese function. Blanc de chine `libation cups`, were for example, made for drinking wine in China but they were imported in large numbers to the West. Their curious forms appealed to Western tastes and were used in European displays or converted with the addition of a gilt bronze handle to become a bonbon dishes. Brushpots on the other hand seem to have been made exclusively for the Chinese domestic market and perhaps also for Chinese scholars in South East Asia. Bitong are an essential part of literati`s desk equipment, what is often referred to as a scholars desk. Other scholarly items for the desk might include a brush-rest, inkstone (for grinding the dry ink) a water pot for the water to add to the inkstone, a brushwasher as well as a table screen. Like other scholar`s objects they were made in a diverse range of material from natural gnarled branches of trees, highly polished wood, jade, bamboo to name but a few. Brush-rests were used for keeping the brush from making stains on the scholar`s table in between use while the scholar was working, while brush pots were used for storing the brushes when they were not being used.

Famille Rose Porcelain
China`s ceramics industry has for thousands of years be connected to events in the world outside it`s own borders. Importing materials, assimilating foreign ideas, foreign tastes and inventions, as well as making ceramics for cultures completely foreign to it`s own tastes and ethos China has always adapted it`s ceramics industry to fit the needs of it clients who ever they may be. It was during the Qing dynasty, especially from the late 17th century, that the Chinese became especially interested in Western technology and science. Famille Rose enamels were developed as a consequence of this interaction, the Chinese referred to these enamel colours as foreign colours from as early as 1734 but there origin can be traced back to the 1720`s if not earlier. The impetus for the development of this new palette was the direct involvement emperor Kangxi (1662-1722) who desired to improve expertise in the manufacture of all crafts, especially in relation to learning about technology from abroad. Famille Rose enamels were different to the earlier Famille Verte enamels in a number of ways, the most obvious being the colours used, but the enamels themselves were different in that the translucent colours of the earlier palette were making way to thicker impasto opaque enamels of Famille Rose. The rose colour that gives its name to this colour scheme is created from colloidal gold (a suspension or colloid of sub-micrometre-sized particles of gold in a fluid). This ruby red colour was augmented by two other newly introduced coloured enamels, an opaque white which was made from fine crystals of lead arsenate, the other new colouring agent was lead stannate used for the opaque yellow. These colours, while new to China, were certainly not new to Europe but the effect of them on porcelain certainly was new. Famille Rose didn`t entirely replace Famille Verte as such but it certainly became far more popular. Famille Rose enamel was used in the Imperial workshops to paint some of the most complex intricate designs ever carried out on Chinese porcelain, it was also used for Chinese taste or domestic market porcelain, but was also used to decorate a vast array of Chinese export porcelain of all shapes and sizes.