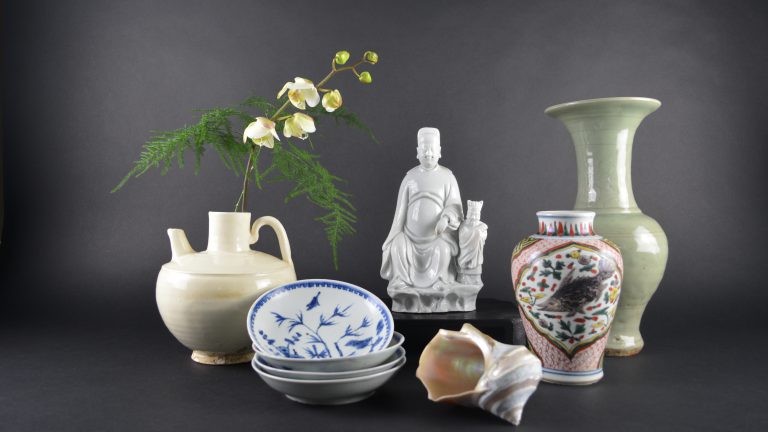 The history of the business #

Robert McPherson’s interest in antiques started when he was a young boy. As a school boy it was above his means to collect antiques, so he would buy and sell what he could to fund his collection, including propagating plants and selling them to his teachers. He began collecting military cap badges and coins when he was ten years old. At the age of fourteen Robert visited the war graves of France, this prompted him to sell his military collection.

His interest turned to Victorian antiques, especially ceramics. However he soon acquired his first piece of Chinese porcelain : an 18th century Qianlong Famille Rose tea bowl for the sum of ten pounds.

After a short period working on Saturdays for a jewelry dealer, he decided to have his own weekly stand at the Camden Passage Antiques Market in Islington, London. On the 25th of May 1980 at the age of 16 his career as an antique dealer began. 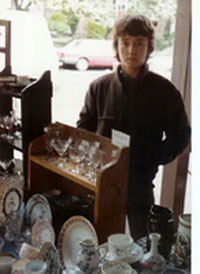 The first day was a great success with sales totaling £74.50p, more than he could ever have dreamed of. The first item he sold was a pair of Victorian scissors for £2, other pieces include a Foley cup with a Boer war design (£4), a photograph of a lady in a frame c.1920 (75p) and ‘3 ironstone ducks’ won at a school Fete for £2.

During this period he started studying the conservation of prints and drawings at the Camberwell Art School in London, after all his mother had said he should get a ‘proper’ job. Being a conservator at a museum certainly would have been a proper job but Robert’s real interest was always with the objects themselves.
His stand at Camden Passage enabled him to collect antiques and his teenage bedroom soon looked like a museum, filled with hundreds of pieces of pottery and porcelain, paintings, prints drawings and furniture.

He would go to early morning markets before college to buy things for his Saturday stall and on his holidays he would go on buying trips out of London, often staying with his Aunt and Uncle in Taunton.
His Father took him to Camden Passage and collected him every Saturday and his outdoor stall flourished, two adjoining tables were then taken in the market. Robert had a regular following and one or two of these customers still come to buy from him at the shop after all these years. 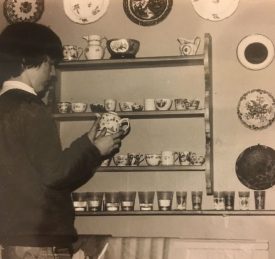 When he was nineteen, Robert moved indoors to Grays Antique Market, near Bond Street in central London. It was at this period he became a specialist in Chinese ceramics. His business soon expanded and his stand at Grays doubled in size.

In 1991, Robert moved to Stockspring Antiques, dealers in English Ceramics, who were located in Kensington Church Street. The early 1990s were a difficult period in which to trade but the business soon began to thrive and expand. Later taking up half of the shop due to his increasing stock. While at Stockspring Antiques he organised an exhibition of Shipwreck Ceramics, this was the first exhibition at a shop.

During this period Robert started vetting antique fairs in London and in the country. He was elected to be a member of The British Antique Dealers Association (B.A.D.A.) in 1999. The shop run by Stockspring Antiques was at various times shared by Errol Manners, Gary Atkins and also Rod Jellicoe.

During the 1990’s Robert McPherson and then R & G McPherson Antiques exhibited at the Summer Olympia Fine Art and Antiques Fair, while sharing a shop and when they had their own premises. They then held exhibitions in their own shop. 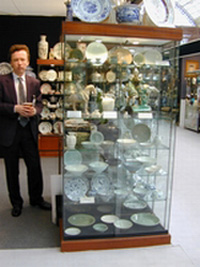 The sale of 15th century Vietnamese pottery by auction in America from a shipwreck, referred to as the Hoi An Hoard, was very exciting. There were so many new forms, so many designs that were not previously known.We bought hundreds of pieces, from ewers decorated with elephants to dishes with aggressive looking fish eating other fish, tiny boxes, and vases painted with birds. We were it seems the only English dealers to be excited by this new discovery, most dealers were not interested as it was not Chinese porcelain but to us this made it more interesting. Knowledge of Vietnamese ceramics was transformed by the discovery of this important wreck. The British Museum purchased several pieces from the auction.

We decided to have an exhibition based on this newly discovered wreck but we included ceramics from other wrecks as well. It was extremely successful and led us to have two more exhibitions of ceramics from shipwrecks. 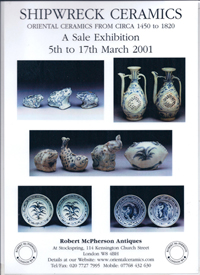 The Hoi An Hoard, as has been the case with several other wrecks, was not found by archaeologists nor even by historians, but by fishermen, though happily not excavated by them. It became in fact the only commercial underwater site to have been excavated in a correct archaeological manner. It is one of the earliest cargoes (dated c. 1450-1500) to have come on to the market and to my mind is the most interesting and important of them all. Moreover, it is the only large Vietnamese cargo to have been discovered. A partnership was formed, to take charge of this landmark excavation, between the Vietnamese Government and M.A.R.E., the Maritime Archaeological Research Unit of the University of Oxford, under the Directorship of Mensun Bound, Triton Senior Research Fellow, Saint Peter’s College, Oxford. 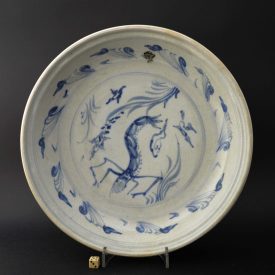 Vietnamese ceramics were not treated with the importance they deserved until very recently. Several excellent new books have now been published on the subject and an exhibition of Vietnamese Blue and White has been held at the British Museum, where objects from the Hoi An Hoard featured among the exhibits. Together with the recent excavation of the kiln sites, this cargo underlines the importance and individuality of Vietnamese ceramics. I believe that the cargo in fact contains more Vietnamese ceramics of the period than exist worldwide, taking into account not only all the museums but also all the private collections. The Hoard will be a source of research for years to come.

In January 2003 Robert and his wife realized their dream. They opened their shop at number forty, Kensington Church Street, in London. 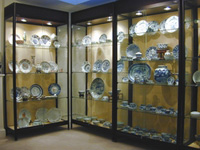 There were many exhibitions and parties during the time in the shop, they were held in June and November, the latter was for a few years part of ‘Asian Art in London’.

I have been on the vetting committee of several major antique fairs in London and the provinces, a job I have been doing for over fifteen years. As a vetter I am responsible for authenticating antiques prior to them being offered for sale to the general public.

I have been a committee member of the Oriental Ceramic Society and have been on the board of ‘Asian Art in London’. 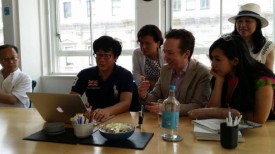 As an adviser to a government department, I have been called upon to authenticate and value Chinese ceramics, as well as give an opinion as to whether they are suitable for display in a public collection.

At several occasions I was  called on as an expert witness to help asses the importance of Chinese and Japanese ceramics as part of a committee which decides if the objects are of national importance and should be kept in the country.

Because of my experience in the authentication of Chinese Ceramics in all these different areas, I was asked in 2016 to be on of the expert witnesses in the Court Case the Michael Butler Estate.

We frequently held exhibitions at our Kensington shop as part of ‘Asian Art in London’. As with all our exhibitions there would be a queue from early in the morning, which many of my customers still remember. 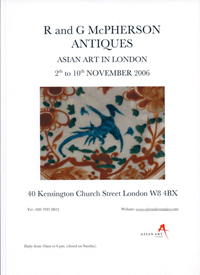 ‘Eight Days In June’ was a combined exhibition of English Porcelain, English Pottery and now Oriental Ceramics held at various locations in Kensington Church Street during June. The immediacy, the excitement and the uncertainty of an auction suit some temperaments, responding eagerly to the glamour of the gavel. Yet the calmer and less hurried process of buying from a dealer, in a less frenzied environment, offers many advantages. The evolution of a business relationship with a specialist dealer, developed over many years and based upon mutual trust and respect, cannot be replicated by an auction house, its loyalty being divided between the buyer and the seller. The dealer with his specialised knowledge is able to act as a mentor, a touchstone for the opinions and aspirations of his client. Each transaction and each meeting of minds should be part of a longer association, enabling dealer and client to become partners, sharing the same motivation and the same enthusiasm. 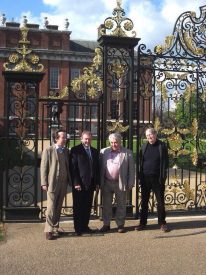 There are still many such partnerships, often blossoming into friendships but sadly, there are far fewer specialist dealers nowadays. Yet Eight Days in June, together with Art-Antiques London, Masterpiece and all the other kindred events in London in June, serve as a showcase, not only for the range and quality of the antiques available.

‘Eight Days In June’ was seen as a serious, specialised event. Well, on one level it is, but it can also be seen as an excuse for collectors and colleagues from around the world to meet up and have a good time. It is the perfect occasion to catch up with old friends and meet new ones. At its heart is a true love of ceramics and a never-ending quest for knowledge. The participants are a group of people who have known each other for years.

This is a view of the entrance and split ground floor of our old shop in Kensington Church Street, London W8. 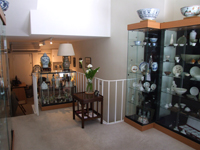 It was always busy with regulars coming in to see the ceramics that had just arrived and to meet us as well as each other. There was a very friendly atmosphere, often resembling a cafe rather than a shop. We liked to think of it as a traditional antique shop rather than a gallery.

MOVE TO THE NETHERLANDS #

In 2017 I moved to the Netherlands to live with my partner Maaike.  After dealing in London for 37 years it was very exciting to be starting a new life in a country I know very well and have always enjoyed visiting.

We live in the northern provenance of Friesland, in the small but beautiful rural town of Joure.  It is not far from the wonderful ceramics museum the Princessehof in Leeuwarden and the Groninger museum, both famous for their excellent collection of ceramics.  We are about one hour and forty minutes from Amsterdam.

In the last couple of years we have been  successfully dealing from the Netherlands. We have been meeting new colleagues and new clients but also were able to keep a contact with the existing clients. Robert is in London several times a year to visit friends, collectors as well attend auctions and go to lectures. 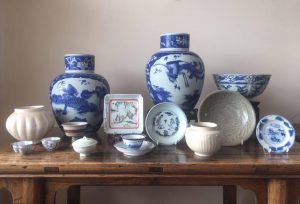 Even though Joure is not very familiar to people we have been privileged to host several meetings for ceramic lovers. Both the Norwegian Society of Oriental Ceramics and the Dutch group interested in oriental ceramics which is part of the KVVAK. came over for a casual lunch while we were able to talk and learn together about the subject we all love.

Since a few months I am trying to learn how to make pots in pottery class. It’s a great way to learn how clay feels and how to work it. For me it’s an additional way of learning more about the subject I have been learning about for almost 40 years. 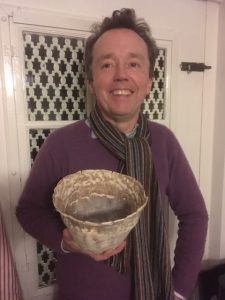 Maaike has found her way into the business which is far from what she is familiar with. Coming from the caring provision, she is now starting to be more involved and is working on the photography of the website. One of her ideas are the still lives which you will find on different places on this website.