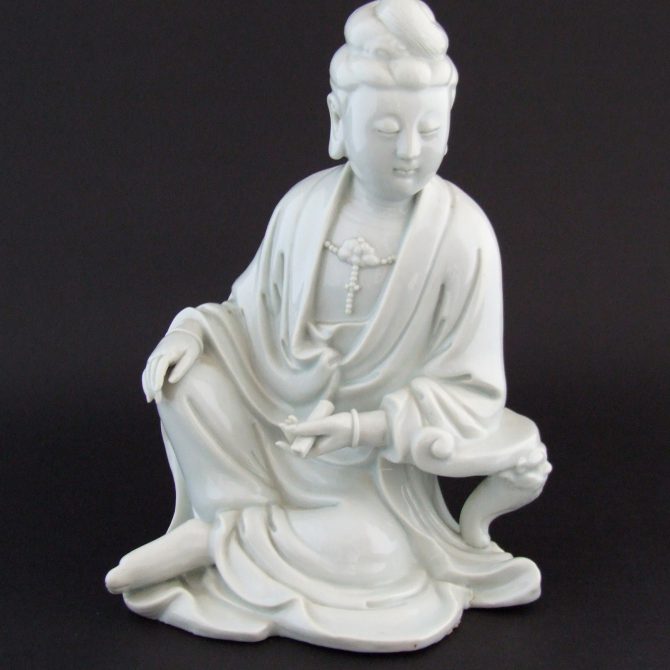 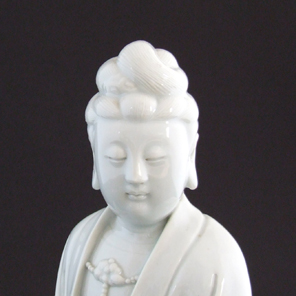 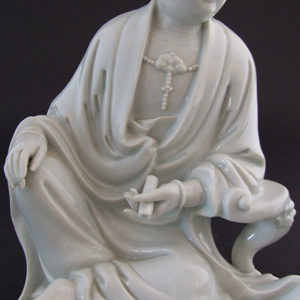 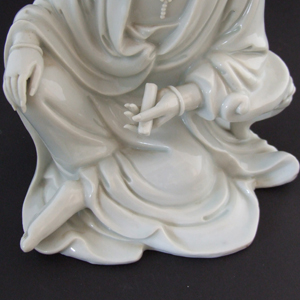 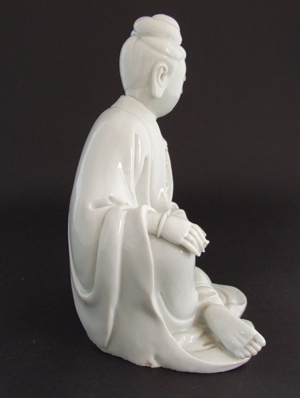 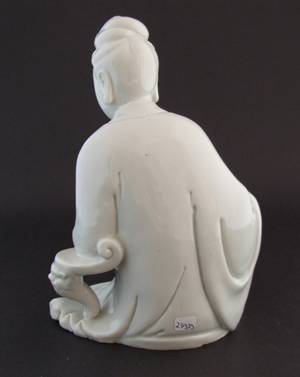 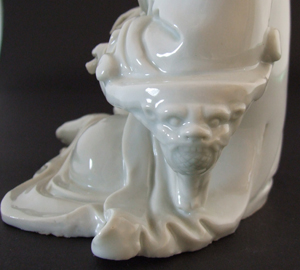 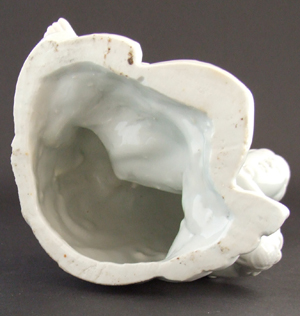 Blanc de Chine Porcelain :
The porcelain known in the West as Blanc de Chine was produced 300 miles south of the main Chinese kiln complex of Jingdezhen. The term refers to the fine grain white porcelain made at the kilns situated near Dehua in the coastal province of Fujian, these kilns also produced other types of porcelain. A rather freely painted blue and white ware, porcelain with brightly coloured `Swatow` type enamels as well as pieces with a brown iron-rich glaze. However, it is the white Blanc de Chine wares that have made these kilns famous. The quality and colour achieved by the Dehua potters was partly due to the local porcelain-stone, it was unusually pure and was used without kaolin being added. This, combined with a low iron content and other chemical factors within the body, as well as the glaze, enabled the potters to produce superb ivory-white porcelain. White porcelain was made at the Dehua kilns from early times, some books refer to the white porcelain produced during the Yuan period as being Blanc de Chine, but I think it is not really until the latter stages of the Ming dynasty, during the late 16th century, that a porcelain with clearly recognisable Blanc de Chine characteristics was produced. There is a theory that there was a brake in production during a large part of the 18th century. I am highly sceptical of this, it seams likely that Blanc de Chine porcelain was made all the way through, uninterrupted from the Ming dynasty to the present day.

Guanyin :
Figures of Guanyin are some of the most commonly encountered images in Chinese figurative art. Guanyin was the Goddess of mercy. Her origins stem from Tibetan Buddhism, she was originally the patron saint of Tibetan Buddhism `Avalokitesvara`. Guanyin is actually the shorter form of the name Guan shi yin, which means “one who observes the voices of the world.” True to her name, Guanyin listens to and understands the worries that plague man`s existence. Because of her mercy and generosity, Guanyin is the most-loved of China`s divinities, the one people turn to for assistance in their everyday lives. Guanyin is specially venerated by those who are hoping to have children or those who are about to set out for sea. Guanyin has been said to have some of the same qualities as the Virgin Mary of Catholic theology, like the Virgin Mary she is sometimes portrayed holding a child in her arms, indeed she was associated with fecundity and given the title `Giver of Sons`. Guanyin is usually portrayed wearing a white cape. In her right hand. On her head is a crown in the style of the Amitabha-buddha, she is normally shown meditating in a seated position. While the worship of Guanyin can be traced back historically to India, she is the star of countless legends and folk tales in China. Guanyin`s home on earth was the Putuo mountains, located on an island on China`s eastern coast to the south of Shanghai. In China, Putuo-shan is one of the most sacred places in Buddhism and the temple dedicated to Guanyin on the mountain is one of the most important pilgrimage site for Buddhists and non-Buddhists alike. Guanyin`s birth is celebrated on the 19th day of February, and her enlightenment is celebrated on the 19th of September. On those days, the pilgrims flock to Putuo mountain.