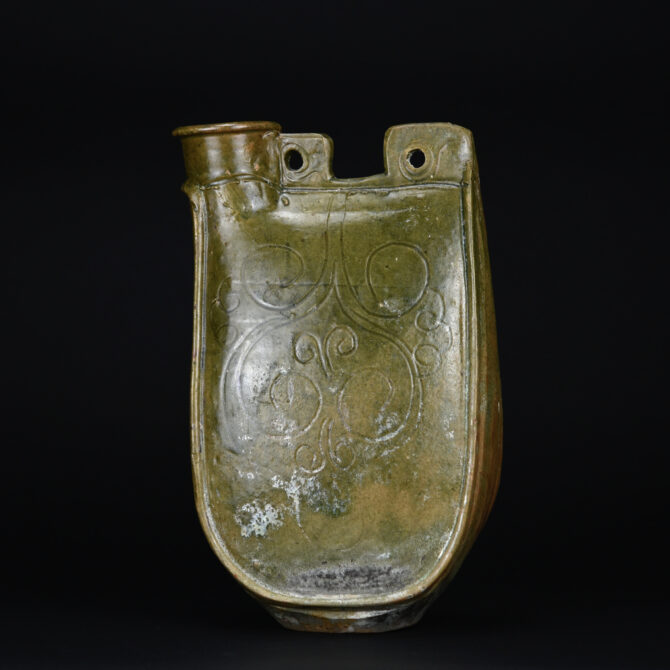 A Liao Cockscomb Flask, North-East China 907 to 1125. This tall olive-green flask is made of hard red pottery, the shape is one of the most distinctively of Liao all ceramic forms. There are numerous versions of these flasks, this one has rather flat angular shaped attachments to the top, these would have had a cord through the cutout holes. Many have pointed tops to these flanges or handles resembling a cockscomb. So often ceramic forms are based on metal but these cockscomb flasks are based on leather. A flat leather flask was an essential item when you spend much of your life on horseback, your water or other drink could be easily stored from the cords on the side of your horse. These lead-glazed pottery flasks reflect the nomadic life of the Liao. The edges are raised to imitate sewn leather seams, the rectangular flanges have tapered edges to give the impression of pared leather and the incised decoration mimics that found on leather. Organic material such as fabric and leather are often worn-out and discarded, they rot, decay and so therefore they rarely survive when in archeological sites. These pottery flasks give us an insight it to the wide range of leather liquid containers that would have been used in daily life in north China during the Liao Empire.

Condition
There is a restored chip to the side 'seam' c.4 cm long, it goes into the body of the vessel slightly. The rim has chips restored, the spray goes inside in one area.The restoration is difficult to see but shows up with a U.V. lamp. It is sprayed restoration so the repairs are very likely to be smaller than the sprayed area.
Size
26.4 cm (10 1/2 inches)
Provenance
A Private American Collection.
Stock number
26650 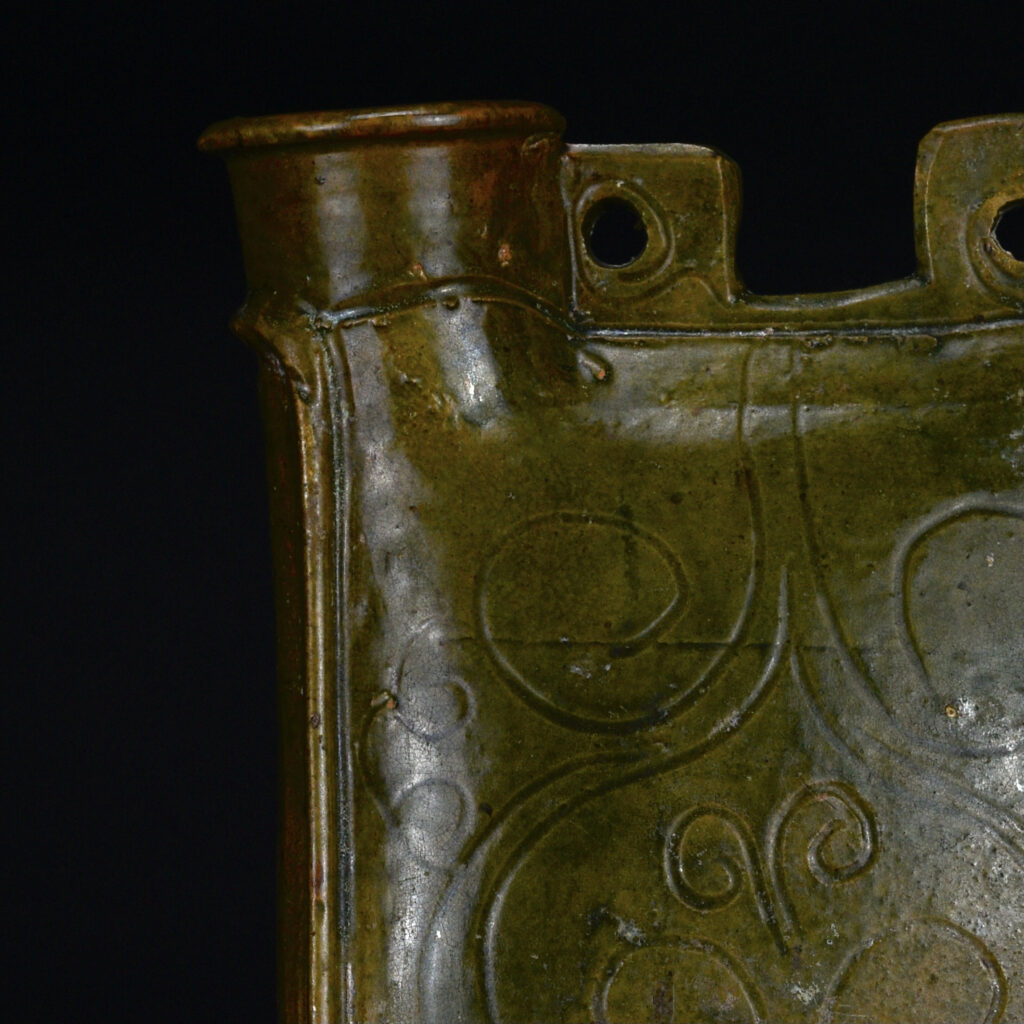 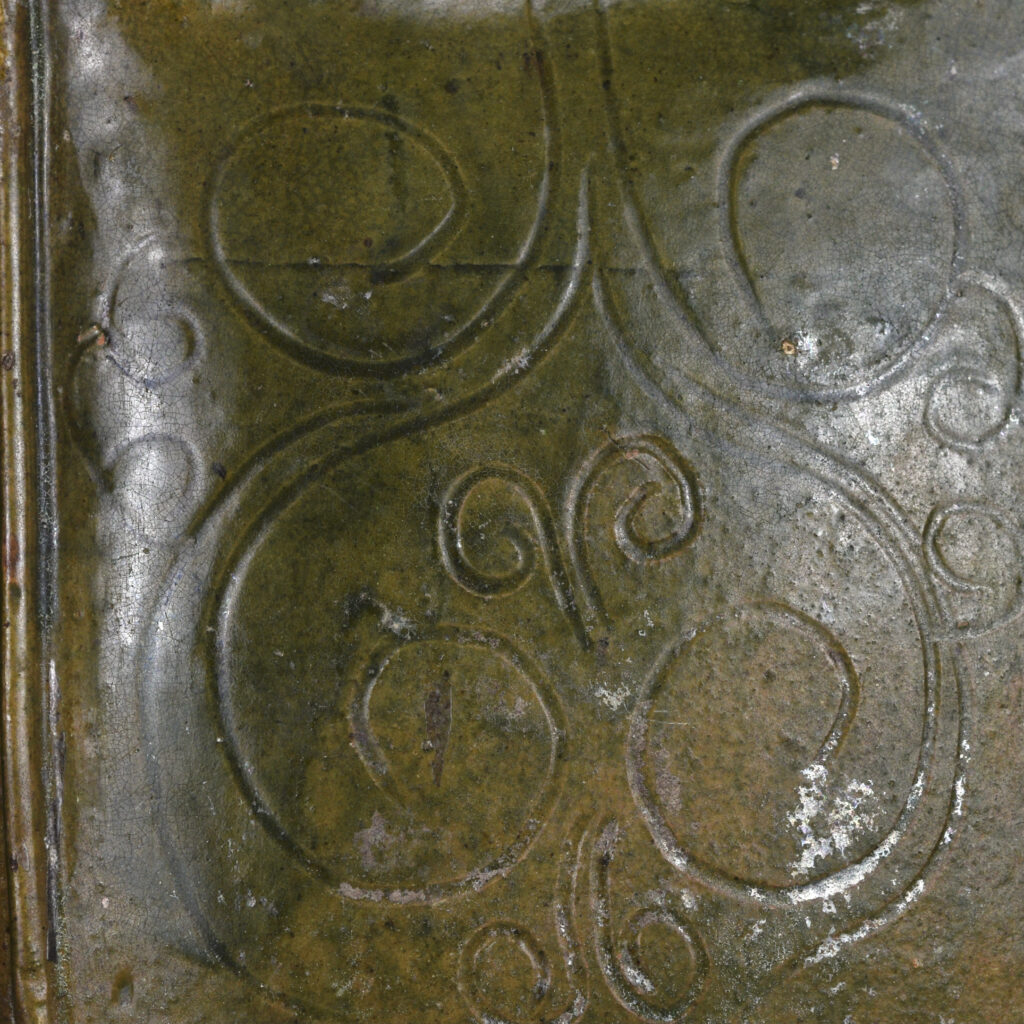 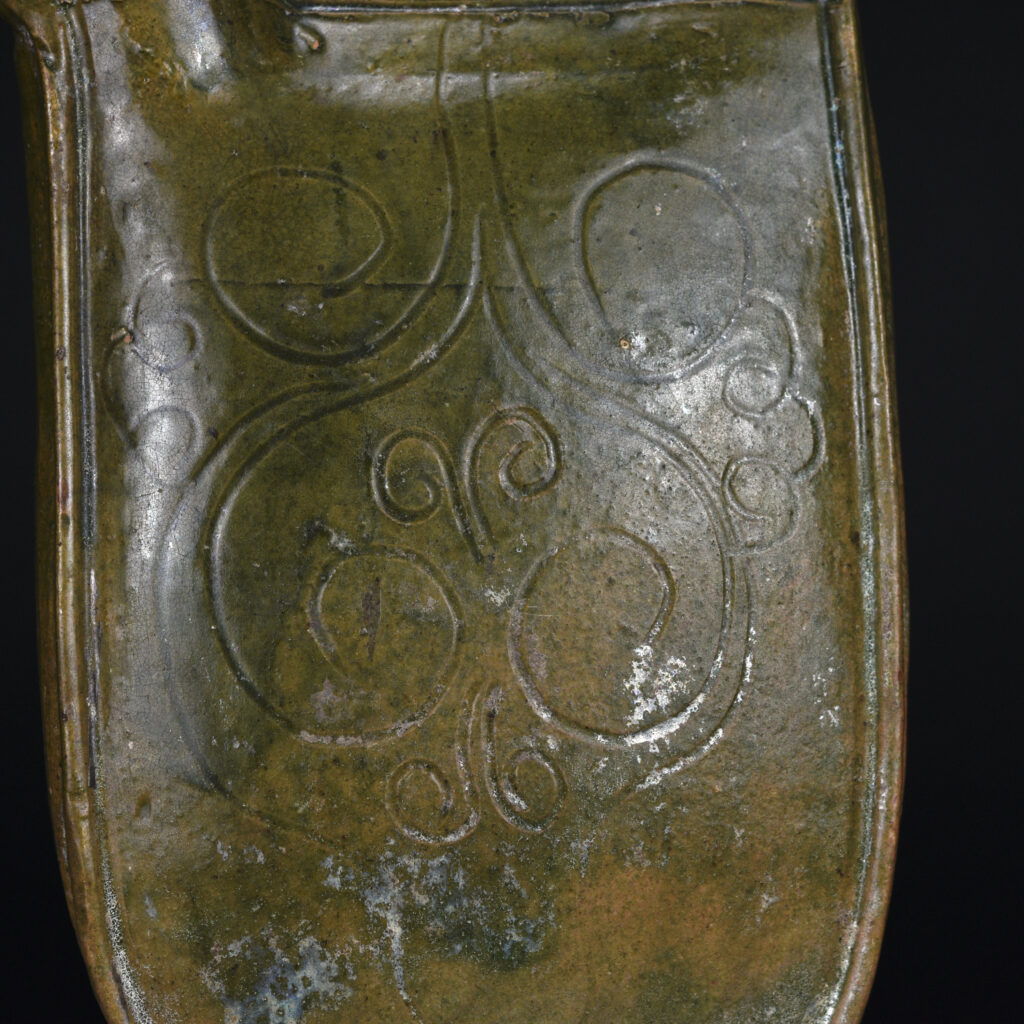 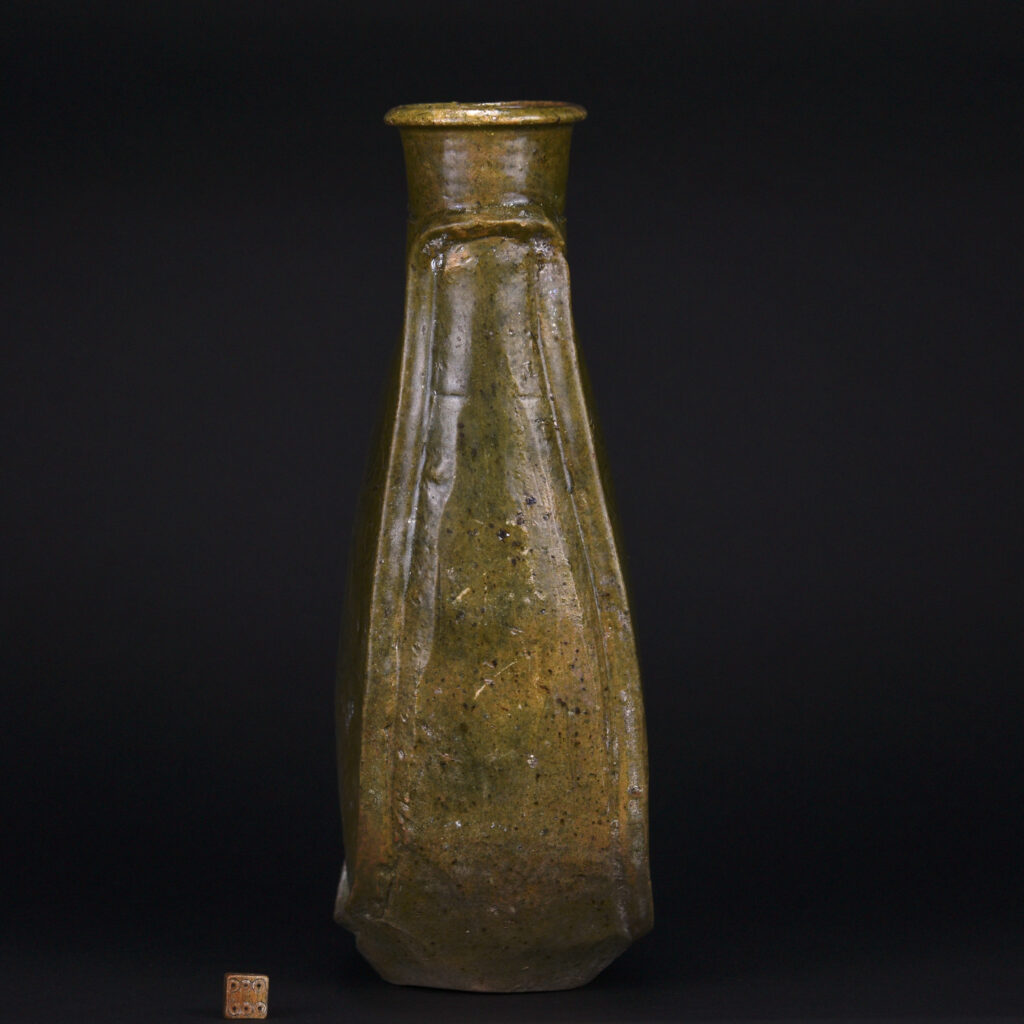 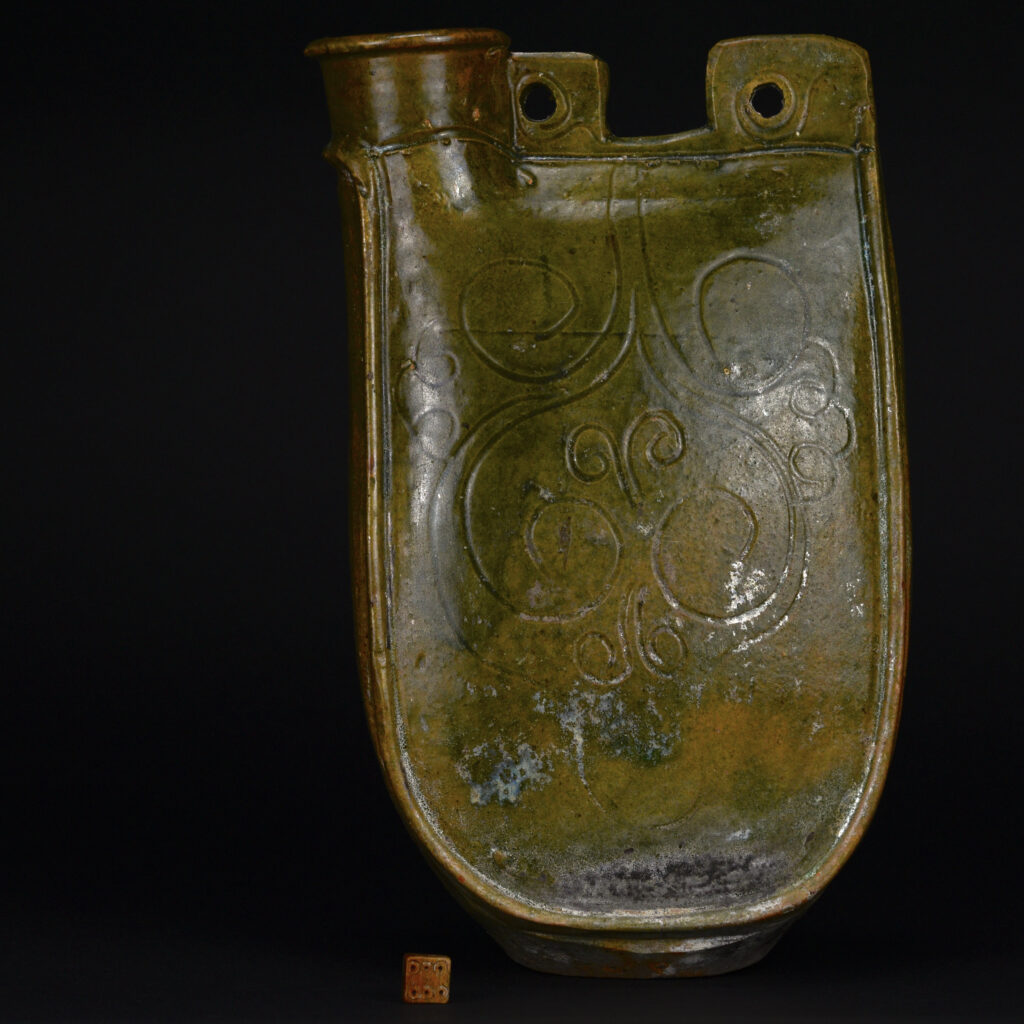 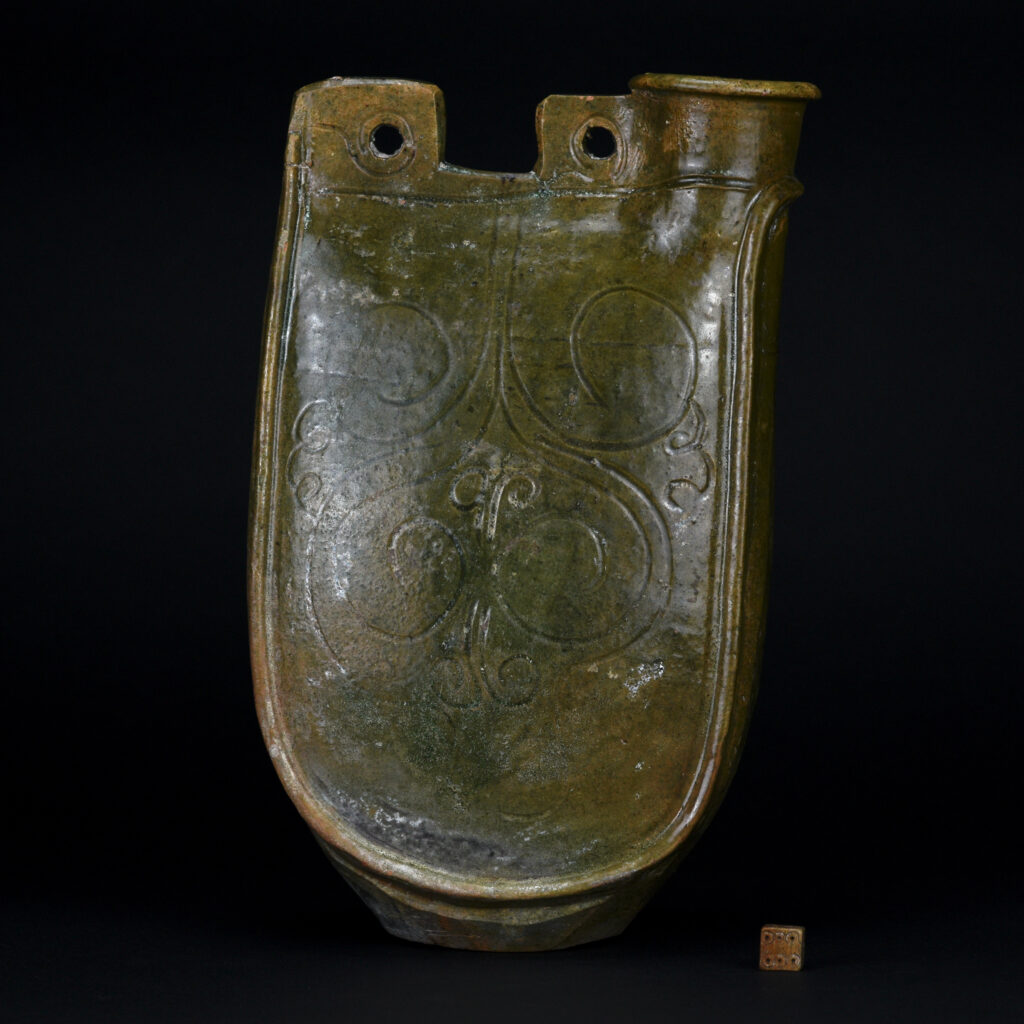 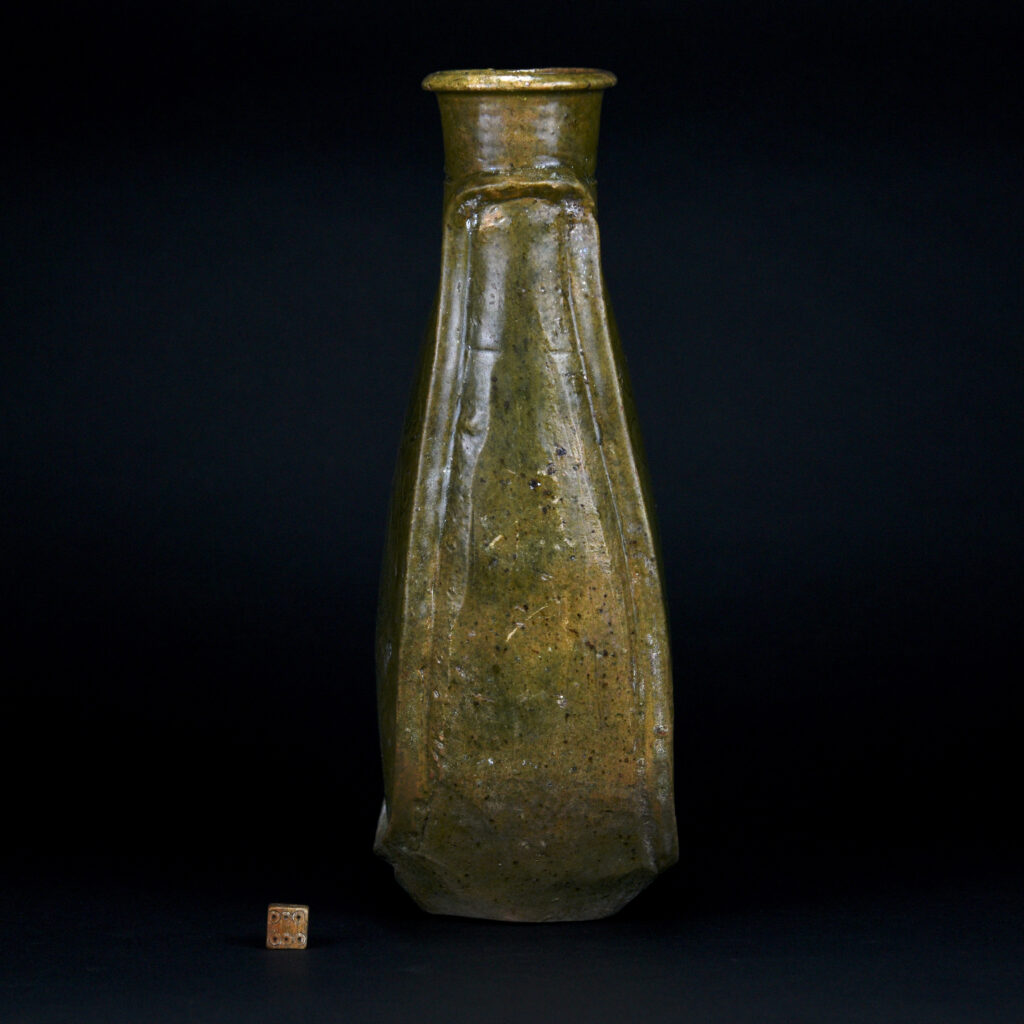 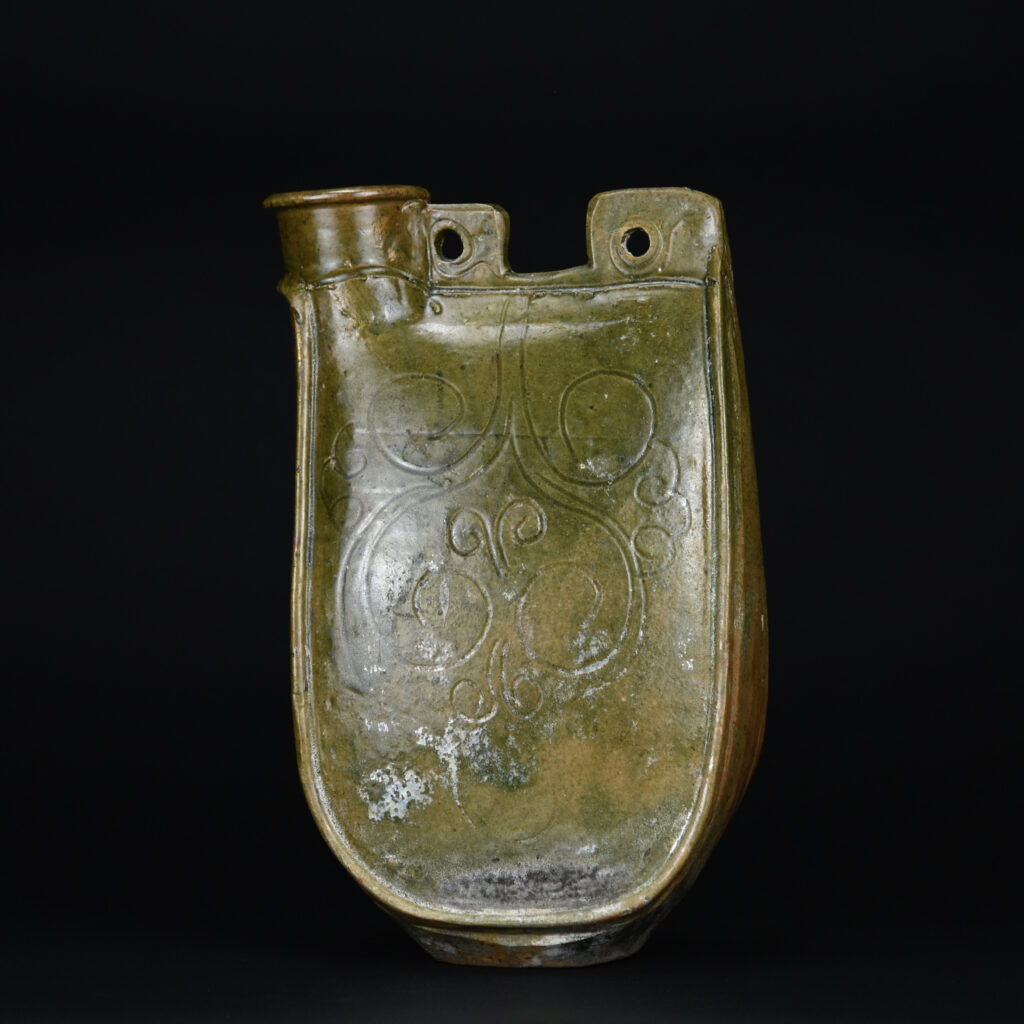 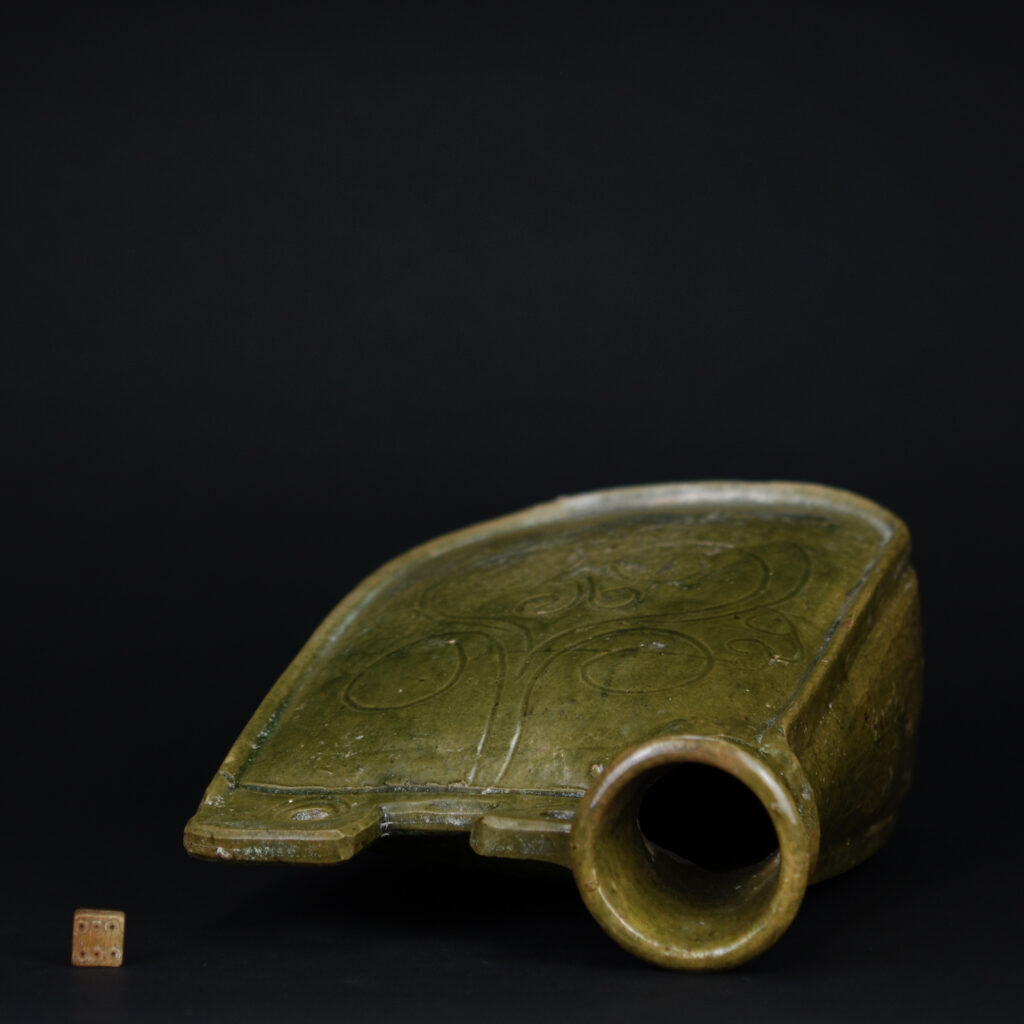 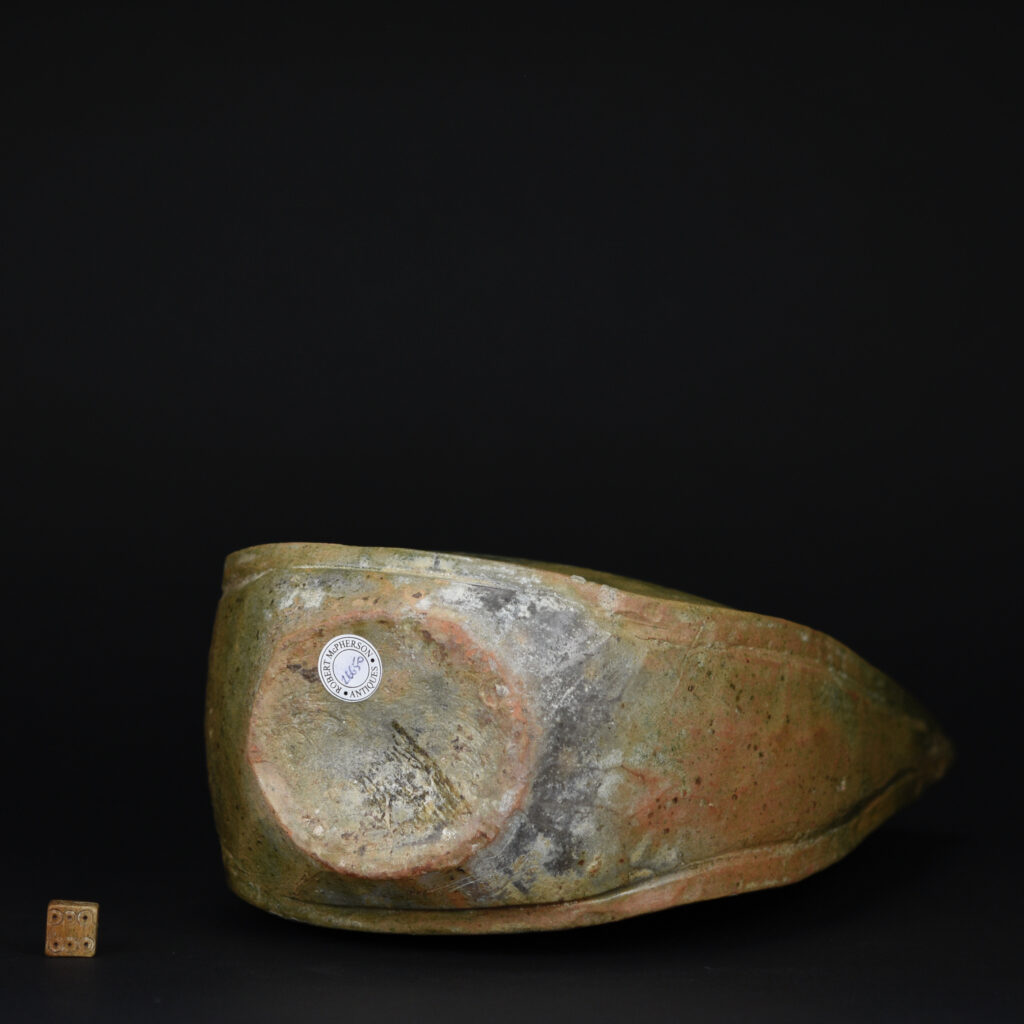 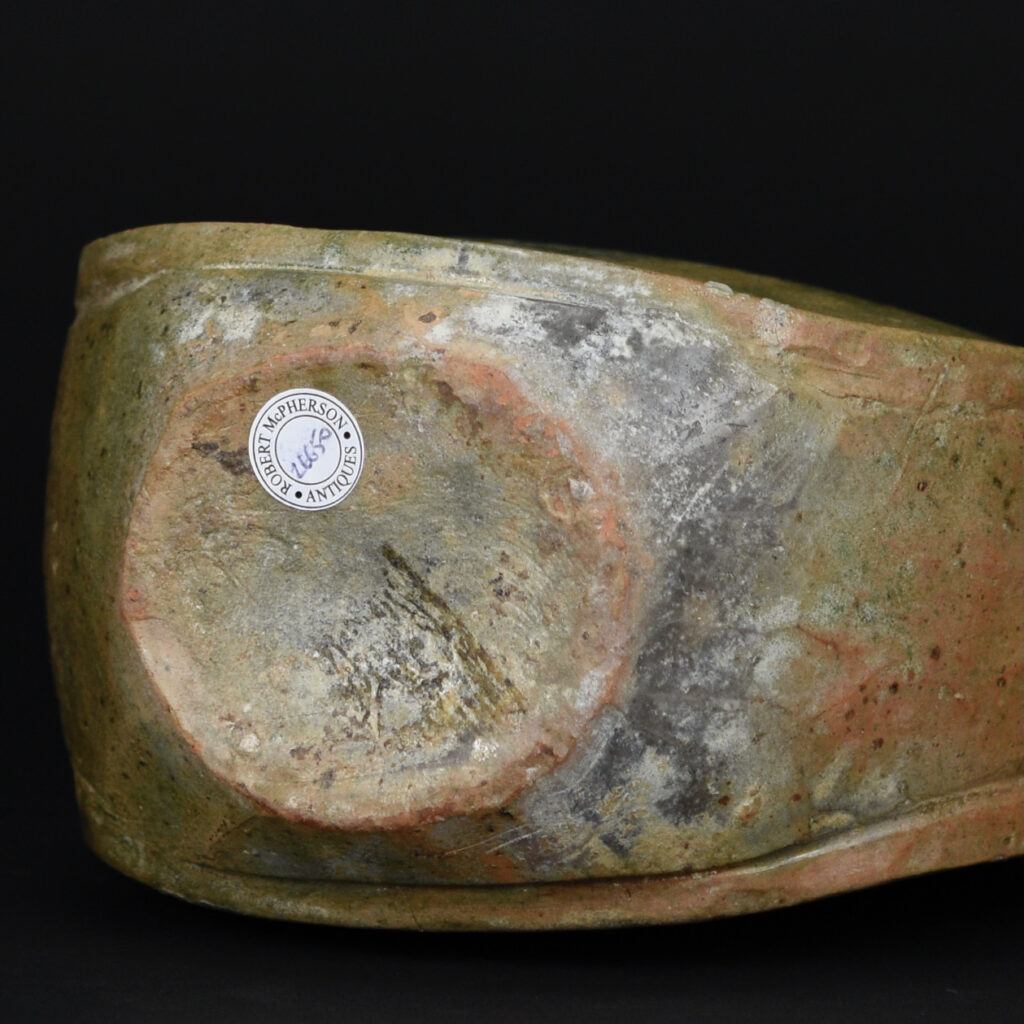 The Liao dynasty also known as the Liao Empire (officially the Great Liao), or the Khitan Empire was an empire in East Asia that ruled from 907 to 1125 over present-day Mongolia and portions of the Russian Far East, northern Korea, and northern China. The empire was founded by Abaoji, Khagan of the Khitan people around the time of the collapse of Tang China and was the first state to control all of Manchuria.

Almost immediately after its founding, the Khitan Empire began a process of territorial expansion, with Abaoji leading a successful conquest of Balhae. Later emperors would gain the Sixteen Prefectures by fueling a proxy war that led to the collapse of the Later Tang (923–936) and would establish tributary relationships with Goryeo and Song China after failing to conquer Goryeo.

Tension between traditional Khitan social and political practices and Chinese influence and customs was a defining feature of the dynasty. This tension led to a series of succession crises; Liao emperors favored the Chinese concept of primogeniture, while much of the rest of the Khitan elite supported the traditional method of succession by the strongest candidate. So different were Khitan and Chinese practices that Abaoji set up two parallel governments. The Northern Administration governed Khitan areas following traditional Khitan practices, while the Southern Administration governed areas with large non-Khitan populations, adopting traditional Chinese governmental practices.

Differences between Chinese and Khitan society included gender roles and marital practices: the Khitans took a more egalitarian view towards gender, in sharp contrast to Chinese cultural practices that segregated men’s and women’s roles. Khitan women were taught to hunt, managed family property, and held military posts. Many marriages were not arranged, women were not required to be virgins at their first marriage, and women had the right to divorce and remarry.

The Liao dynasty was destroyed by the Jurchen people of the Jin dynasty in 1125 with the capture of Emperor Tianzuo of Liao. However, the remnant Khitan, led by Yelü Dashi, established the Qara Khitai (Western Liao dynasty), which ruled over parts of Central Asia for almost a century before being conquered by the Mongols. Although cultural achievements associated with the Liao dynasty are considerable, and a number of various statuary and other artifacts exist in museums and other collections, major questions remain over the exact nature and extent of the influence of the Liao Khitan culture upon subsequent developments, such as the musical and theatrical arts.