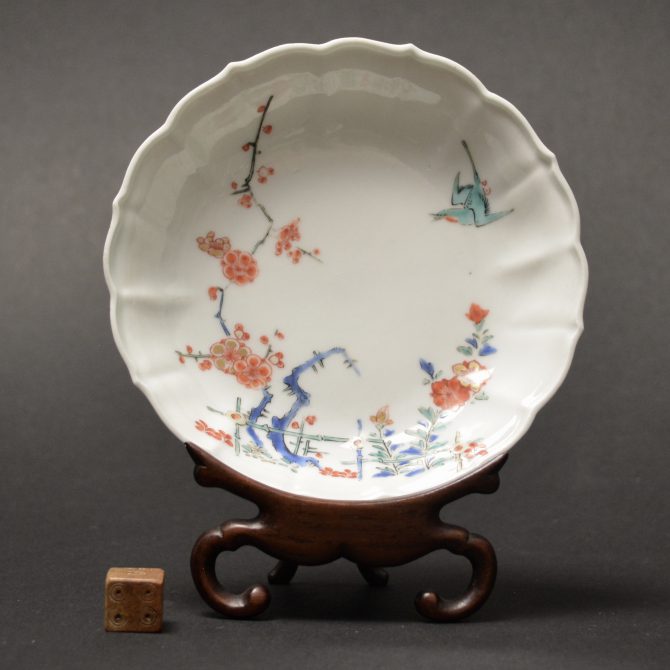 A Finely Potted 17th Century Kakiemon Porcelain Saucer from the collection of Soame Jenyns, Deputy Keeper of Asian Antiquities, British Museum (1950-1968). The lobed and barbed shaped Nigoshide (milky white) porcelain body has an everted rim. The finely drawn design is typical of Kakiemon porcelain of the period, it consists of a bird hovering over a garden. A prunus tree flowers next to an old, apparently dead, prunus tree. Other plants are in flower too, all are kept back by a delicate looking bamboo fence. A lone flying bird turns toward the scene. The base has a single stilt-mark (kiln support mark).

Condition
In perfect condition. Firing fault - some uneveness to the glaze on the back.
Size
Diameter 11.1cm (4 1/3 inches).
Provenance
Soame Jenyns, Deputy Keeper of Asian Antiquities, British Museum (1950-1968) and thence by decent. Mr. Roger Soame Jenyns (1904-1976) was the foremost scholar of his generation in the arts of Japan and China. He was a discerning collector and a member of the British General Committee of the Royal Academy Exhibition 1935-1956. His books include Later Chinese Ceramics (1951) Ming Pottery and Porcelain (1953) Wares of the Transitional Period between Ming and the Ch'ing 1620-1683 (1955) Japanese Porcelain (1965) Japanese Pottery (1971) and (with Margaret Jourdain) Chinese Export Art in the Eighteenth Century (1950). For more information see : Provenance ; Collectors, Dealers & Scholars : Chinese Ceramics in Britain & America (Roy Davids, Dominic Jellinek, Privately Printed, 2011. ISBN 978-0-9570148-0-0).
Stock number
25791 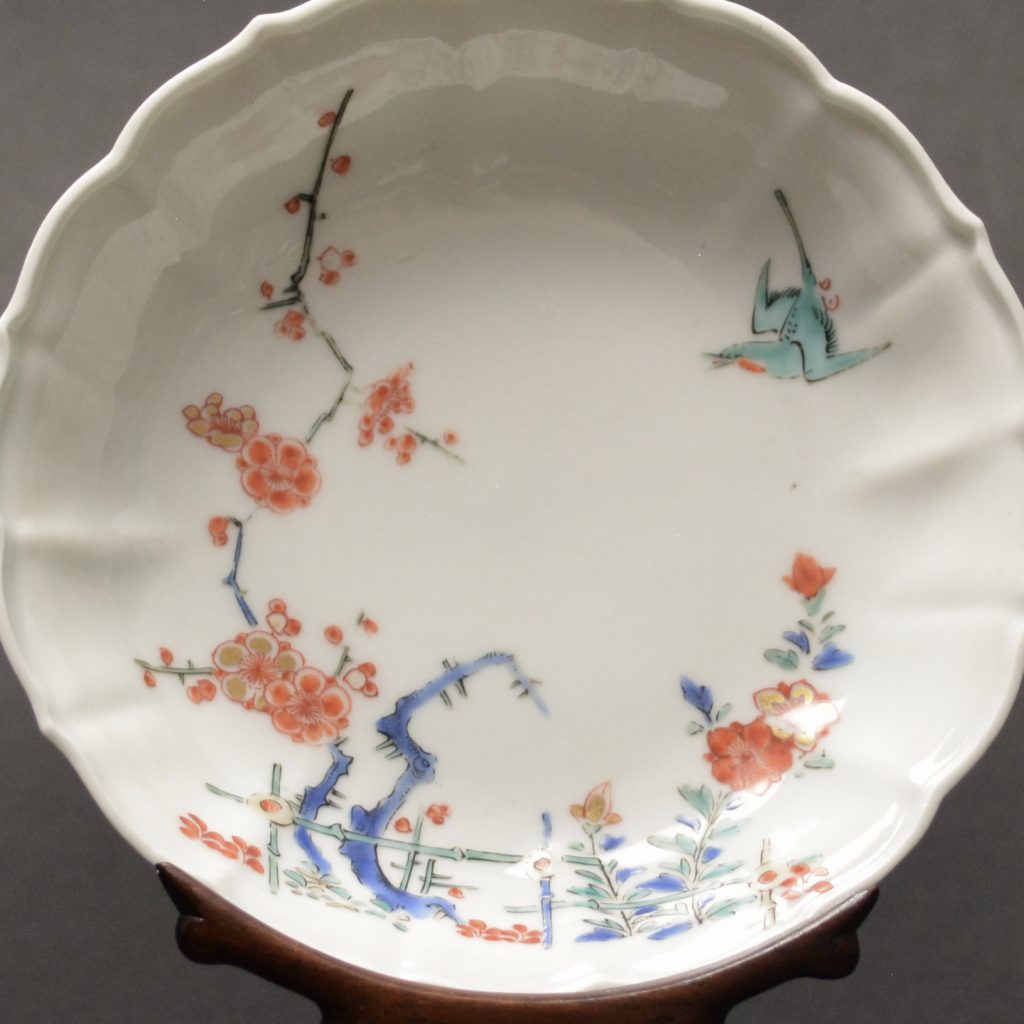 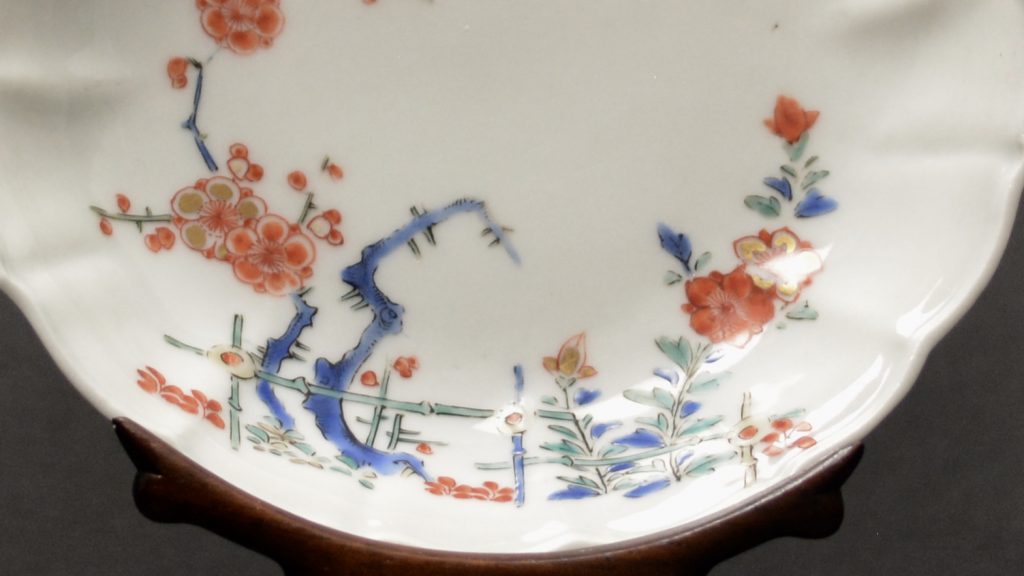 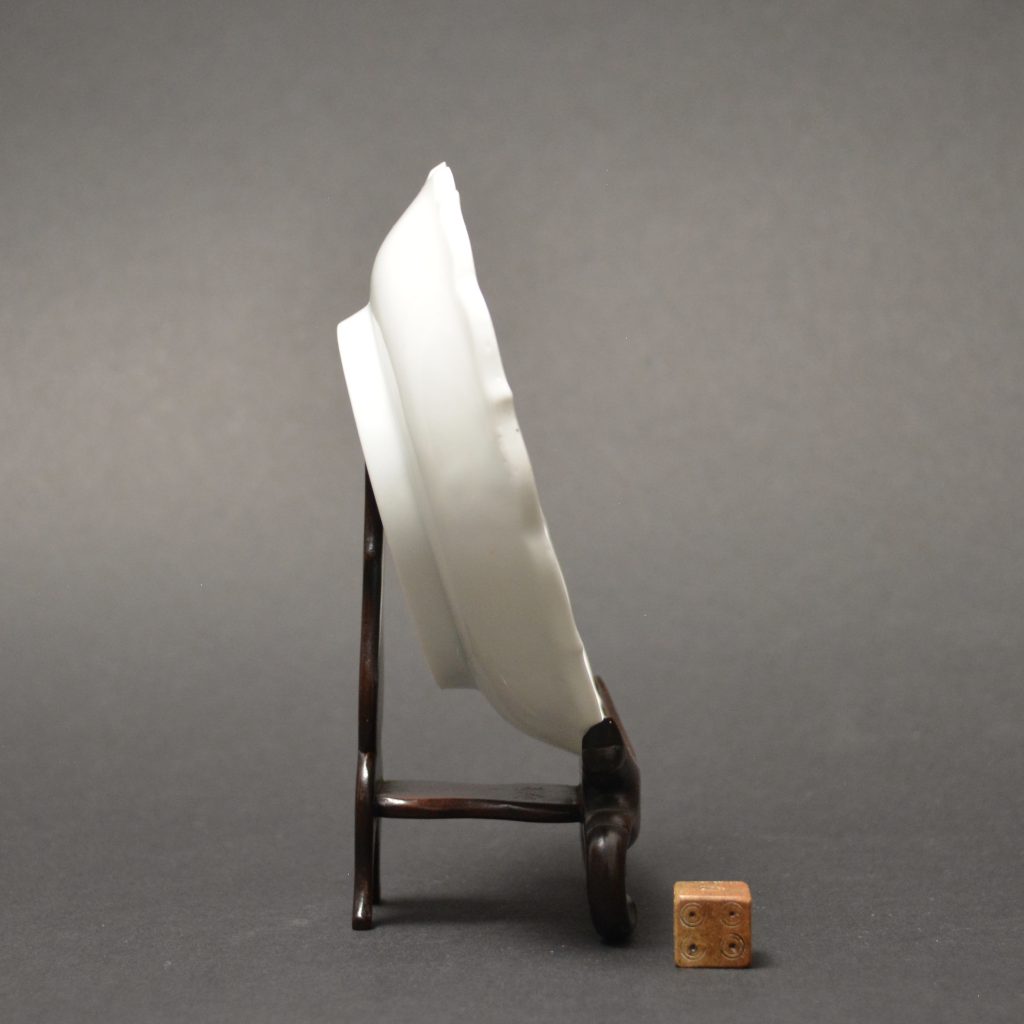 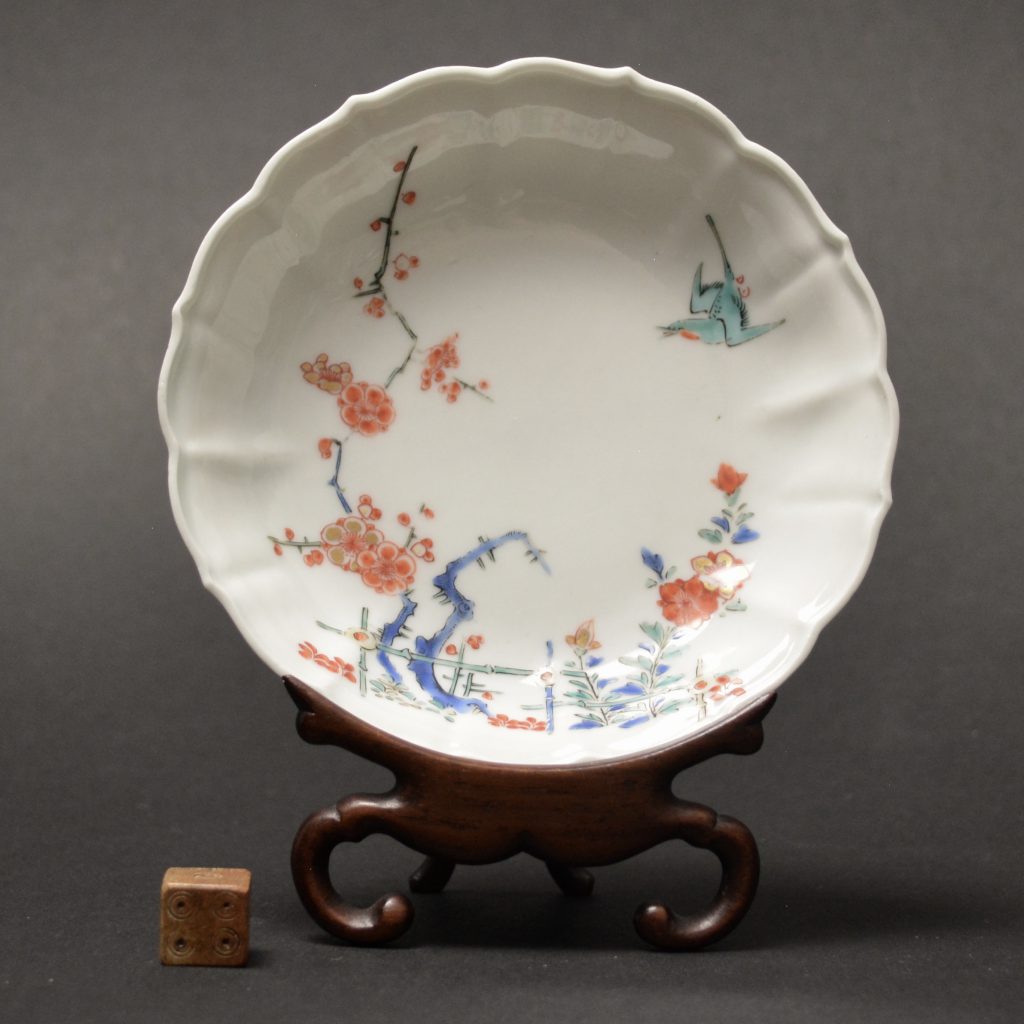 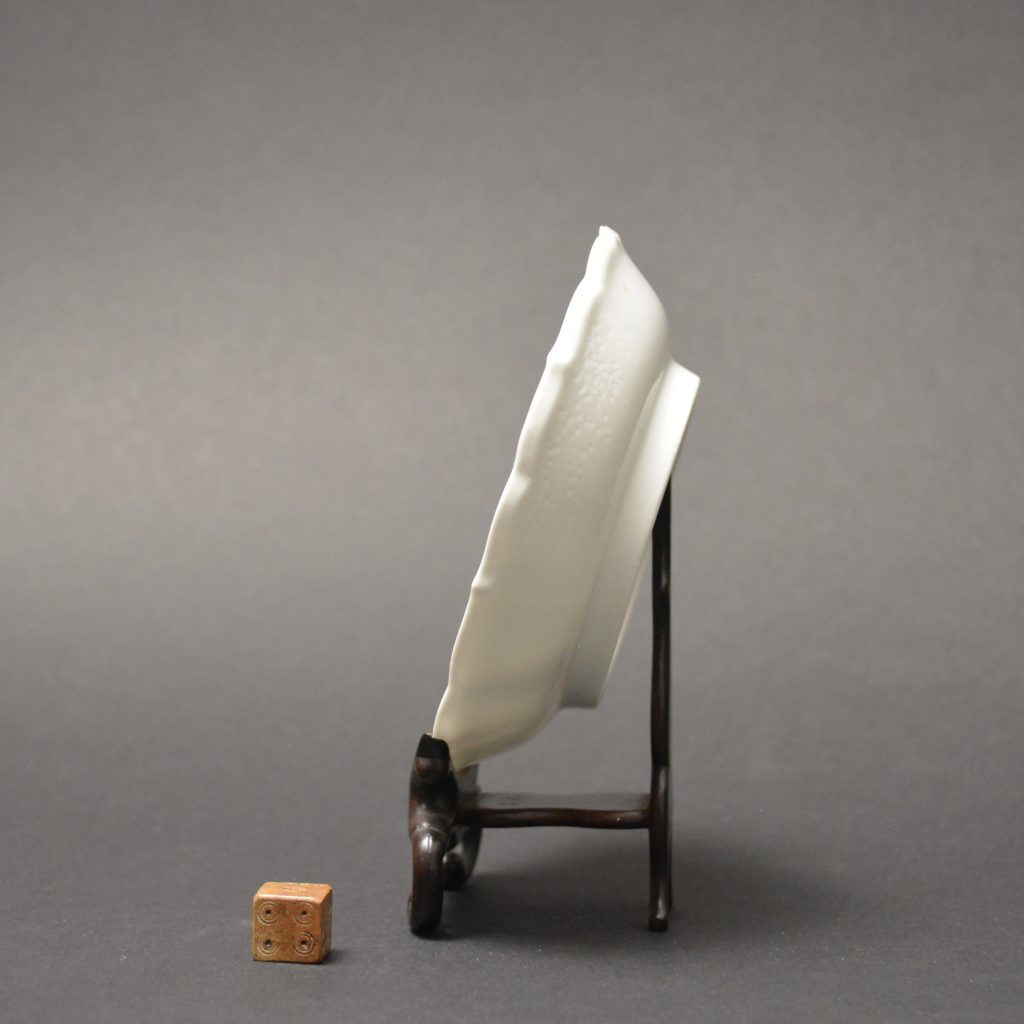 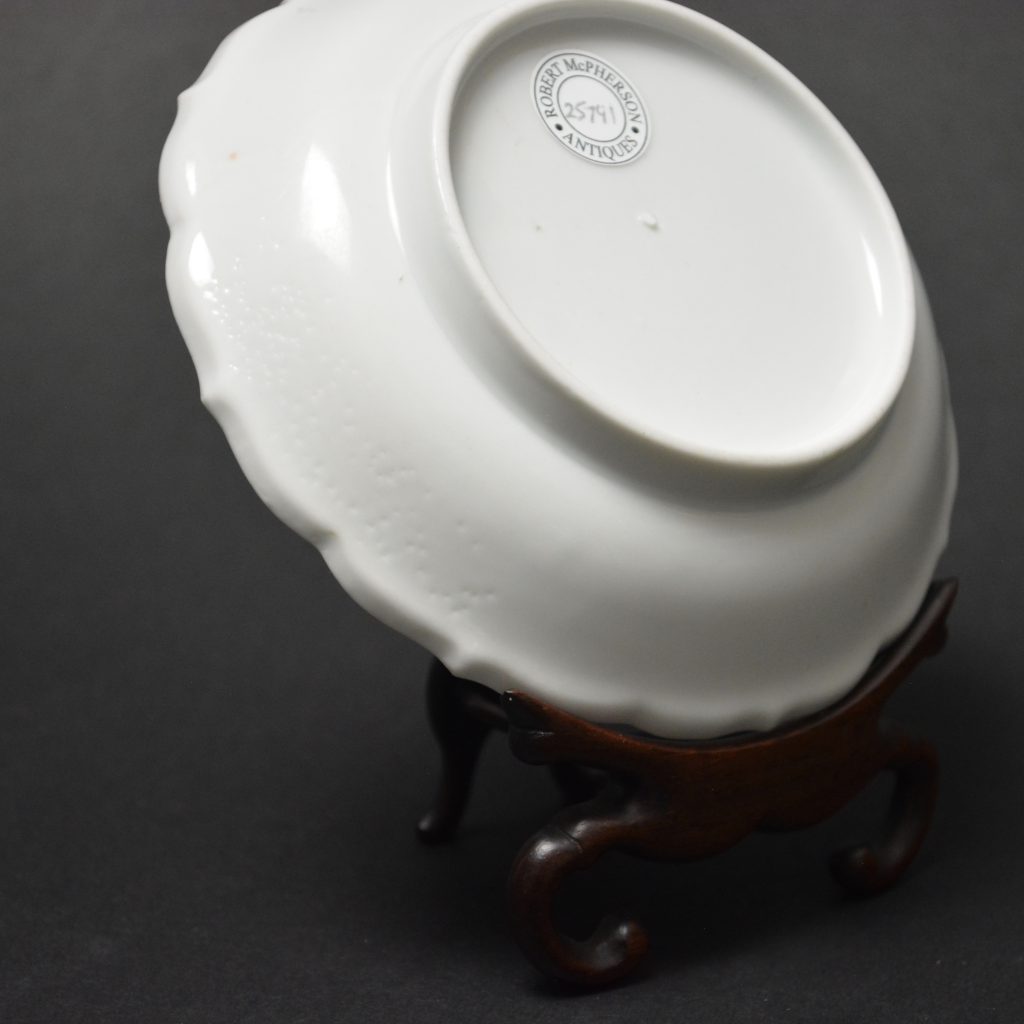 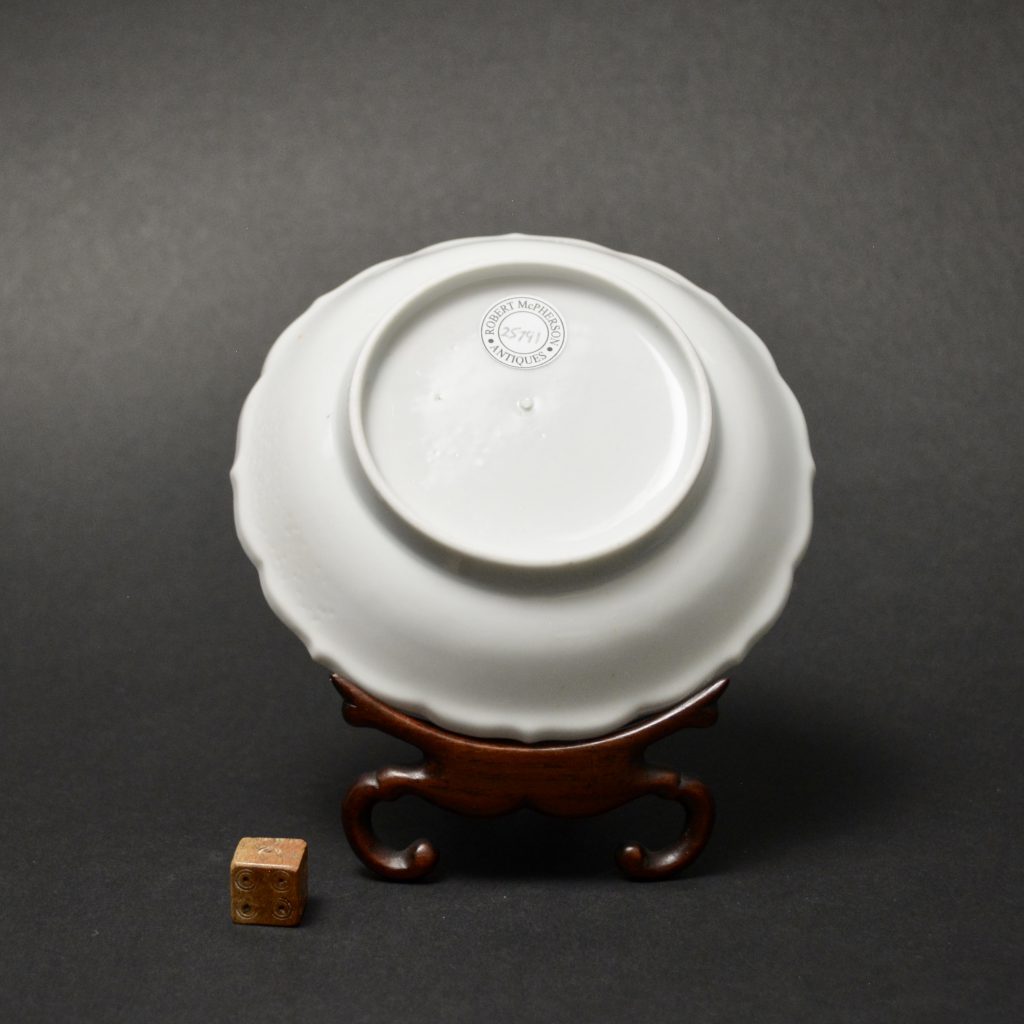 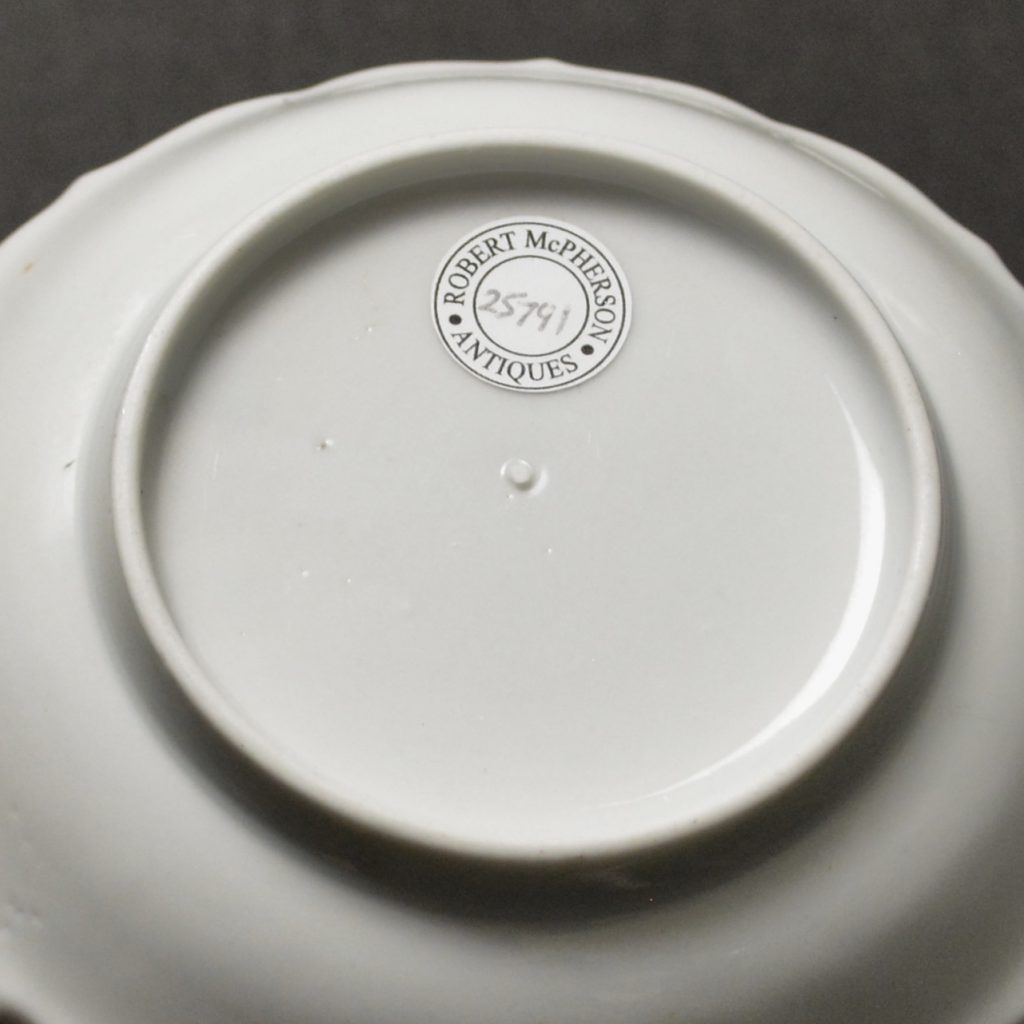 Kakiemon Porcelain
Kakiemon decoration is usually of high quality, often delicate and with well-balanced asymmetric designs. The designs were normally quite sparse emphasizing the fine white porcelain body known in Japan as Nigoshide (milky white). The opaque white milky Nigoshide body was used on the finest pieces, it appears that it was reserved for fine quality enamelled decoration. Kakiemon porcelain was decorated with a great variety of imaginative designs which include elements such as the `banded hedge`, `flying squirrel`, and the `Quail and Millet` design. The `Three Friends of Winter` were also a very popular group of designs, other subject taken from nature include flowers (especially the chrysanthemum, the national flower of Japan) as well as birds and rock-work. Figural subjects such as the `Hob in the Well` were also popular. This design illustrates a Chinese folk tale where a sage saves his friend who has fallen into a large fish-bowl by throwing stones at it, braking open the pot. Banded-Hedges were a formal device within Japanese traditional gardens, they were often incorporated in designs, includes `The Three Friends of Winter` (Pine, Bamboo and Prunus). These three plants signify perseverance, as neither the pine nor the bamboo shed their leaves in winter and the plumb (Prunus) flowers at the very end of the winter, heralding the arrival of spring.

Nigoshide Body
The Nigoshide (milky white) body was a new whiter porcelain body introduced between about 1660 – 1680, solely for use on Kakiemon Wares. Indeed the Kakiemon Palette evolved at the same time. It has recently been proposed that the Nigoshide Body is not a new body at all, rather it is just made from a clay that has been levigated and washed more thoroughly.