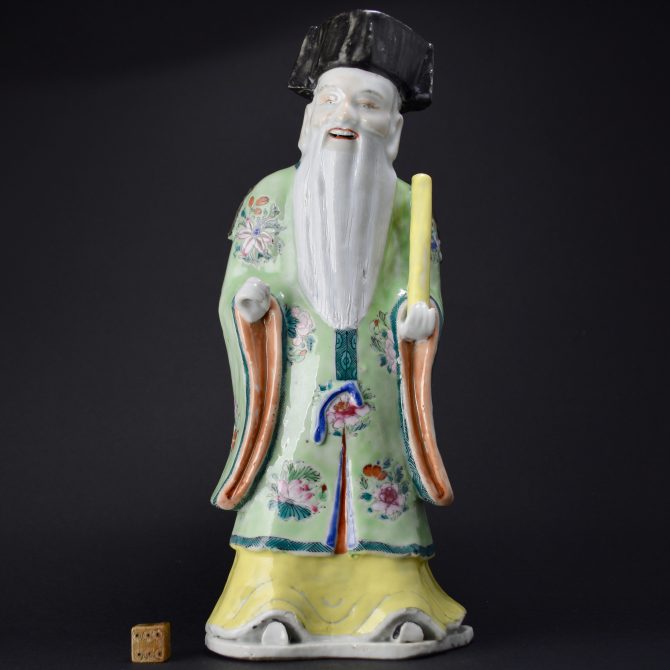 A Chinese export porcelain figure of the Immortal Zhang Guolao, Qianlong period c.1750-1770. This Chinese porcelain figure is painted with bright thick Famille Rose enamels including white enamel for the beard, a pale green tunic and a yellow fish-drum. His emblem is a fish-drum, which is a tube-shaped bamboo drum with two iron rods or mallets that he carries with him, in other depictions of  Zhang Guolao he carrys a phoenix feather or a peach, representing immortality. 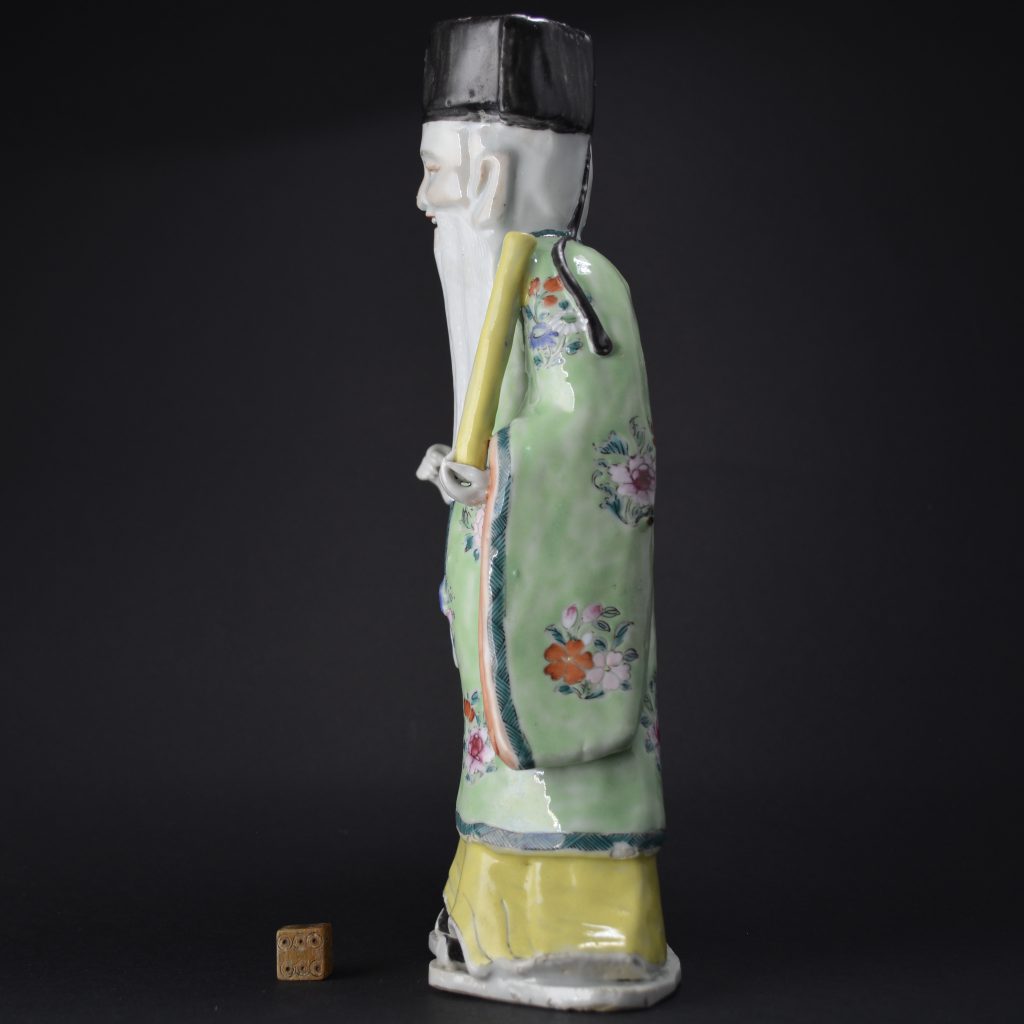 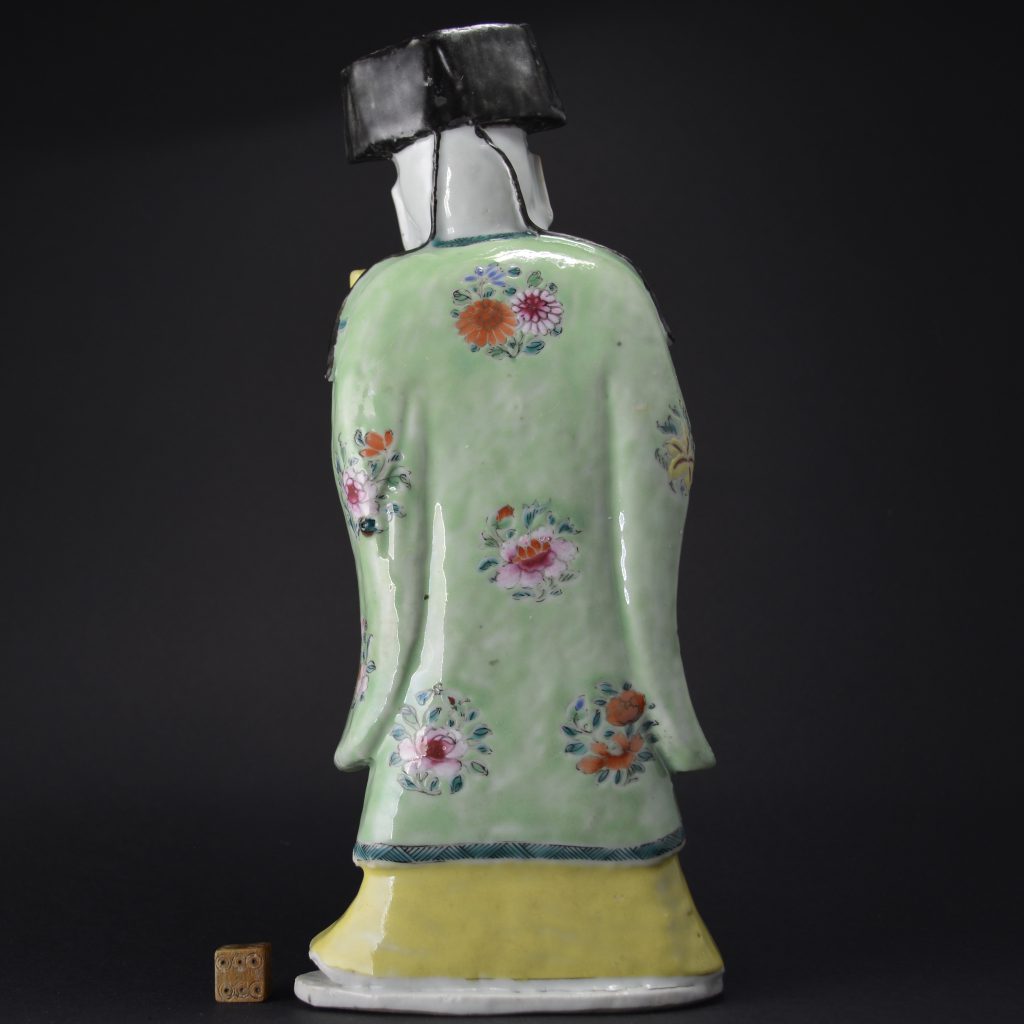 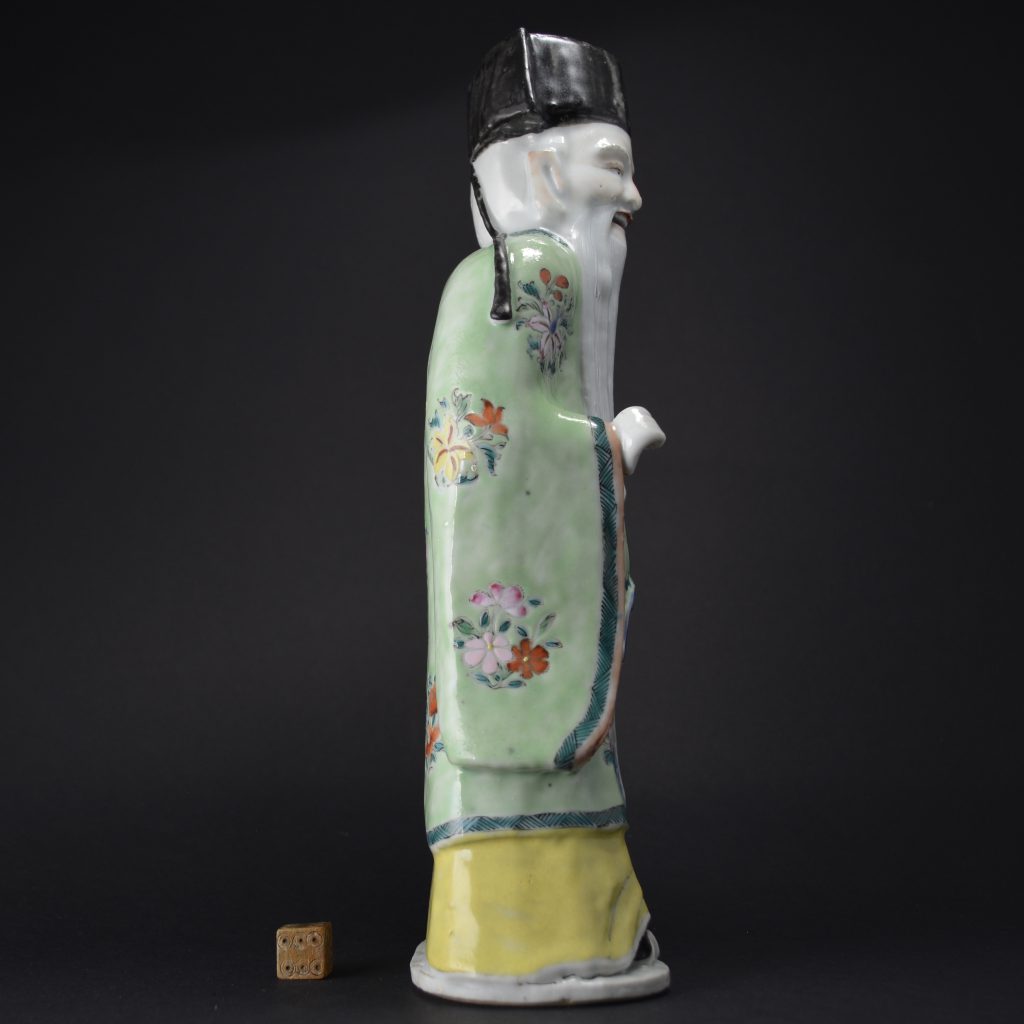 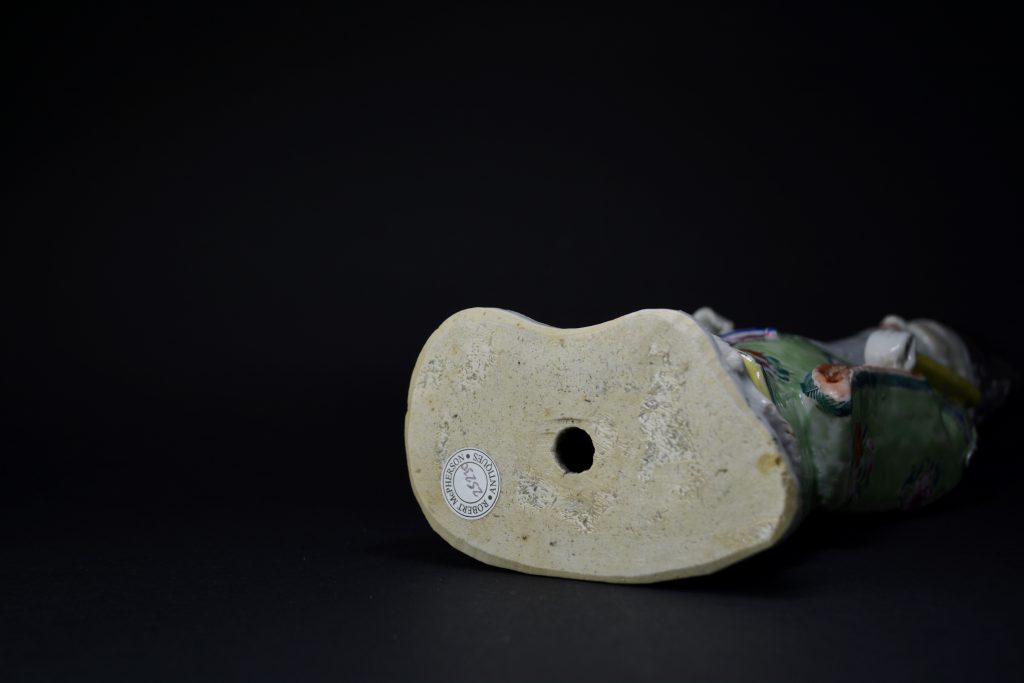 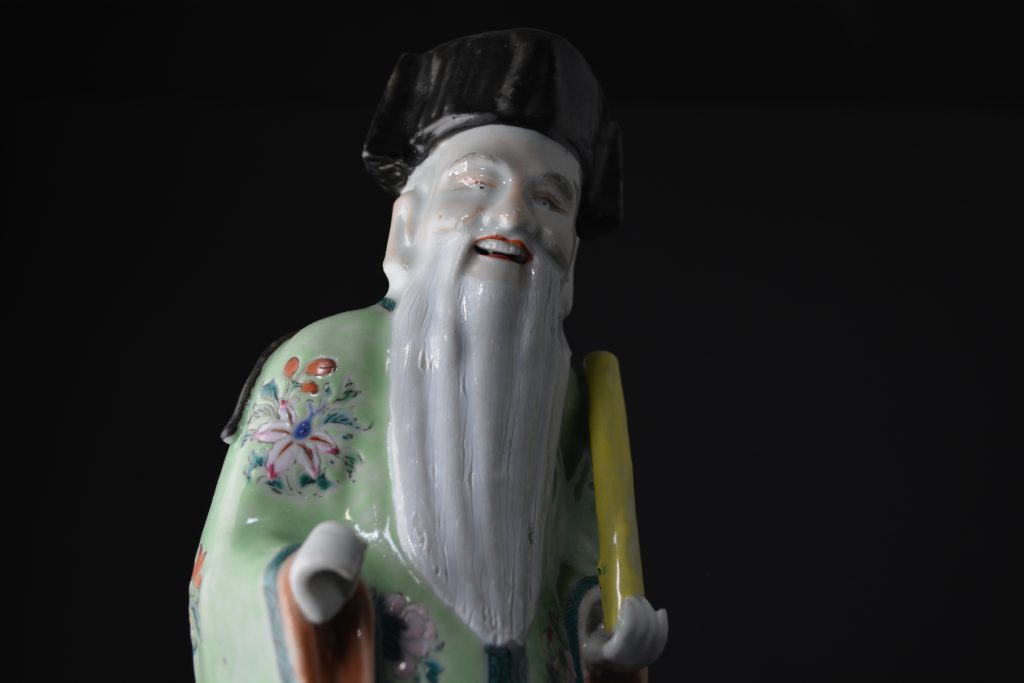 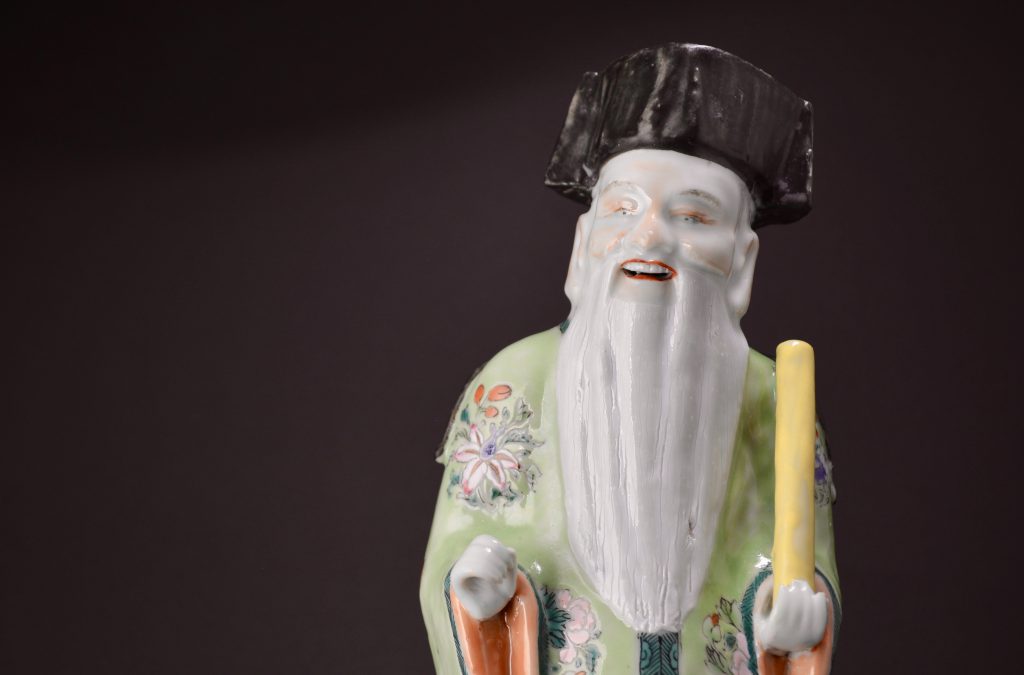 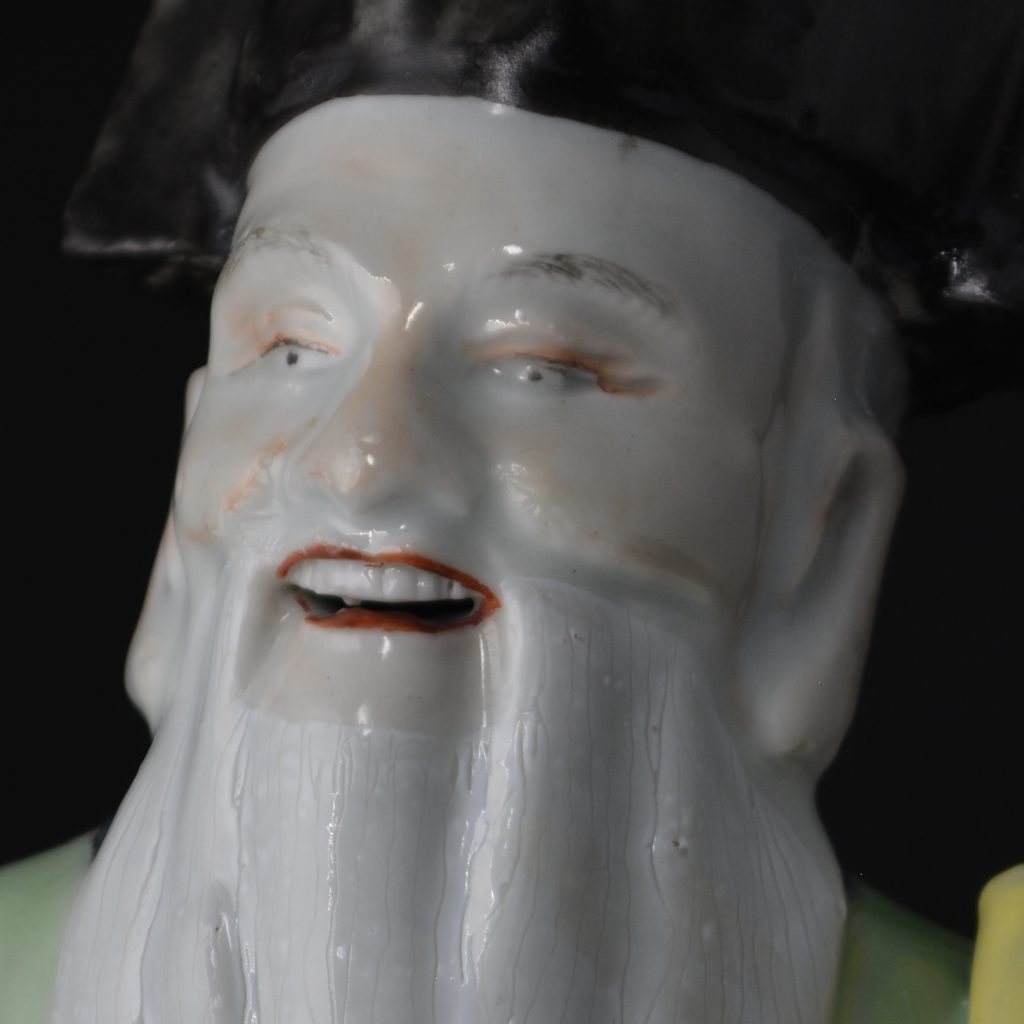 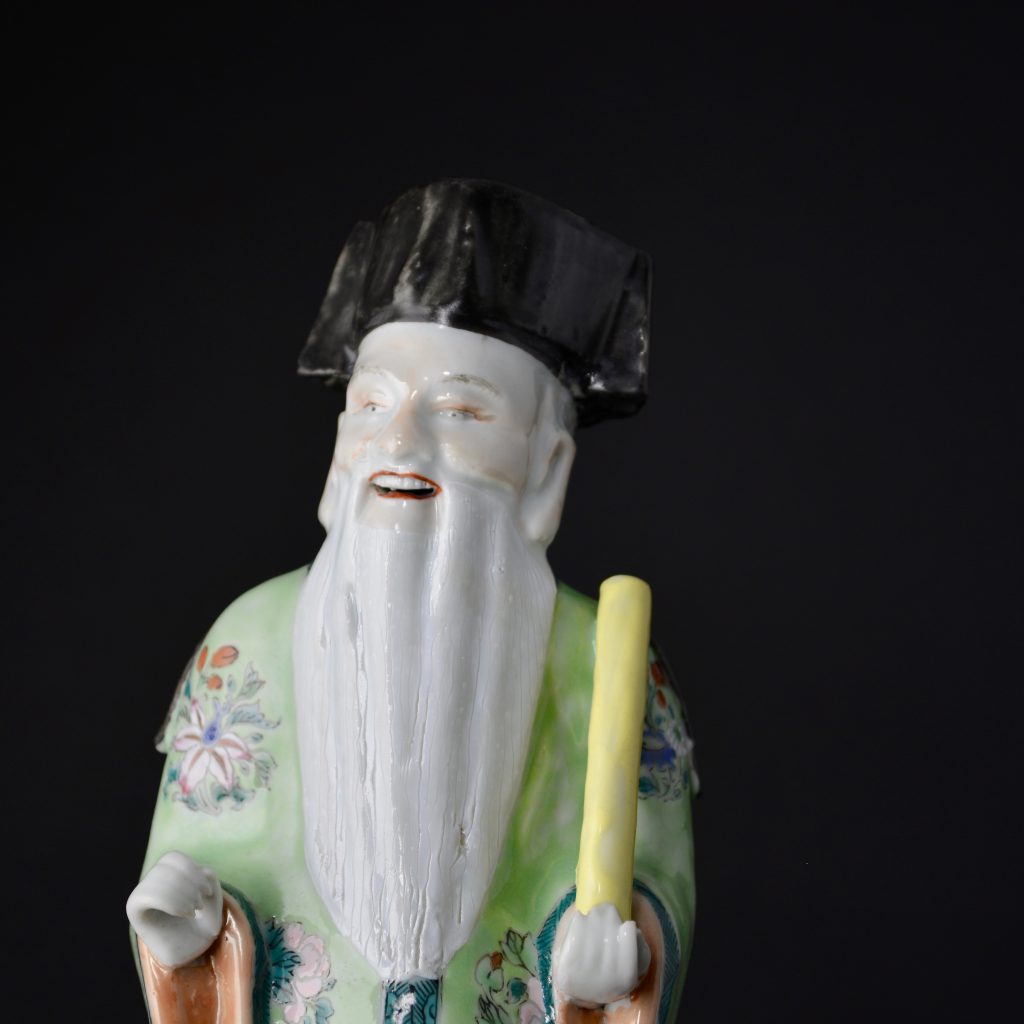 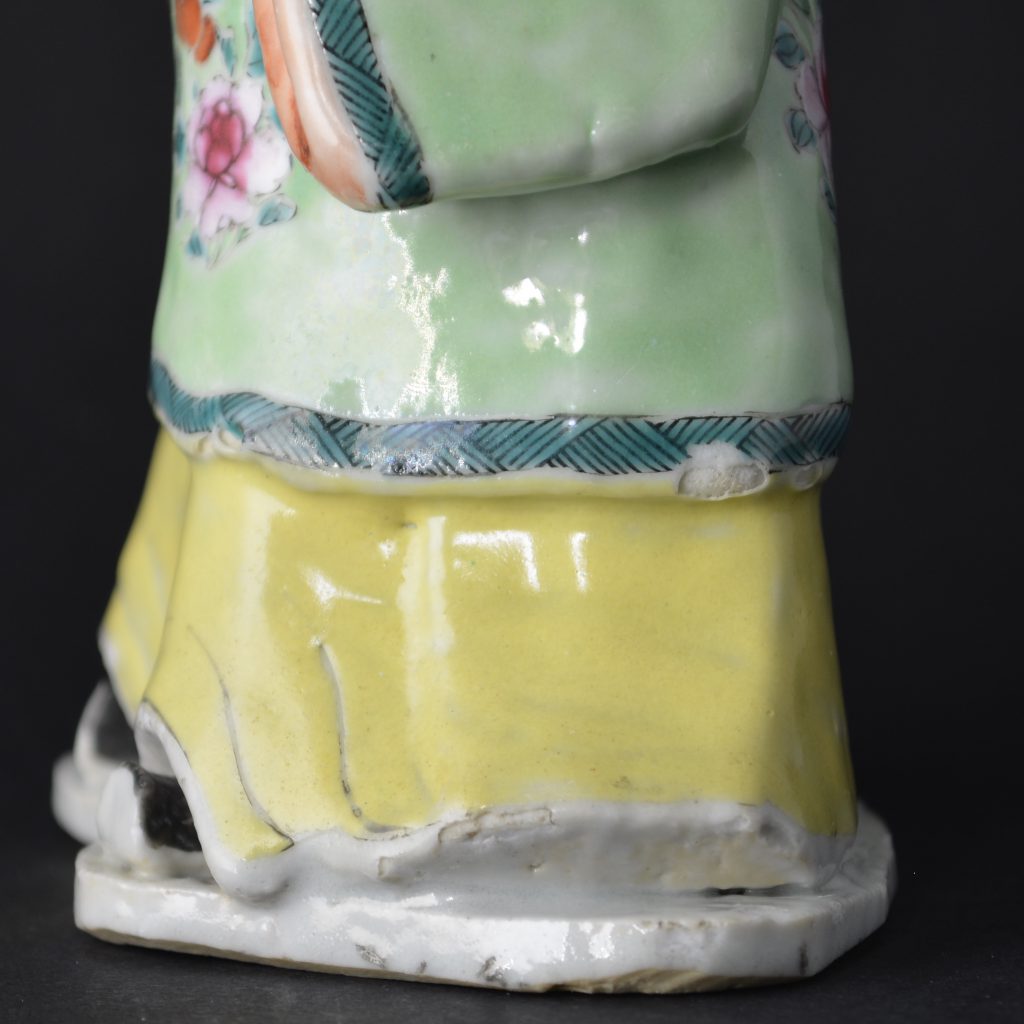 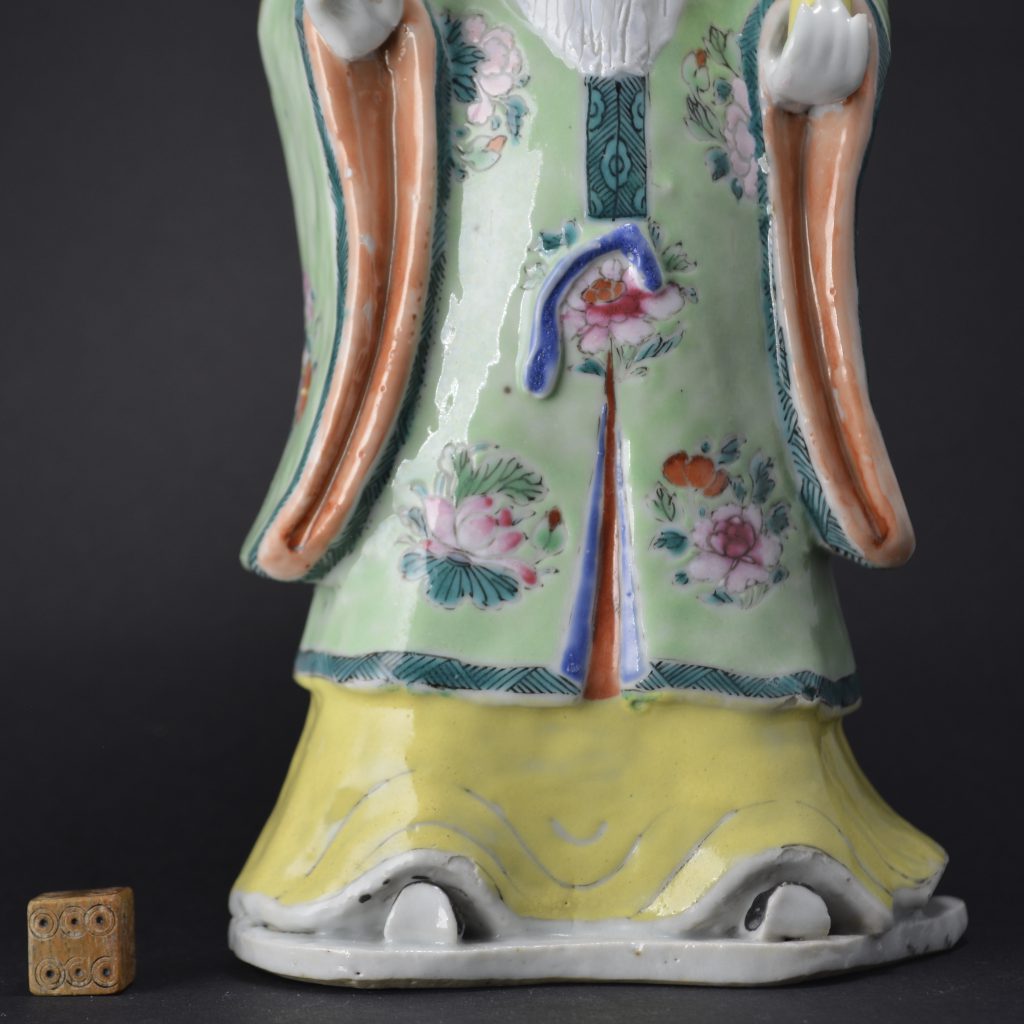 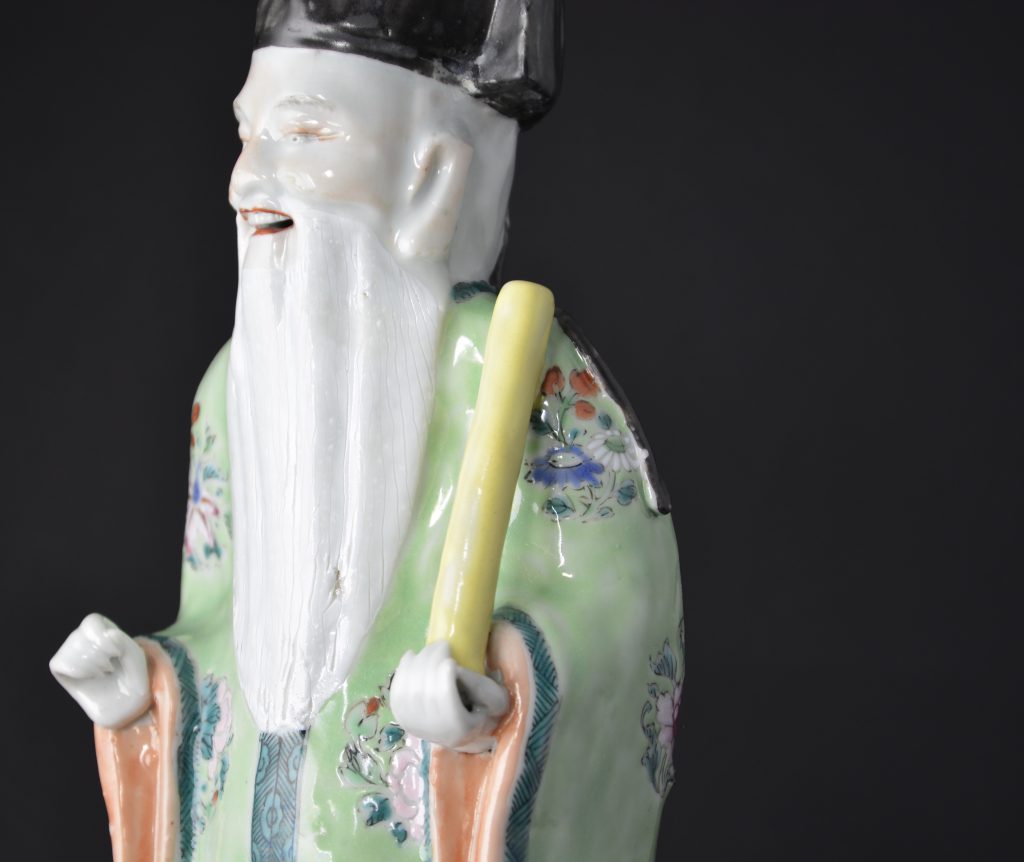 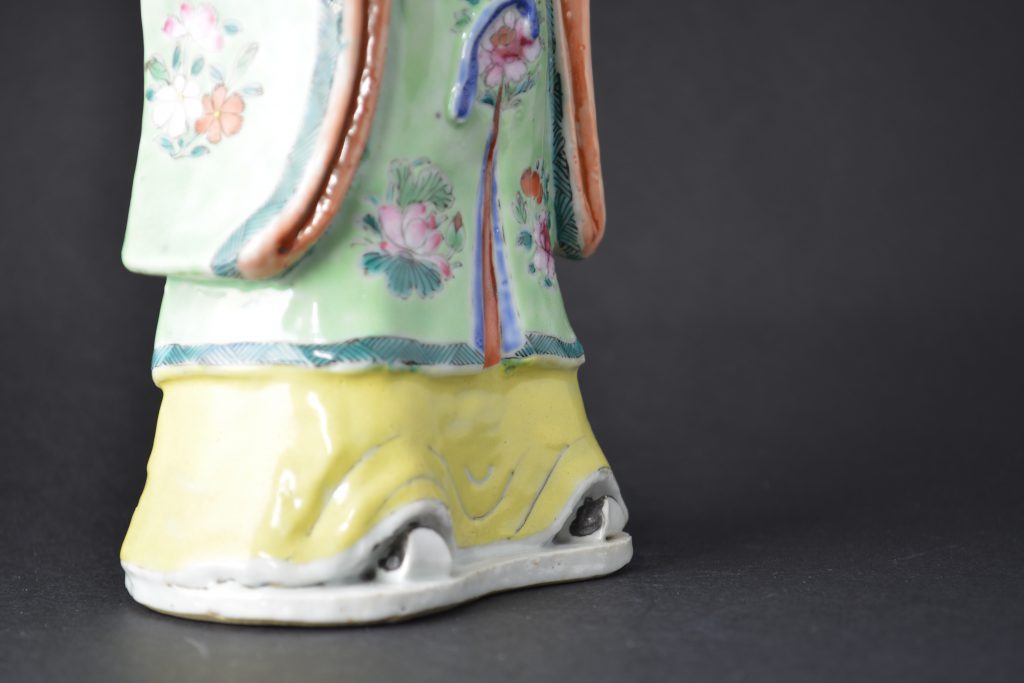 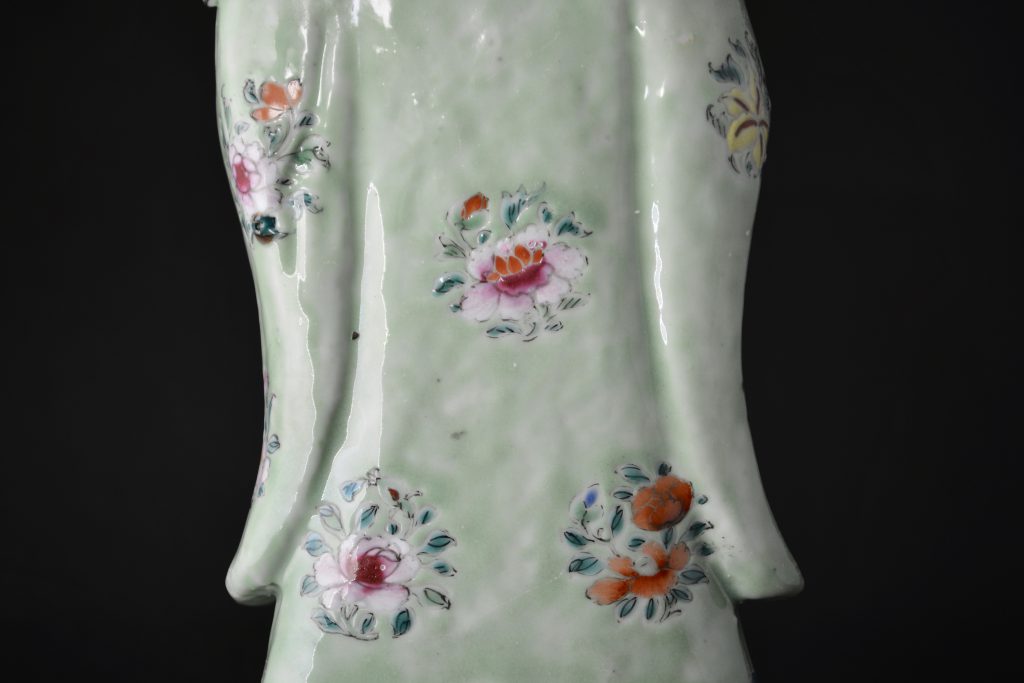 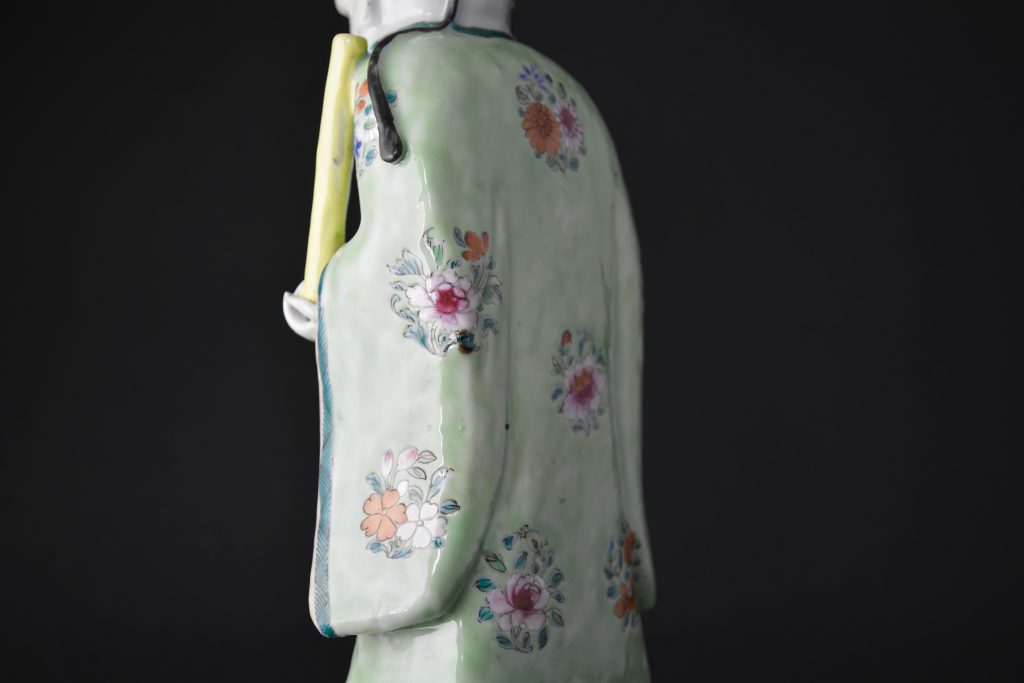 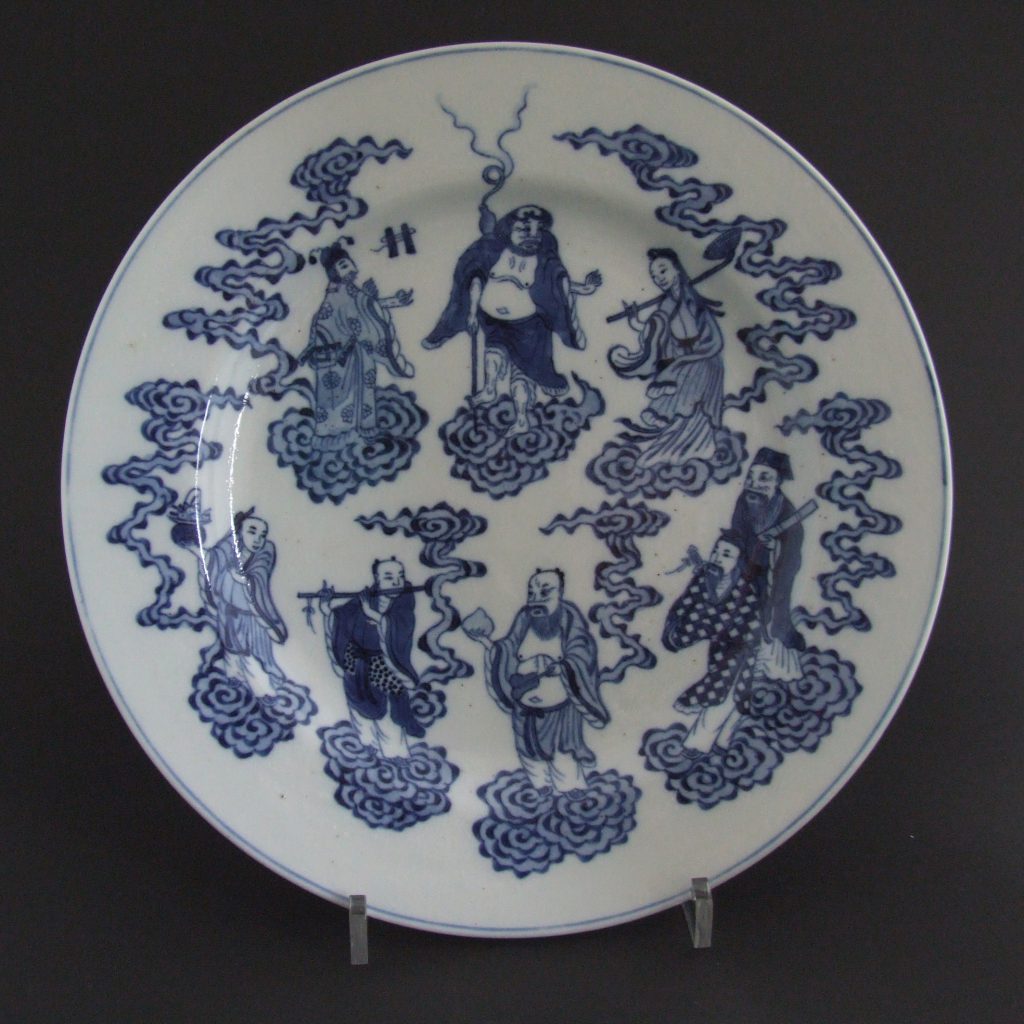 Zhang was a Taoist fangshi (translated as "occultist-alchemist") who lived as a hermit on Zhongtiao Mountain (southeast of present-day Yongji, Shanxi) in Hengzhou during the Tang dynasty. By the time Wu Zetian (624 – 705) came to power, he claimed to be several hundred years old. A strong believer in the magic of necromancy, he also declared that he was a Grand Minister to the mythical Emperor Yao in his previous life. Zhang also had a love for wine and winemaking. He was known to make liquor from herbs and shrubs as a hobby. Other members of the Eight Immortals drank his wine, which they believed to have healing or medicinal properties. He was also known to be a master of qigong and could go without food for days, surviving on only a few sips of wine. Zhang was the most eccentric of the Eight Immortals, seen clearly in the style of Chinese martial arts dedicated to his memory. The style includes moves such as delivering a kick during a backflip or bending so far back that your shoulders touch the ground. He was known to be quite entertaining, often making himself invisible, drinking water from the petals of poisonous flowers, snatching birds in flight from the sky, as well as wilting flowers simply by pointing in their direction.

Zhang was known for wandering between the Fen River and Qin territories during his lifetime and was known to travel at least a thousand li per day on a white donkey or mule. When his journey was finished, he folded his mule up and placed it in his pocket or a small box. When he wished to use the mule again, he poured water on it from his mouth and the mule regained its form. The Tang dynasty emperors Taizong and Gaozong often invited Zhang to their imperial courts, but he always declined these invitations. Once, when asked by Wu Zetian, he finally agreed to leave his hermitage. As he reached the gate of the Temple of the Jealous Woman, he died suddenly. His body was seen decomposing and being consumed by worms, but he was later seen, alive and well, on Zhongtiao Mountain in Hengzhou.

In 735, during the reign of Emperor Xuanzong of the Tang dynasty, Zhang was called to Luoyang, where he was elected as the chief of the Imperial Academy, with the honorable title "Very Perspicacious Teacher". At this time, the Taoist Ye Fashan was highly favoured in the imperial court, thanks to his skill in necromancy. When asked who Zhang Guolao was, Ye replied, "I know, but if I were to tell your Majesty, I should fall dead at your feet, so I dare not speak unless your Majesty will promise that you will go barefooted and bareheaded to ask Zhang to forgive you, in which case I should immediately revive."

Having been promised by Emperor Xuanzong, Ye Fashan then said: "Zhang Guolao is a white spiritual bat which came out of primeval chaos." Zhang was believed by some to be able to transform himself into a bat, another symbol of permanence. After giving this information, Ye immediately dropped dead at the emperor's feet. Emperor Xuanzong, with bald head and feet, went to Zhang as he had promised. After the emperor begged Zhang for forgiveness for his indiscretion, Zhang then sprinkled water on Ye's face and he revived. Soon after, between 742–746, Zhang fell ill and returned to die on Zhongtiao Mountain in Hengzhou. When his apprentices opened his tomb, they found it empty. (From Wikipedia - abridged and edited).