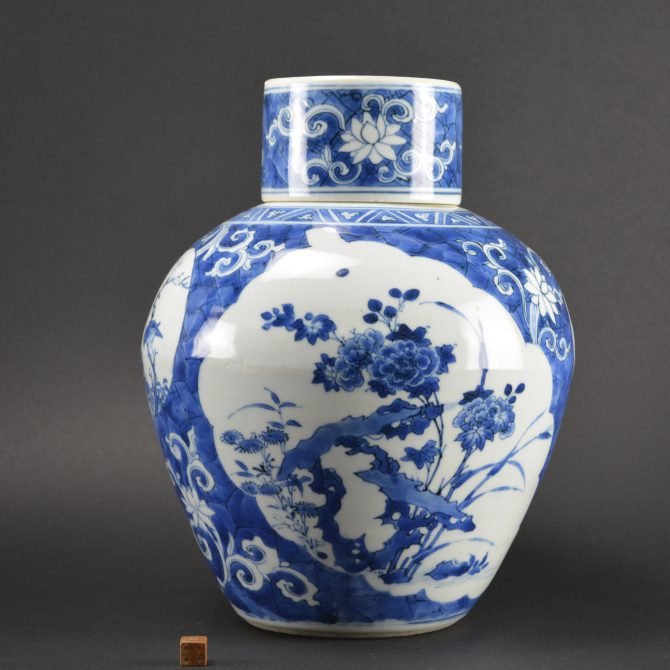 A Fine Quality Late Ming Blue and White Jar and Cover, Chongzhen Period (1627 – 1644). This Transitional blue and white porcelain jar and cover is very similar to one in a painting of 1669 by the Dutch artist William Kalf (see references below the photographs). This sturdy High Transitional Porcelain jar with its deep cover is typical of high quality porcelain imported by the V.O.C. Verenigde Oost-Indische Compagnie at this period. The heavily potted ovoid porcelain jar has a tall neck which has the glazed wiped clean around the collar, so the high flat cover can fit over the neck and rest on unglazed porcelain, thus preventing chipping. The neck is waisted and the top is unglazed. The flat base is unglazed as is typical with this type of Transitional jar. The main designs is formed of two large leaf-shaped reserves. One of which is of peony and another flowering plant with grasses among a scholar’s rock. The other side is decorated with what appears to be a flowering prunus with other flowers and an insect. These main designs are separated by two smaller panels, one on each side. One of the smaller panels is almost circular with a bird on a branch with bamboo and grass, perhaps a winters scene. The other side has a small oval panel with flowering prunus and pine. All four panels are set against a blue cracked-ice ground which is punctuated by stylised flowering scrolling lotus.

Condition
In excellent condition, no damage. Firing fault - the central lutting line shows slightly, far less than it appears in the photographs. There is a minor firing fault to the rim.
Size
Height 28 cm (11 inches)
Provenance
An old label to the base dates the jar as K'ang Hsi (Kangxi) and says where was purchased (I cannot work out exactly what it says) on the 17th of May 1976. Hong Kong private collection, Woolley and Wallis Auction 15th July 2006.
Stock number
25779
References
For similar Transitional Porcelain Jars of this type see : Christie's Amsterdam, Fine and Important Late Ming And Transitional Porcelain, Recently Recovered from an Asian Vessel in the South China Sea. Property of Captain Michael Hatcher. Christie`s Amsterdam 14th March 1984. 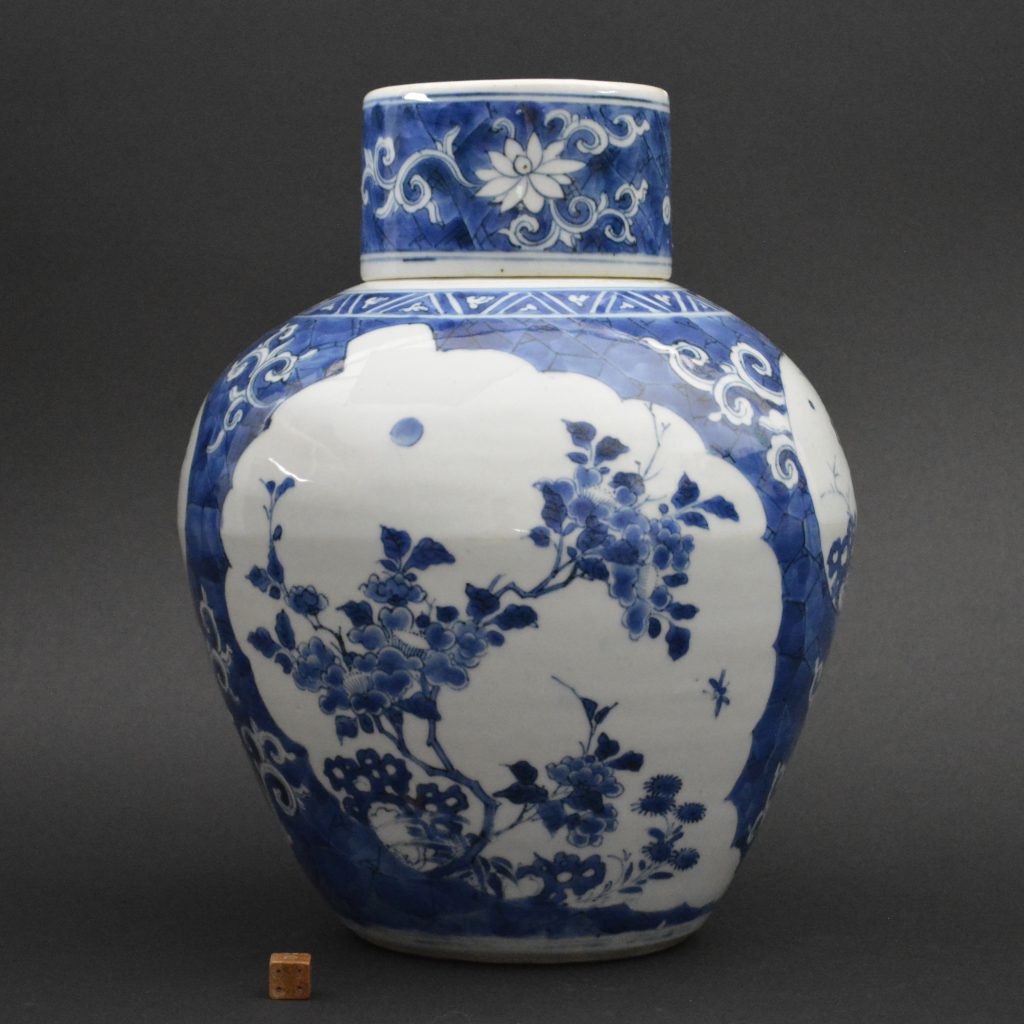 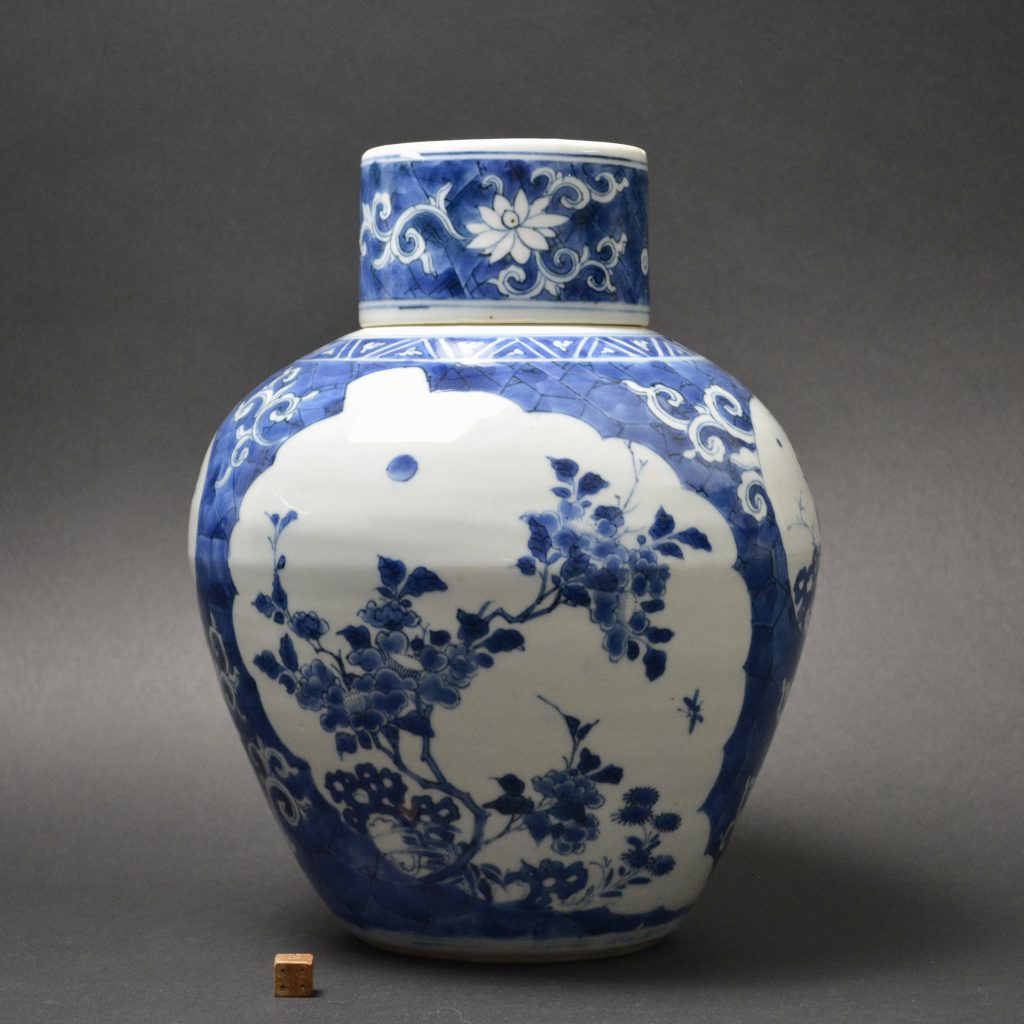 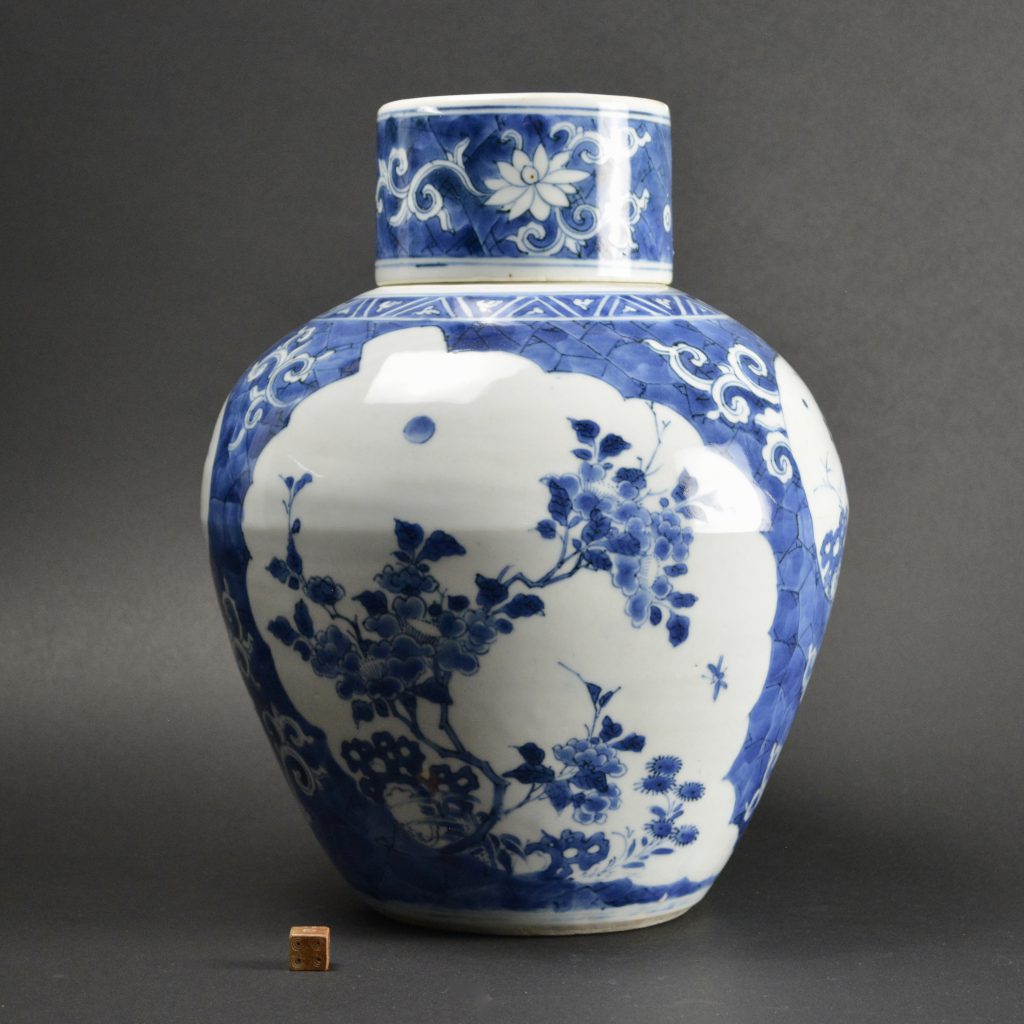 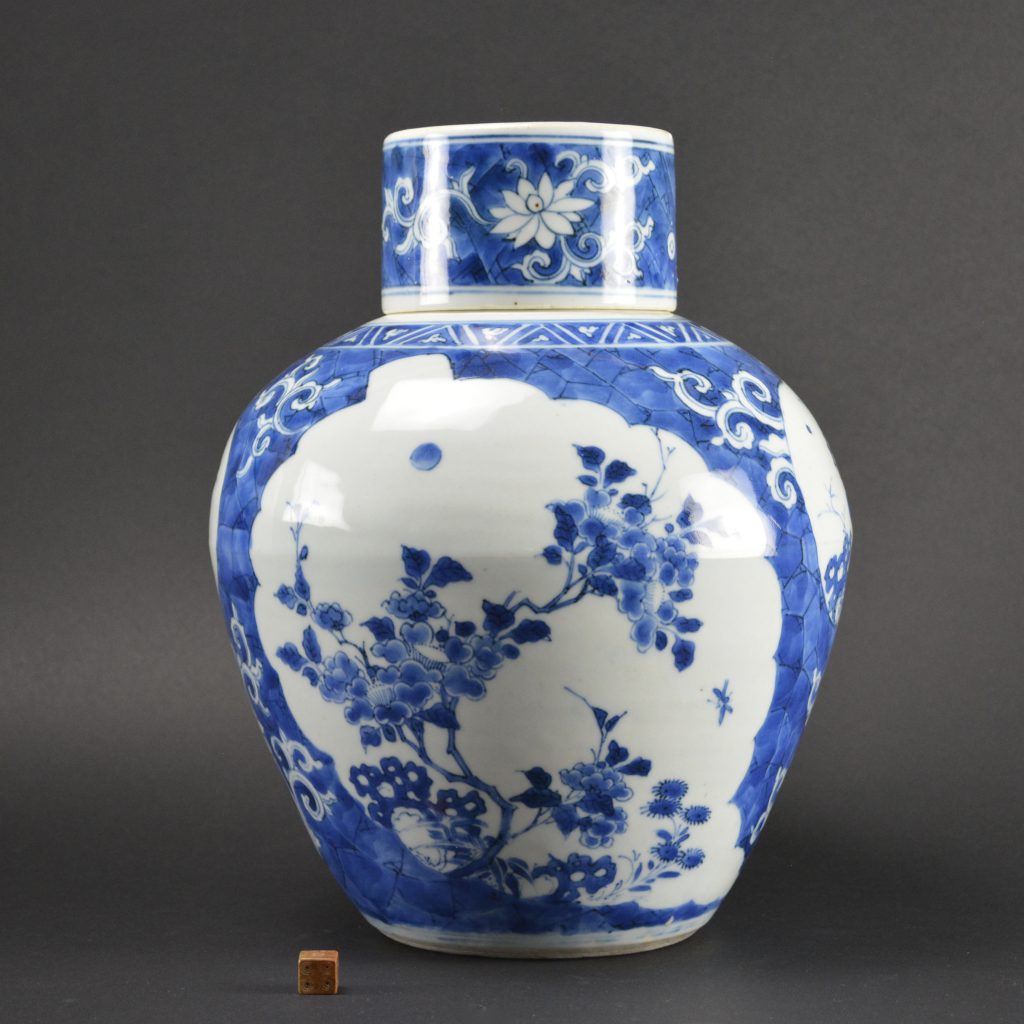 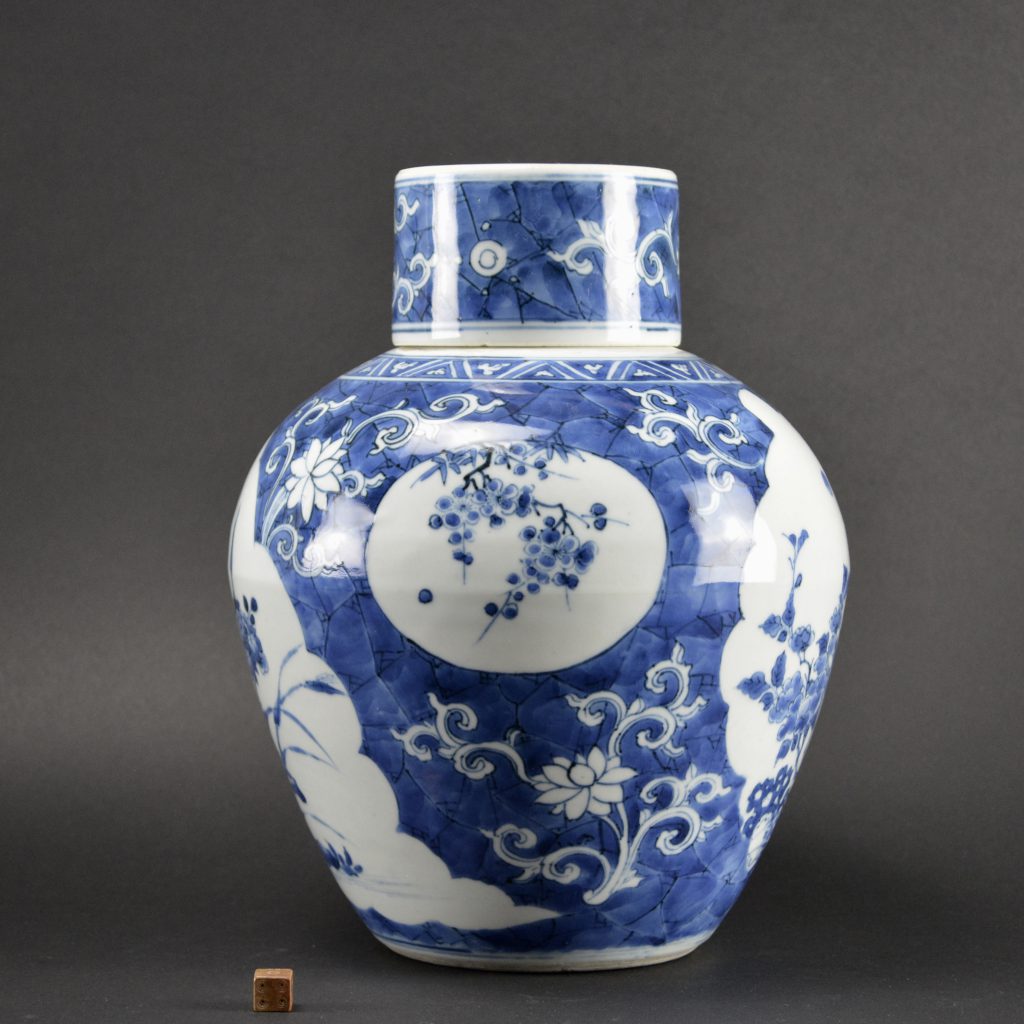 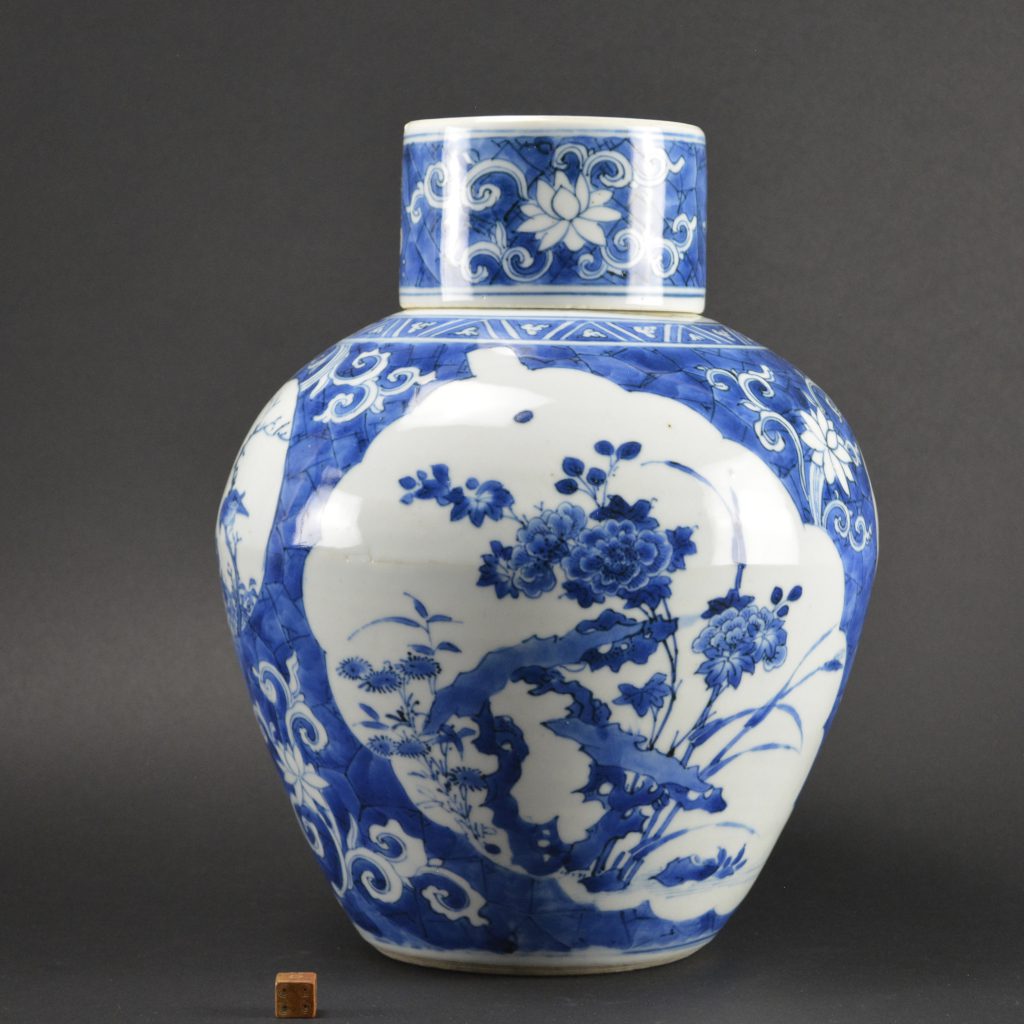 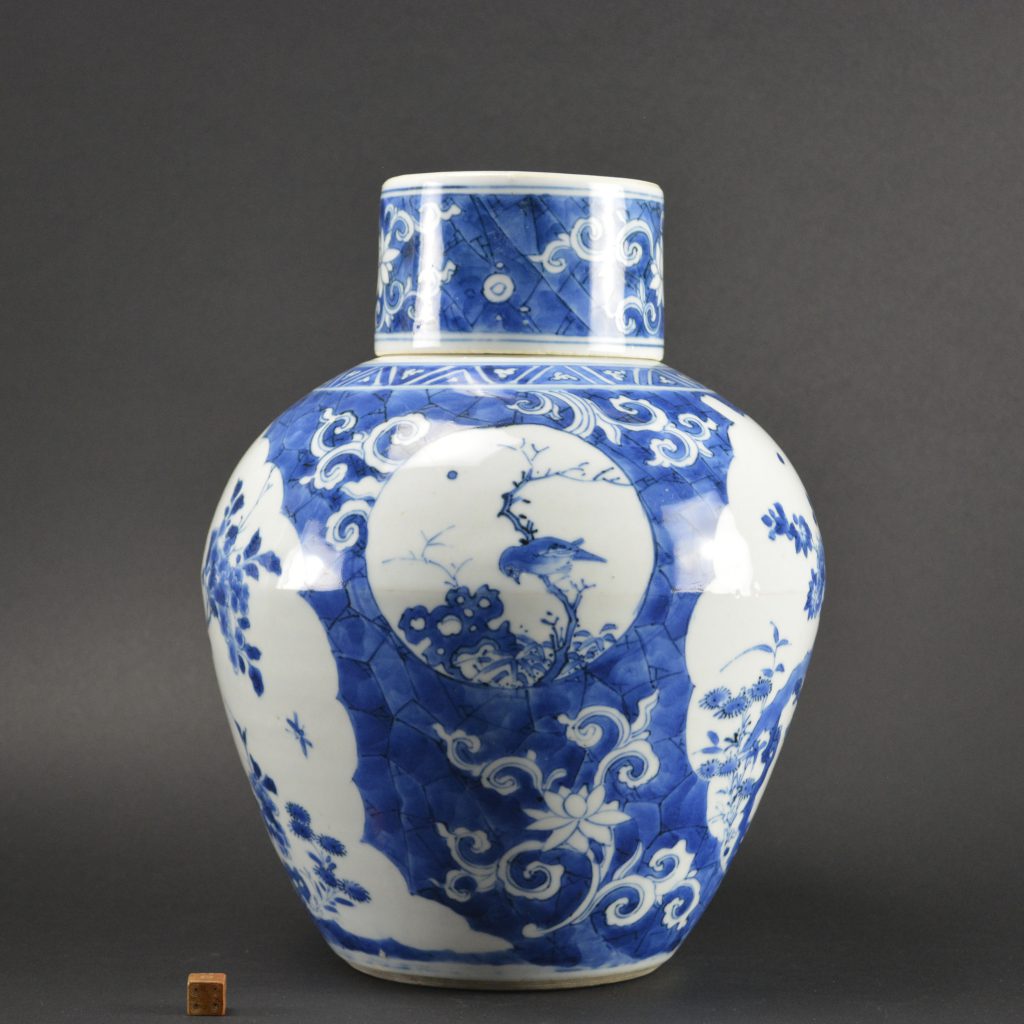 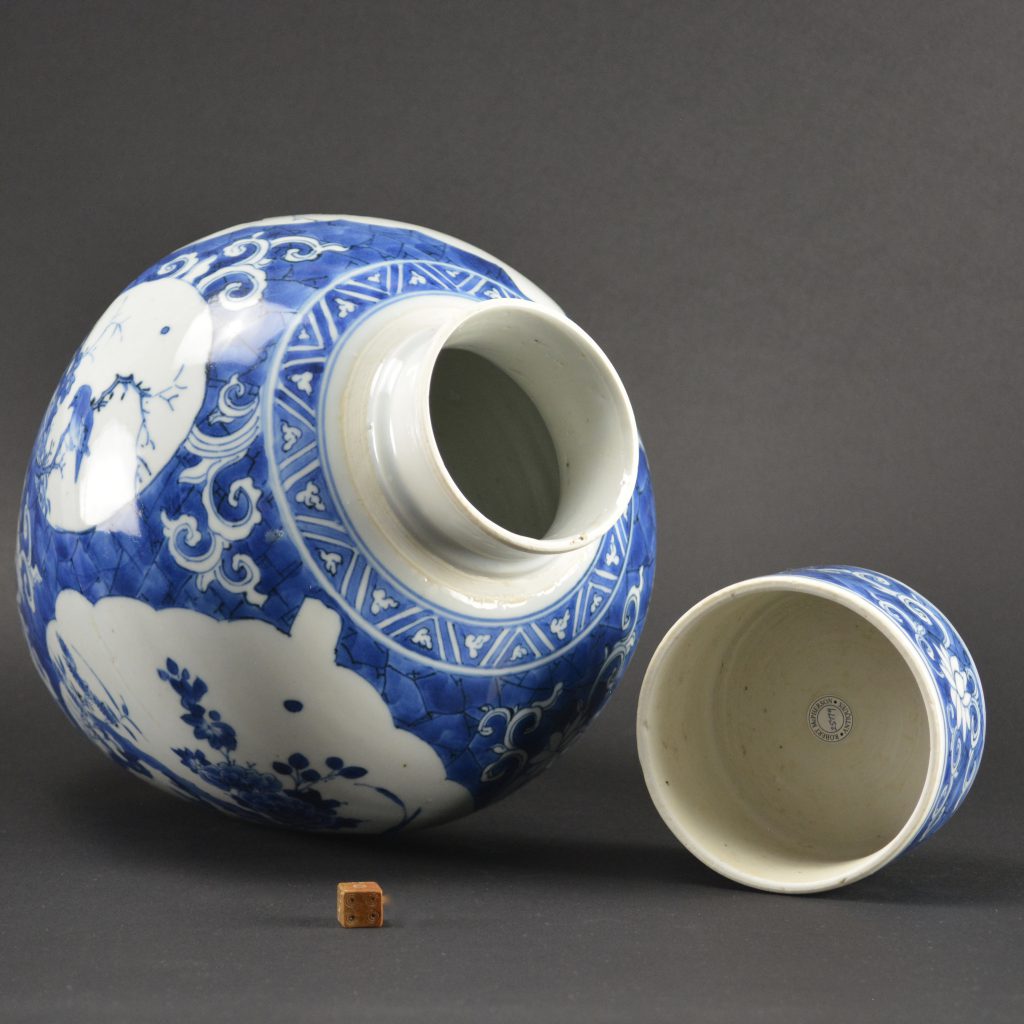 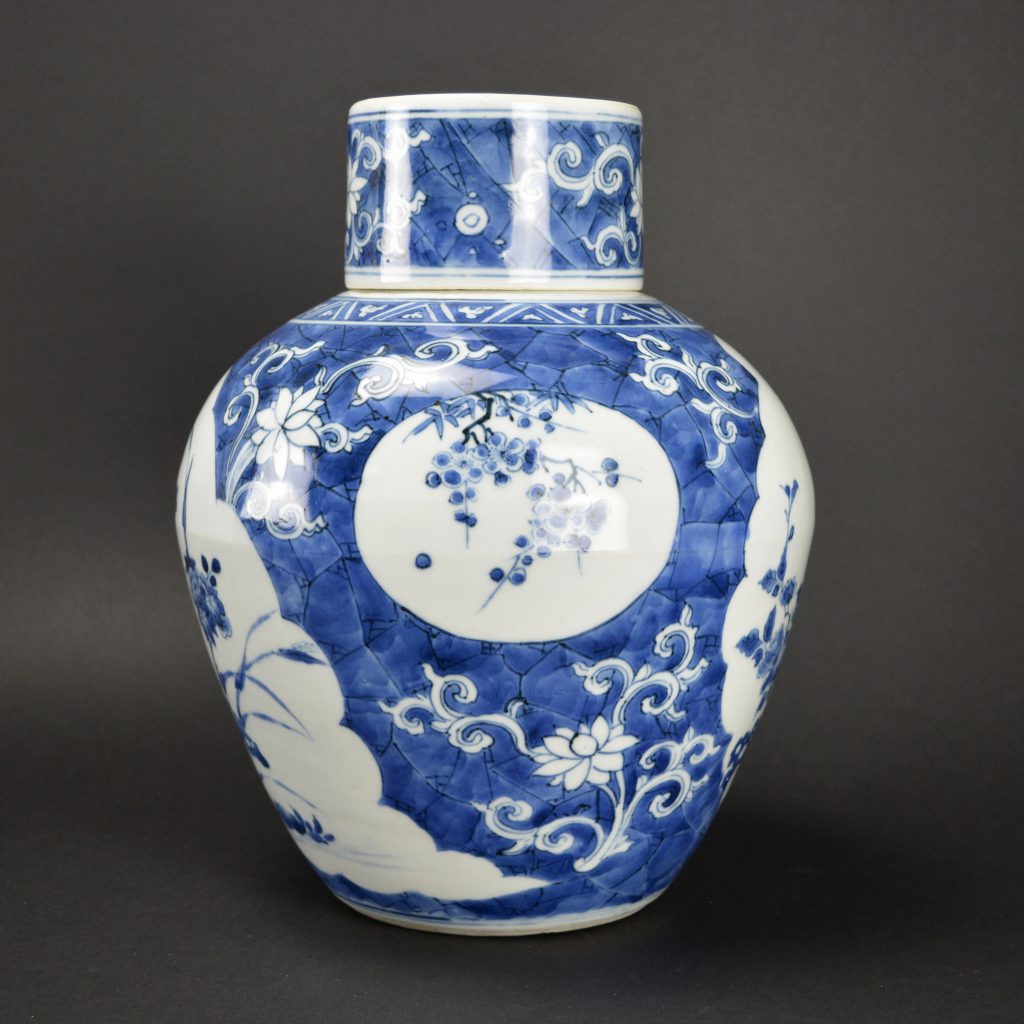 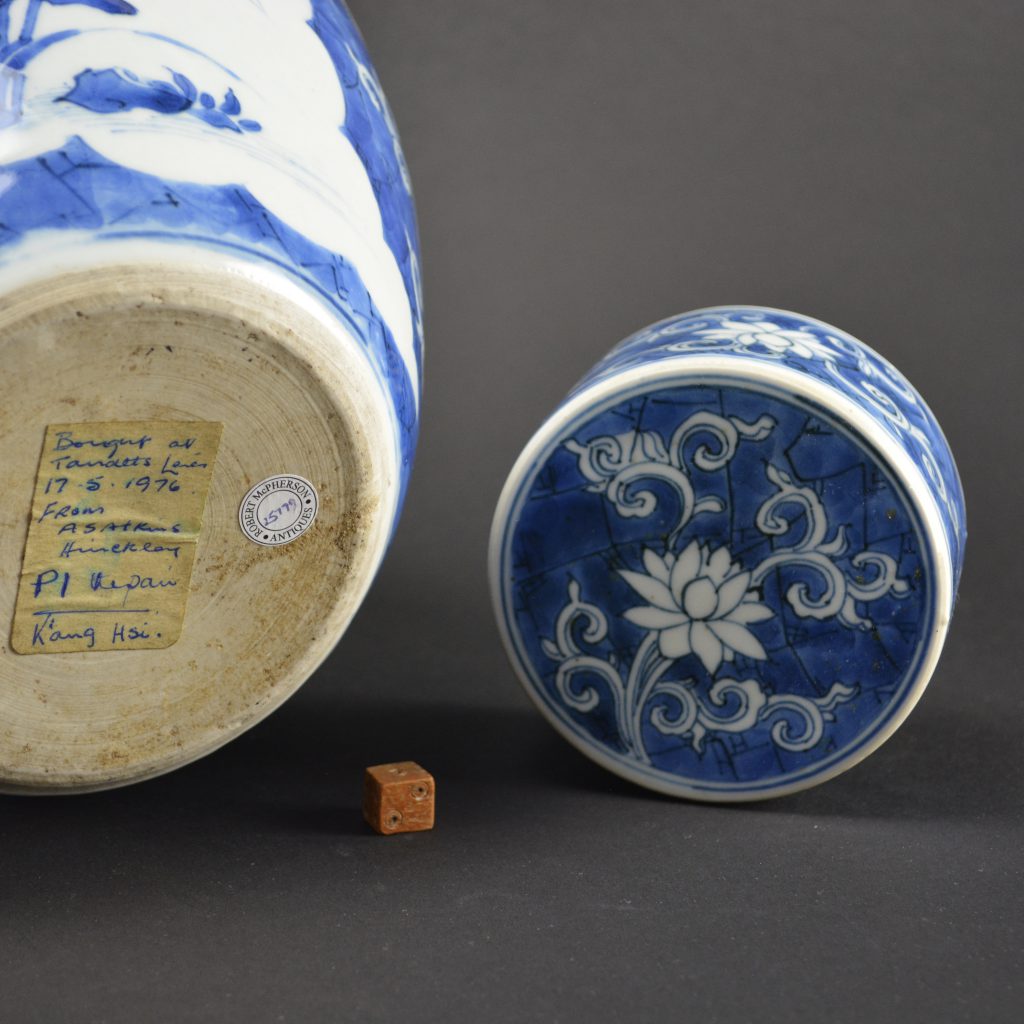 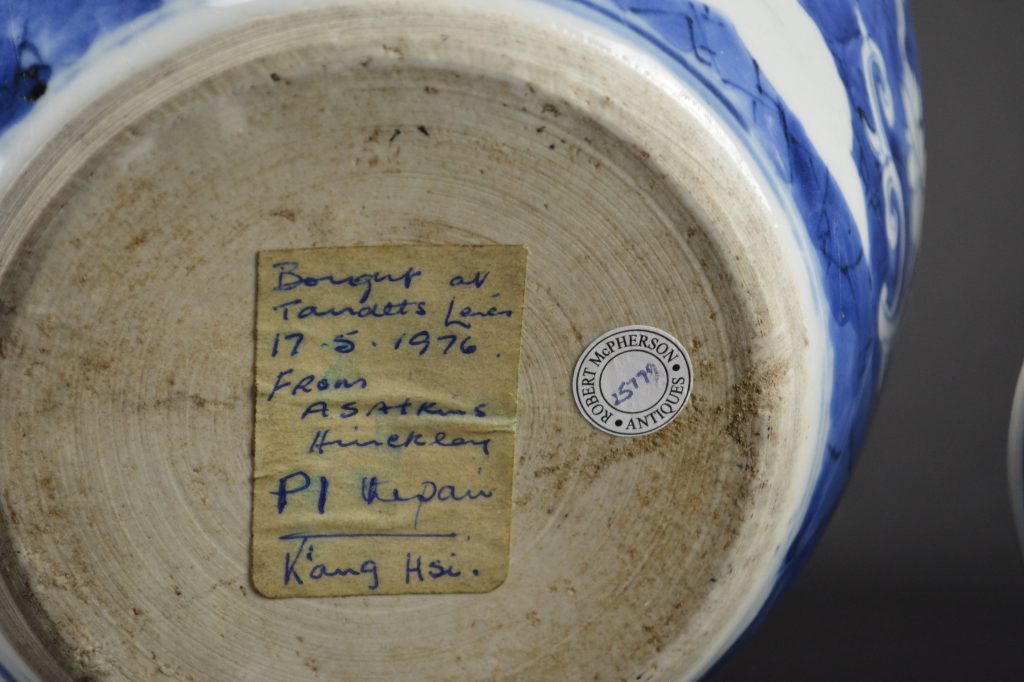 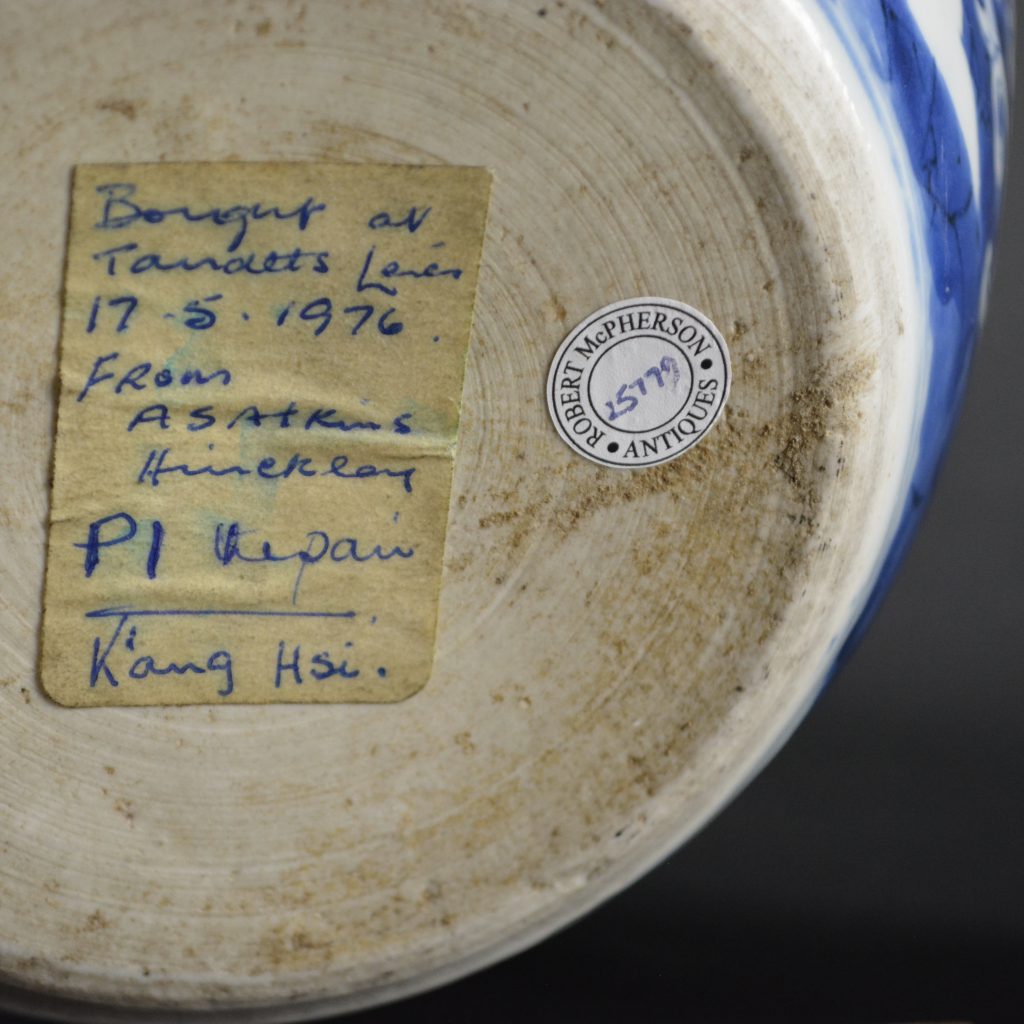 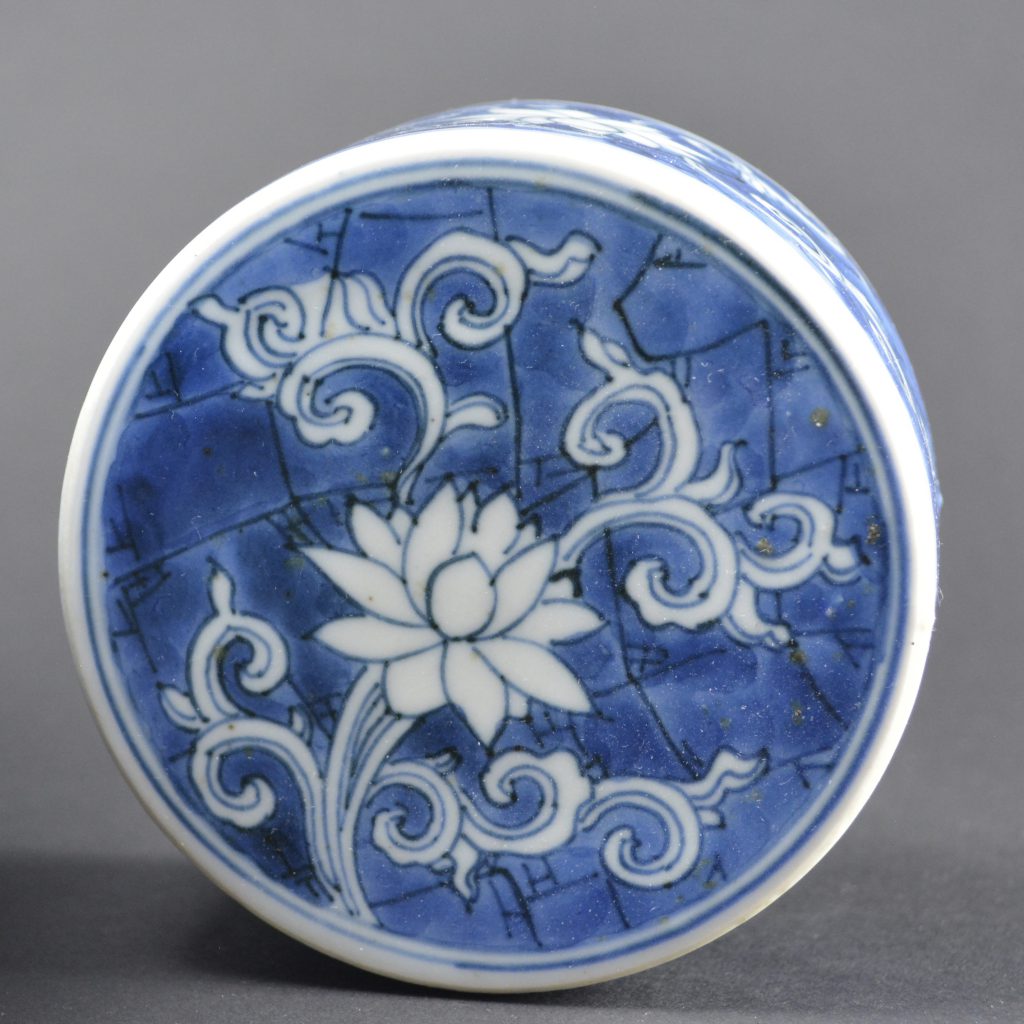 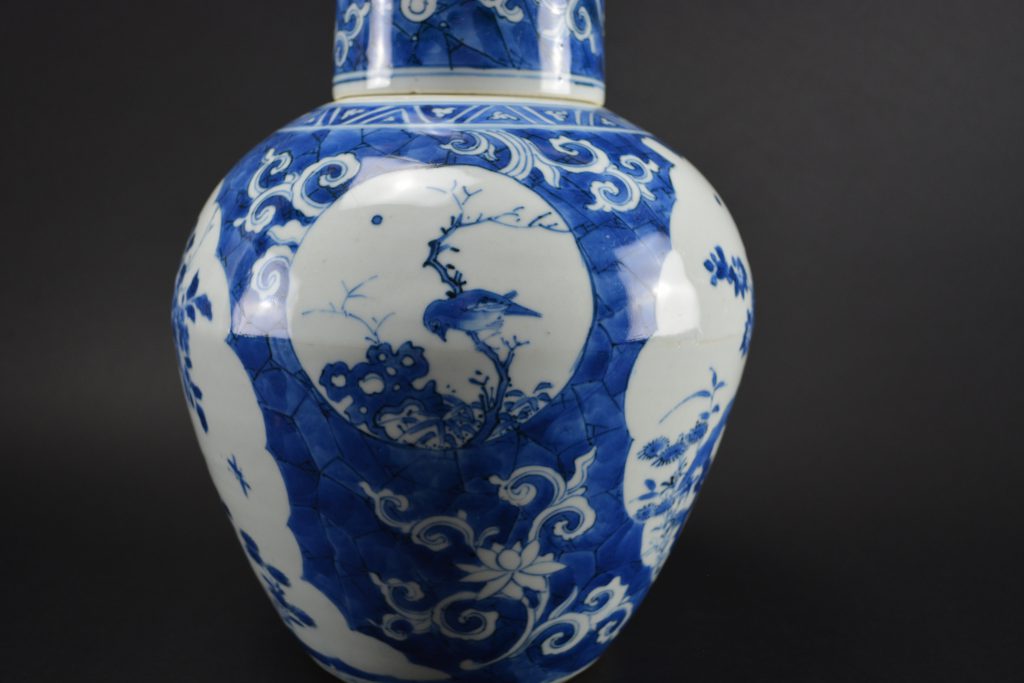 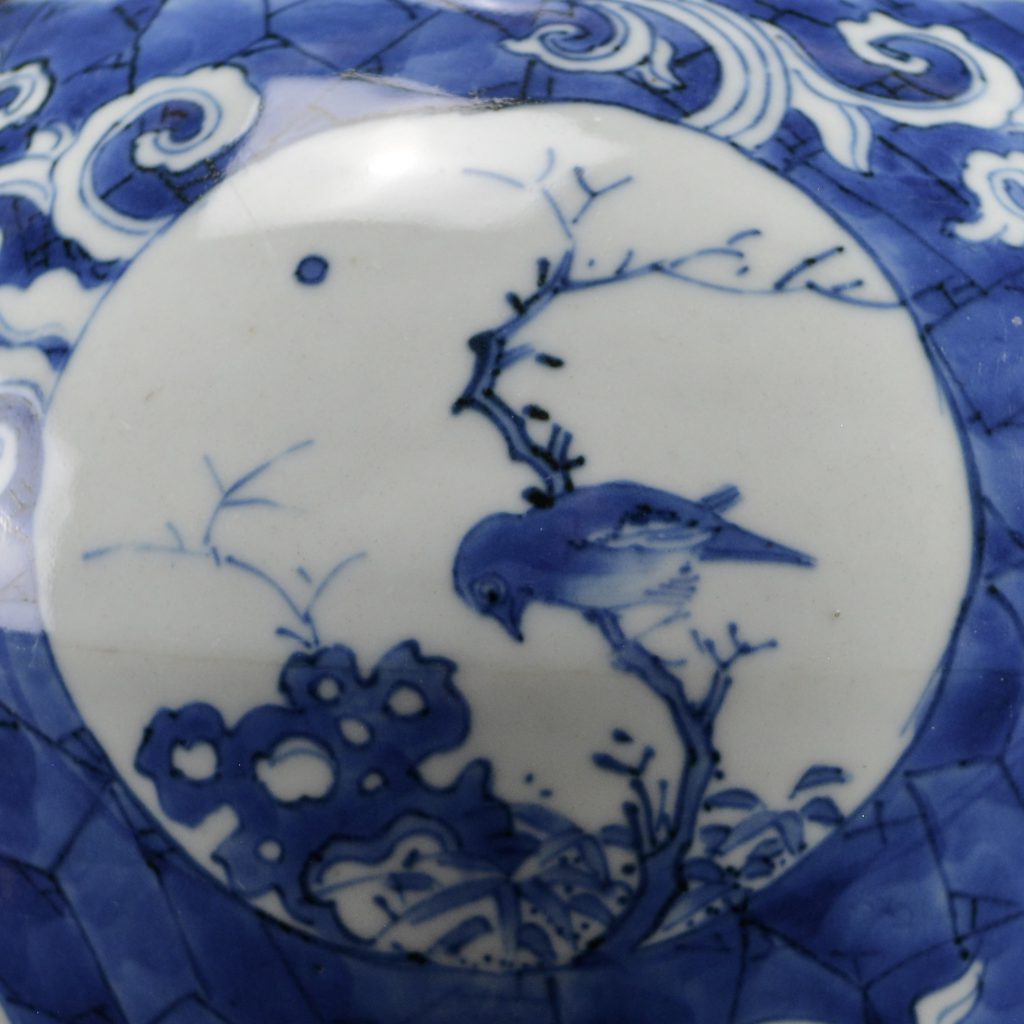 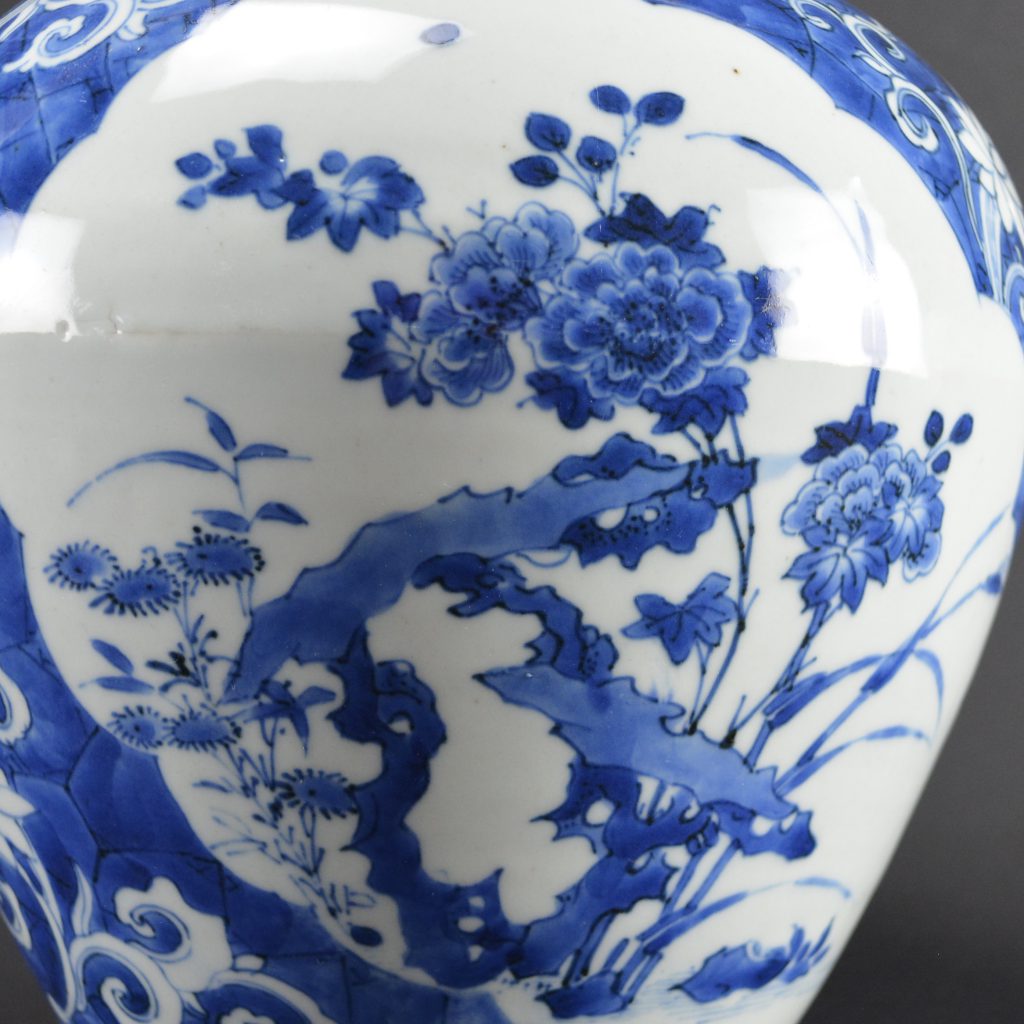 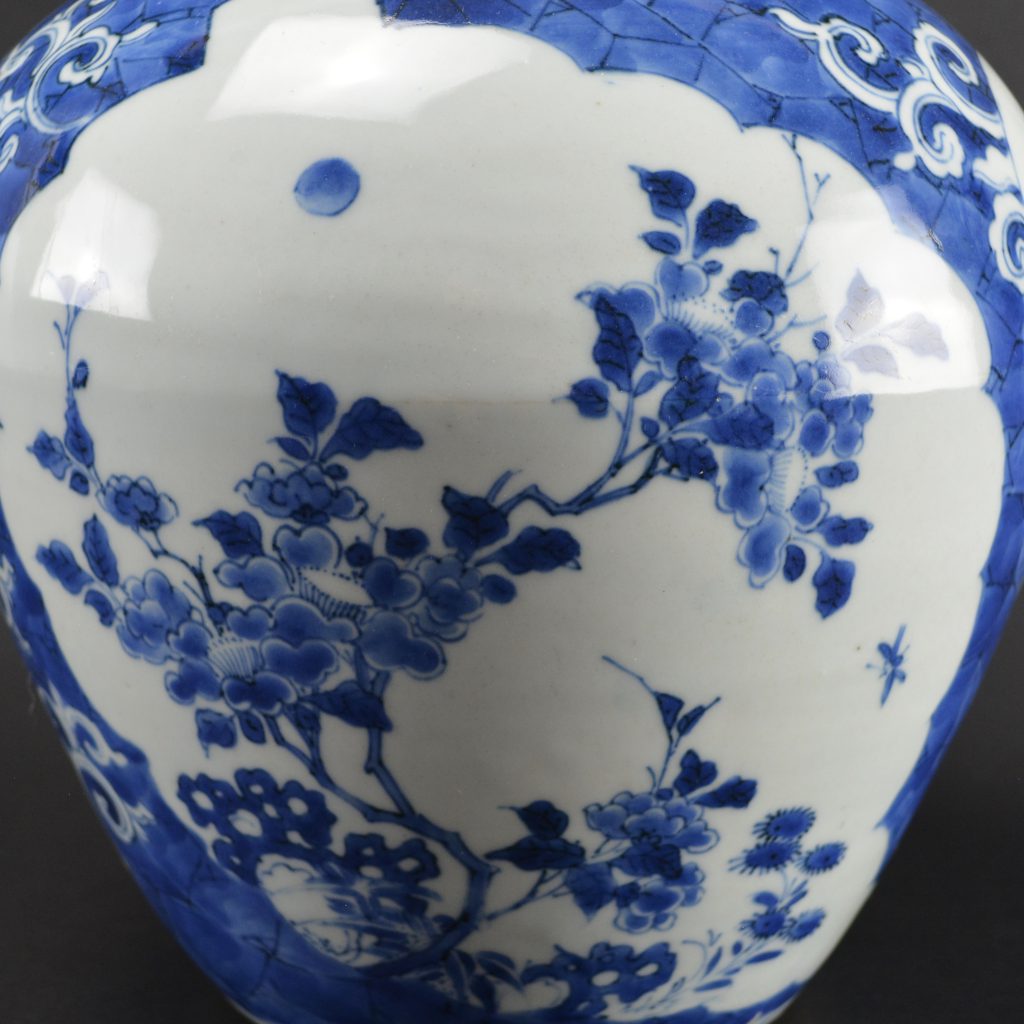 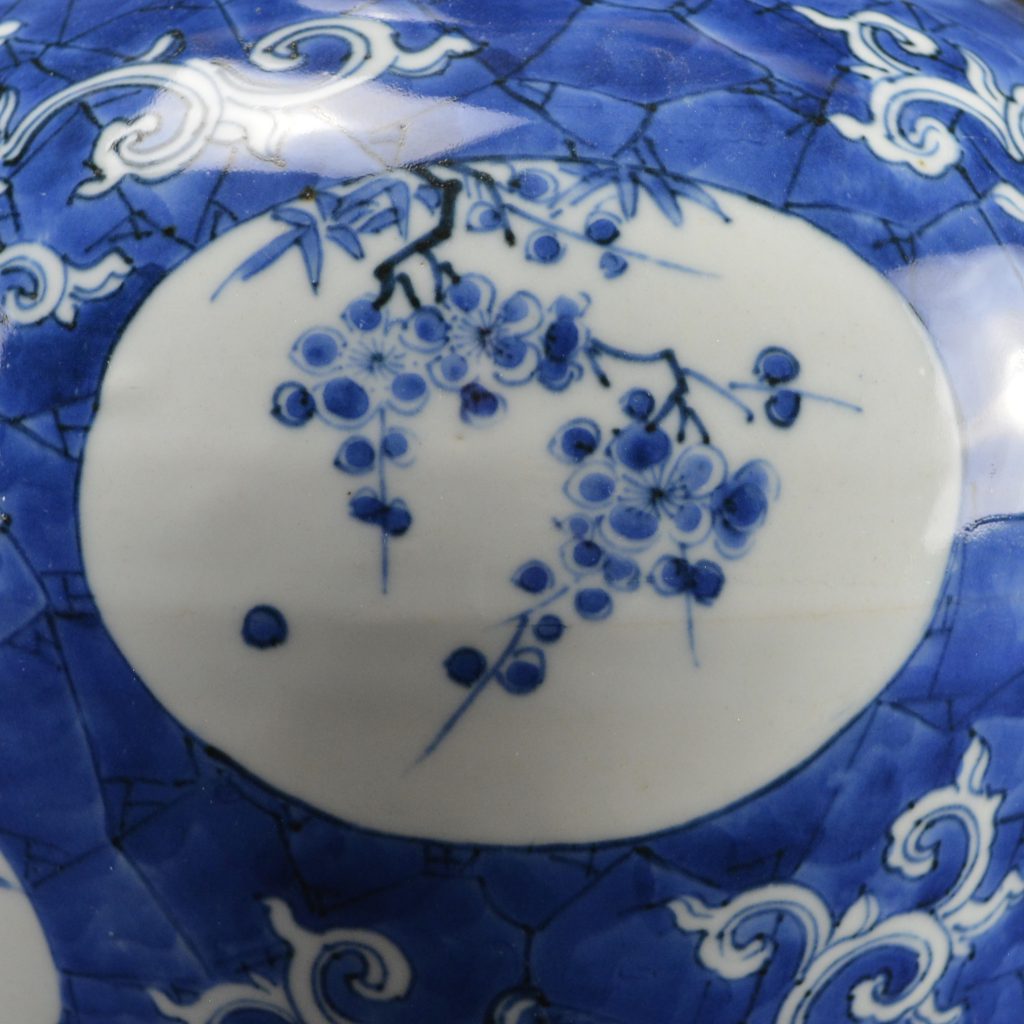 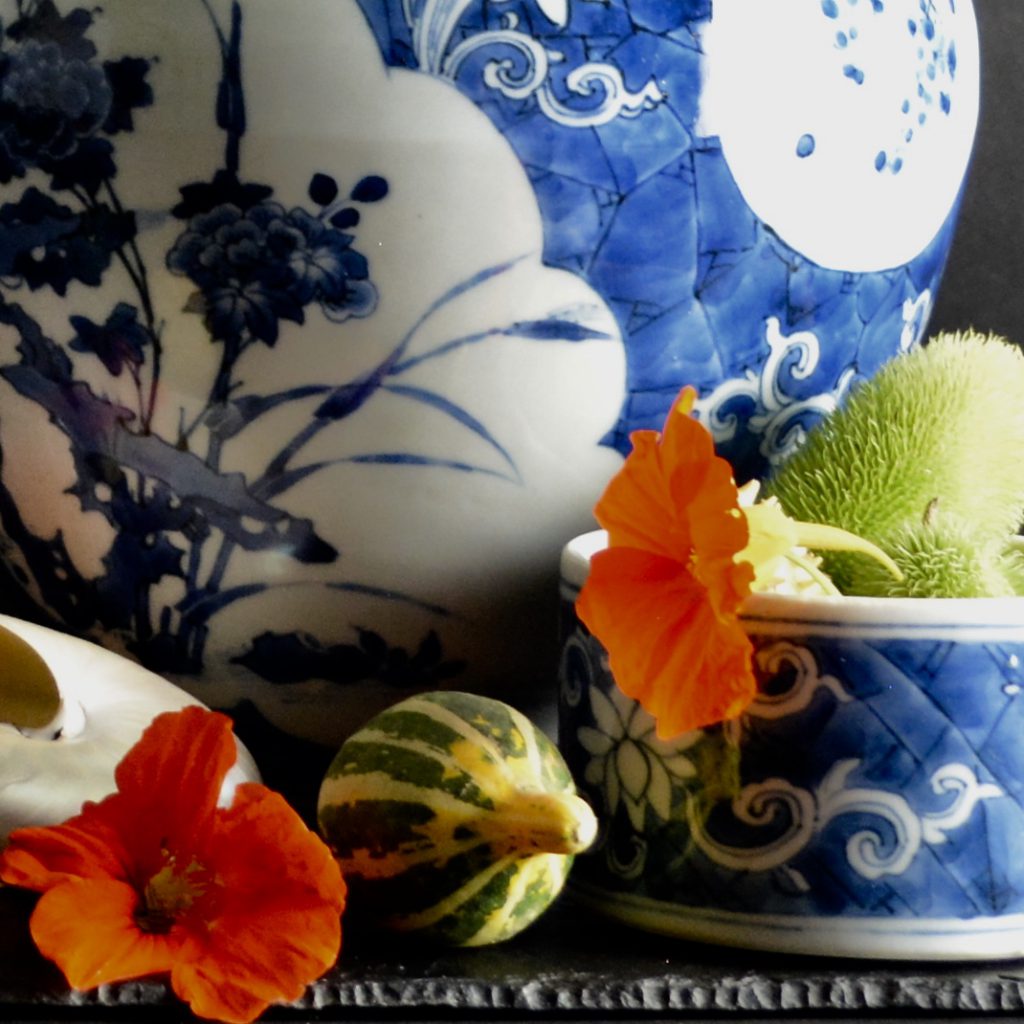 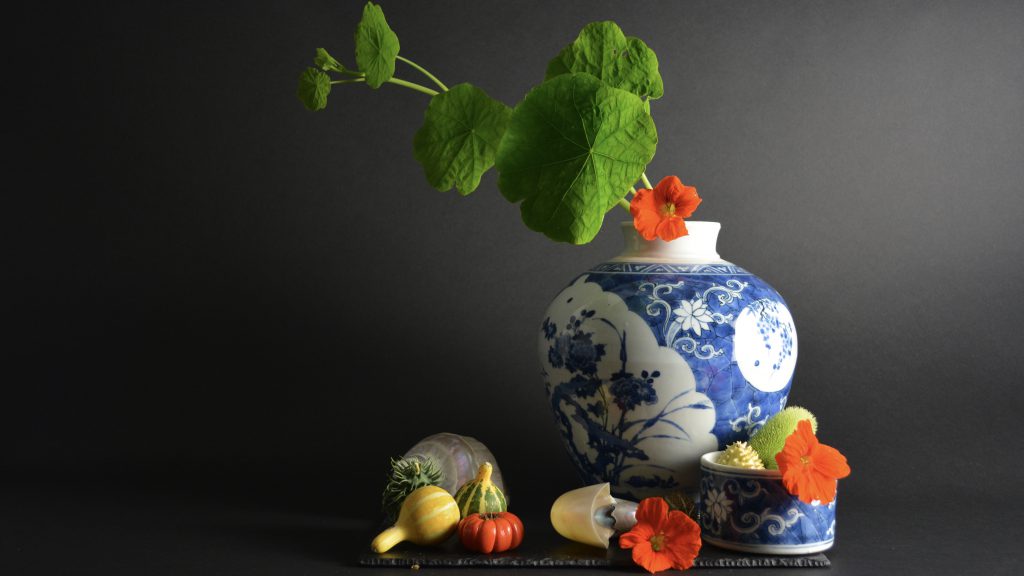 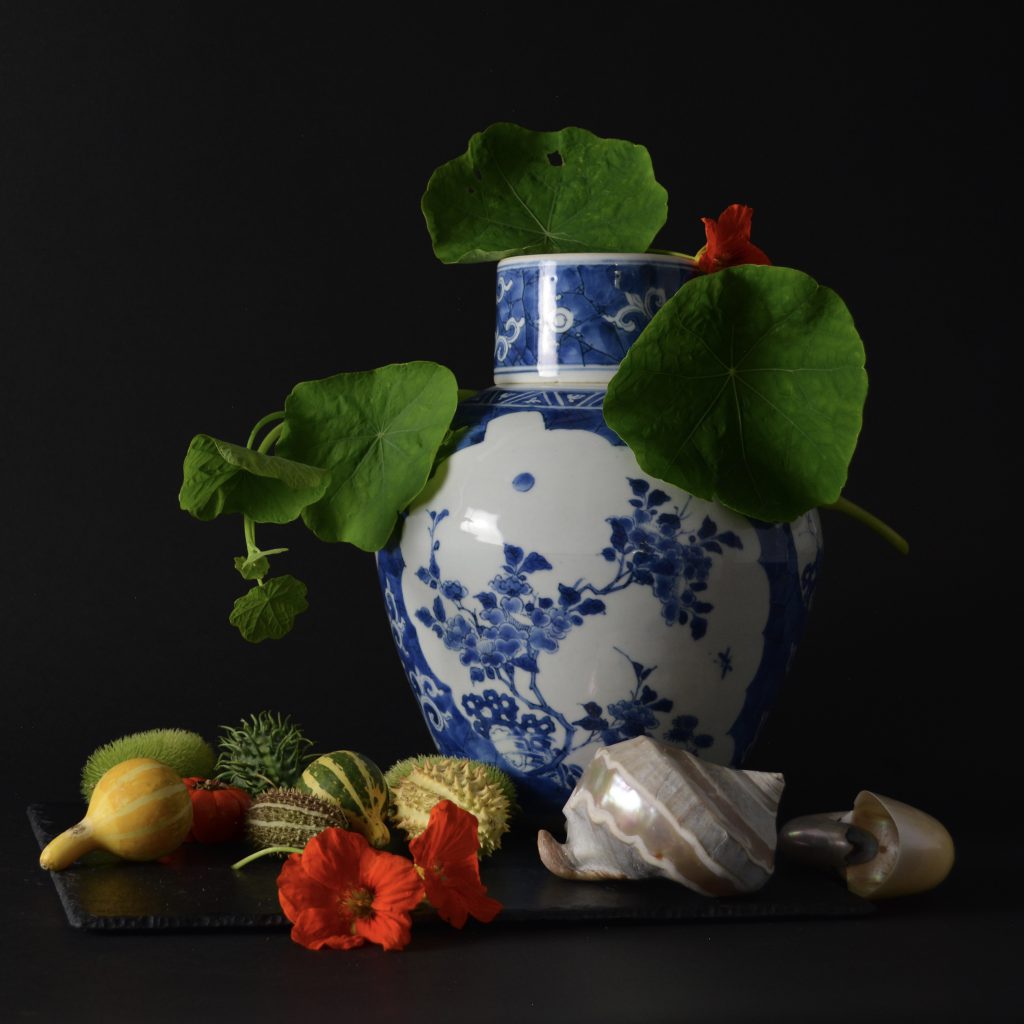 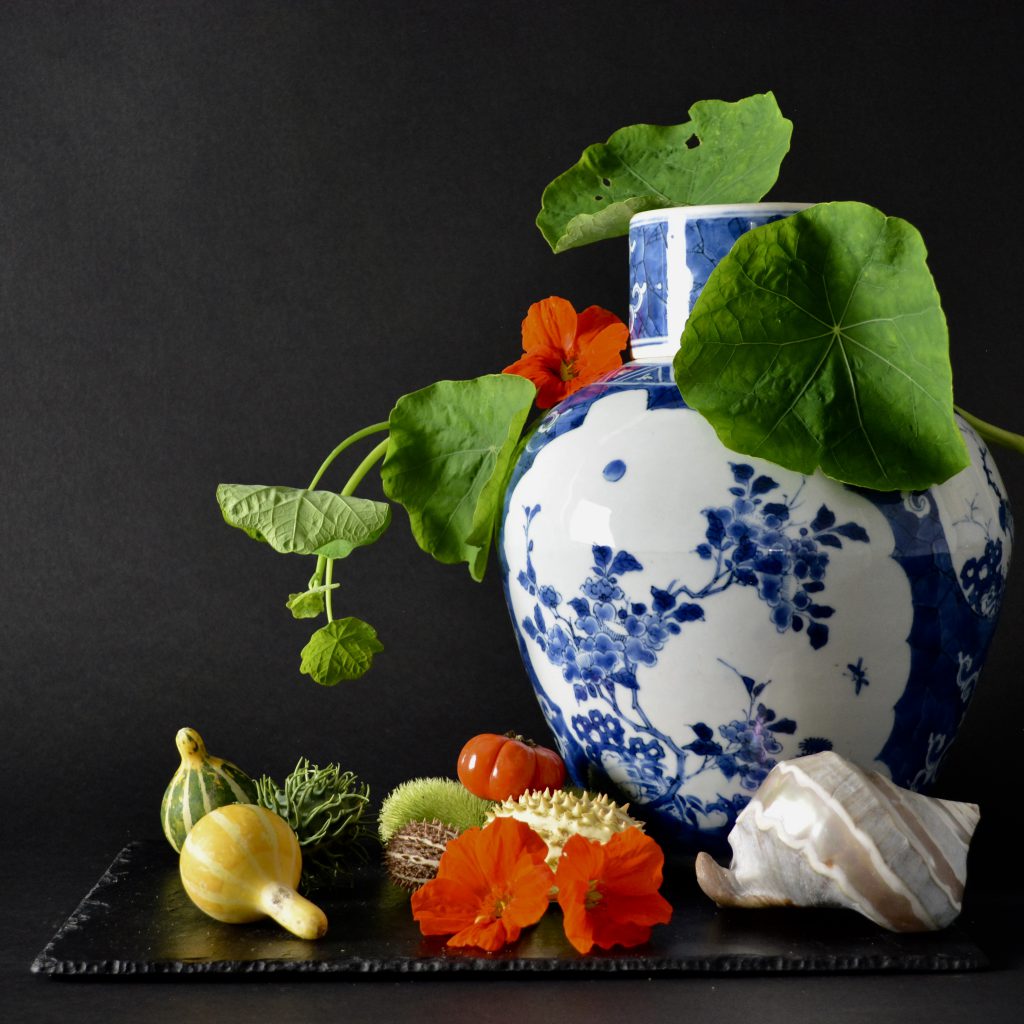 This painting by William Kalf of 1669 is typical of still-life painting during the Dutch Golden Age. Kalf was at the forefront of this luxurious painting of luxurious objects and dominating this image is late Ming jar and cover from around 1640. Exotic, oriental and like nothing else in Europe this type of Chinese blue and white fascinated the Dutch, indeed they are famous copies of it, Delftware. This import by the V.O.C. was especially made for the Dutch market and fitting on top of large pieces of oak furniture, so popular at the time.  Further exotic items in Kalf's still life include a 'Turkey carpet', citrus fruit but also luxury items made in the Netherlands, such as the silver dish. In the 1650s and '60s, as the Netherlands flourished due to its commerce and pro-commercial politics, Kalf perfected the pronk (display) still life to exhibit its prosperity. Goethe thought he succeeded, saying of Kalf's paintings that "there is no question that should I have the choice of the golden vessels or the picture, I would choose the picture."

Hatcher Cargo was the first porcelain cargo from a shipwreck to come on to the market. It was sold in several auctions in Christie`s Amsterdam in 1984 and 1985. It remains one of the most important cargoes of shipwreck ceramics ever recovered, despite the lack of historical evidence recorded by the salvage team. Two porcelain covers dated 1643 helped date the wreck but this needed corroborating to give a firm date of the wreck and it`s cargo. The dating of the porcelain from the Hatcher Cargo is based on several elements. Firstly, the ceramics recovered form a coherent group, in other words they appear to all have been made at the same time. Secondly comparative dating was used to corroborate the date of the porcelain. For example, blue and white porcelain dishes decorated with a coiled serpent recovered from the Hatcher Cargo match an important dish from the fall of the Ming dynasty, formerly in the Percival David Foundation, now at the British Museum London, this dish can be dated to 1644 – 1645. Other comparative dating is also consistent with the presumed date of the porcelain. However, the most important dating reference remains the two covers recovered from the wreck datable by inscription to the spring of 1643. Although the the Ming dynasty officially ended in 1644 the transition from the Ming to the beginning of the Qing was messy and protracted. The porcelain made during this period of civil war and chaos is referred to as `Transitional Porcelain`. It covers the period from the last Ming Emperors until the early years of the Kangxi period, which is normally given a date of about 1620 to 1670 . The Hatcher Cargo is a vital dating tool for this previously poorly understood period of Chinese porcelain production.

The Transitional Period
The roots of this unsettled period starts during the later part of Wanli`s reign (1573-1620). At the begging of his reign China was doing very well, new crops from the Americas such as peanuts, maize and sweet potatoes increased food production, while simplified taxes helped the state run smoothly. But this was not due to Wanli`s enlightened reign, but to his Mother championing a man that was to become the Ming dynasties most able minister, Zhang Zhuzheng (1525—1583). Wanli became resentful of Zhuzheng`s control but upon his death became withdrawn from court life. Between 1589 to 1615 he didn`t appear at imperial audiences, leaving a power vacuum that was filled by squabbling ministers. Mongols from the North raided as Japan invaded Korea. Wanli re-opened the silver mines and imposed new taxes but the money was lost due to corruption, as well as being frittered away by the indulgent Emperor himself . The next emperor of Ming China, Tianqi (1621-1627), was bought up in this self indulgent disorganised environment, at the very young age 15 his short reign started. He didn`t stand a chance. Tianqi made the mistake of entrusting eunuch Wei Zhongxian (1568-1627) who Anna Paludan in her excellent book “Chronicle of the Chinese Emperors” (Thames and Hudson, 1998) describes as “a gangster of the first order”. Tianqi was deemed to have lost the Mandate of heaven by the Ming people. Tianqi`s younger brother, the last of the Ming Emperors, Chongzhen (1628-1644), was not able to save the situation. The systems of administration had broken down, corruption was rife and so when a sever famine broke out in 1628 nothing much could be done. Anna Paludan describes the tragic end to the great Ming Dynasty “The final drama was worthy of a Greek tragedy. The emperor called a last council in which `all were silent and many wept`, the imperial troops fled or surrendered, and the emperor, after helping his two sons escape in disguise, got drunk and rushed through the palace ordering the women to kill themselves. The empress and Tianqi`s widow committed suicide; the emperor hacked off the arm of one daughter before killing her sister and the concubines. At dawn he laid his dragon robe aside and dressed in purple and yellow, with one foot bare, climbed the hill behind the now silent palace and hanged himself on a locust tree”. The Great Wall of China, started 2,000 years ago was built to protect China from the Northern barbarian hoards, it was often tested and sometimes failed. The Jin people invaded China, ruling the North between 1115 and 1234, it was their descendants the Manchus, Jurchens from south east Manchuria that took full advantage of the problems of the Ming dynasty. In 1636 they adopted a Chinese dynastic name, the `Great Qing` (Qing meaning pure). The first of the Qing emperors was Shunzhi (1644-1661) but for most of his reign his uncle ran the state. War raged on during this period and it wasn`t until the second Qing emperor Kangxi (1662-1722) that true peace was achieved. Kangxi was a wise and educated man, he became a highly successful emperor bringing China a long period of wealth and stability.
Shunzhi was emperor of Manchuria between Oct. 8, 1643-Oct. 30, 1644. Officially proclaimed emperor of China on Oct. 30, 1644. The Shunzhi Emperor (March 15, 1638–February 5, 1661?) was the second emperor of the Manchu Qing dynasty, and the first Qing emperor to rule over China proper from 1644 to 1661.