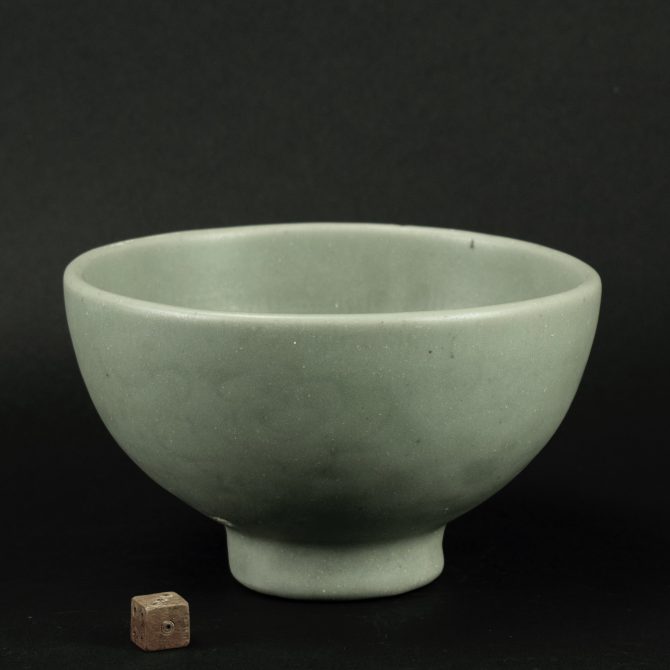 An Early Ming Celadon Bowl, Longquan Kilns, Late 14th or Early 15th Century. The interior of this Ningyo ude celadon bowl is lightly moulded with figures with explanatory inscriptions and a `Greek-Key` border above, the well is Impressed with a single character. The border design is repeated on the exterior, below it are quickly incised flowering plants. The bowl is covered in a very thick glaze and much of the detail is obscured unless it is in bright light.

This bowl and its companion are from a Japanese collection. A similar Ming celadon bowl was discovered in the ruins of Saya Castle, Komatsu-Shi, Ishikawa prefecture, Japan, built in the sixteenth century, and now in the Tokyo National Museum. Such bowls are called Ningyo ude bowls in Japan because of their figural decoration.

Condition
In good condition, the glaze is quite matt perhaps through wear or burial. there is a wide feint stain to the exterior of the bowl, see the fifth photograph of the bowl proped to the right.
Size
Diameter : 14.9 cm (6 inches). Height : 8.8 cm (3 1/2 inches).
Provenance
A Japanese ink inscription on the base states that this Ming bowl was one of a pair, see the other bowl, stock number 25280
Stock number
23132-1
References
Several examples of this type are known. A bowl which of a good rich colour and of a different design is illustrated in : Yuegutang, A Collection of Chinese Ceramics in Berlin (Regina Krahl, G+H Verlag, Berlin, 2000) pages 280 and 280. A similar but Ming celadon bowl of this type is in the British Museum see : Ming Ceramics in the British Museum (Jessica Harrison-Hall, British Museum Press, 2001) page 482, Item 16:52. A further example of this type of Ming celadon bowl was discovered in the ruins of Saya Castle, Komatsu-Shi, Ishikawa prefecture, Japan, built in the sixteenth century, and now in the Tokyo National Museum. Such bowls are called Ningyo ude bowls in Japan because of their figural decoration". For another example of this type of Ming Celadon Bowl see : Chinese Ceramics, Bronzes and Jades in the Collection of Sir Allan and Lady Barlow (Michael Sullivan, Faber and Faber Ltd, 1963) page 99, illustration 95c ; `Chekiang Celadon, XIV-XV Century`. Also see : Chinese Ceramics, The New Standard Guide (Hi Li,Thames and Hudson,1996) pages 246 and 262, item 510, "The decoration of this bowl, combining calligraphy with human figures, reflects a new trend in Longquan (celadon) products during the Ming dynasty. In addition to the auspicious phrases and names of potters that had increasingly appeared on Longquan wares since the Yuan, historical figures provided another rich resource for decorative motifs at Daotai and Daqi (kilns at Zheijiang). 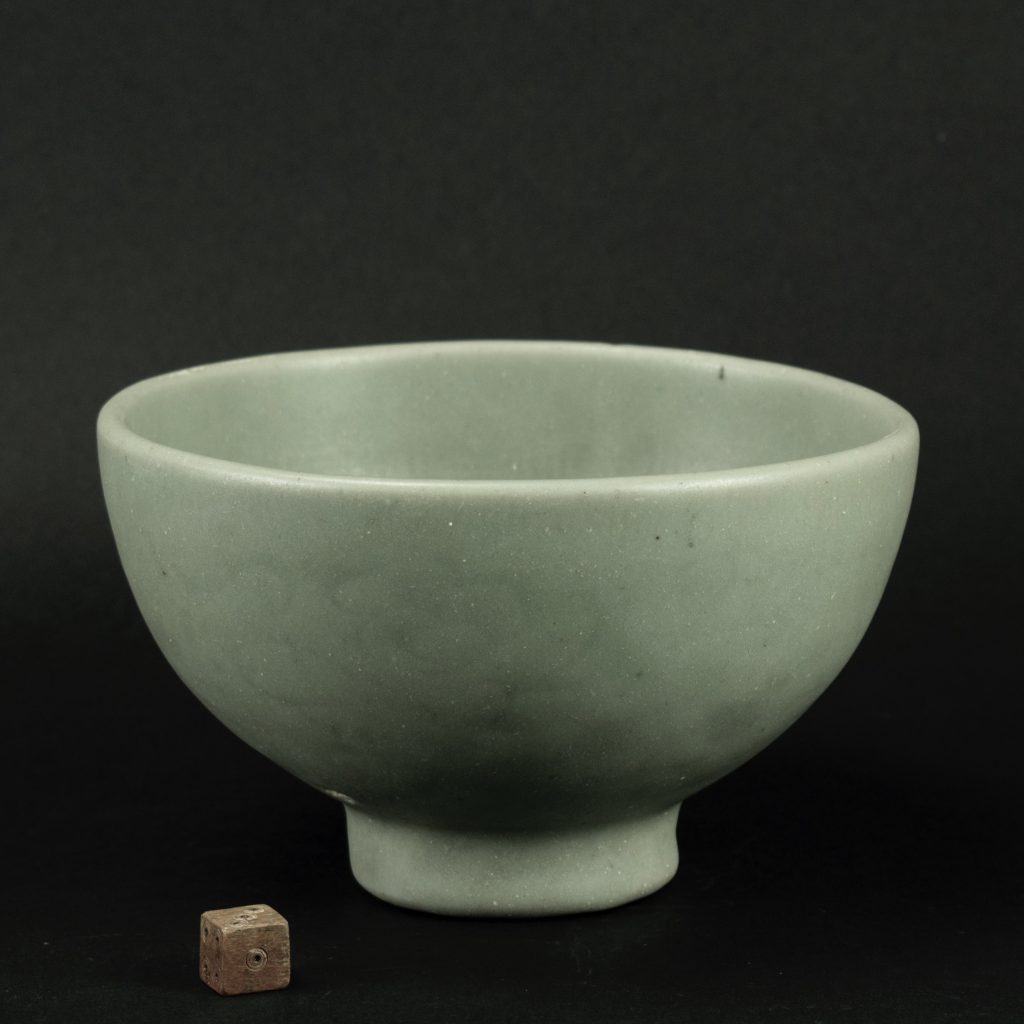 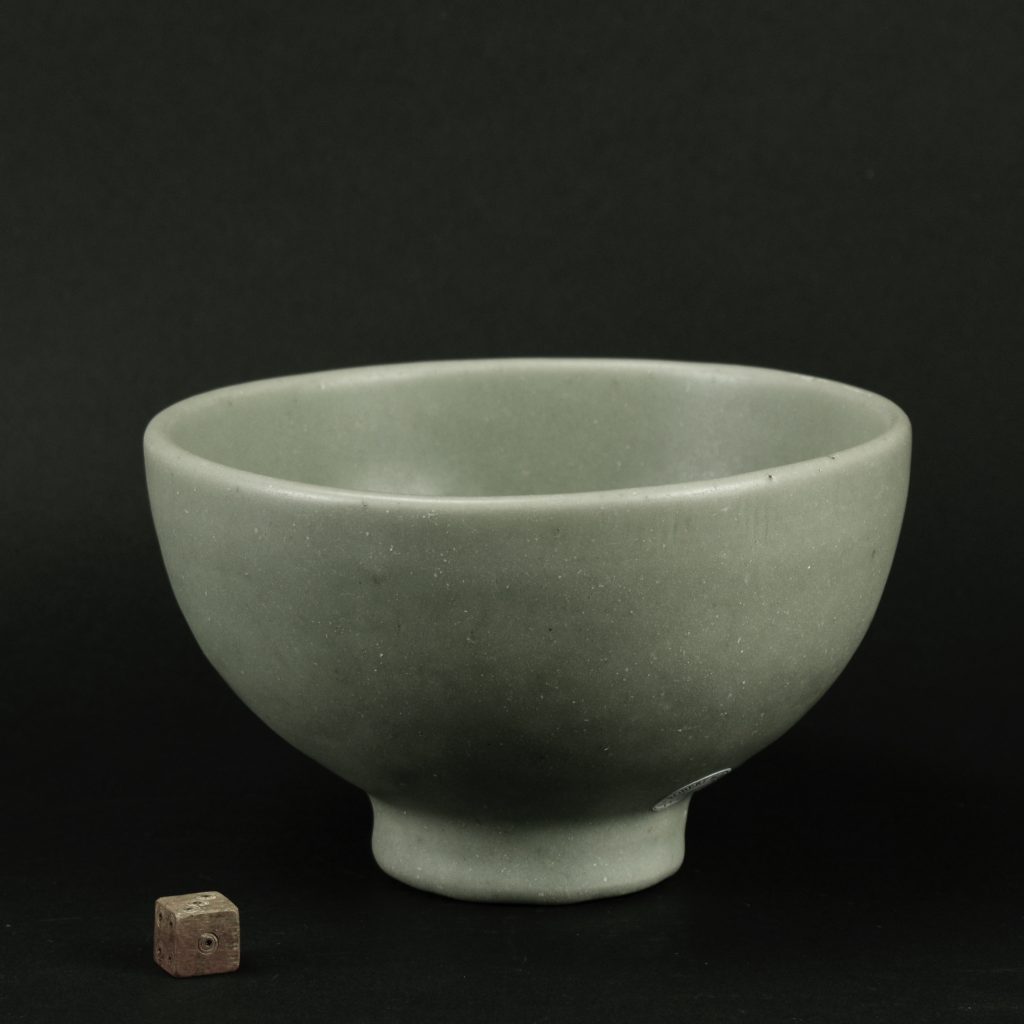 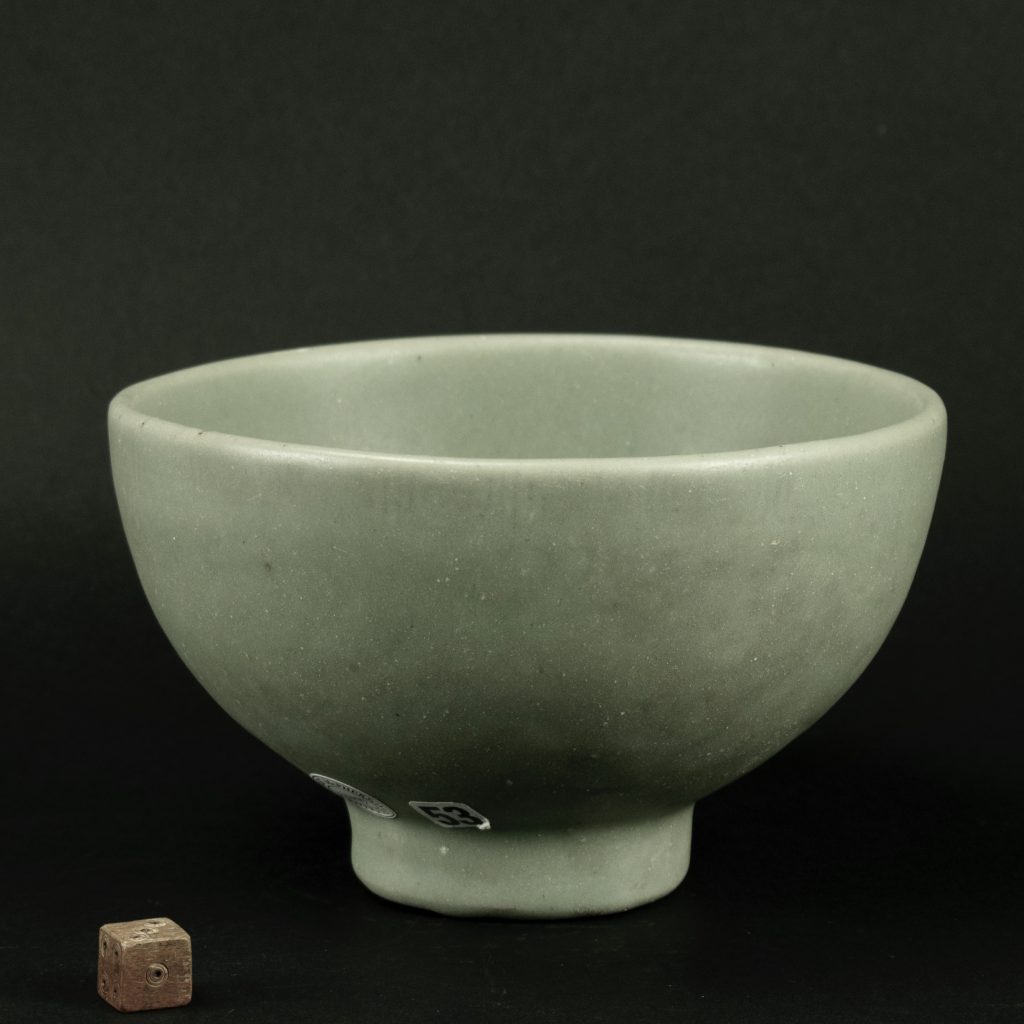 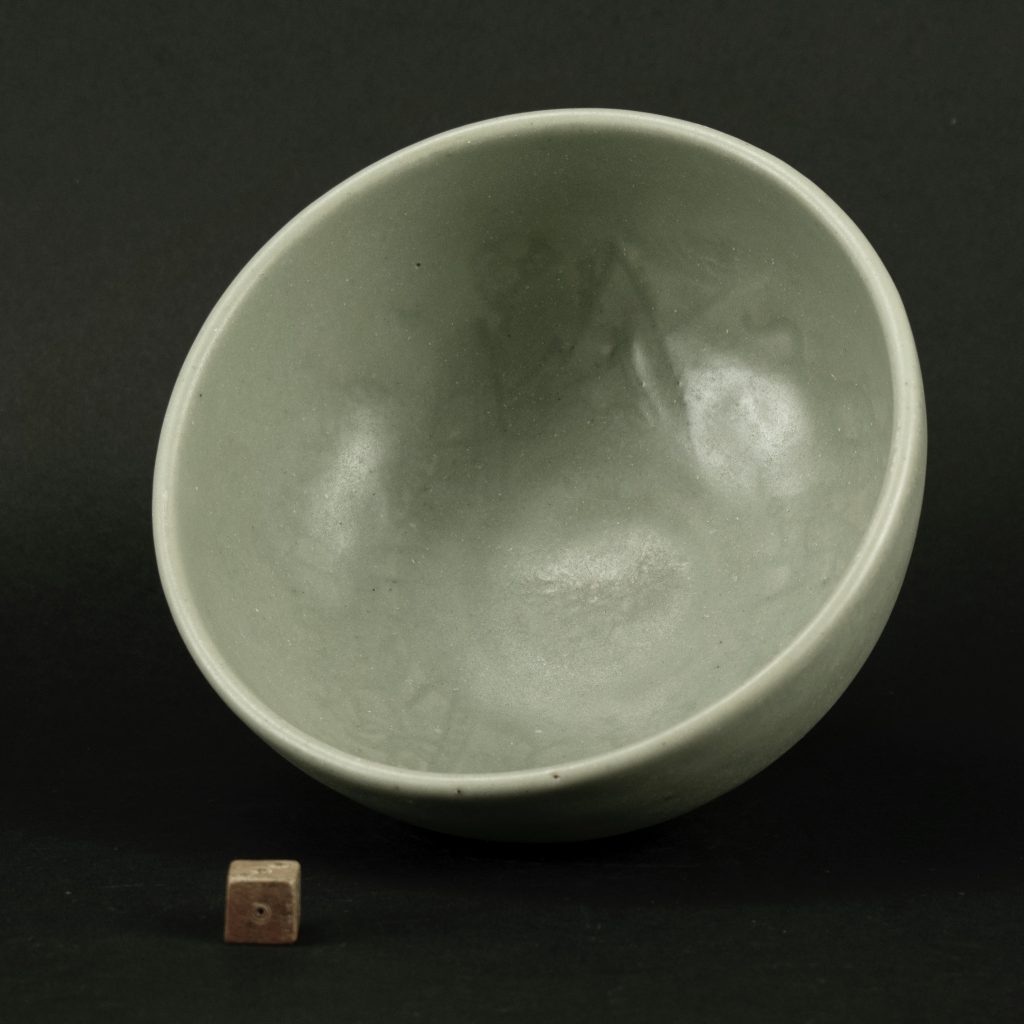 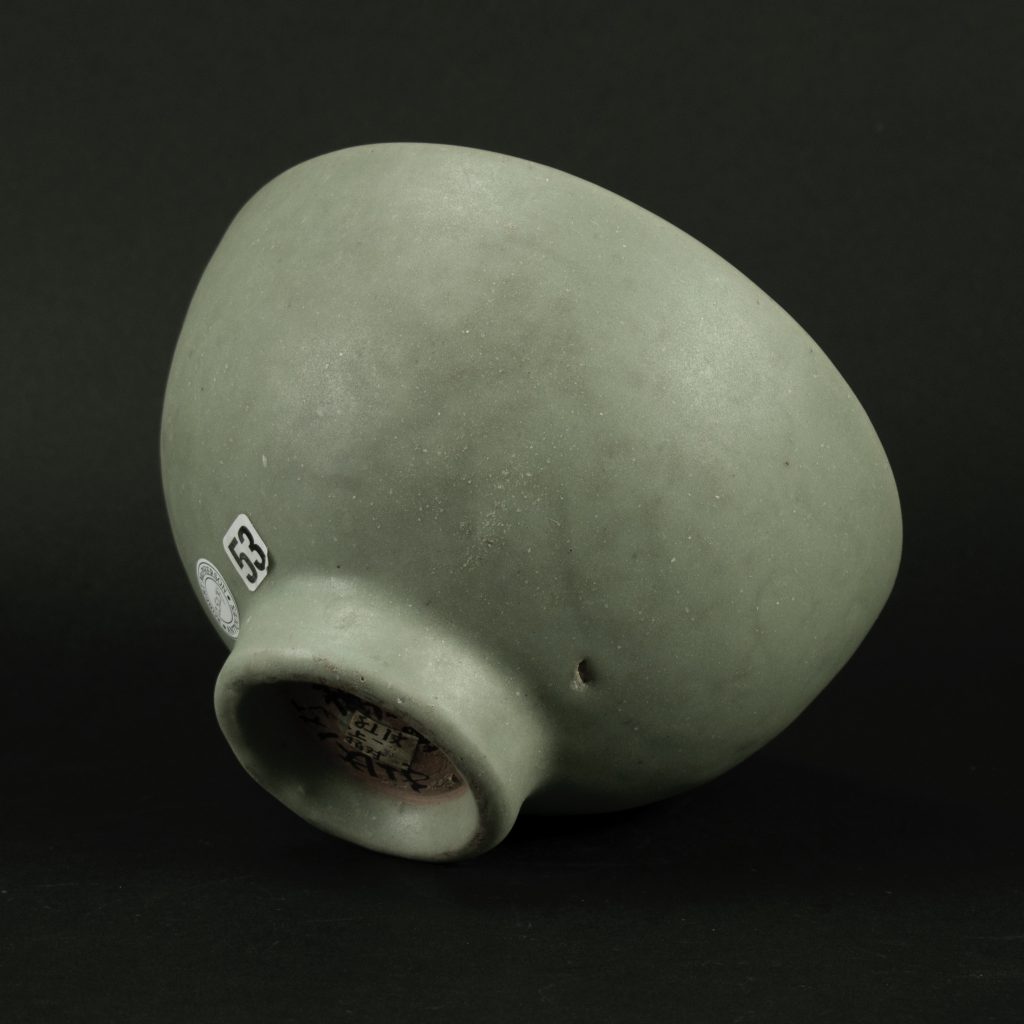 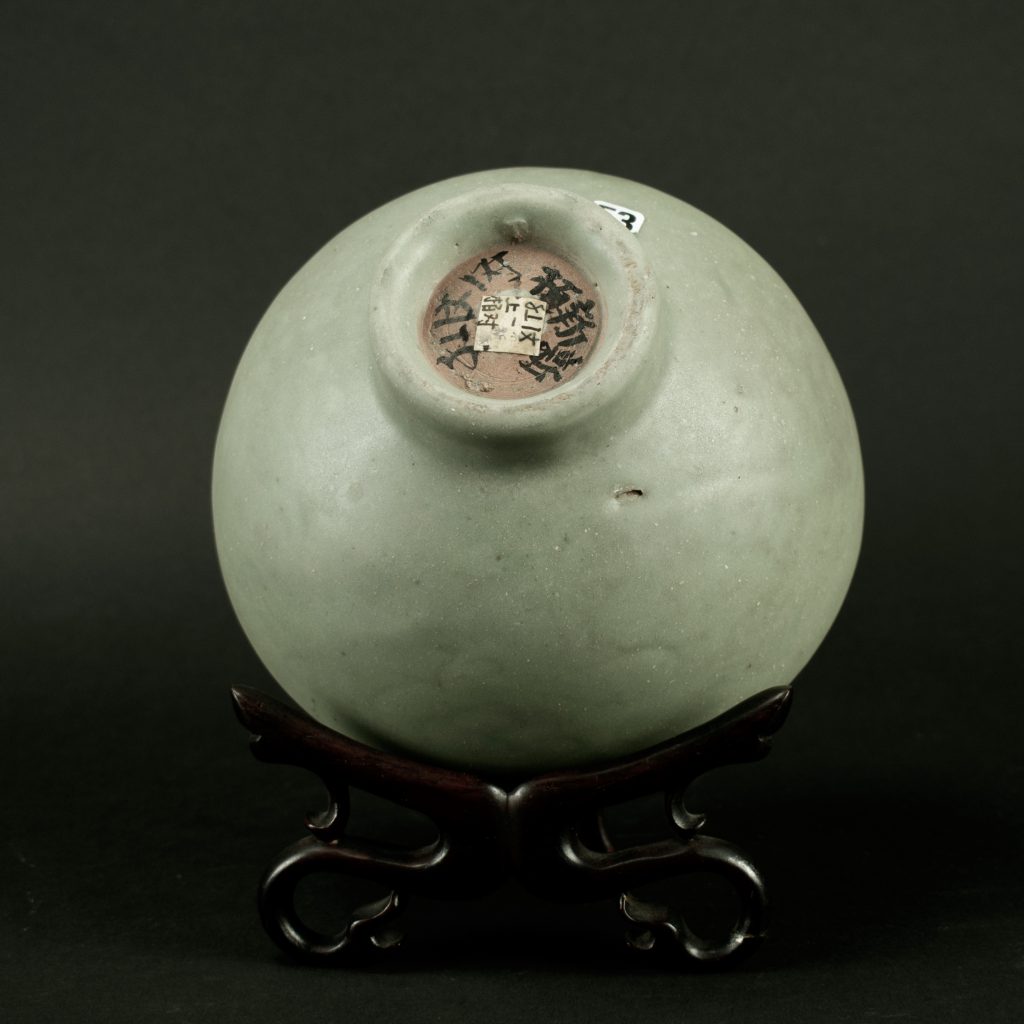 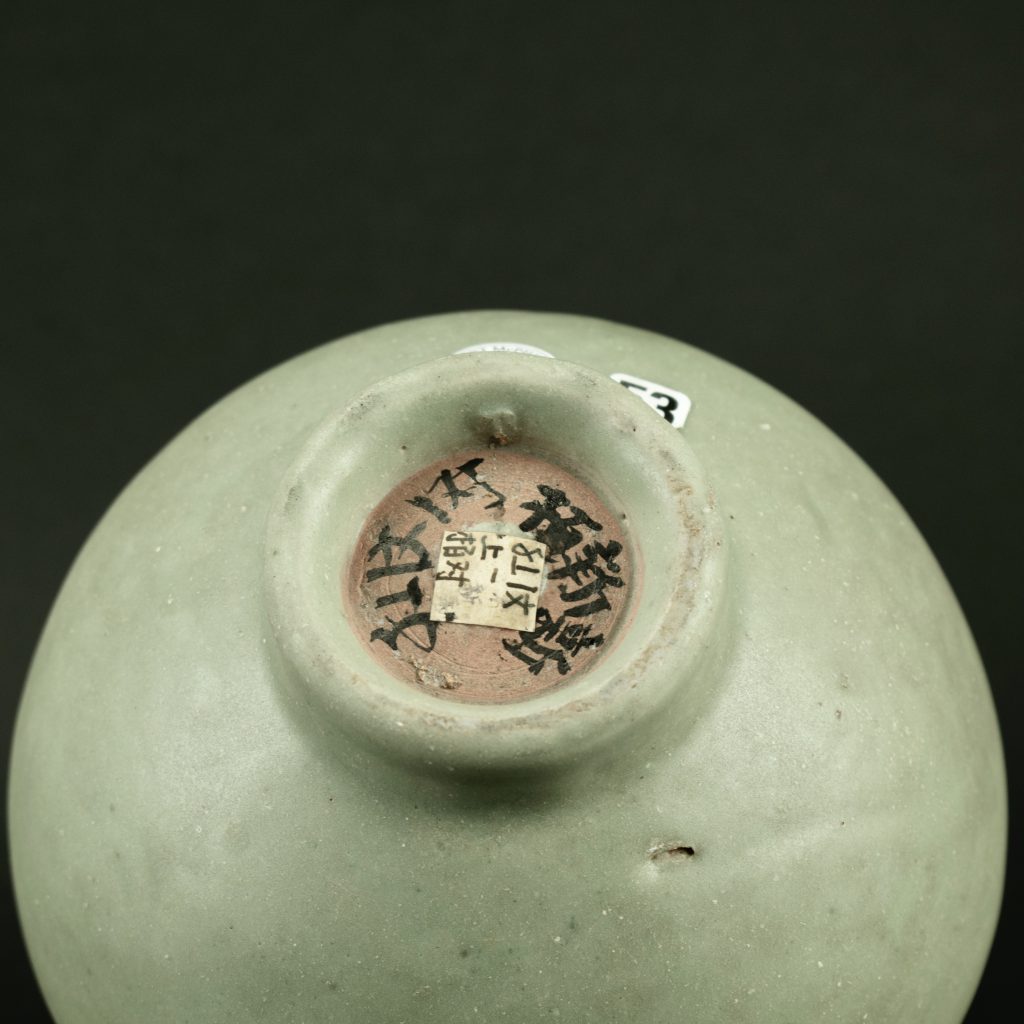 There was a distinct group of Ming celadon bowls produced at the Longquan kilns that are thickly potted and show figures with explanatory inscriptions. Several different designs were produced in varying qualities, the size and layout are similar, maybe four or five designs were produced. They are characterized by their thickly potted rounded form and moulded designs of figures with explanatory inscriptions to the interior, they usually have a single character in the well and the border is of a key-fret band, so-called Greek-Key. A Ming bowl of this type is illustrated in : Yuegutang, A Collection of Chinese Ceramics in Berlin (Regina Krahl, G+H Verlag, Berlin, 2000) pages 280 and 280. Regina Krahl dates this bowl to the early Ming dynasty, 14th or 15th century. She states a similar bowl was excavated from a tomb at Sunqiao, Jingshan county, Hubei province, dated to the 15th year of the Hongzhi period (1502). Regina`s description of this Ming bowl is worth quoting in full "The rounded bowl has a straight, heavy foot. The inside is decorated with moulded figure scenes and explanatory cartouches, showing a military and a civil official playing a board game under a star constellation, and the inscription zhenzi po qizhan (`the gods fighting over a chess game`) ; a scholar seated at a desk with a book and an inkstone, and the inscription Li Bo guan...juan (`Li Bo gazing at ... book`) ; a man with an official`s cap standing beside a board depicting a reclining qilin (a mythical animal), and inscribed jin yu (gold and jade) ; a lady seated at a table working on a piece of cloth, and with the inscription Zhoa Jun yi yi ca (`Lady Zhoa improves her talents`) : and a man playing a qin zither and the inscription Kongzi yi Yan Hui (`Confucius remembers Yan Hui`). The center is impressed with the character gao (noble... the character on the present example is different), the outside is incised with a flower scroll and the rim with a key-fret border both inside and out. The piece is covered with an olive-green glaze except for a ring on the base which has fired brick-red.

Zhenzi refers to the star gods of the Northern and Southern poles, who are determining men`s fate through their chess play. Jin yu is a general reference to riches. Zhao Jun is another name for Lady Wang Jiang, a legendary beauty at the Han court, who was married off to a `barbarian` chieftain. Yan Hui, who died young, was regarded as Confucius` most gifted disciple".

Another bowl from this group, albeit a poor quality one is in the British Museum, see : Ming Ceramics in the British Museum (Jessica Harrison-Hall, British Museum Press, 2001) page 482, Item 16:52. The Design has, like the previously mentioned example, six figures with narrative inscriptions. The bowl tells the story of Su Qin (died 317 B.C.). Jessica Harrison-Hall States in her Ming Catalogue "A bowl of this type was unearthed in 1982 in the tomb of scholar Wang Zhen (1424-1495) and his wife Mne Liu (1425-1503) in Huai`ian, Jiangxi province"........