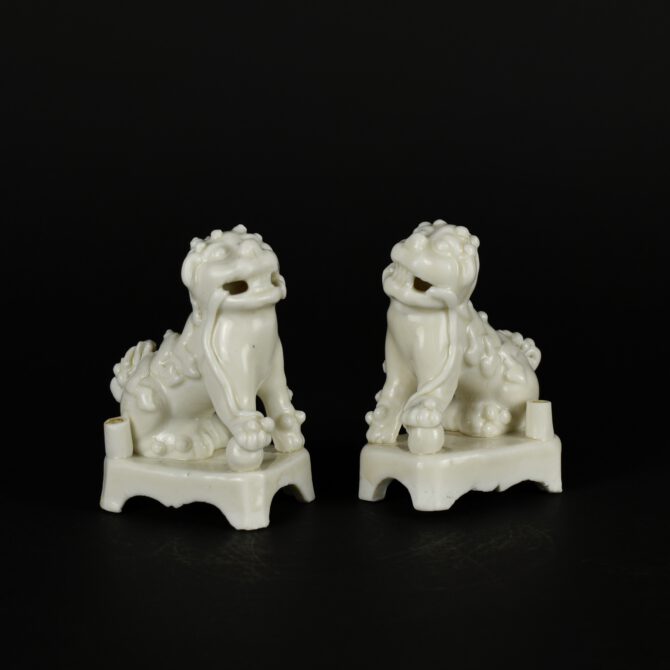 A Pair of Late Ming Dynasty or Early Qing Dynasty Blanc de Chine Porcelain Fu Dogs or Buddhist Lions, Dehua Kilns, Fujian Province. Chongzhen Period to Shunzhi c.1630 – 1660. These are early models with cut bases and teeth, the glaze is tinged with a feint rose colour. Compare to two pairs of Blanc de Chine Fu Dogs below, one of which is earlier and the other pair later.

Condition
Some damage ; both of the joss-stick nozzles have been reduced in heigh, one nozzle has a small crack. Chips to the tails, possibly with some polishing. The Buddhist lion to the right doesn't sit flat on a surface, where the lions paw is on the brocaded ball is raised because of warping in the kiln.
Size
Height about 10.5 cm (4 inches).
Provenance
N/A
Stock number
25573 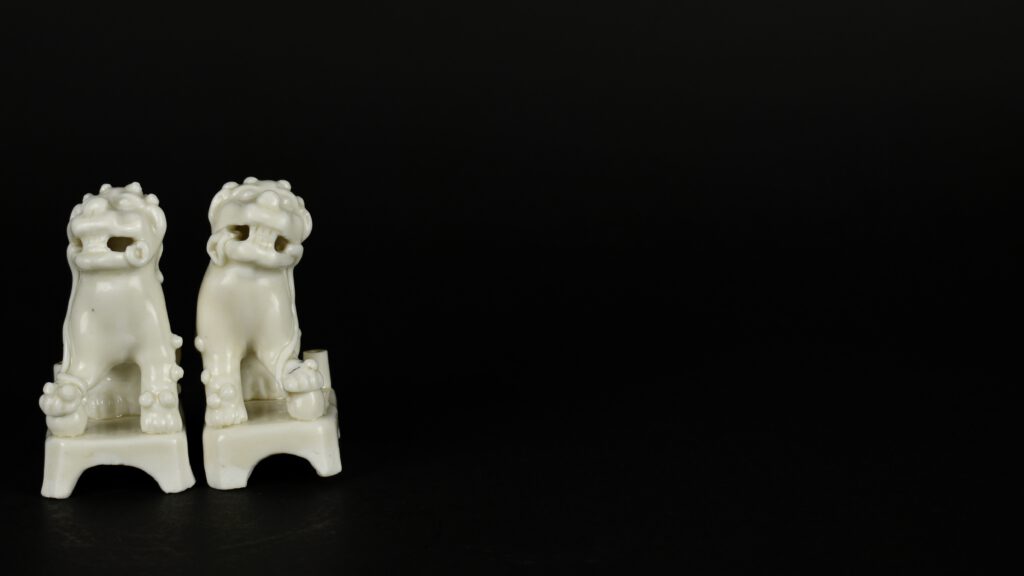 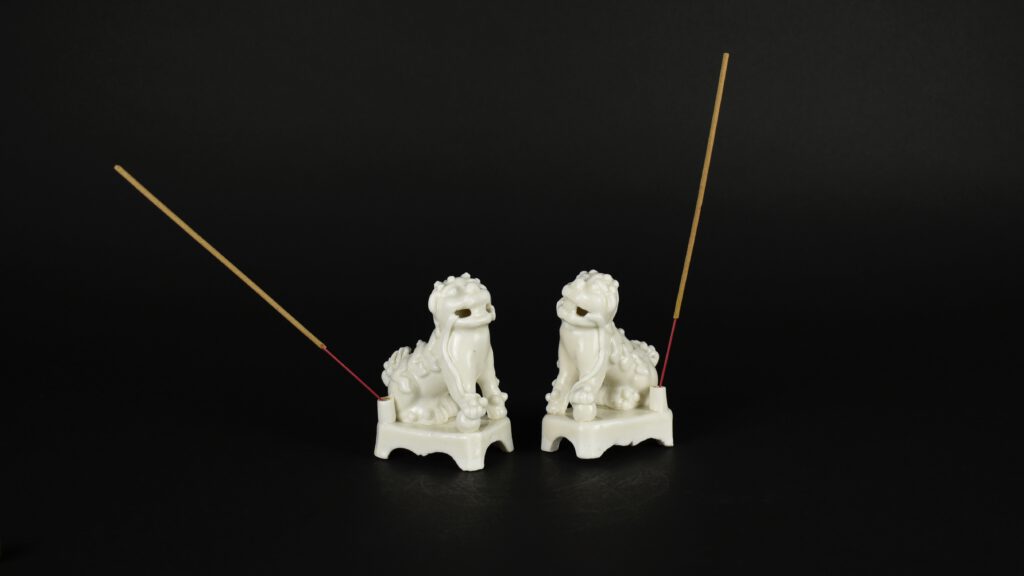 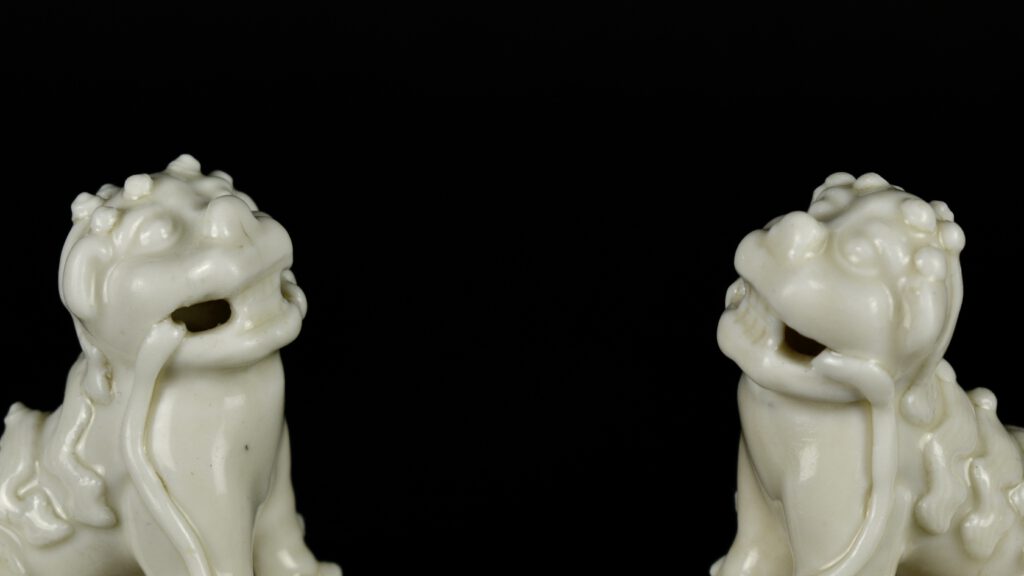 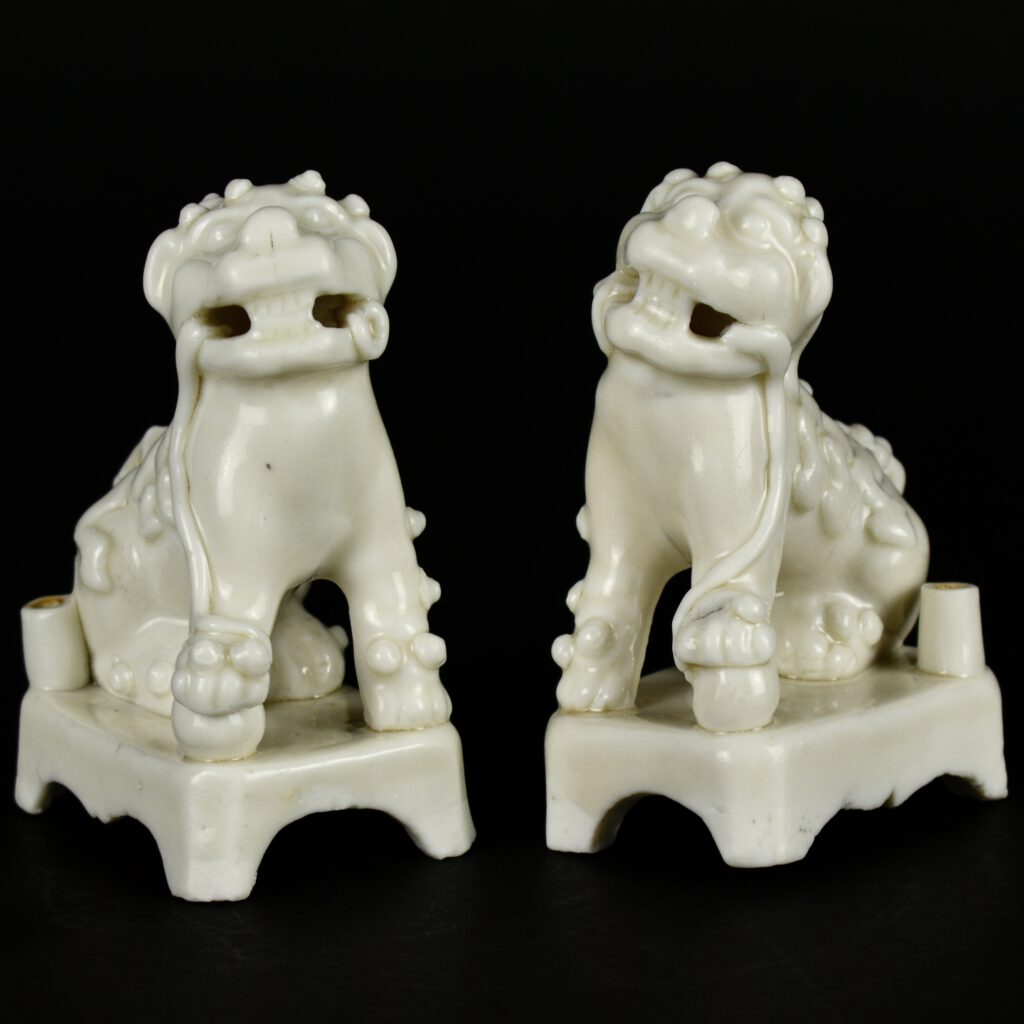 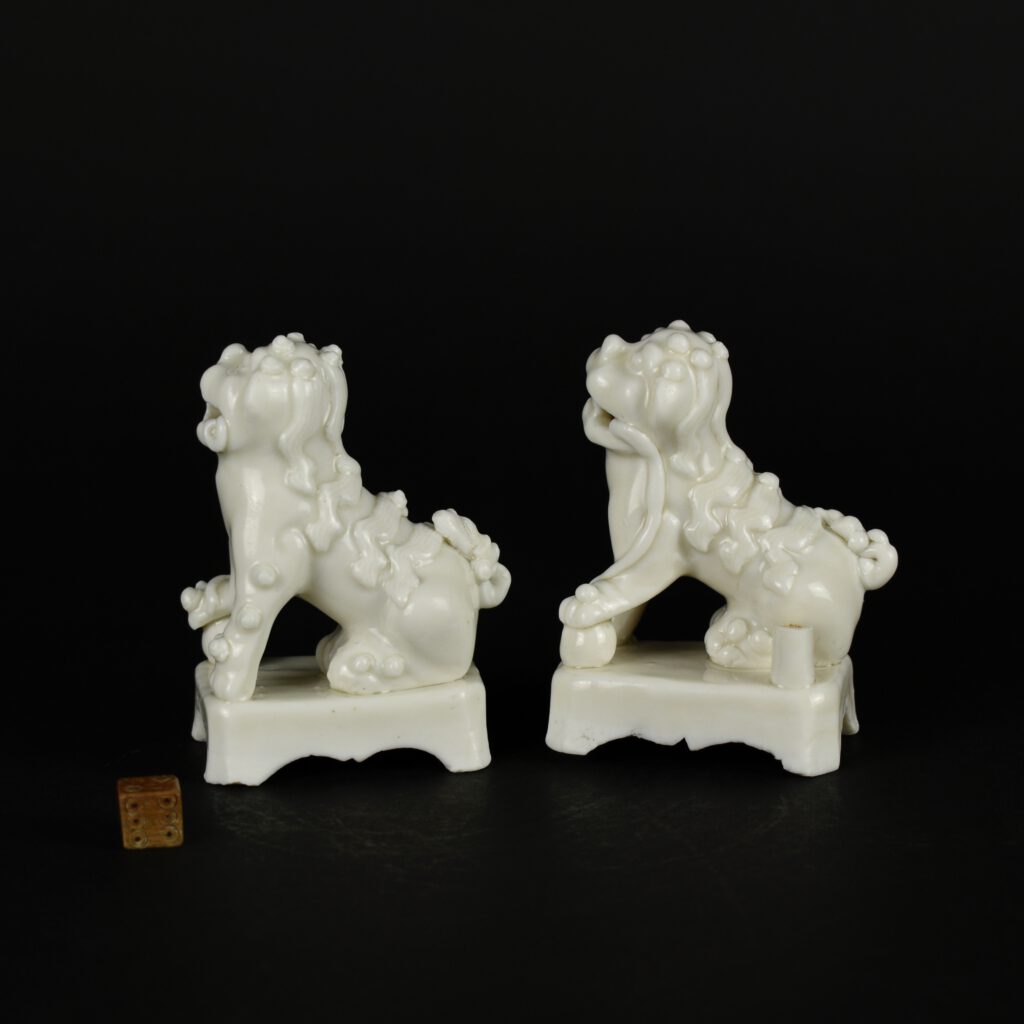 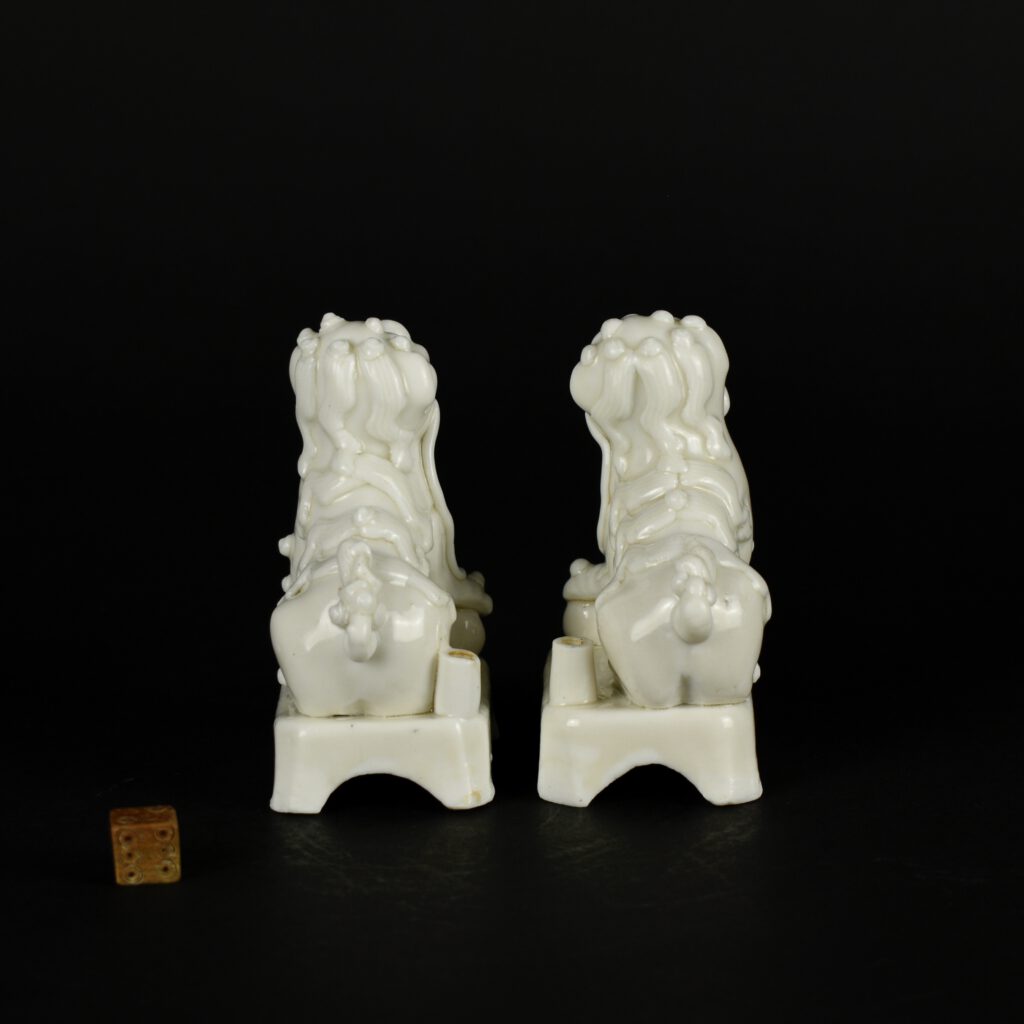 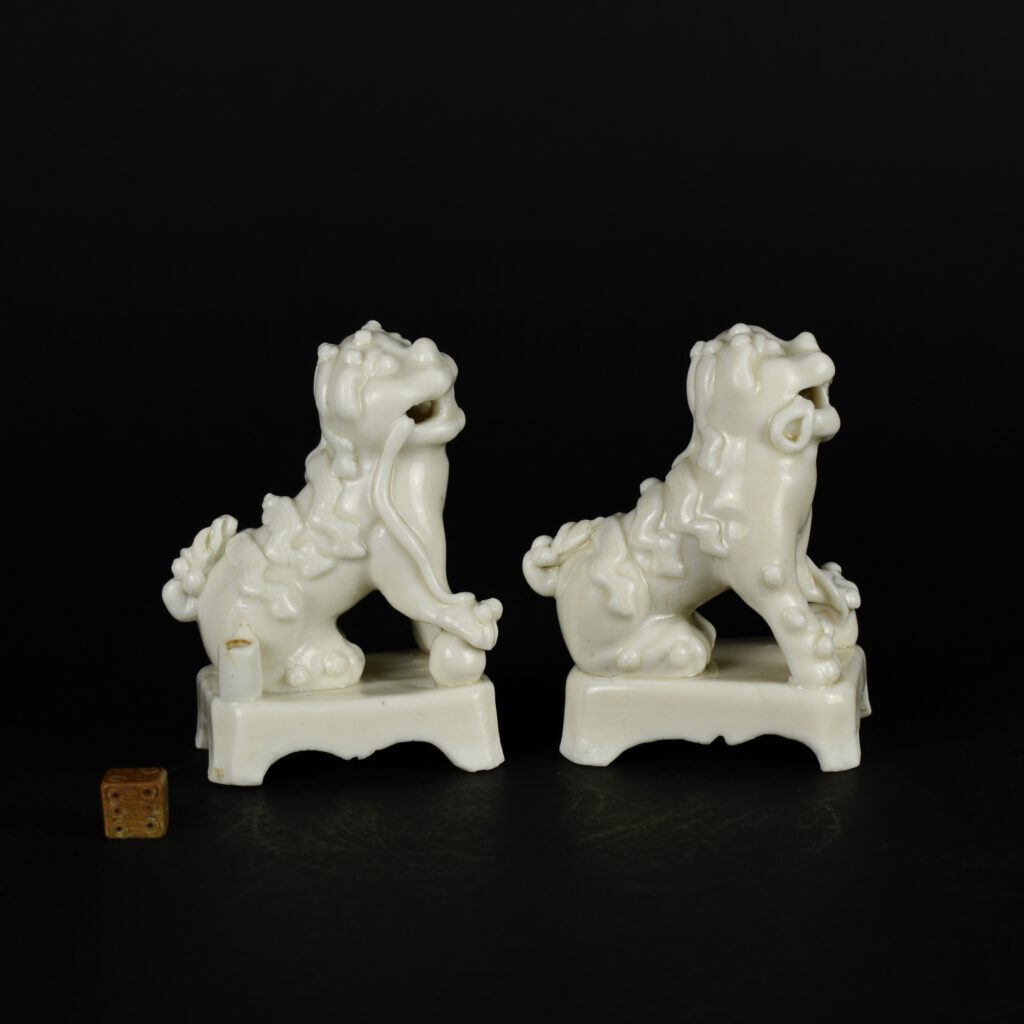 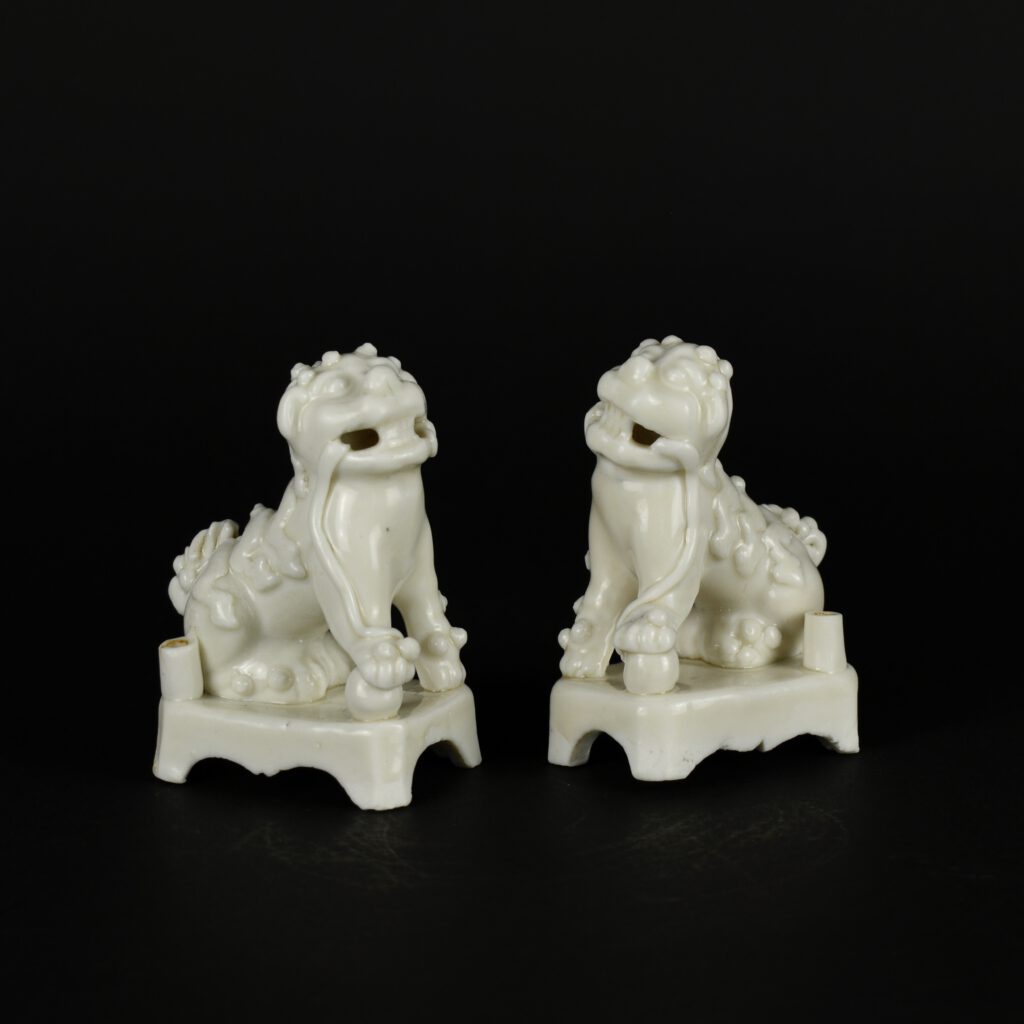 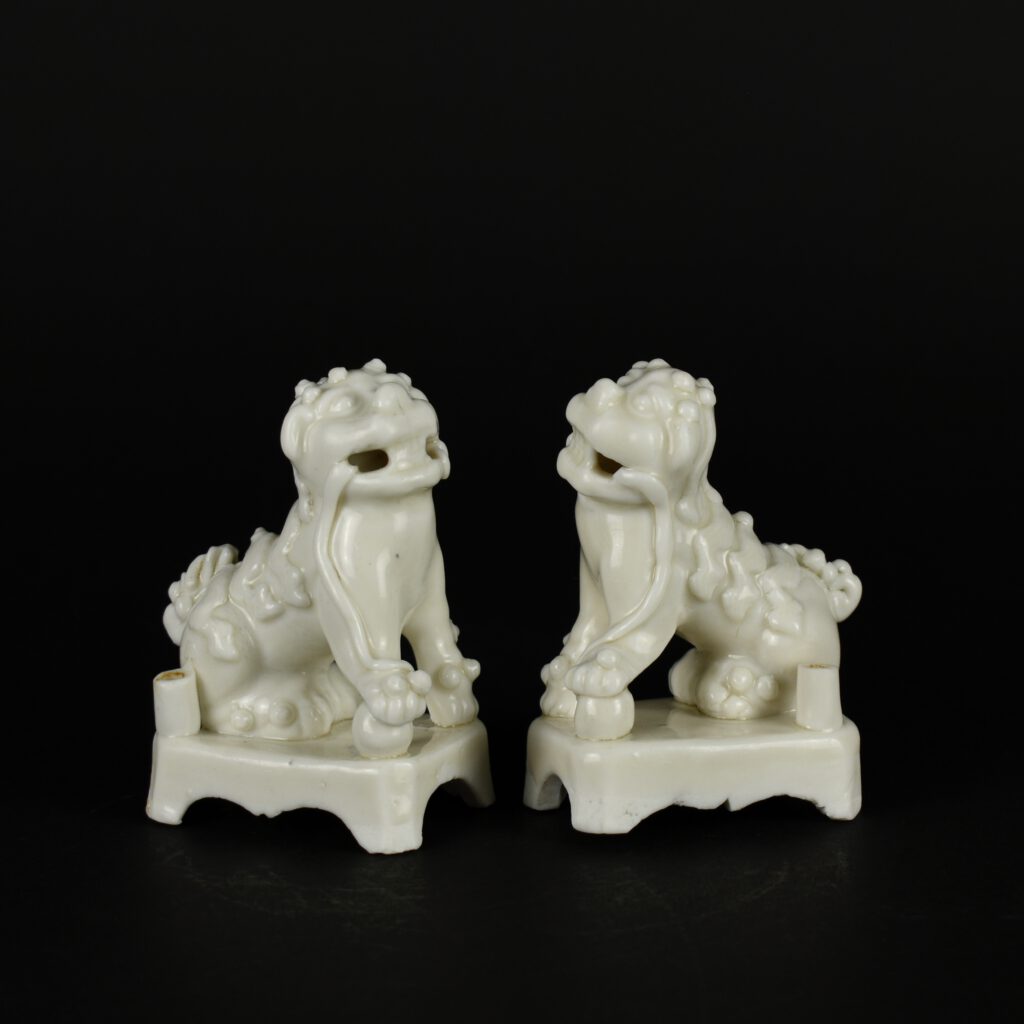 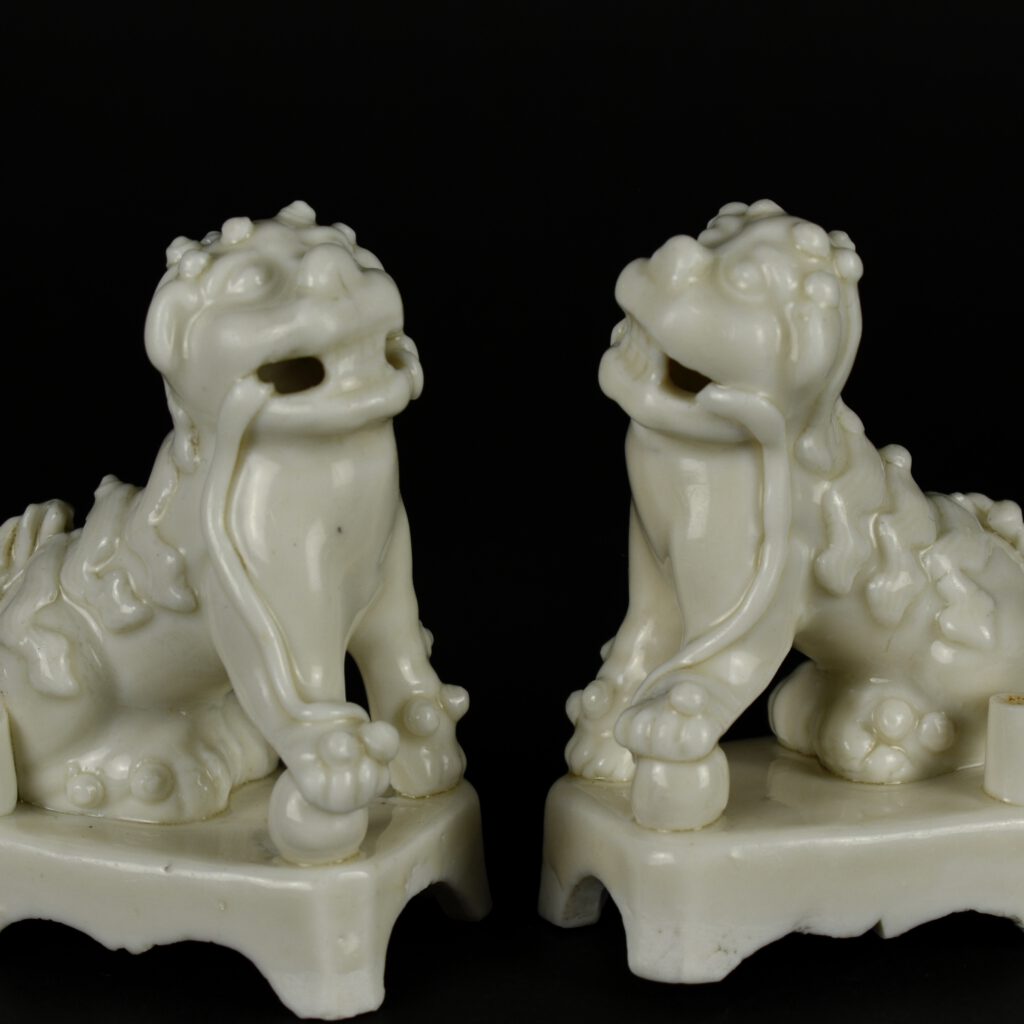 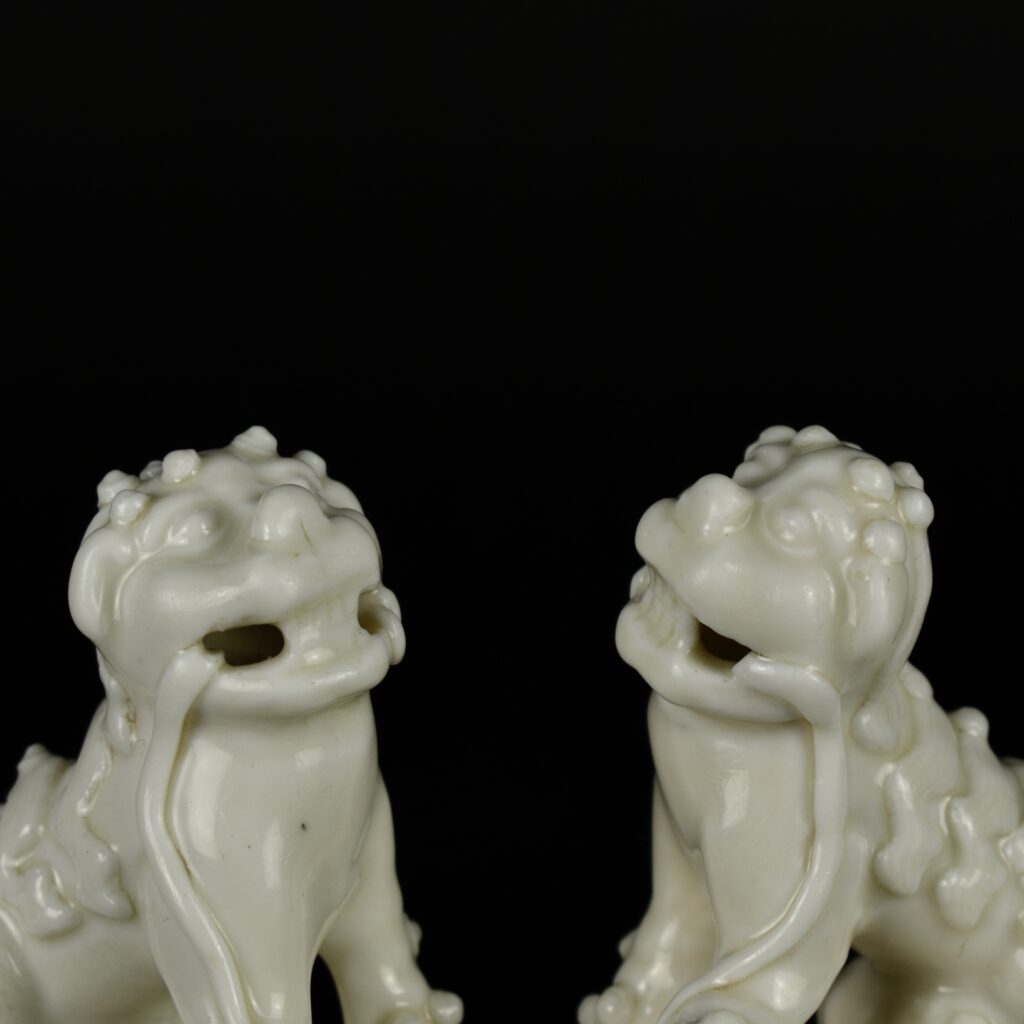 Blanc de Chine Fu Dogs / Buddhist Lions
Blanc de Chine Fu Dogs are difficult to date, they were made in the provincial kilns of Dehua in Fujian province. There are very many versions, all of which are rather similar but really following the same basic model. Technically the production didn`t change much either, on the whole the earlier models have more hand-working. However, the present example has more hand working than the early Blanc de Chine Fu dog from the Hatcher Cargo, datable to circa 1643 ( see `Sold Items` stock number 19961 ). The potting, glaze colour and general finish all point to a specific period but accurate dating is, I believe, very difficult. Fu Dog, Buddhist Lion, Fo Dog :
When Buddhist priests, or possibly traders, brought stories to China about stone dogs guarding the entry to Indian Buddhist temples, Chinese sculptors modelled statues after native dogs for use outside their temples. The mythic version of the animal, was known as the Dog of Fo, the word Fo being Chinese for Buddha. The Buddhist version of the dog was originally introduced to Han China as the protector of dharma and these dogs have been found in religious art as early as c.200 BC. Gradually they were incorporated as guardians of the Chinese Imperial dharm. However, Chinese sensitivity metamorphosed the dog into a lion, even though lions were not indigenous to China, since this seems more appropriate to the dignity of an emperor when he used the beasts to guard his gates. The mythic dog is sometimes associated with feng shui, and are often called Fu Dogs. Fu means `happiness` in Chinese; however, the term `Fu Dog` and its variant Foo Dog, are not used in Chinese. Instead, they are known as Rui Shi (`auspicious lions`) or simply Shi (lions). There are various styles of imperial guardian lions reflecting influences from different time periods, imperial dynasties, and regions of China. These styles vary in their artistic detail and adornment as well as in the depiction of the lions from fierce to serene.

Blanc de Chine Porcelain
The porcelain known in the West as Blanc de Chine was produced 300 miles south of the main Chinese kiln complex of Jingdezhen. The term refers to the fine grain white porcelain made at the kilns situated near Dehua in the coastal province of Fujian, these kilns also produced other types of porcelain. A rather freely painted blue and white ware, porcelain with brightly coloured `Swatow` type enamels as well as pieces with a brown iron-rich glaze. However, it is the white Blanc de Chine wares that have made these kilns famous. The quality and colour achieved by the Dehua potters was partly due to the local porcelain-stone, it was unusually pure and was used without kaolin being added. This, combined with a low iron content and other chemical factors within the body, as well as the glaze, enabled the potters to produce superb ivory-white porcelain. White porcelain was made at the Dehua kilns from early times, some books refer to the white porcelain produced during the Yuan period as being Blanc de Chine, but I think it is not really until the latter stages of the Ming dynasty, during the late 16th century, that a porcelain with clearly recognisable Blanc de Chine characteristics was produced. There is a theory that there was a brake in production during a large part of the 18th century. I am highly sceptical of this, it seams likely that Blanc de Chine porcelain was made all the way through, uninterrupted from the Ming dynasty to the present day.