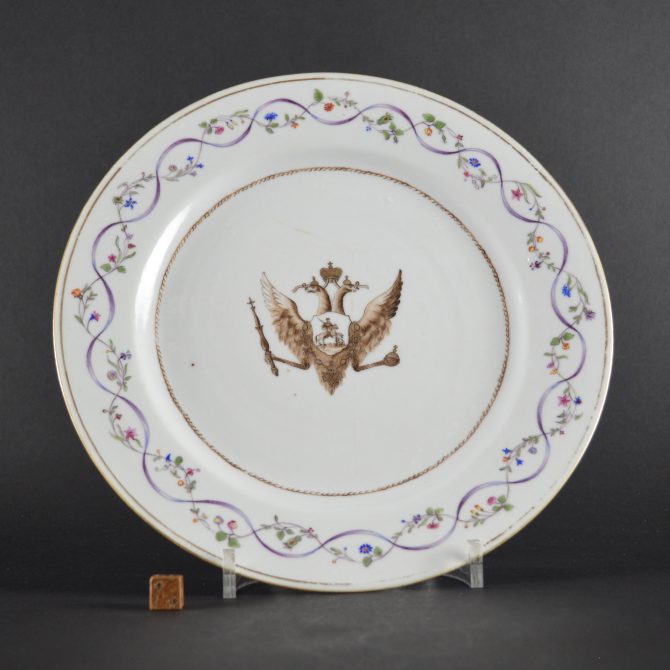 A Rare Chinese Armorial Porcelain Plate Made for Catherine the Great

A Rare Chinese Armorial Plate with the Imperial Russian Arms Made For Catherine the Great in About c.1785. The center is the Imperial Arms of Russia, the Imperial Double-Headed Eagle, charged on the Breast with St.George and the Dragon. The Crowned Eagle is clasping the Sceptre and Orb in it`s talons. The border is in a rather loose version of the Neo-Classical style with garden flowers intertwined with a ribbon. 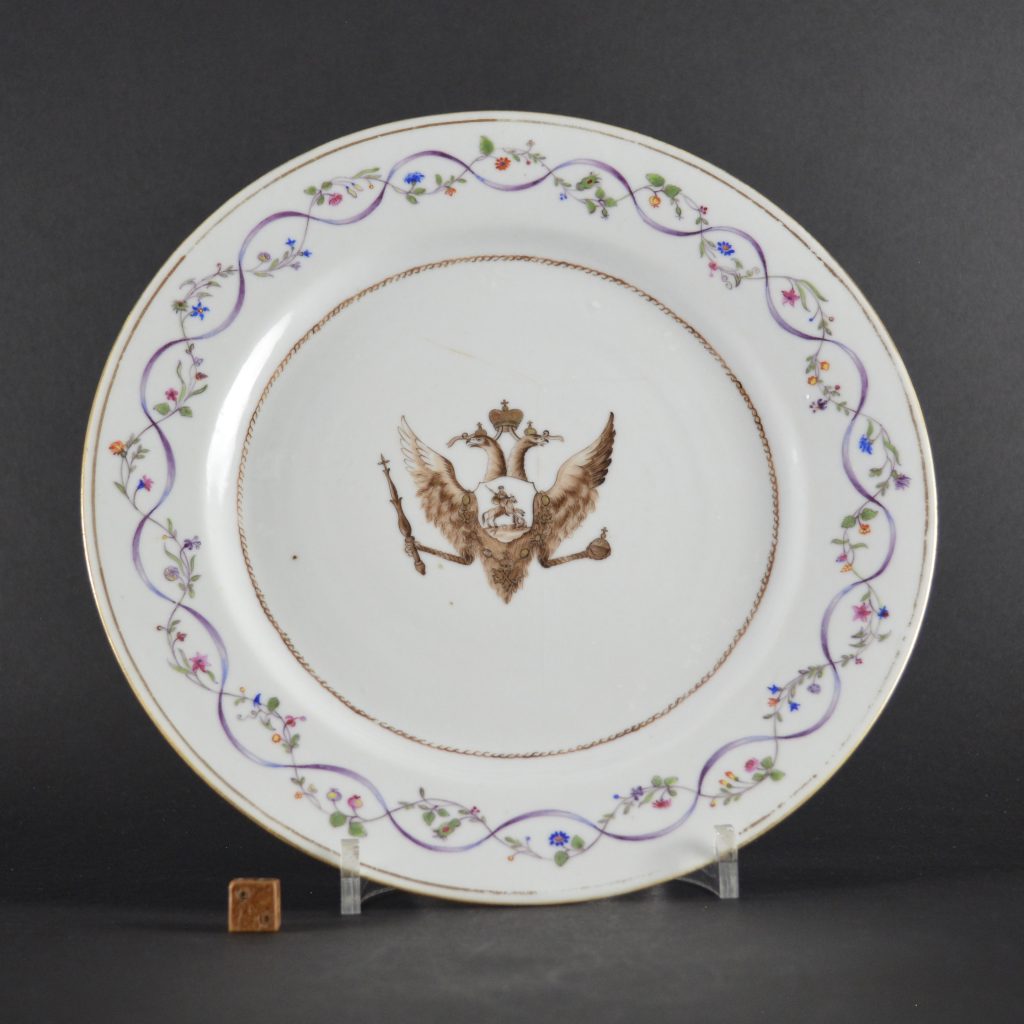 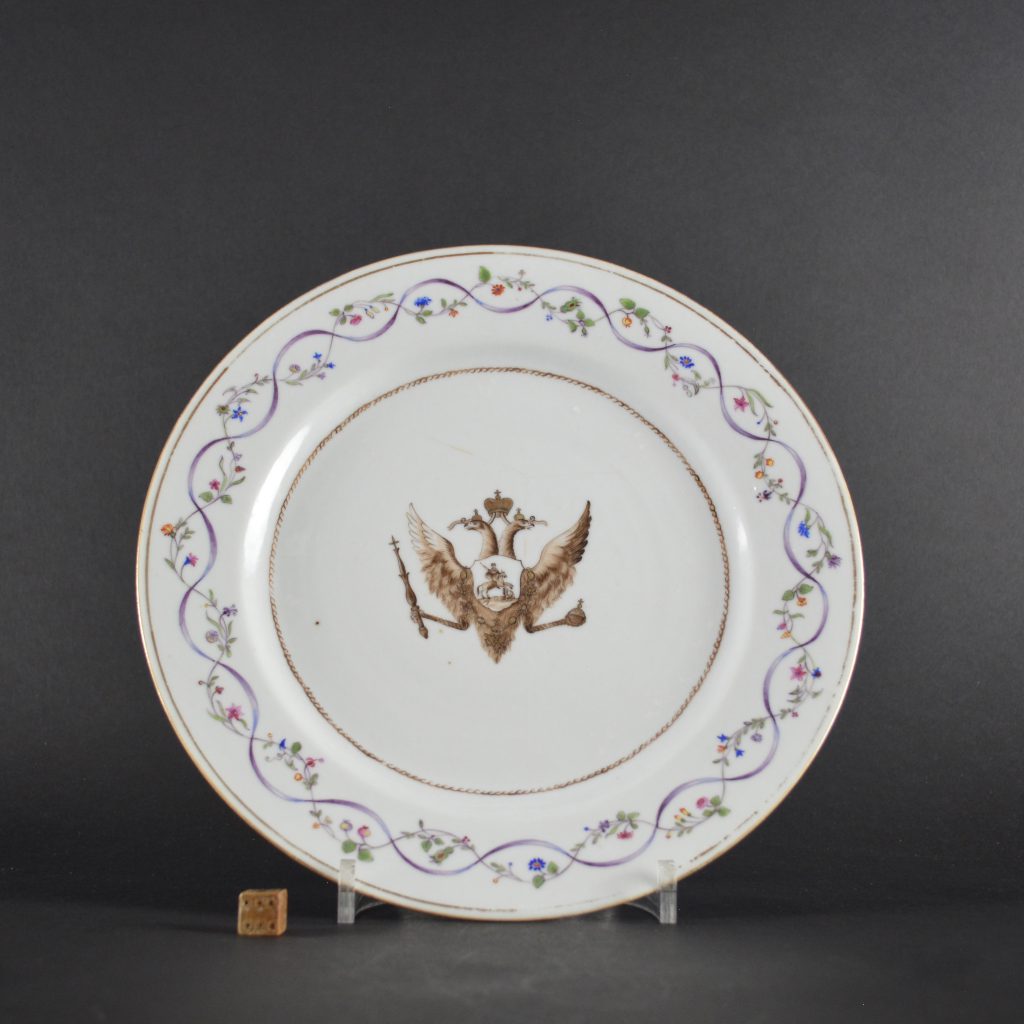 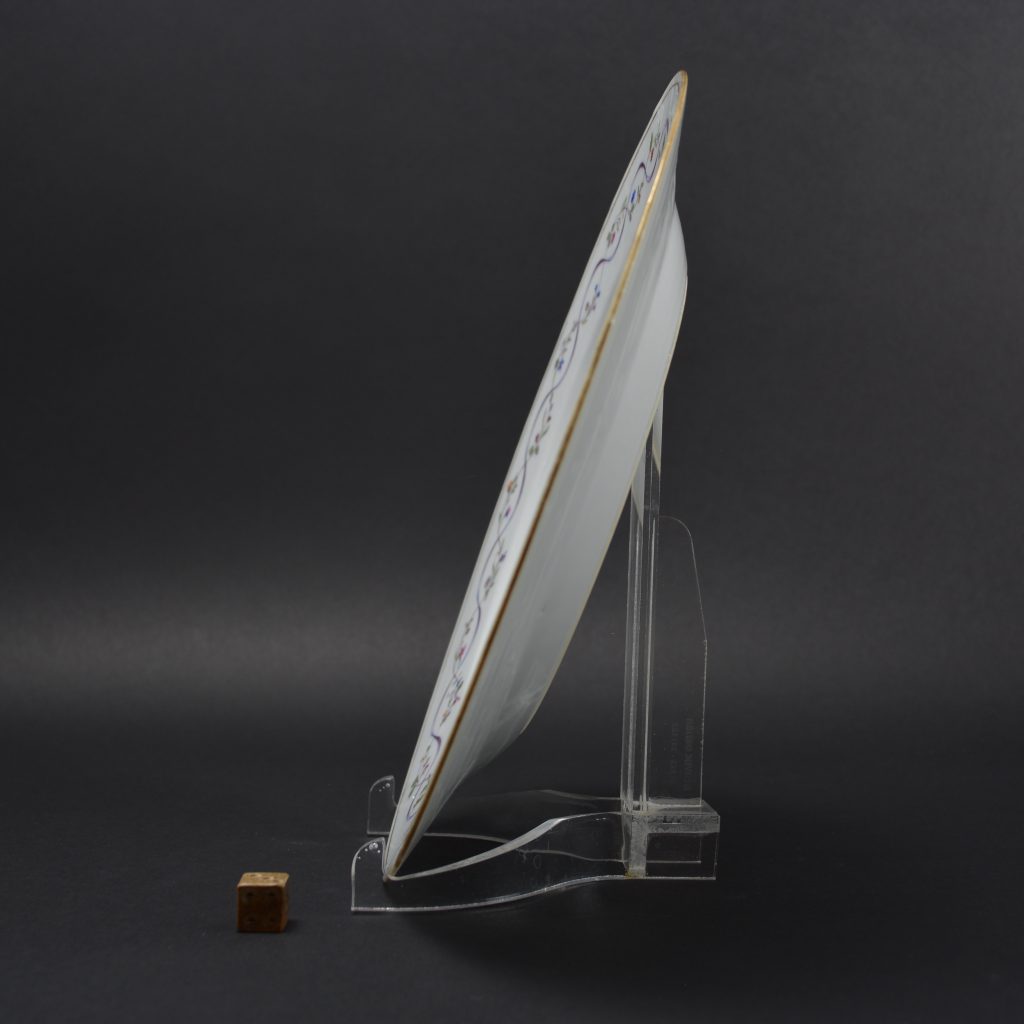 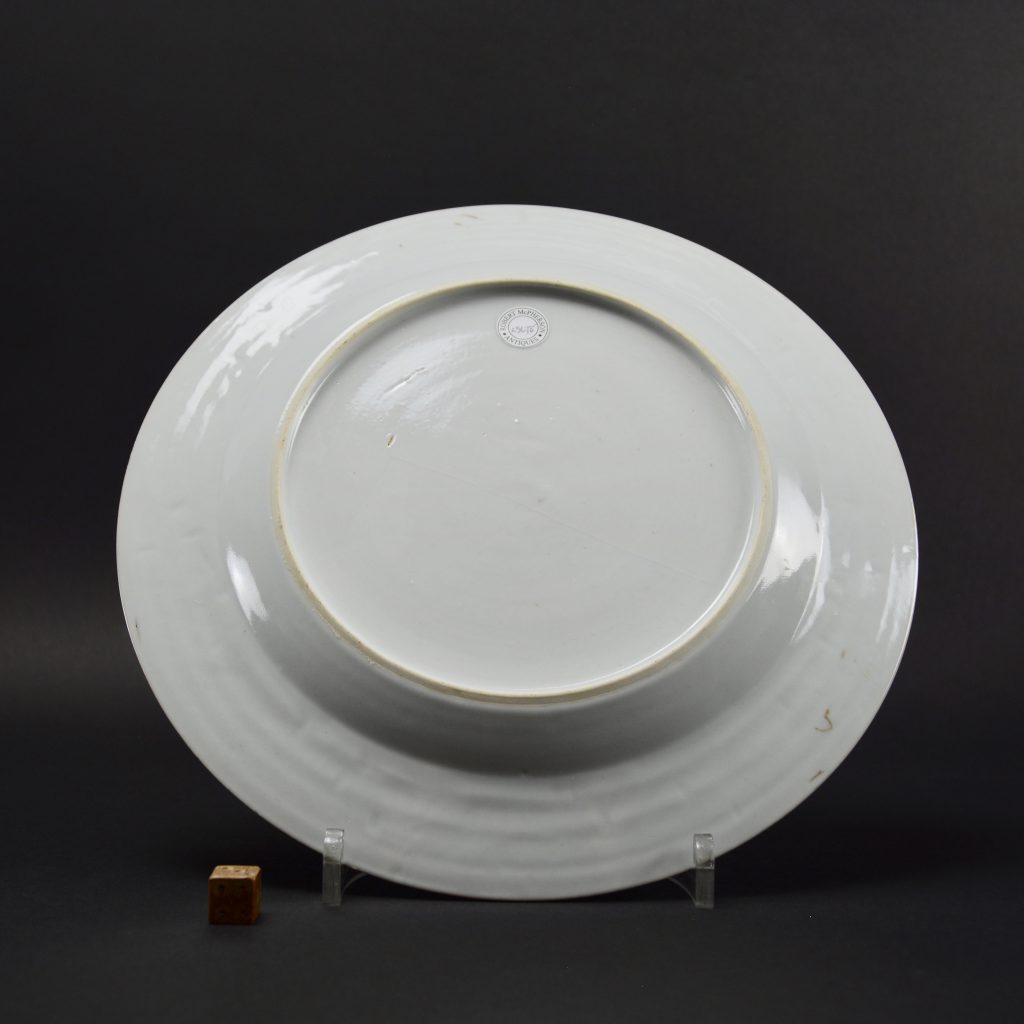 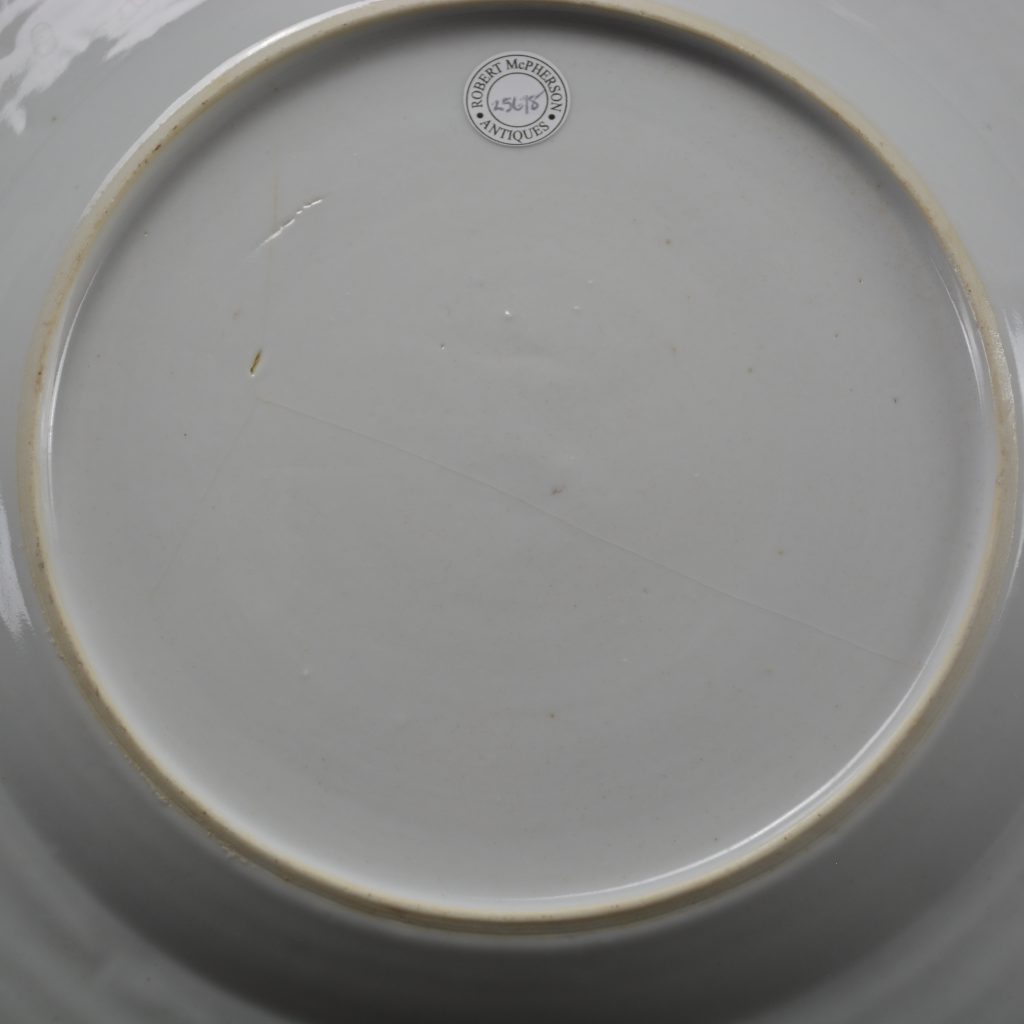 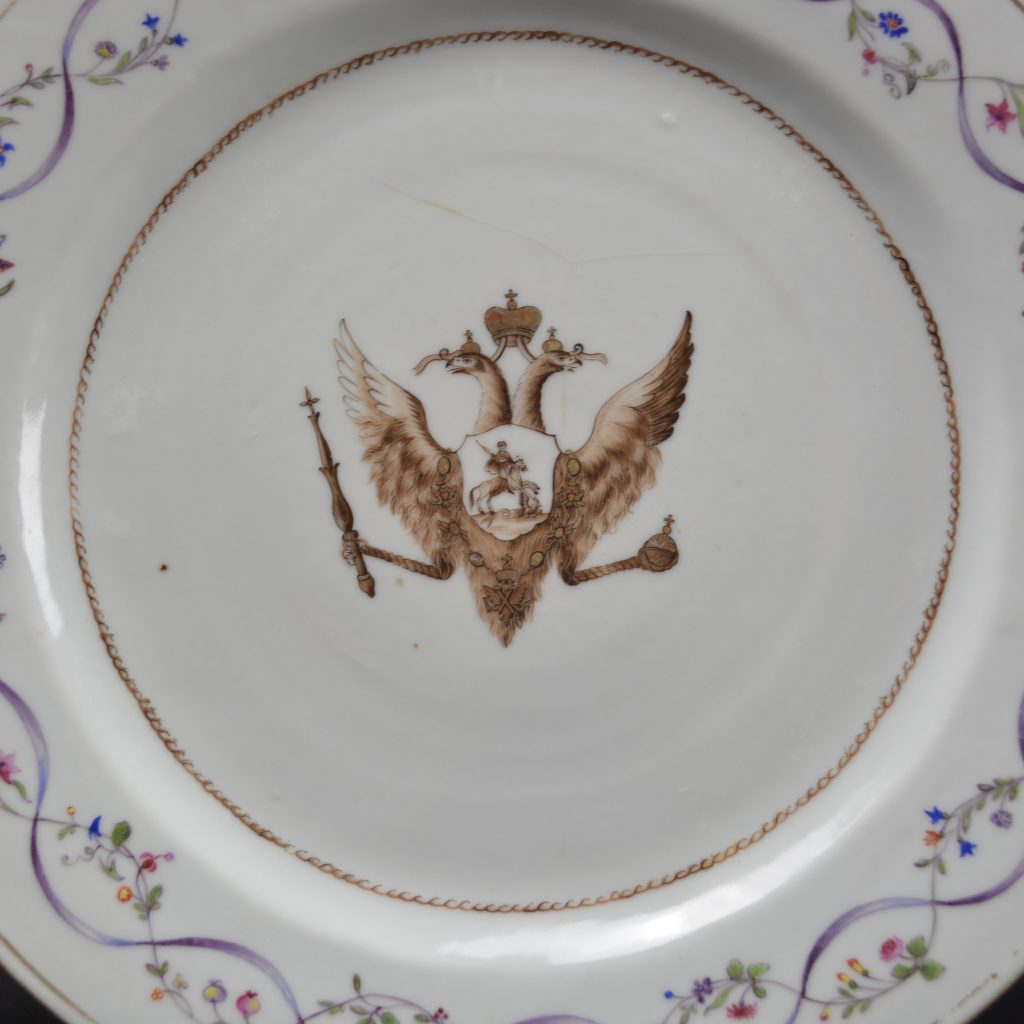 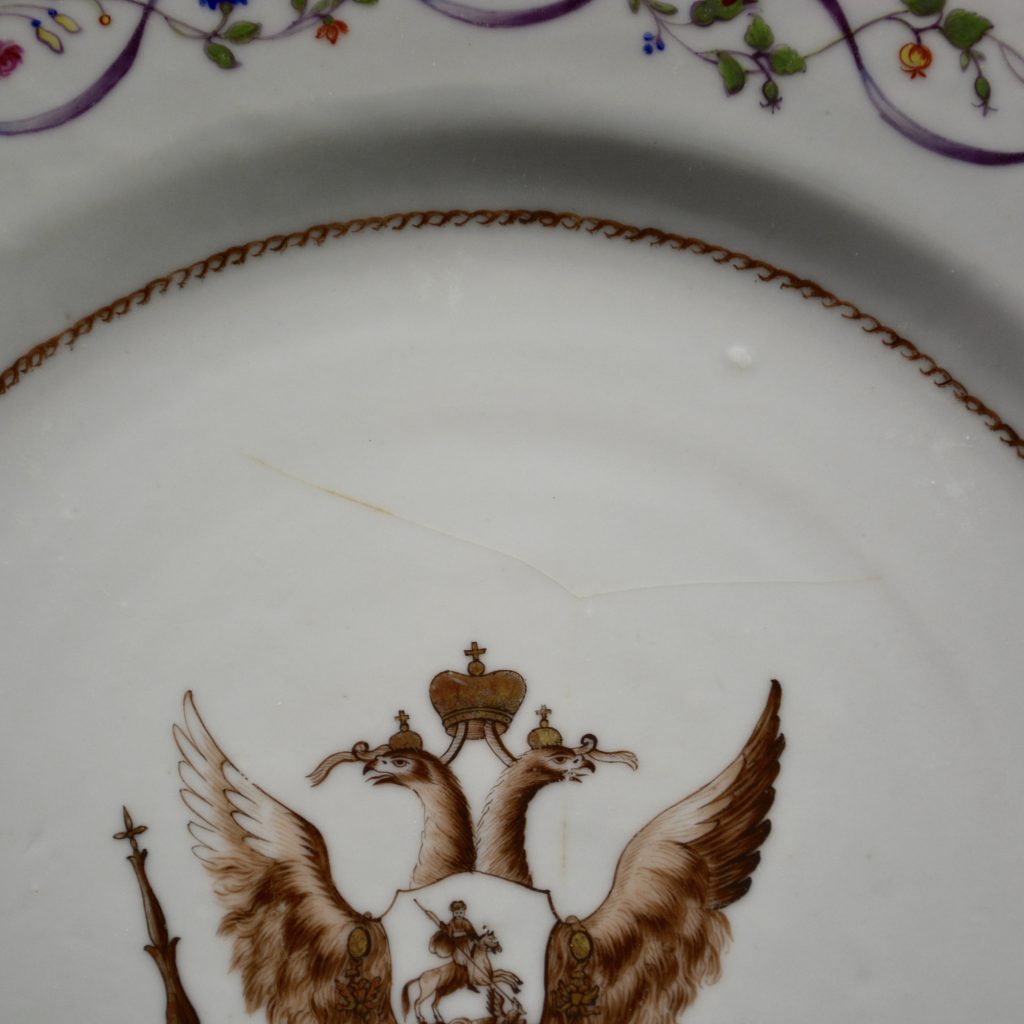 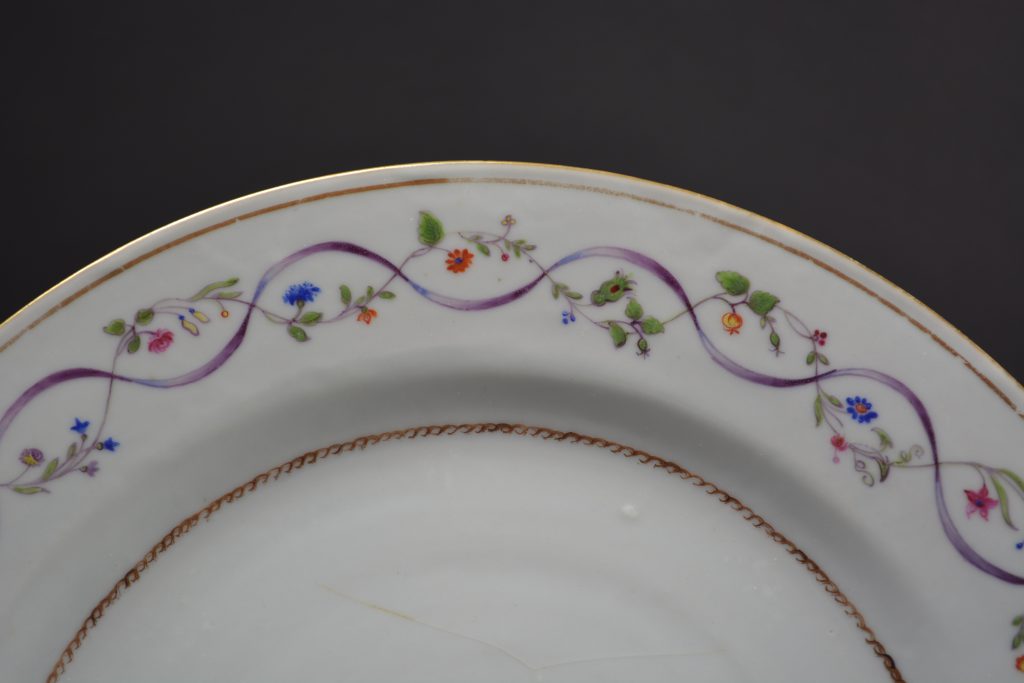 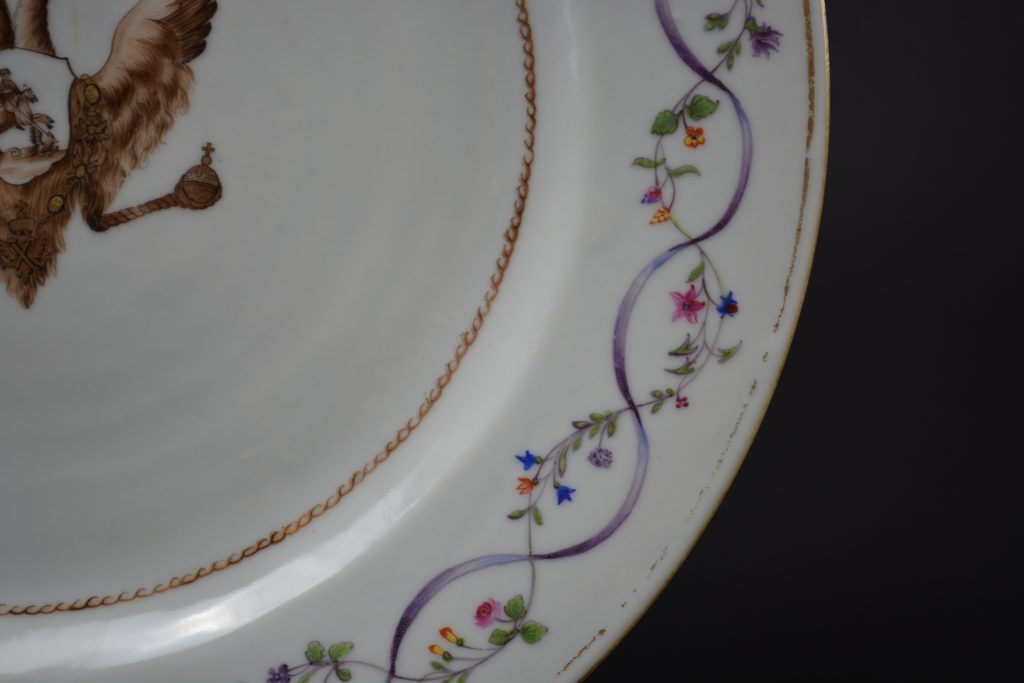 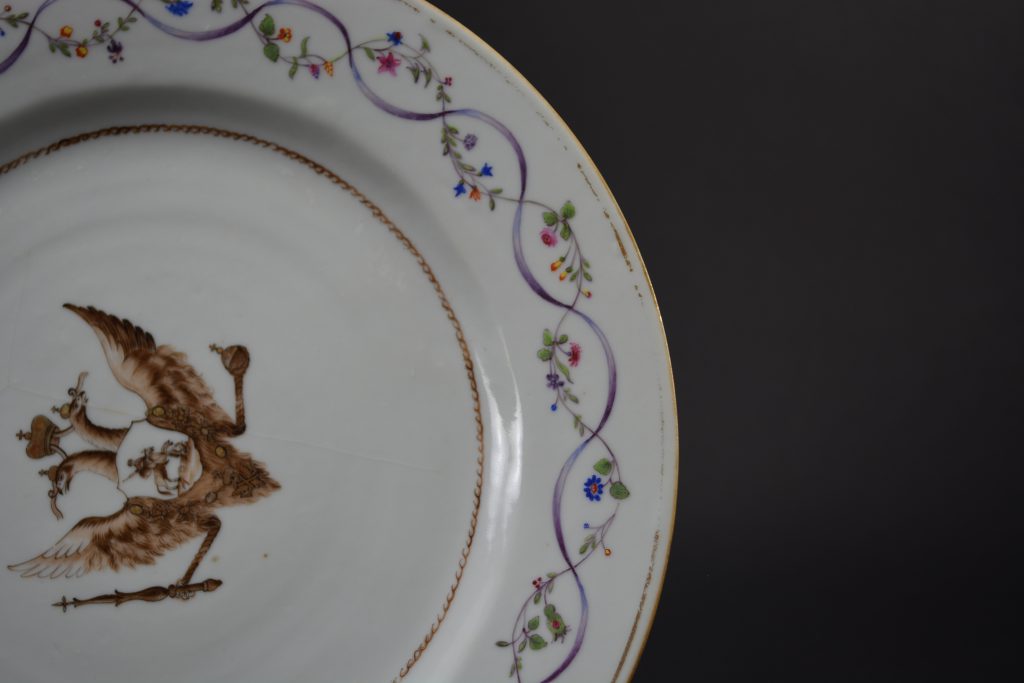 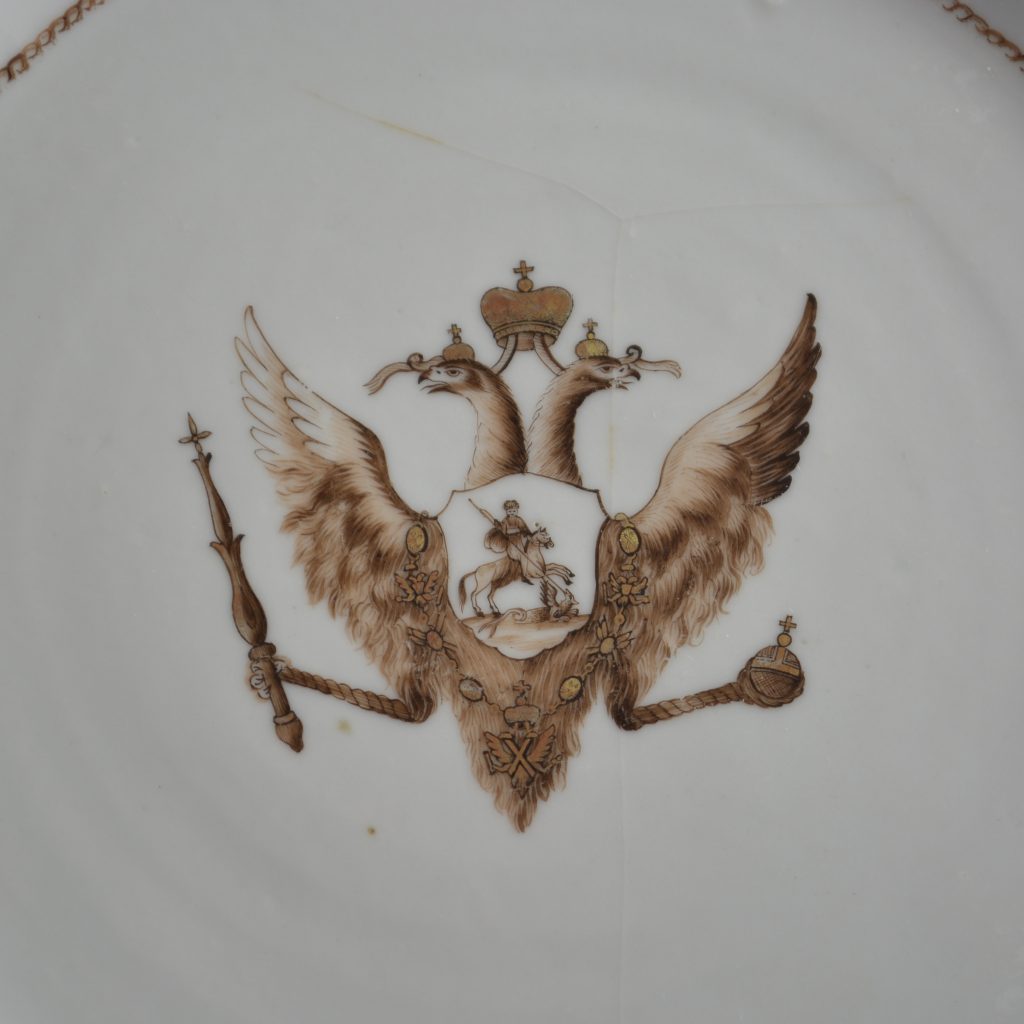 The Tea Canister from the Catherine the Great Service of c.1785

A Rare Chinese Armorial Tea Canister with the Imperial Russian Arms Made For Catherine the Great in About c.1785. The Center is the Imperial Arms of Russia, The Imperial Double-Headed Eagle, Charged on the Breast with St.George and the Dragon. The Crowned Eagle is Clasping the Sceptre and Orb in it`s Talons. The Border in a Rather Free Version of the Neo-Classical with Garden Flowers Intertwined with a Ribbon. This Canister is Particularly Rare as it Comes from a tea Service, Most Pieces with these Arms Are Dinner wear, Primarily Plates and Dishes . 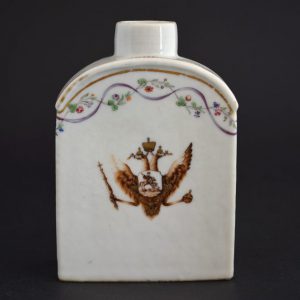 The Catherine the Great Service of c.1785
A rather grand Chinese export porcelain service was made for Catherine the Great in about 1745, the service made in around 1785 is more austere and reflects the Neo-Classical taste popular in Europe at the time. The naturalistically painted flowers intertwined with a purple ribbon are thought to be inspired by Wedgwood from whom Catherine the Great ordered a service in 1773 (completed in the summer of 1774), this famous service is known as the frog service or green frog service. Nearly all of the pieces encountered from the Chinese Catherine the Great Service of c.1785 are from a dinner service. Because there was no direct trade between Russia and China the service would probably have been imported by the British East India Company. Christen Steward wrote "It was probably from Friedrich II of Prussia that Catherine learned that an art collection of first rank could serve her imperial ambitions almost as effectively as an imperial army" (The Private Taste of the Romanovs in Eighteenth Century Russia). A plate in the Metropolitan Museum of Art bares the inventory mark of Gatchina, the summer palace. Catherine the Great took such a great liking of the Gatchina Palace and park, that she bought it and presented it to her son, the future Emperor Paul I.

Catherine the Great
Yekaterina Alexeevna, Catherine II, known as Catherine the Great was born in 1729. She reigned from 1762 until her death in 1796. She came to power following a coup d`état and the assassination of her husband, Peter III, at the end of the Seven Years` War. Russia was revitalized under her reign, growing larger and stronger than ever and becoming recognized as one of the great powers of Europe. For more information see
http://en.wikipedia.org/wiki/Catherine_the_Great 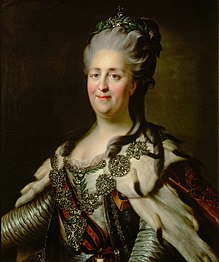 The 'Frog Service' was a 50-person set intended for dinner and dessert. Catherine the Great bought it for her Gothic summer palace built in a frog marsh some miles outside St Petersburg -- hence the inclusion of the frog motif. The service was painted with a total of 1222 views of British landscapes, antiquities and gardens. It cost £2,290 and was intended for occasional use, not for display alone. In the event this particular dish was not sent to Russia, probably because it was replaced by one with a more interesting view.

Wedgwood's partner Thomas Bentley selected the views to go onto the service. This one shows the gardens at West Wycombe, Buckinghamshire, which were laid out by Sir Francis Dashwood in 1739-1752. The painter copied the view from an engraving by William Woollett (1735-1785).