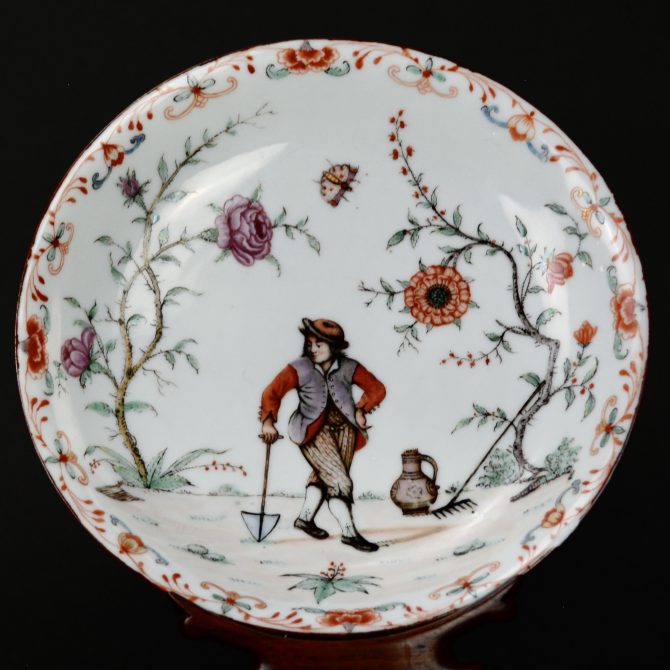 A Rare Dutch Decorated Fine-Line Saucer, Probably Related to the Share Collapes of 1720

A Rare Dutch Decorated Chinese Porcelain Saucer Decorated in the Fine-Line style c.1720-1725. The scene probably representing a ‘gold digger’ or speculator in the South Sea or Mississippi Company. The male figure holds a spade, he looks down at where it touches the ground. He is well dressed but his britches have a tear in them. His rake is resting next to a German stoneware jug and the scene is surrounded by flowering shrubs with a butterfly above his head. The Chinese underglaze blue mark on the back has been over-decorated in a different hand to the front, a lone Chinese figure is depicted within a small pavilion.

Spades in the Netherlands were associated with honest hard work, the builders of canals, the peasant farmer, people that made the country prosperous and kept it so. In the period, just before the crash of 1720, they were associated with ‘gold diggers’ and speculators, money was thrown around and then it all went wrong, share prices sank. It is likely this saucer is a comment on the disastrous share collapse of 1720. Helen Espir shows a Dutch decorated saucer with a woman holding a spade, next to her is caption Het is Wint, an allusion to the worthless ‘Wind trade’ of the South Sea Bubble which burst in 1720. See ; European Decoration on Oriental Porcelain 1700 – 1830 (Helen Espir, Jorge Welsh Books, 2005) see page 156. Popular prints and playing cards lampooned the collapse but Helen Espir wasn’t able to find a match for this specific design.

Condition
There is a shallow chip to the rim at 4 o'clock.
Size
Diameter 13.4cm (5 1/3 inches)
Provenance
N/A
Stock number
25857
References
For a beaker and saucer of this design in the Groningen Museum (Groningen, Netherlands) see : European Decoration on Oriental Porcelain 1700 - 1830 (Helen Espir, Jorge Welsh Books, 2005) see page 156 and photograph on page 157 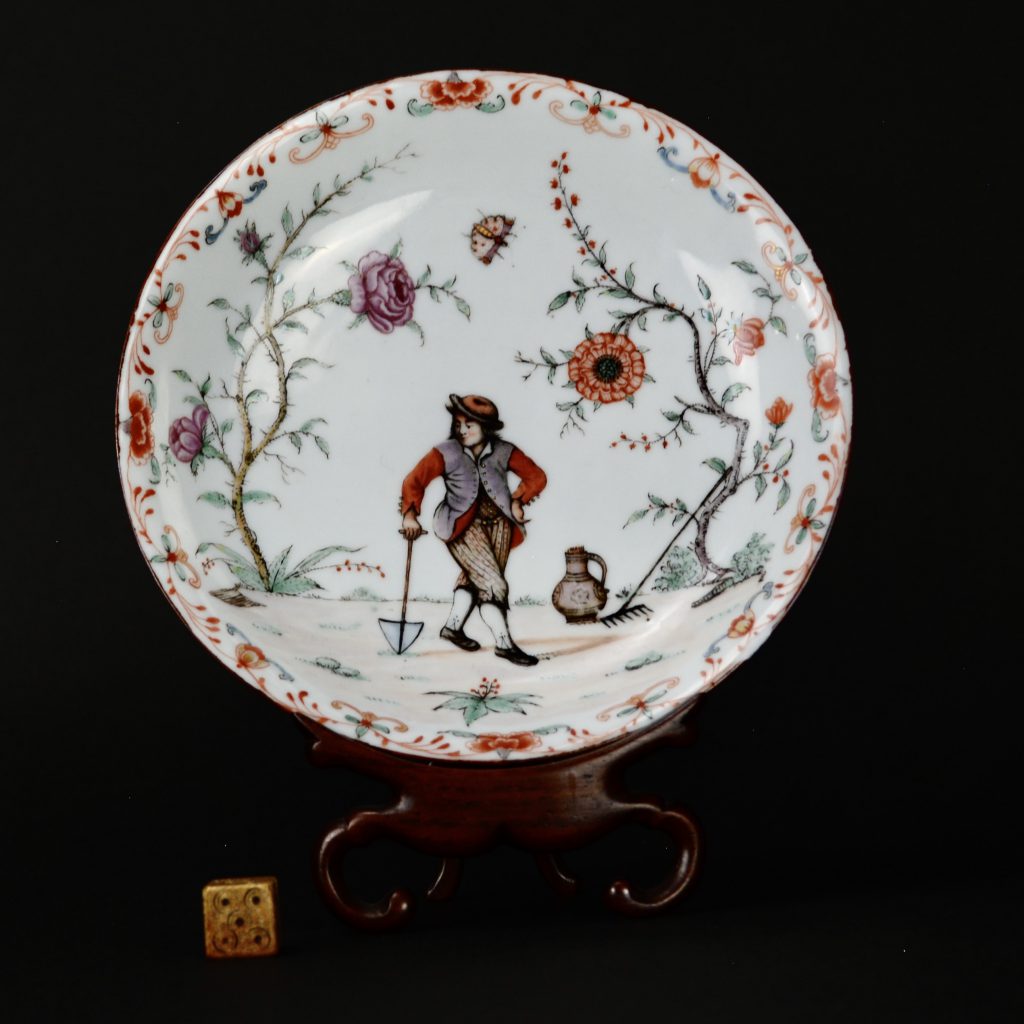 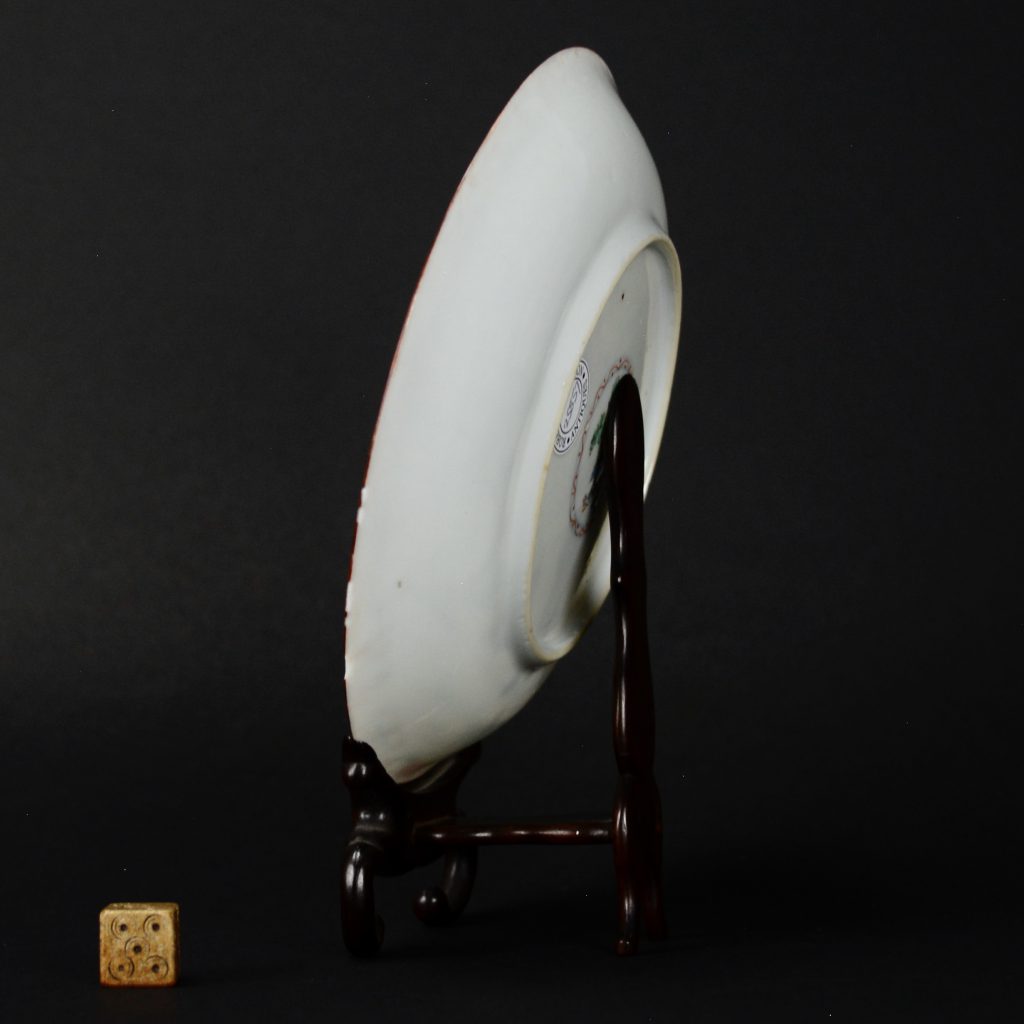 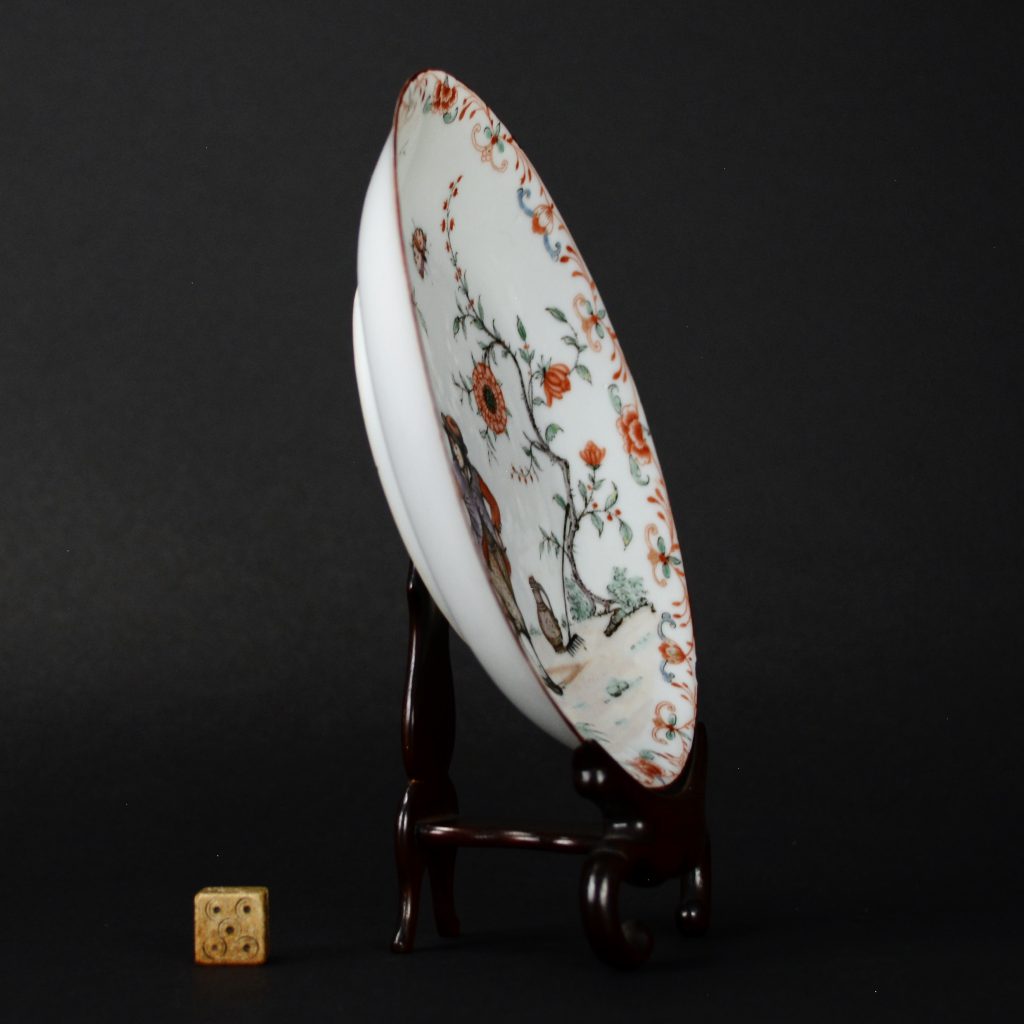 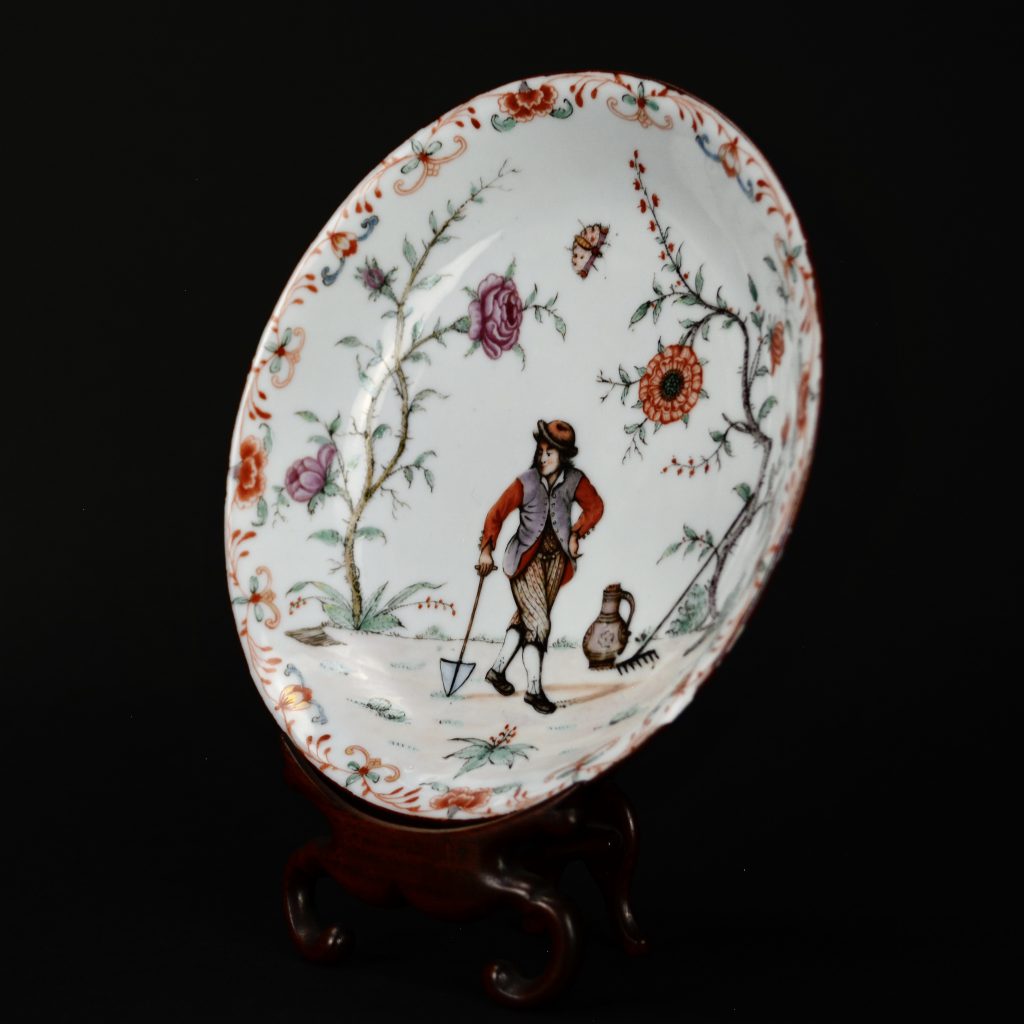 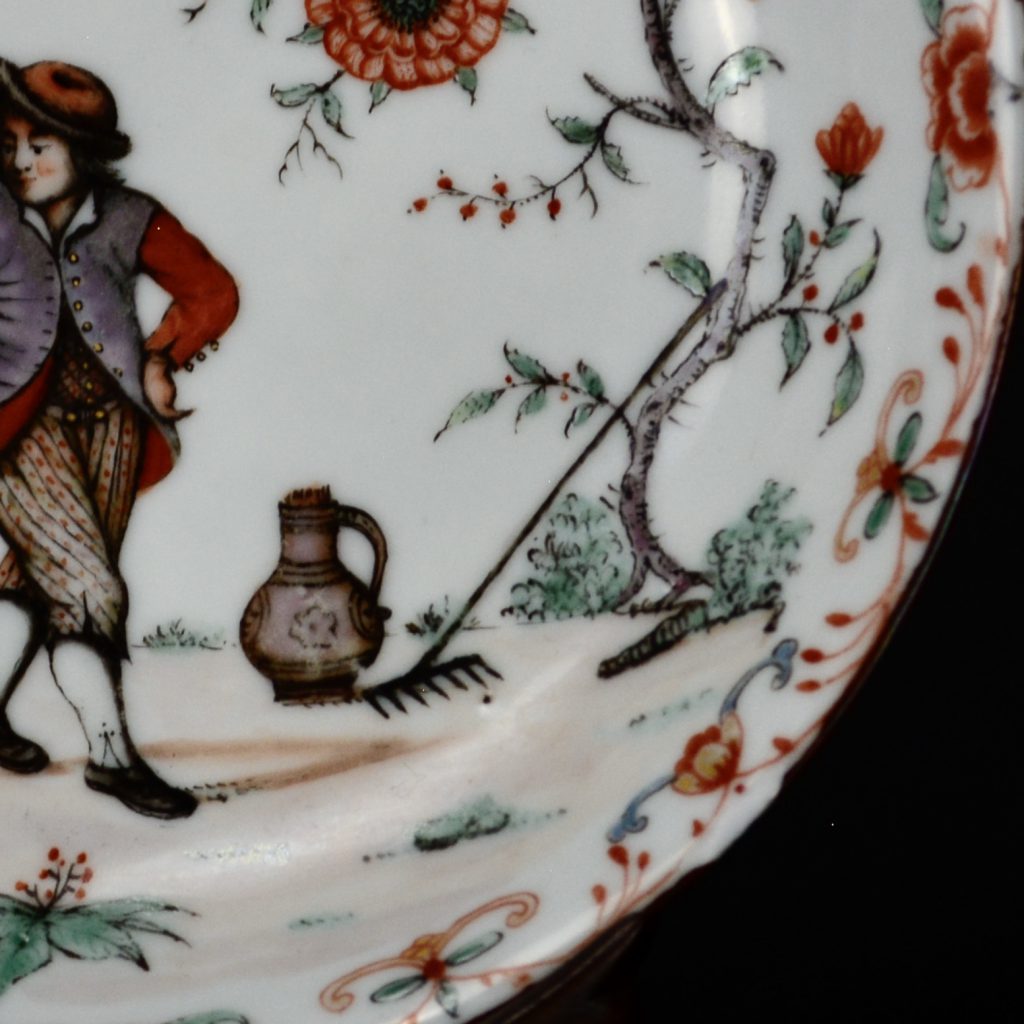 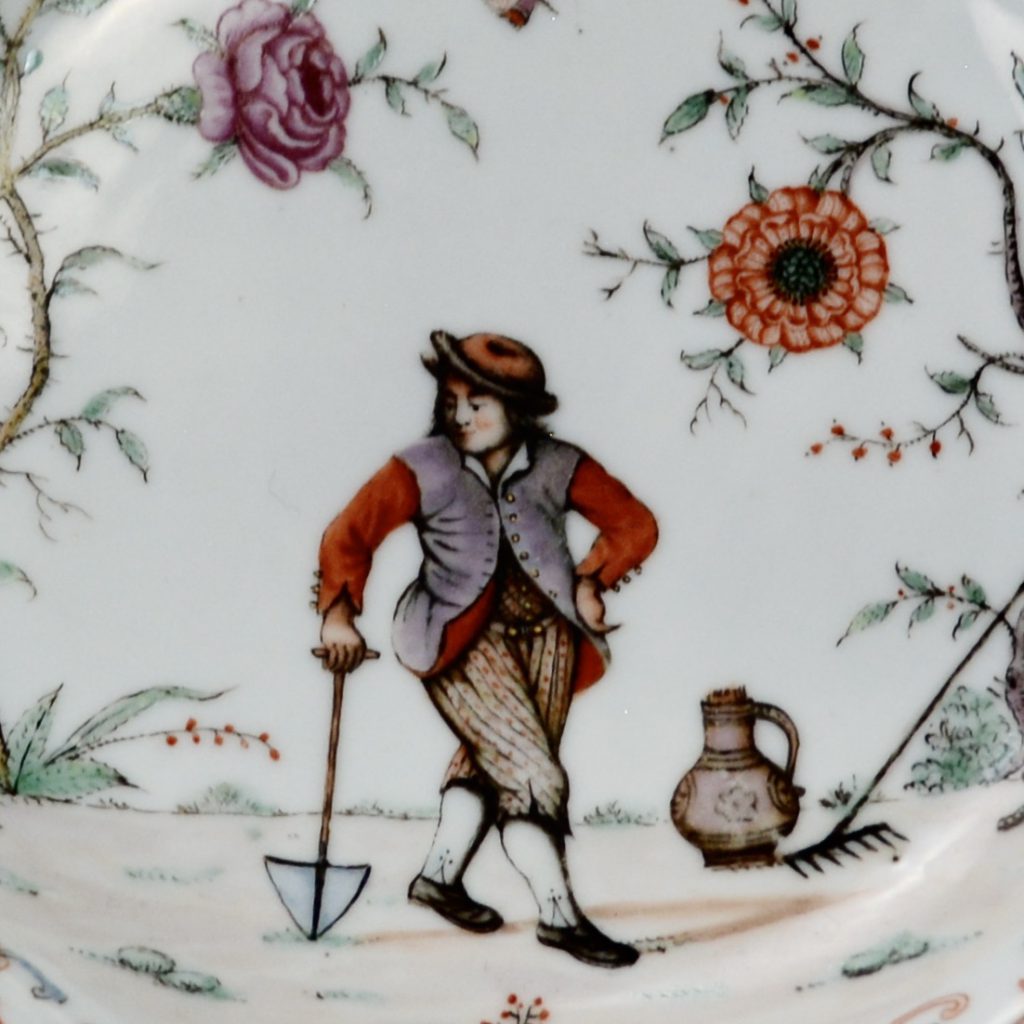 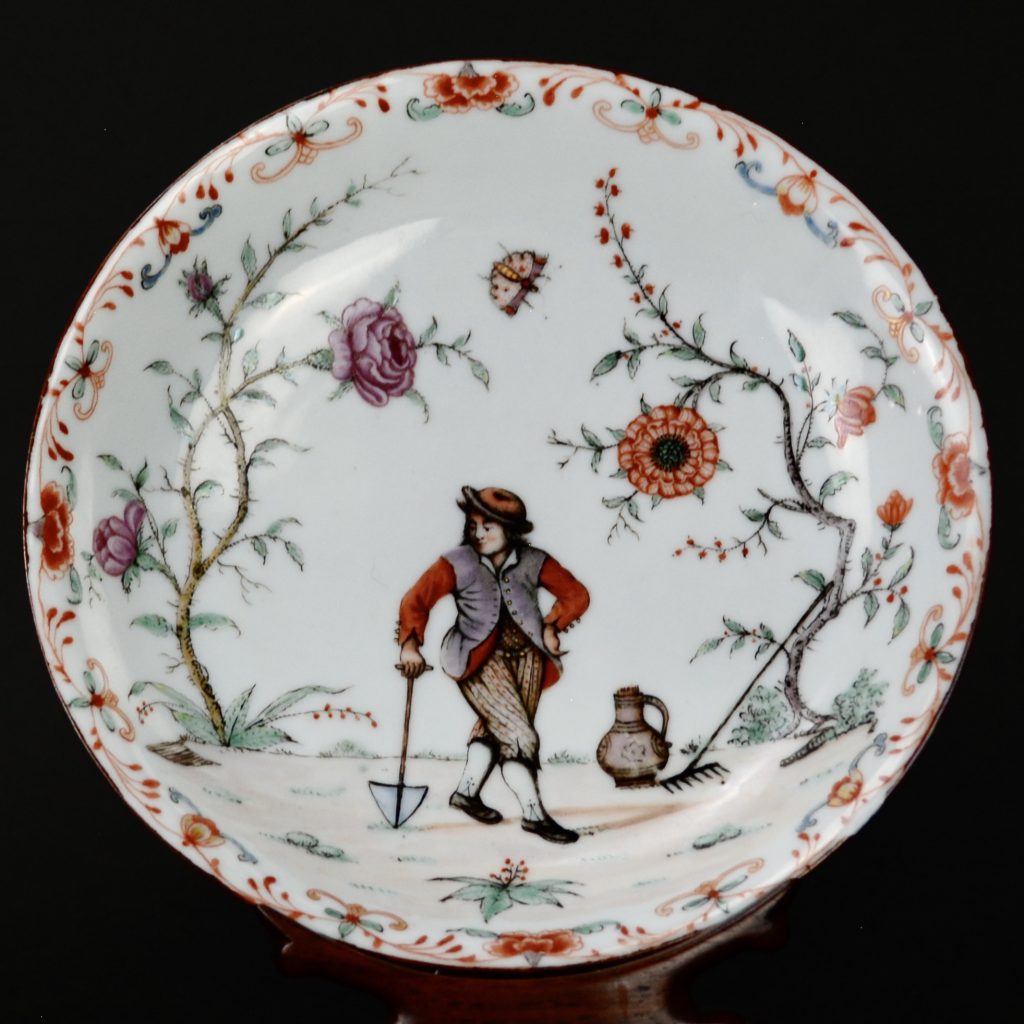 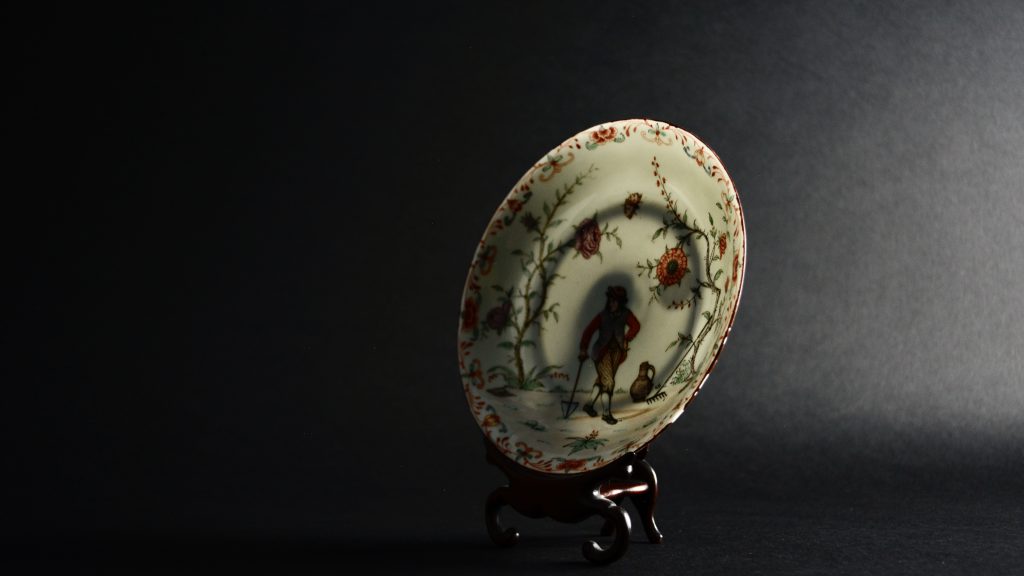 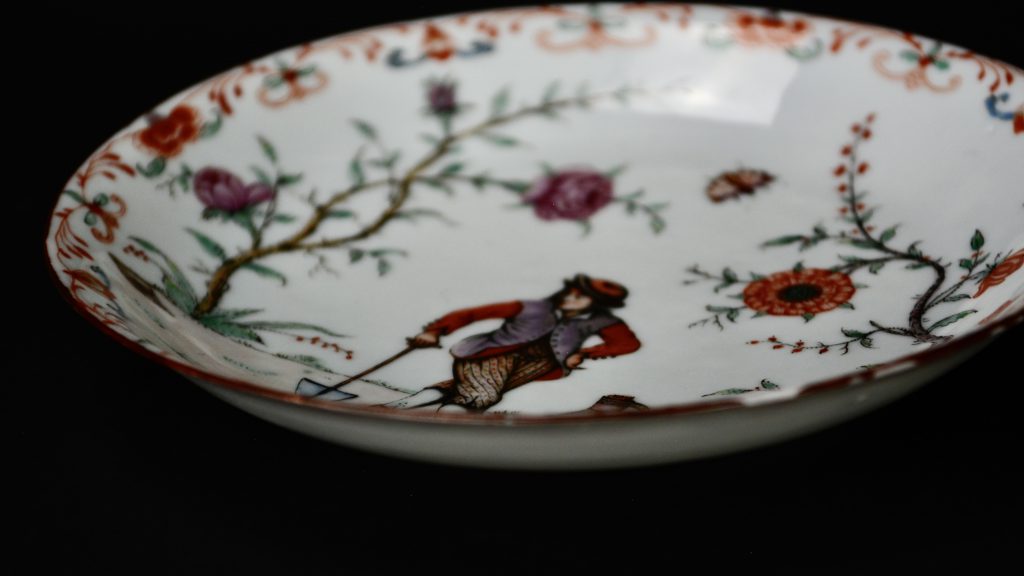 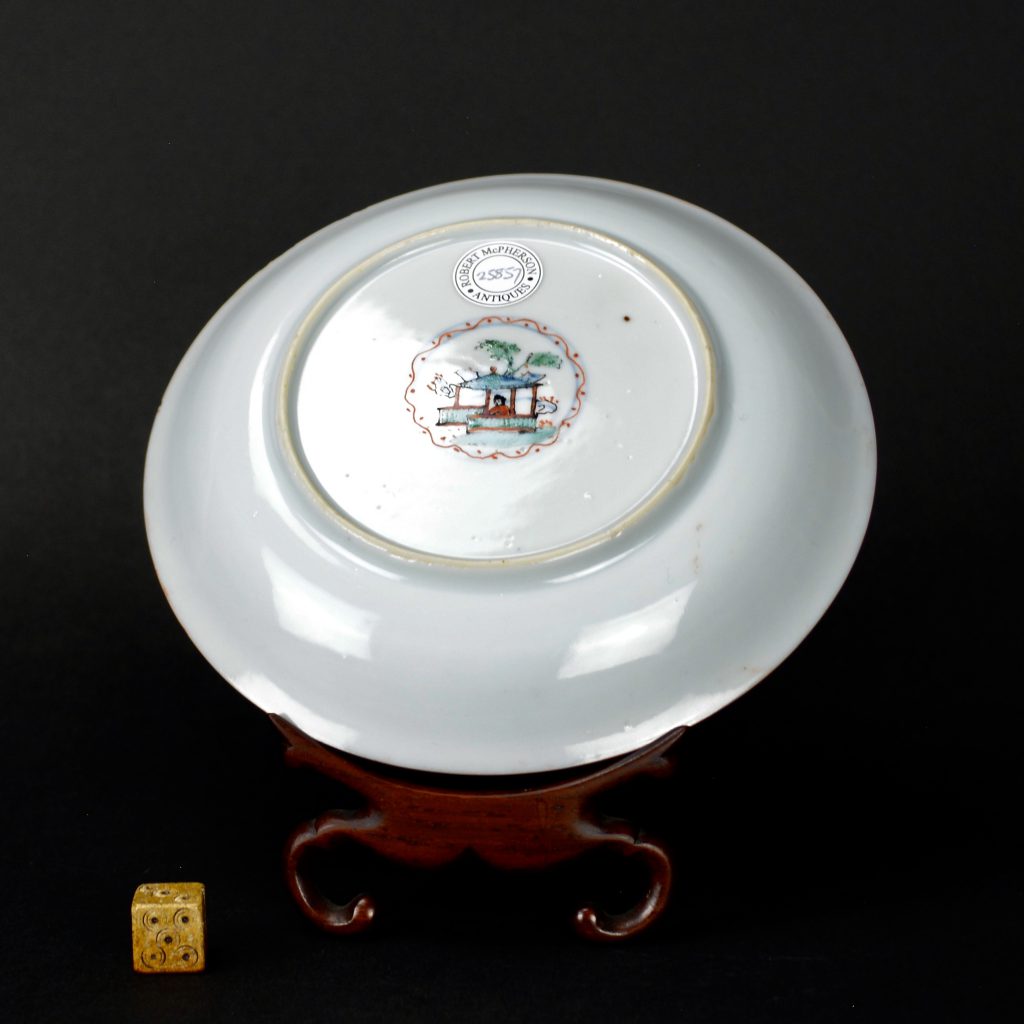 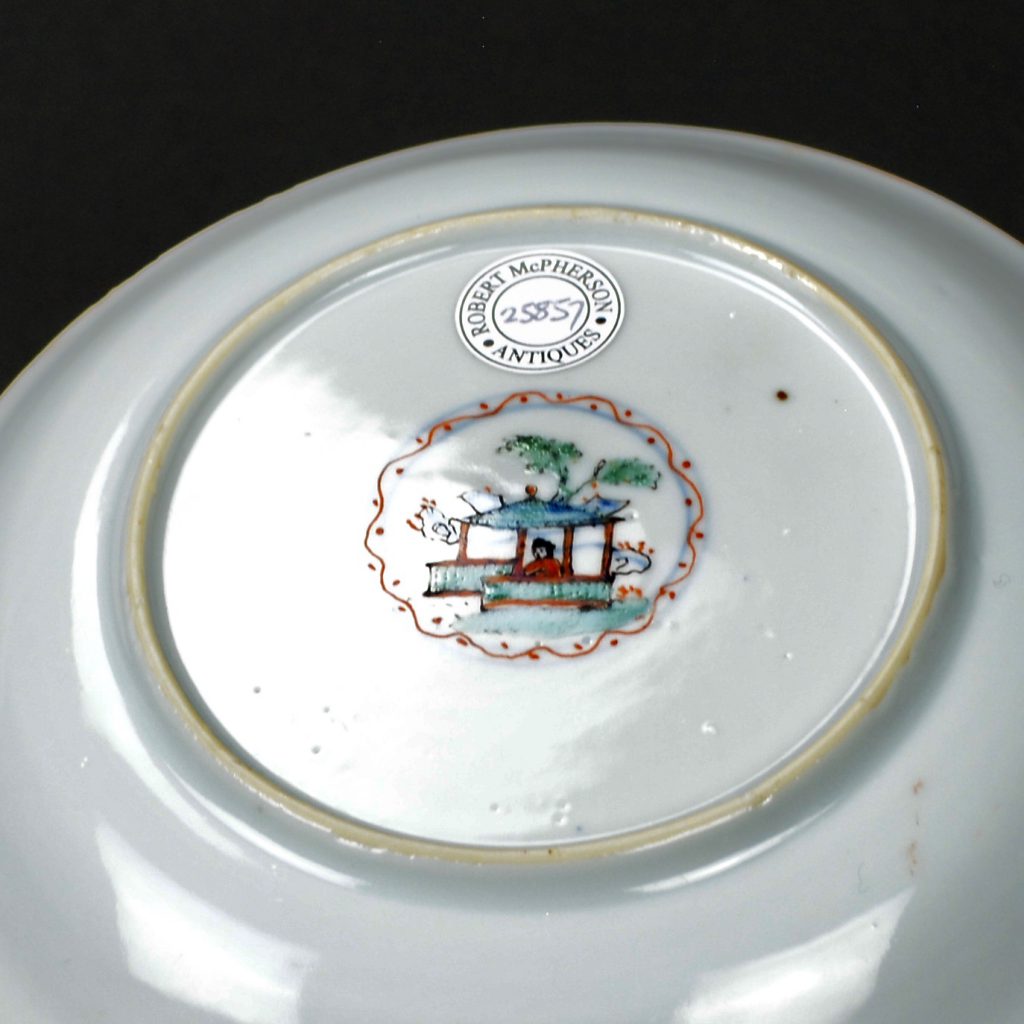 The five or so different sets of Chinese Export Porcelain Commedia dell'arte plates that were commissioned by the V.O.C. were made as propaganda. They helped counter the turmoil of the period, the Netherlands feared the financial crisis would threaten the wealth of the country and they needed to act. During the South Sea Bubble period of the around 1720, many popular prints, broadsheets and playing cards were produced lampooning man’s folly and worthlessness of shares. The Chinese plates that were commissioned to depict these disastrous times had to been produced as soon as it was possible. However, the journey to China as well as commissioning the designs and bringing them home obviously took time. This helps explain why there are also Dutch decorated Chinese porcelain examples, these could obviously have been made in a shorter time scale and were therefore ready for the market when the South Sea Bubble was very much current news. In the end the Netherlands escaped relatively well compared with Britain and France.

The South Sea Company was a British company founded in 1711. Officially it was called The Governor and Company of the merchants of Great Britain, trading to the South Seas and other parts of America, and for the encouragement of fishing. It was a public-private partnership aimed at consolidating and reducing national dept. The company was formed to trade in the South Seas and the West Indies but in reality, it was more of a financial management organisation than a real commercial venture. The company did not conduct real trade but depended instead on rising share prices to make a profit. When the company was founded, Britain was involved in The War of Spanish Succession. So, there was no real prospect of trade because Spain and Portugal controlled most of South America and therefore the South Seas. It was the dramatic rise in shares with its operations dealing with government debt that caused a sensation. The prices peaked in 1720 before suddenly collapsing to a fraction above its initial floatation value. This sudden collapse in the share price of 1720 led to panic, not just in Britain but in the Netherlands and beyond. It ruined thousands of investors and became known as the South Sea Bubble.

The theatrical entertainment of the Commedia dell'arte was at the height of its popularity during the financial scandals of the period 1718 to 1722. So, it is not surprising the chaotic escapades of the Commedia dell'arte were a perfect metaphor for the financial world turned on its head. England had the South Sea Bubble but in France upheaval was bought about by John Law's Louisiana, Mississippi and Eastern Companies.