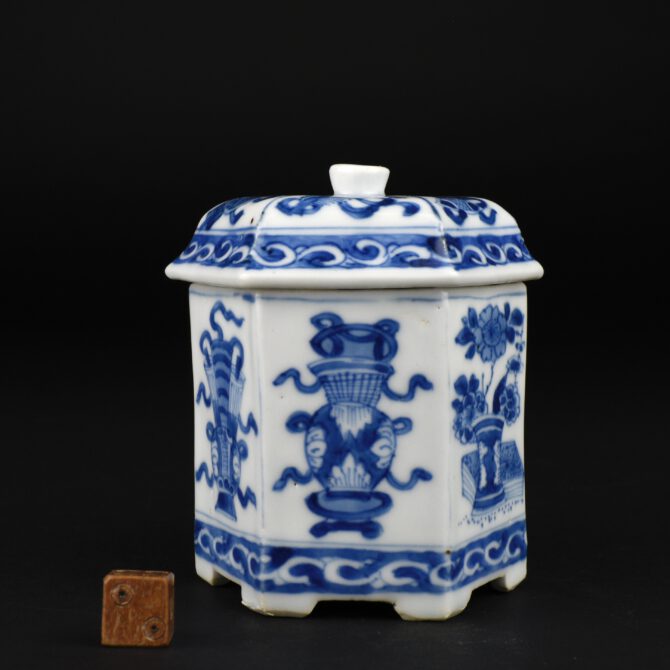 A Rare Kangxi Porcelain Jar and Cover, Late Kangxi c.1690-1710. This hexagonal Blue and White porcelain from the Morpurgo Family container is perhaps a spice box or a maybe a container for sugar. The box is decorated in a version of the ‘Hundred Antiques’ design, these include vases of flowers, books, scrolls etc, the cover incorporates some of the ‘Eight Precious Objects’ (see below for more details about the Eight precious Objects). This small Kangxi object sits on six shaped feet. Although undoubtedly made for use, such items were often incorporated into large Baroque displays in large houses and castles during what became known as ‘China Mania’. For more details about the The Morpurgo Family Collection see ‘Provenance’.

Condition
In extremely good condition. A couple of minute frits c.1mm.
Size
Height 9 cm (3 1/2 inches)
Provenance
The Morpurgo Family Collection - This collection was formed thanks to four successive generations of the Amsterdam Morpurgo family. The first, Joseph Morpurgo, started with no experience of the world of antiques and collecting. Thereafter, each generation sought to improve the breadth of their expertise and also the quality of the works they were acquiring. The collection reflects Dutch taste of the late 19th and 20th century, it was not just a collection of oriental ceramics. It included Dutch Delftware, silver and glass.
Stock number
25715 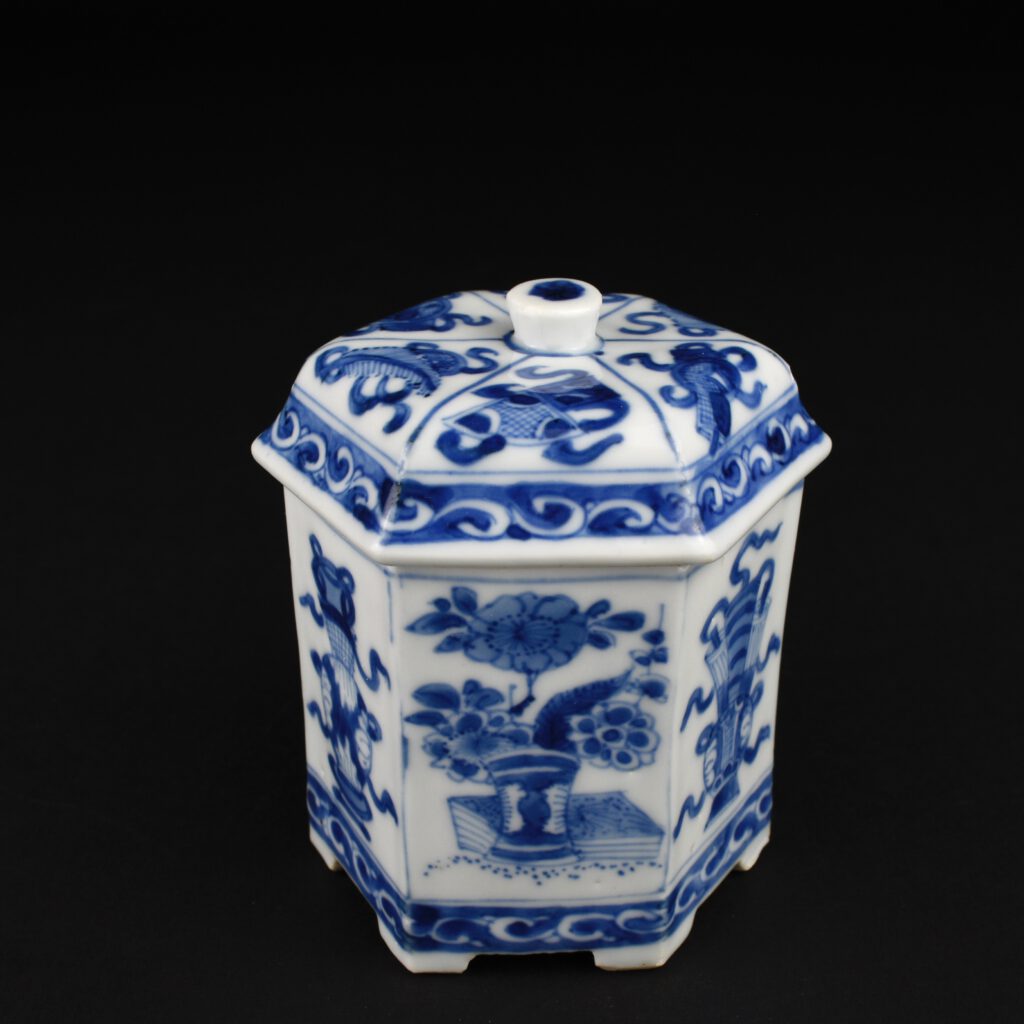 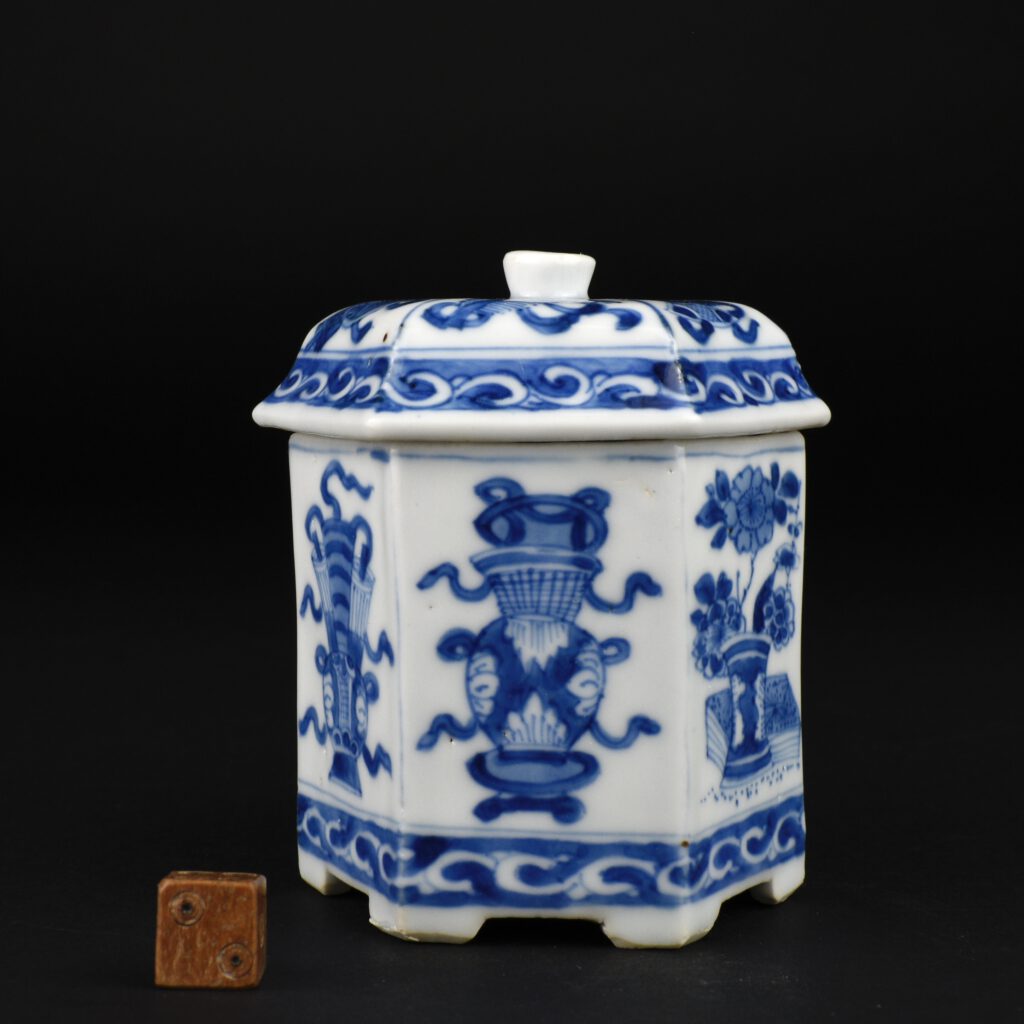 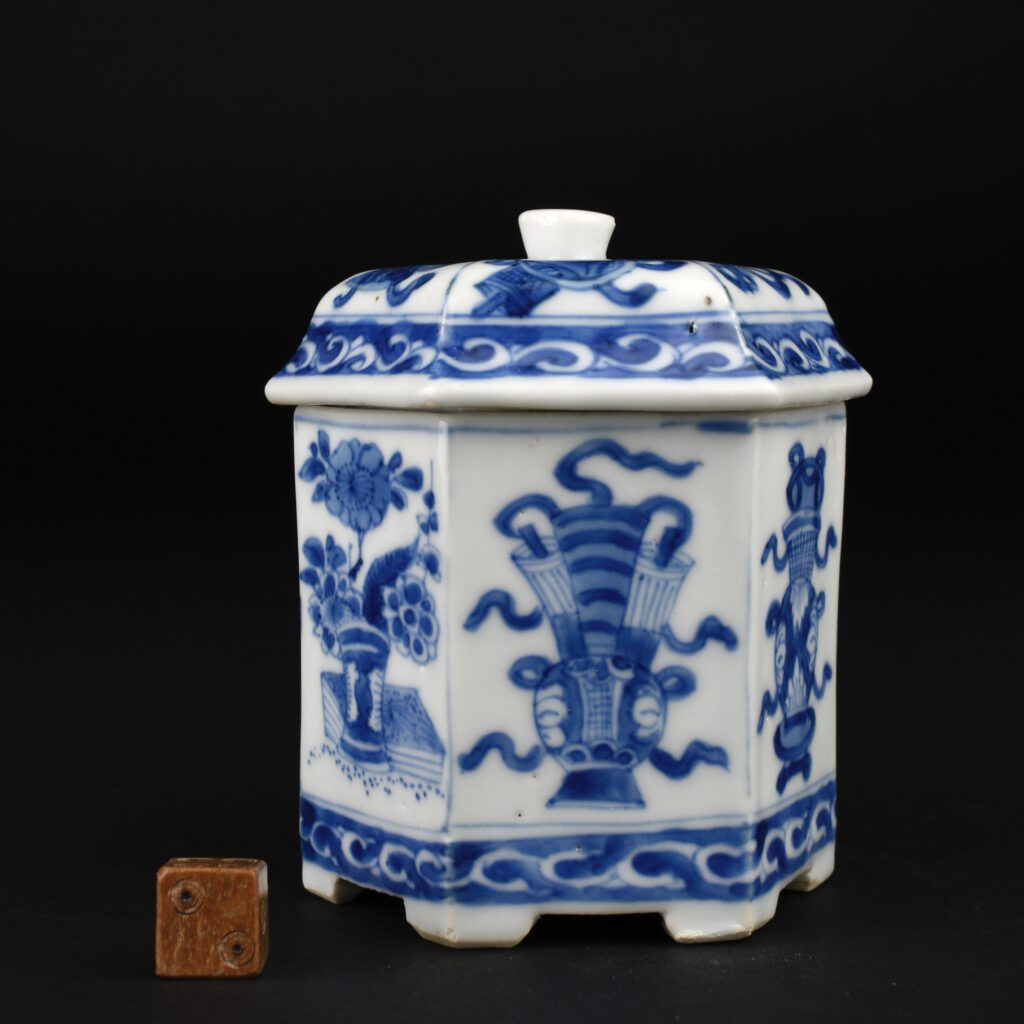 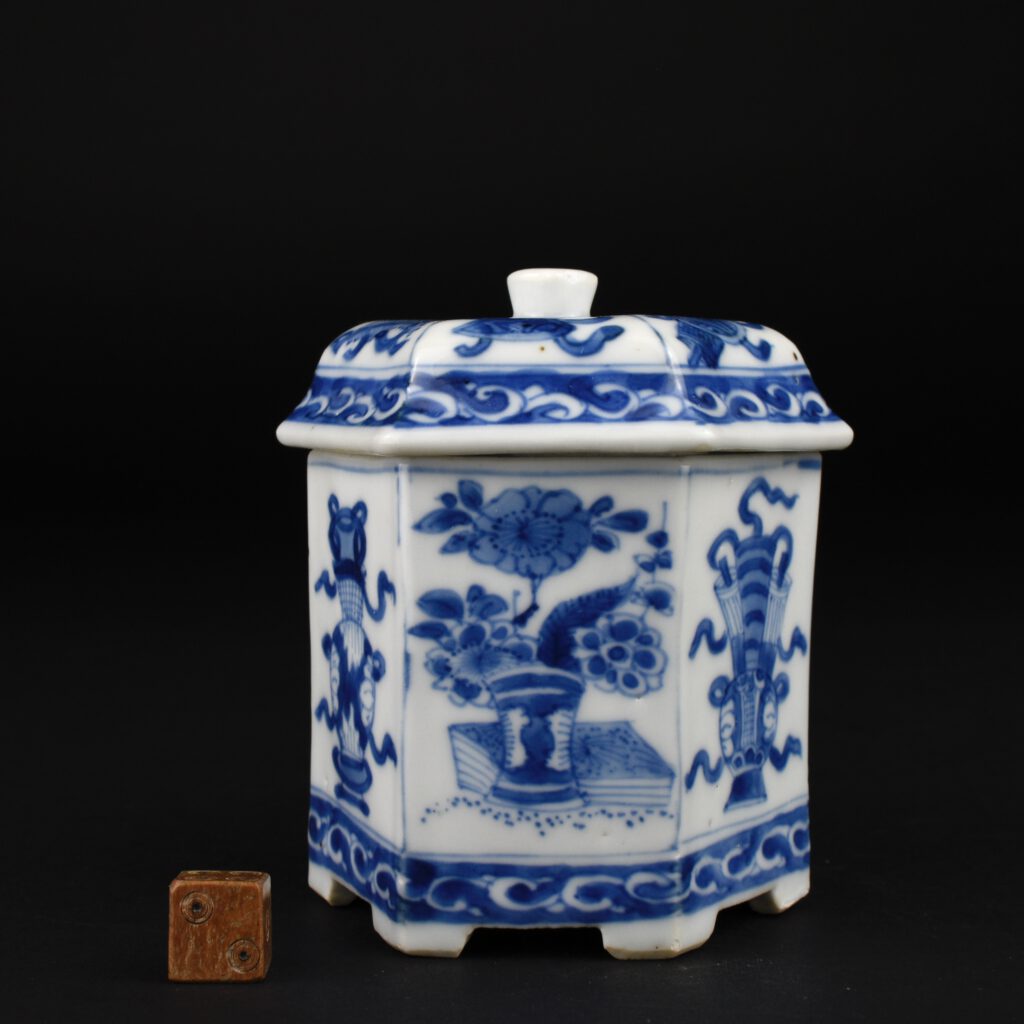 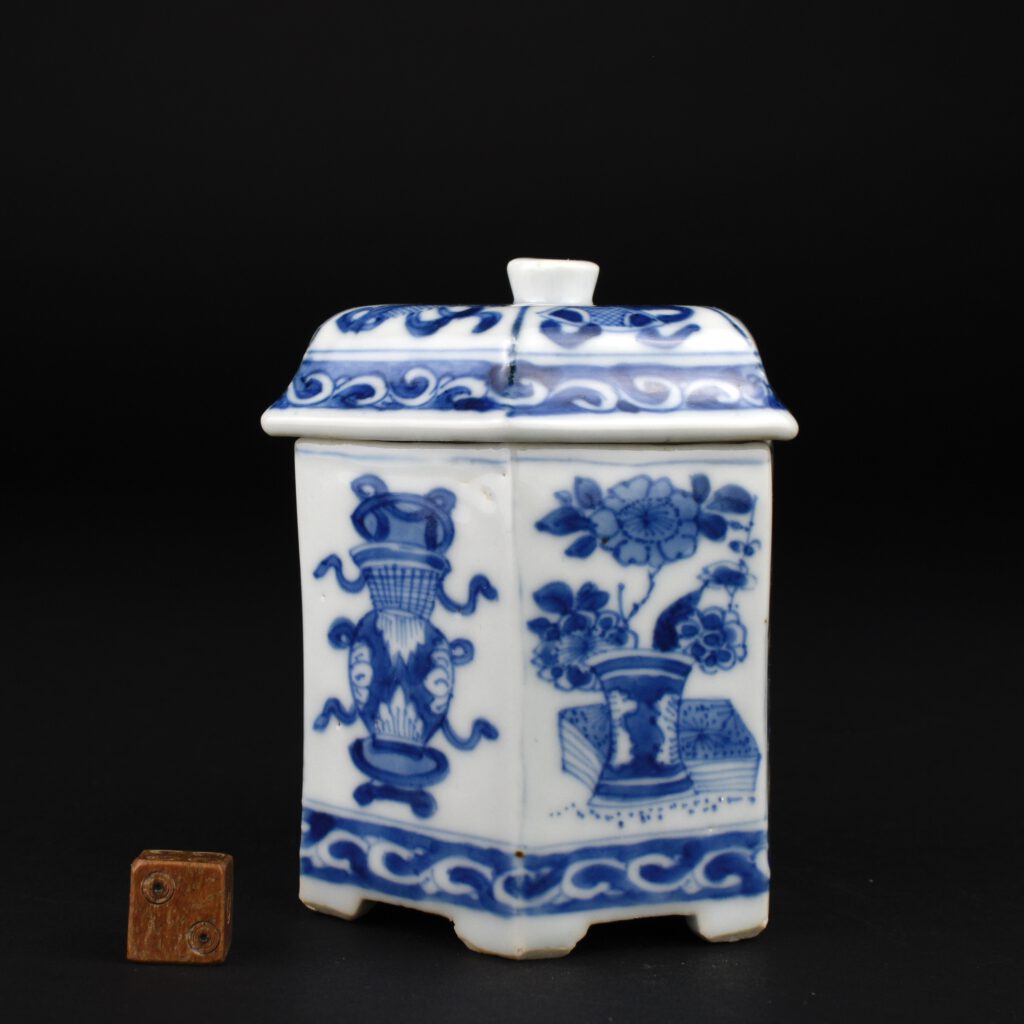 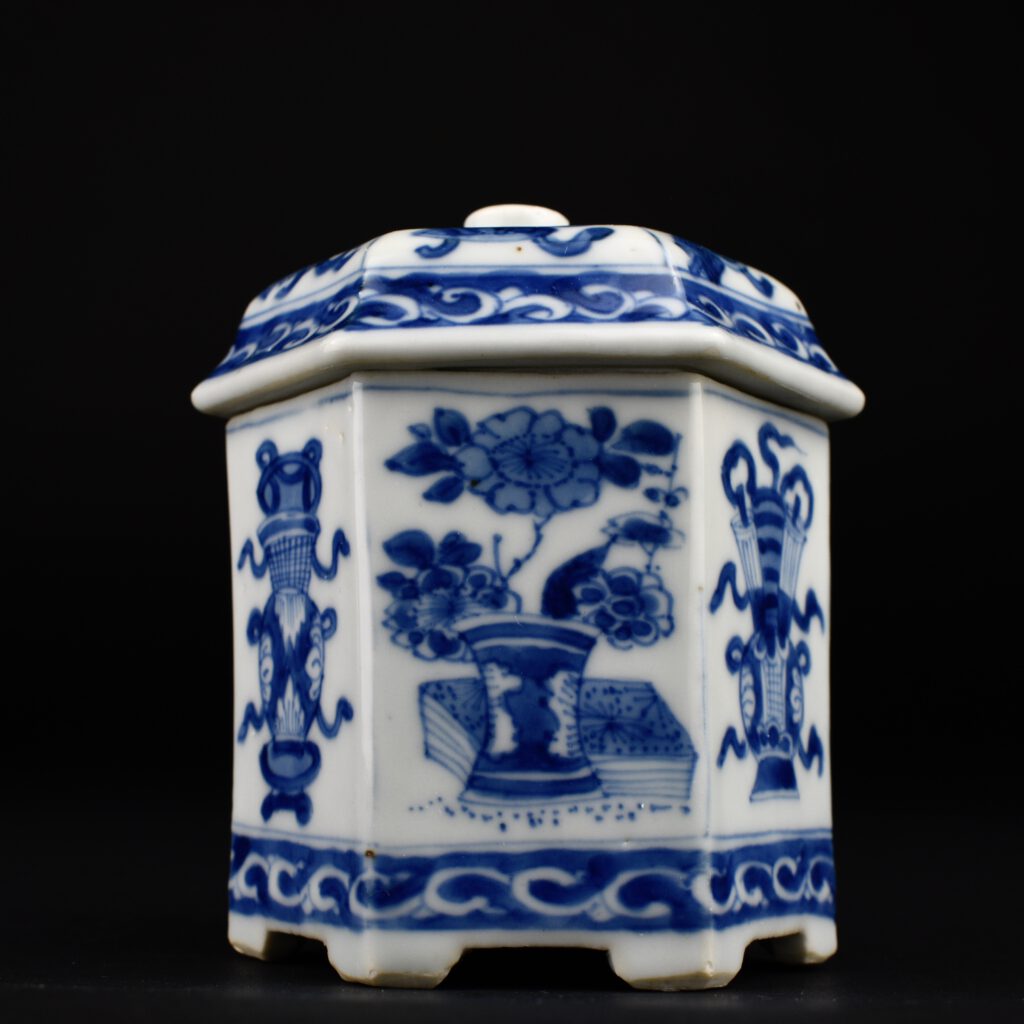 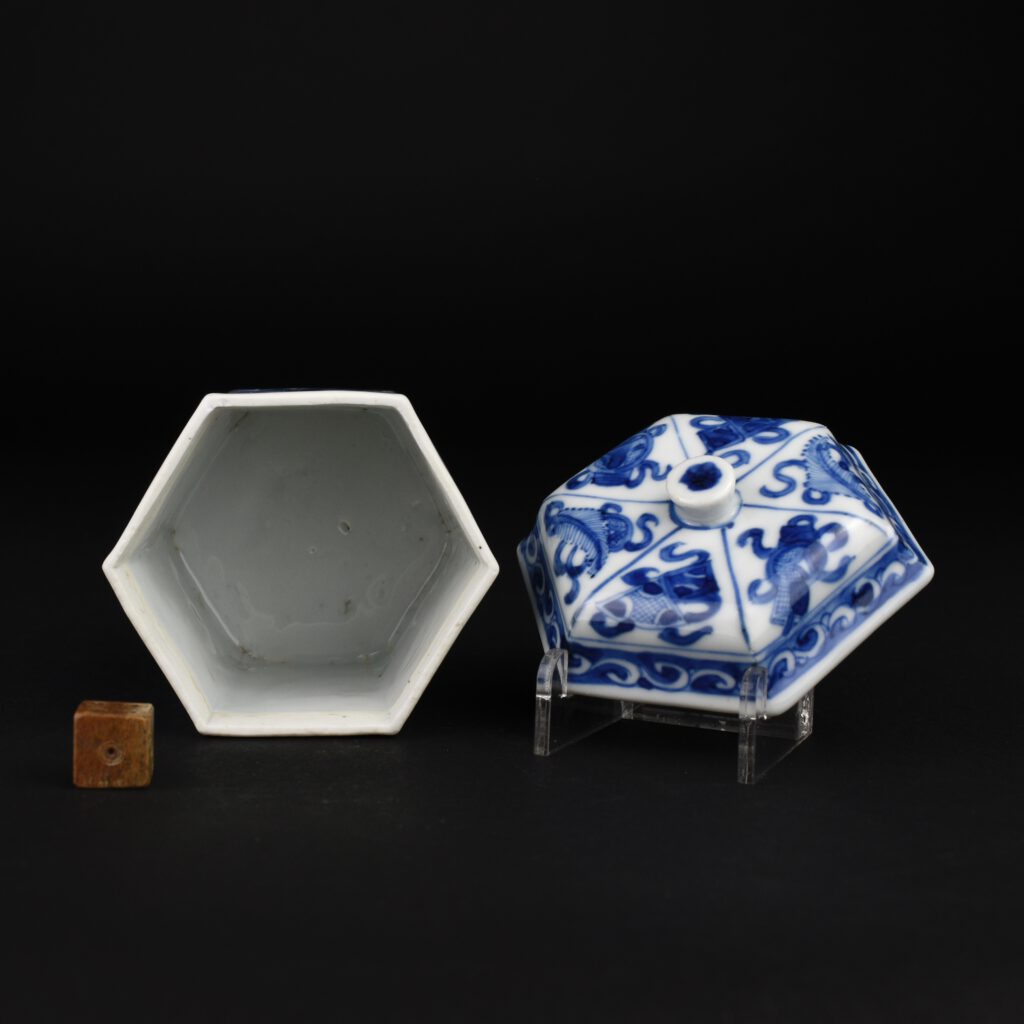 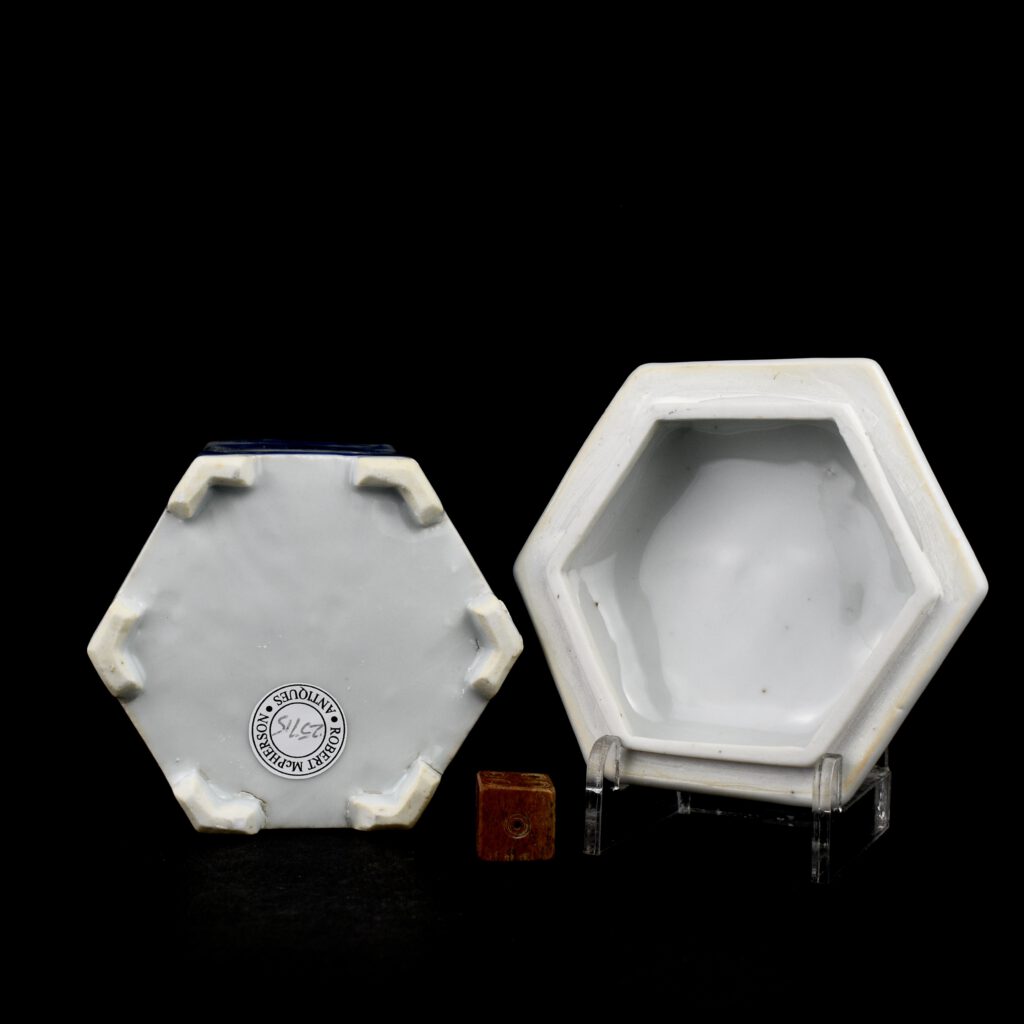 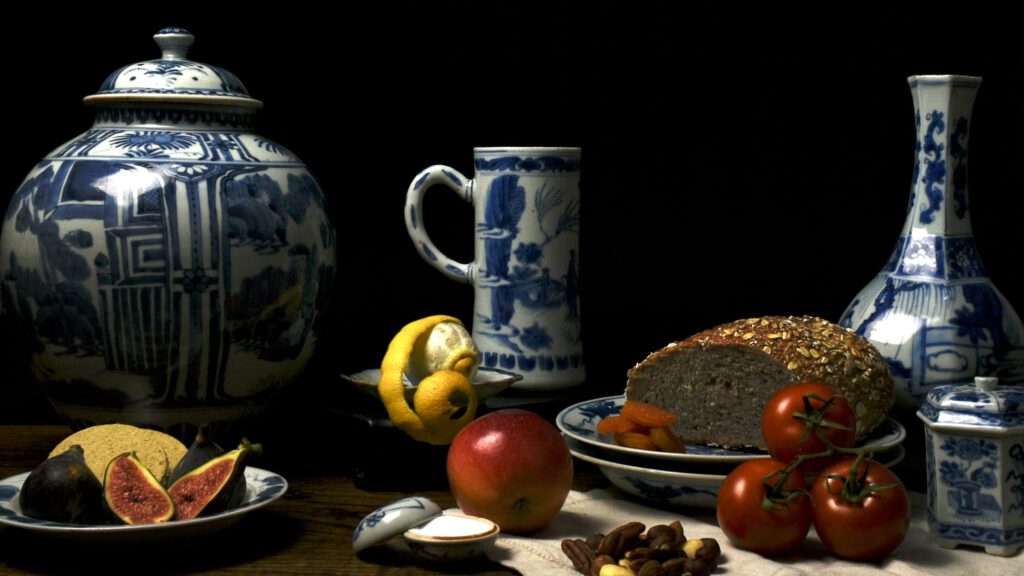 Baroque Displays / China Mania :
Objects Such as the Present Examples were Ordered in Large Quantities By the Dutch East India Company (V.O.C.) at the End of the Seventeenth Century. They were often used as Part of Fashionable Baroque Decorative Schemes, Displayed on Gilded Brackets and on little Ledges, in fact on any and every Available Surface. The Desired Effect was to Show the Pieces on Mass as part of a Grand Room Setting, Arranged so as to Overwhelm the Spectator. This Fashion, Sometimes Referred to as `China Mania` was Bought from Holland to England by Mary II (Reigned 1689 -1694). Her Rooms at Kensington Palace (5 Minutes Walk from our Shop) were Decorated in this Fashion. Daneil Defoe (1660-1731) Stated that "The Queen (Mary) bought in the custom or humour, as I may call it, of furnishing houses with China-Ware, which increased to a strange degree afterwards, piling their China upon the tops of cabinets, scrutores, and every chymney-piece, to the top of the ceilings, and every setting up of shelves for their China-Ware, where they wanted such places, till it became a grievance in the experience of it, and even injurious to their families and estates". Even allowing for Artistic Licence this give an Idea of the Extent of the Fashion. This Obsession with Chinese and Japanese Porcelain Varied Slightly from Country to Country, the Type of Porcelain Varied, for Example French Inventories are Almost Exclusively of Blue and White, where as Queen Mary`s Included Many Pieces of Kakiemon and Imari. The way the Pieces were Displayed also Varied. The Formal Display of Porcelain may have derived from the Italian method of organising Collections or the German Kunstkammer. The Kustkammer was a Very Mixed Display, which would put Exotic Shells next to an Animal Scull next to a Piece of Chinese Porcelain. What Ever it`s Origins earlier in the Seventeenth Century it has traditionally been accredited to the Huguent Daneil Marot (1661-1752). The French Man was well Versed in the Court Taste of Louis XIV, he Took these new Ideas to Stadholder William of Holland, Later to Become William III of England, Husband of Queen Mary II.