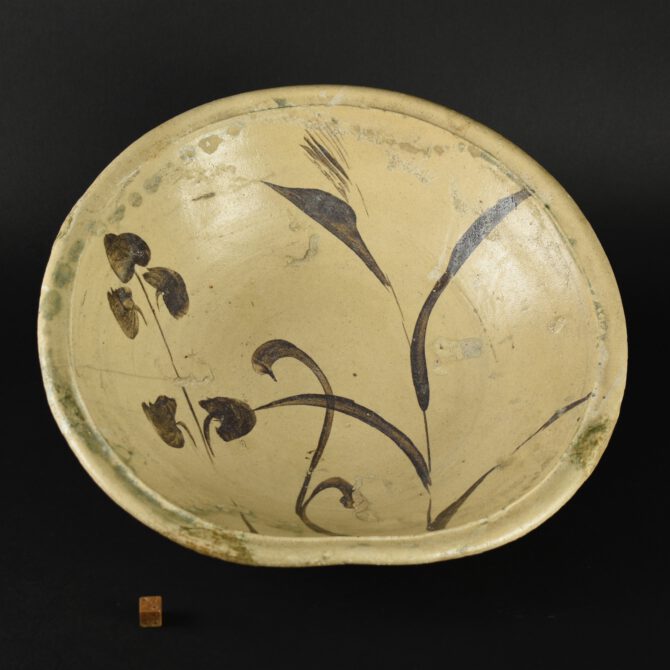 A Rare Massive 17th Century Oribe Pottery Bowl, Kasahara Prefecture, Japan c.1650 – 1700. The bowl is misshapen, rough and earthy, it is also very heavy. This Oribe pottery bowl is a utilitarian country product, in the Wabi-Sabi taste, simply decorated at great speed with a large reed, its seed-head indicated by just a few vertical lines. There are two other plants, to the left rounded leaves detached from the main stem, save the top leaf. The painting takes form through calligraphic strokes, the brush passing fast over the surface, pressed down to one side or another to indicate width, in places it misses the surface entirely. There are uneven green dots around part of the rim. 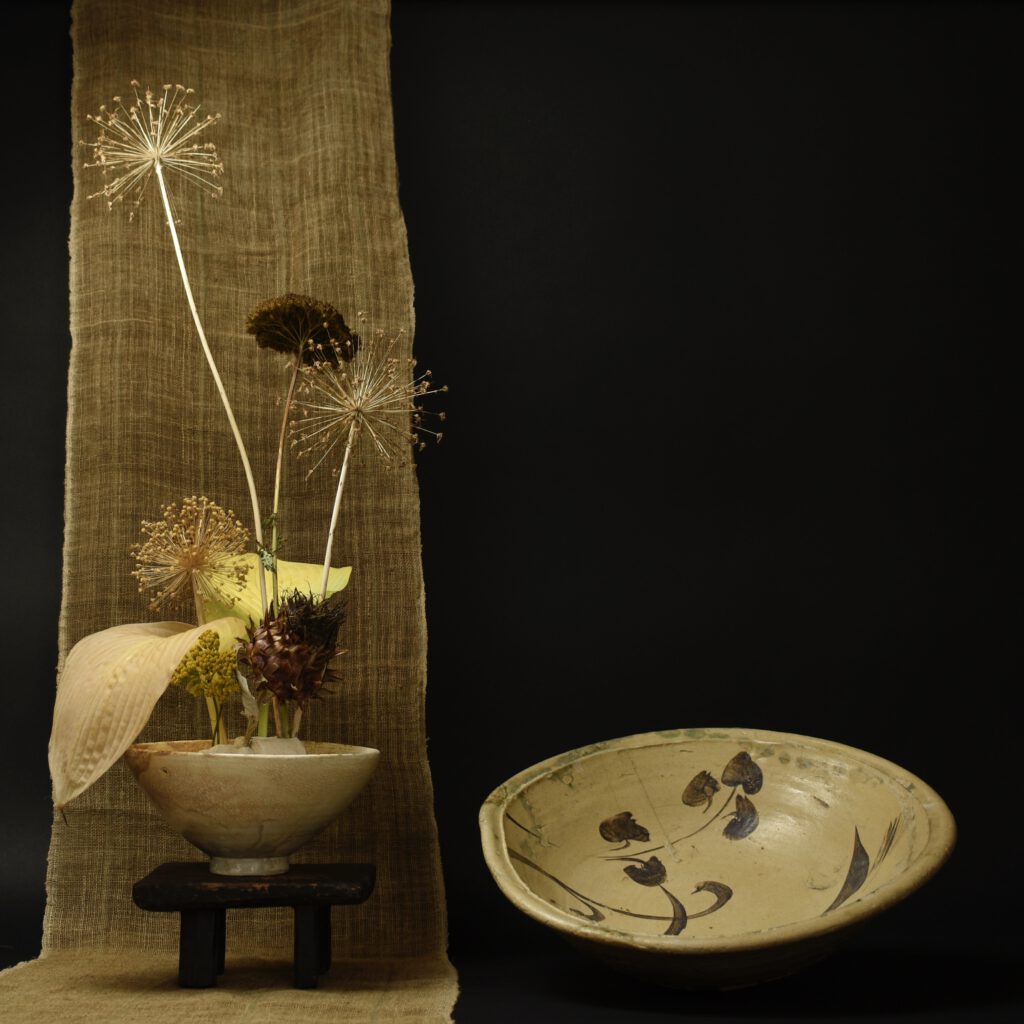 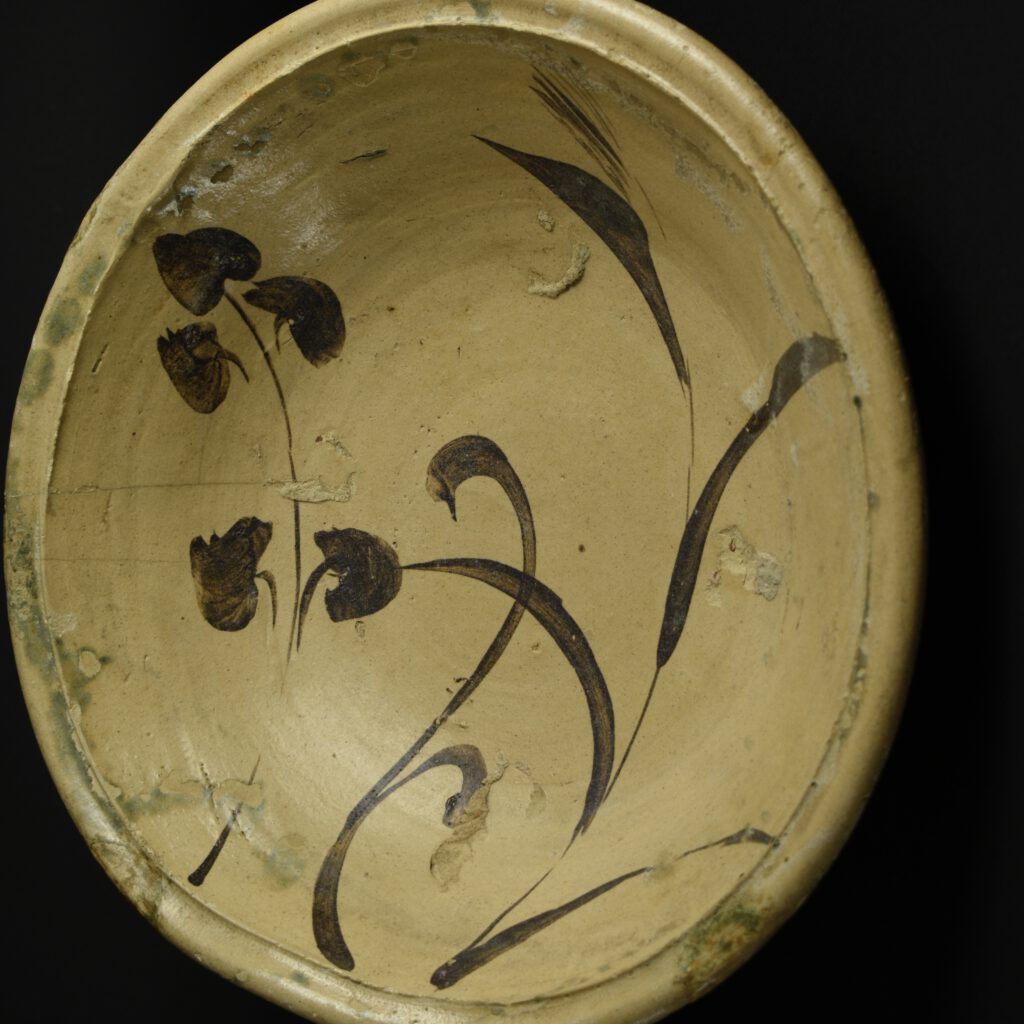 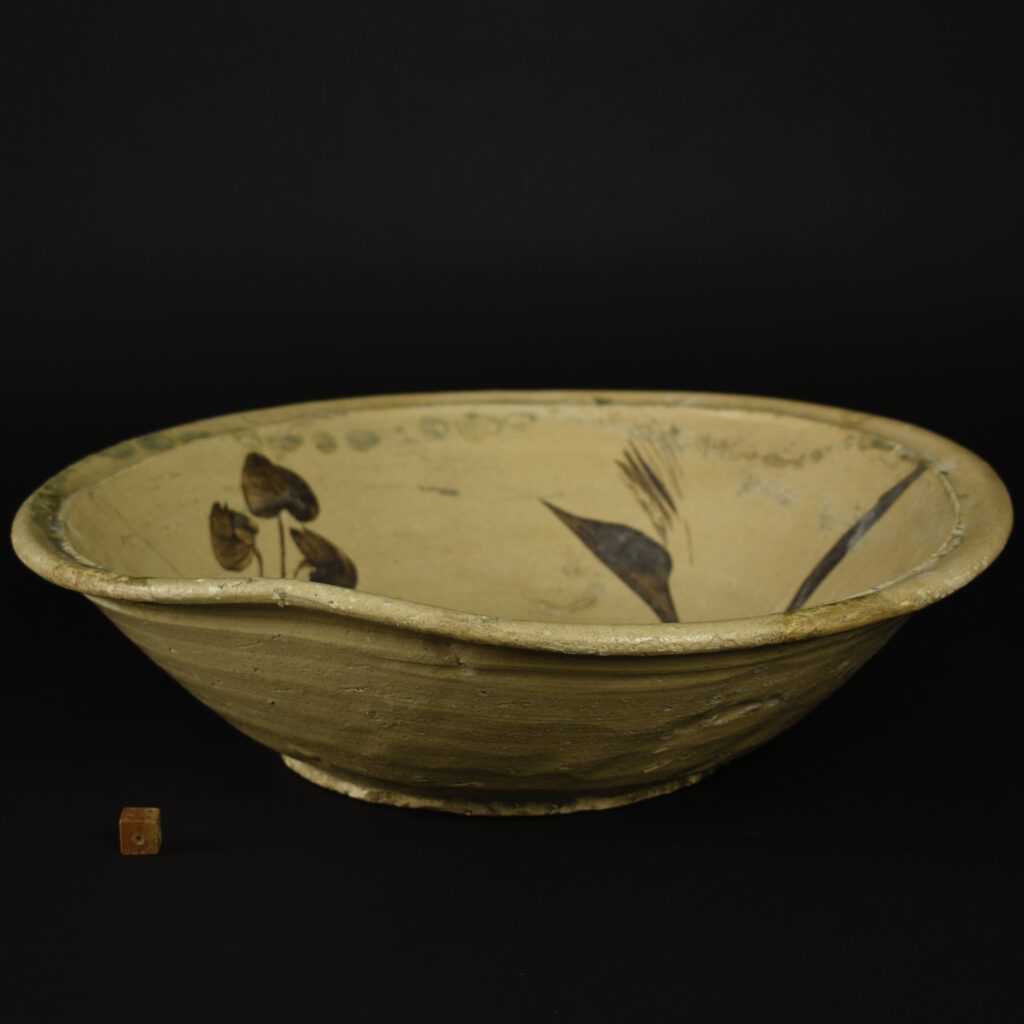 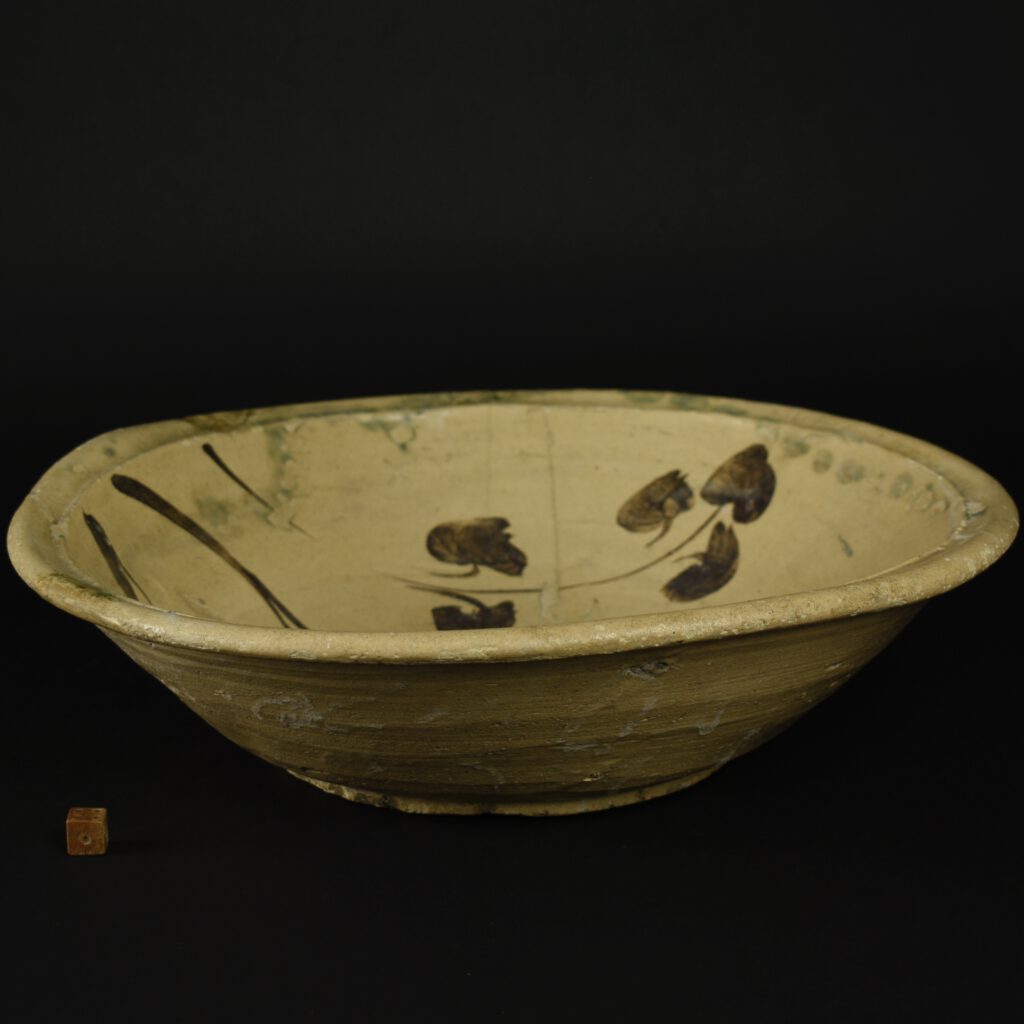 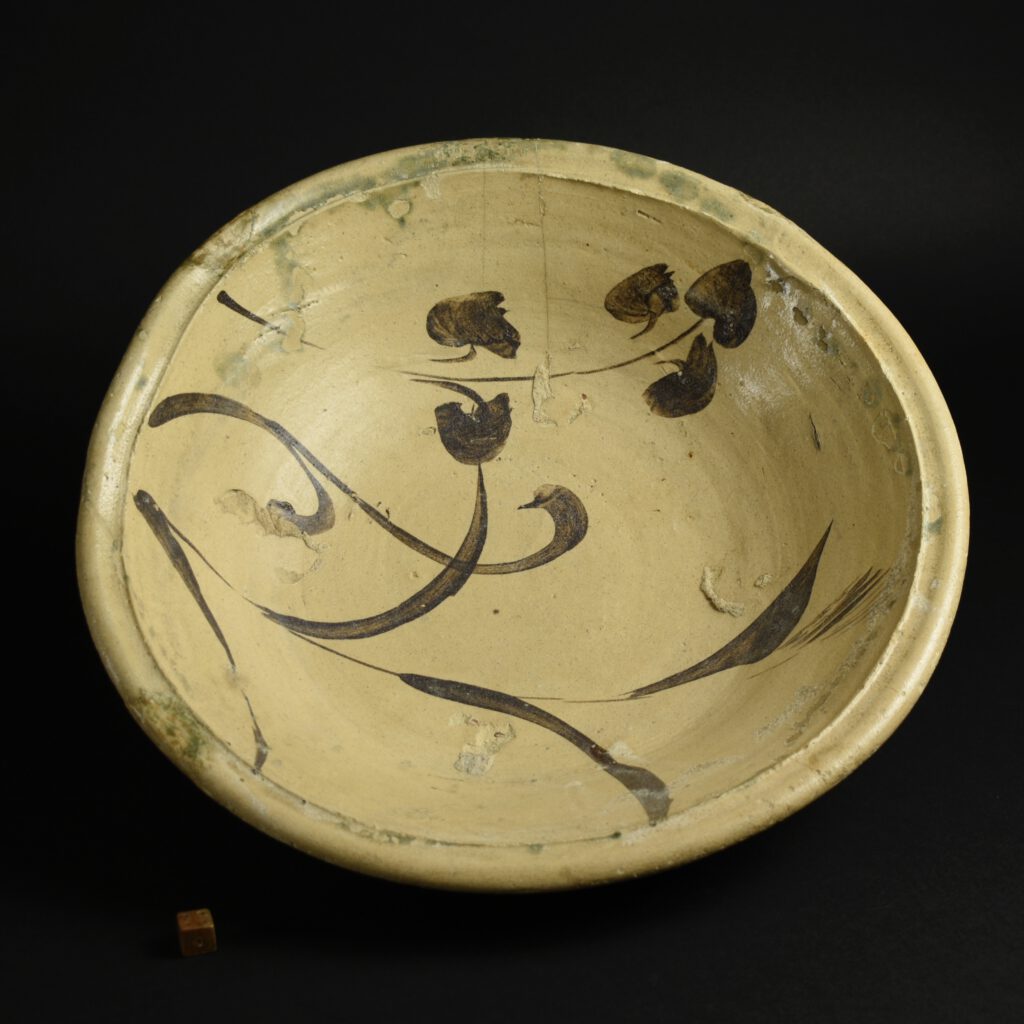 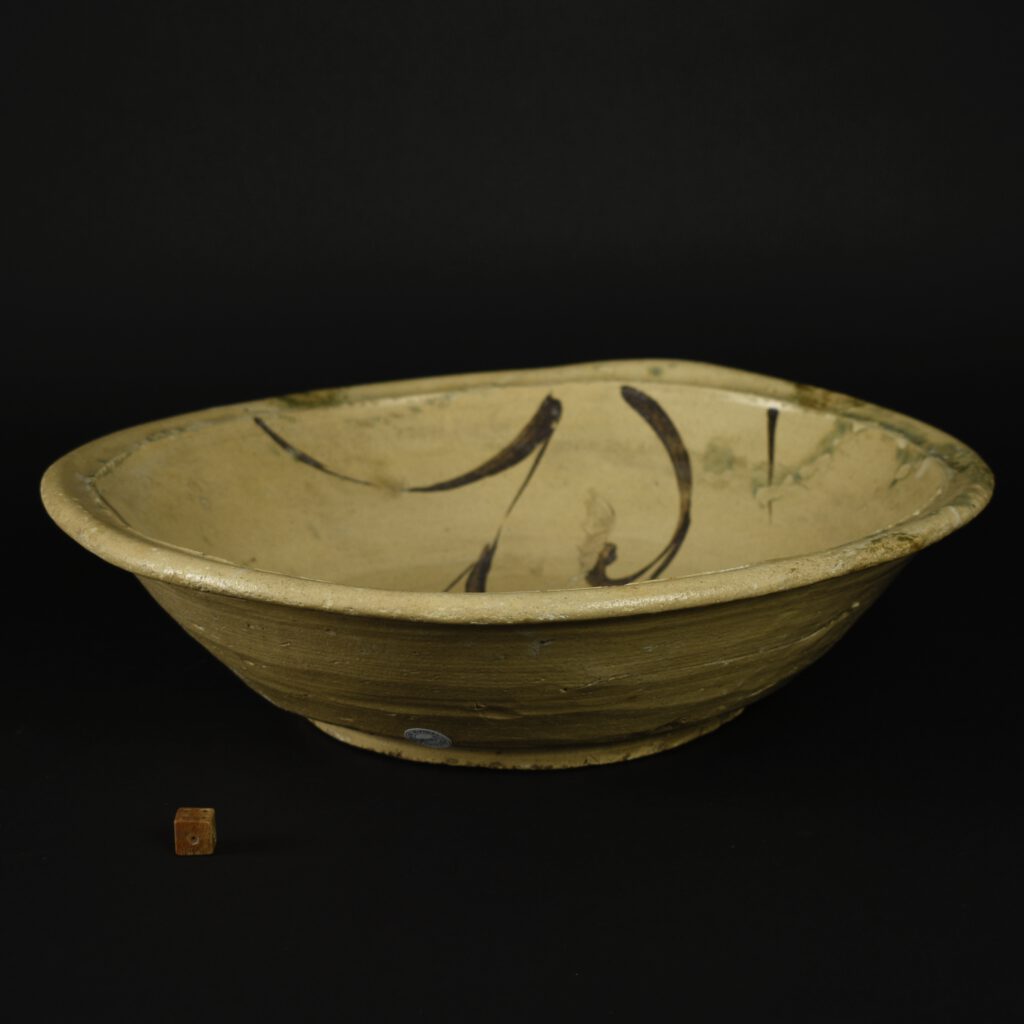 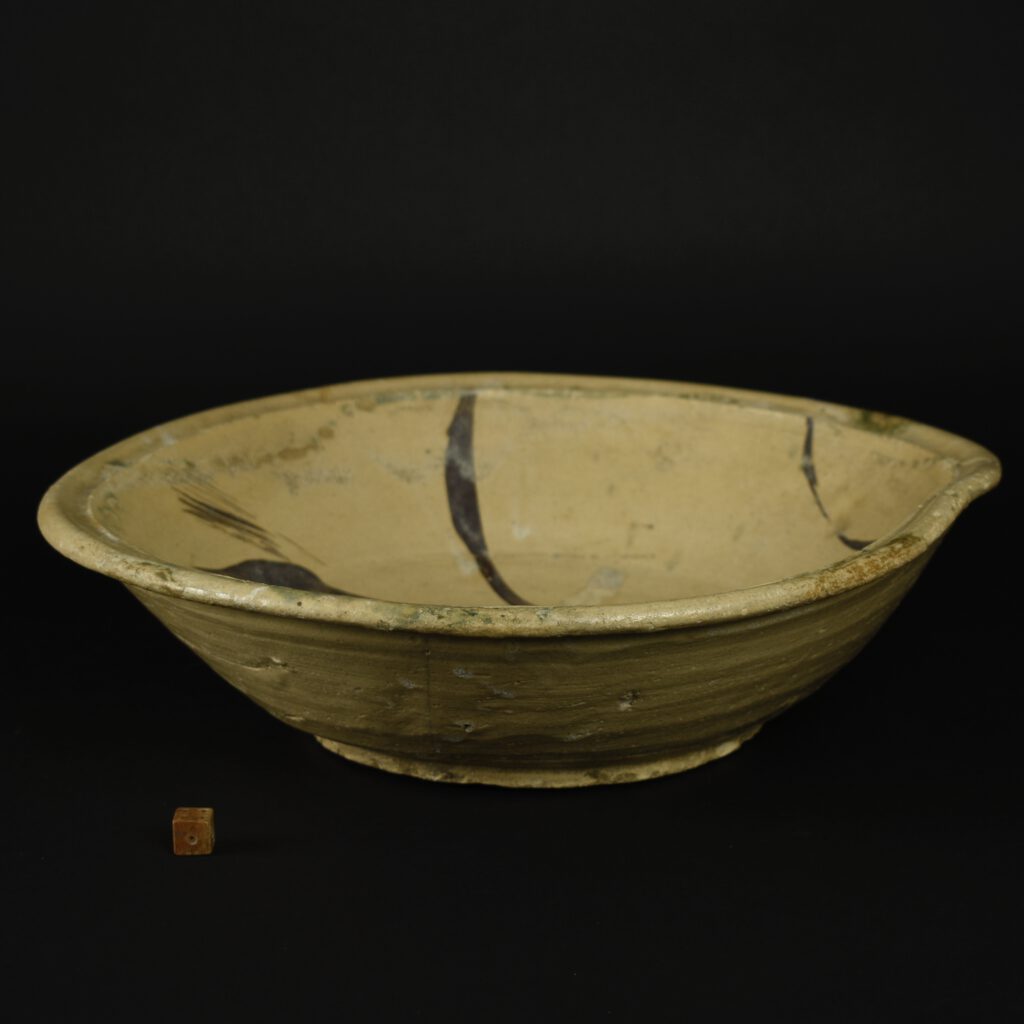 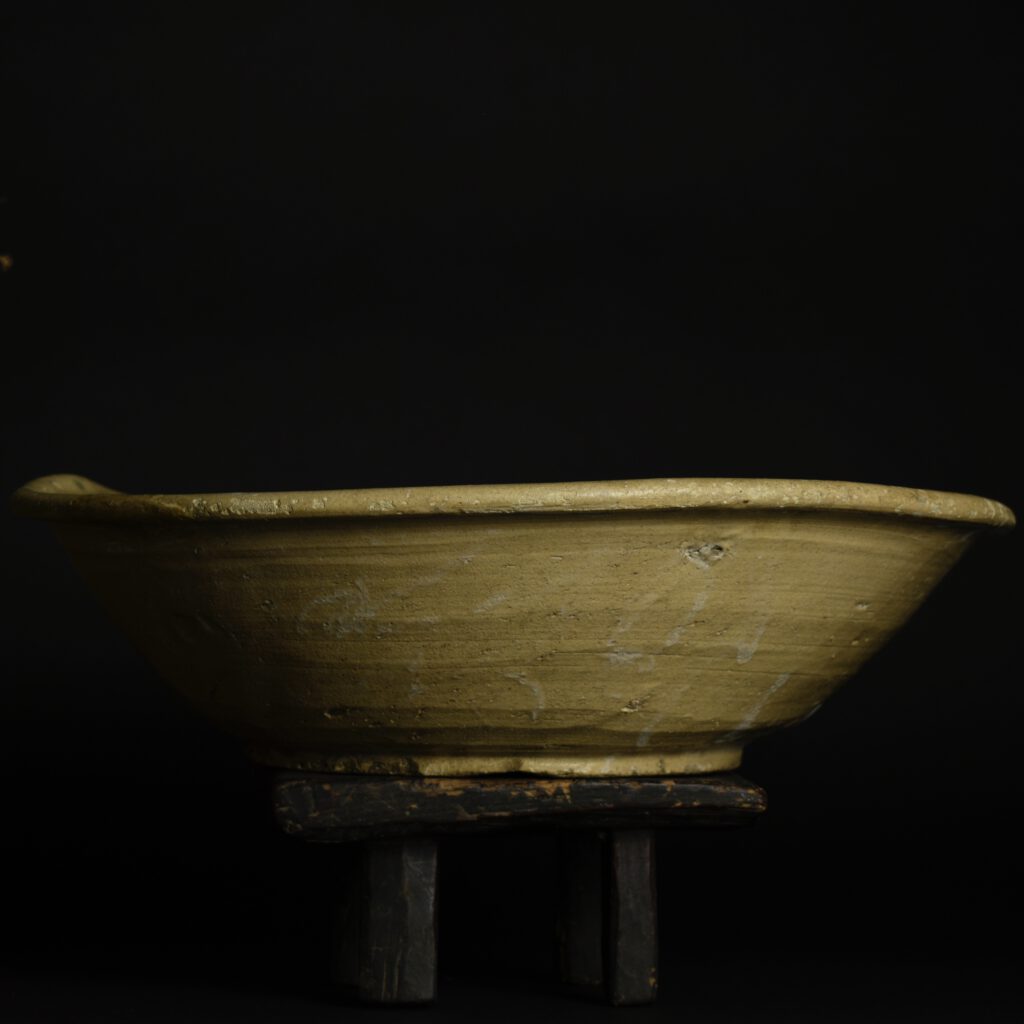 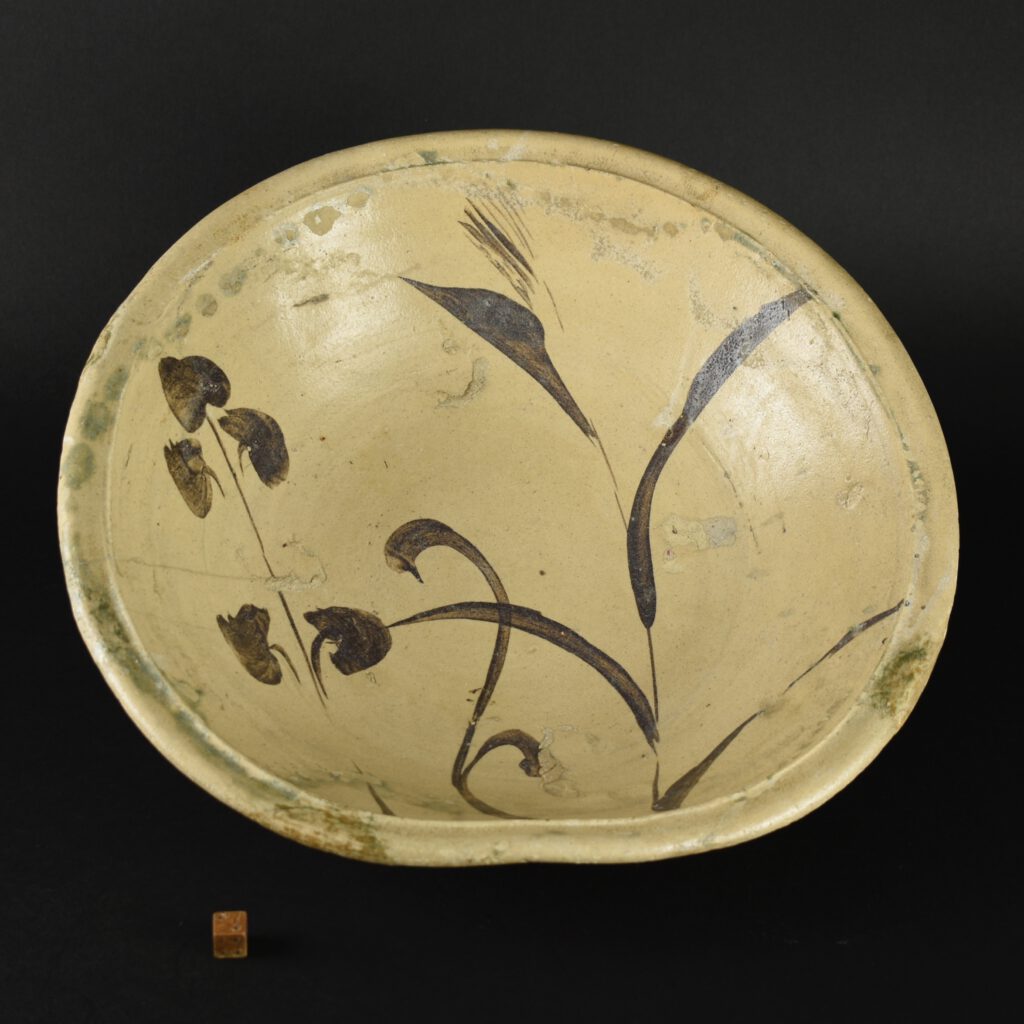 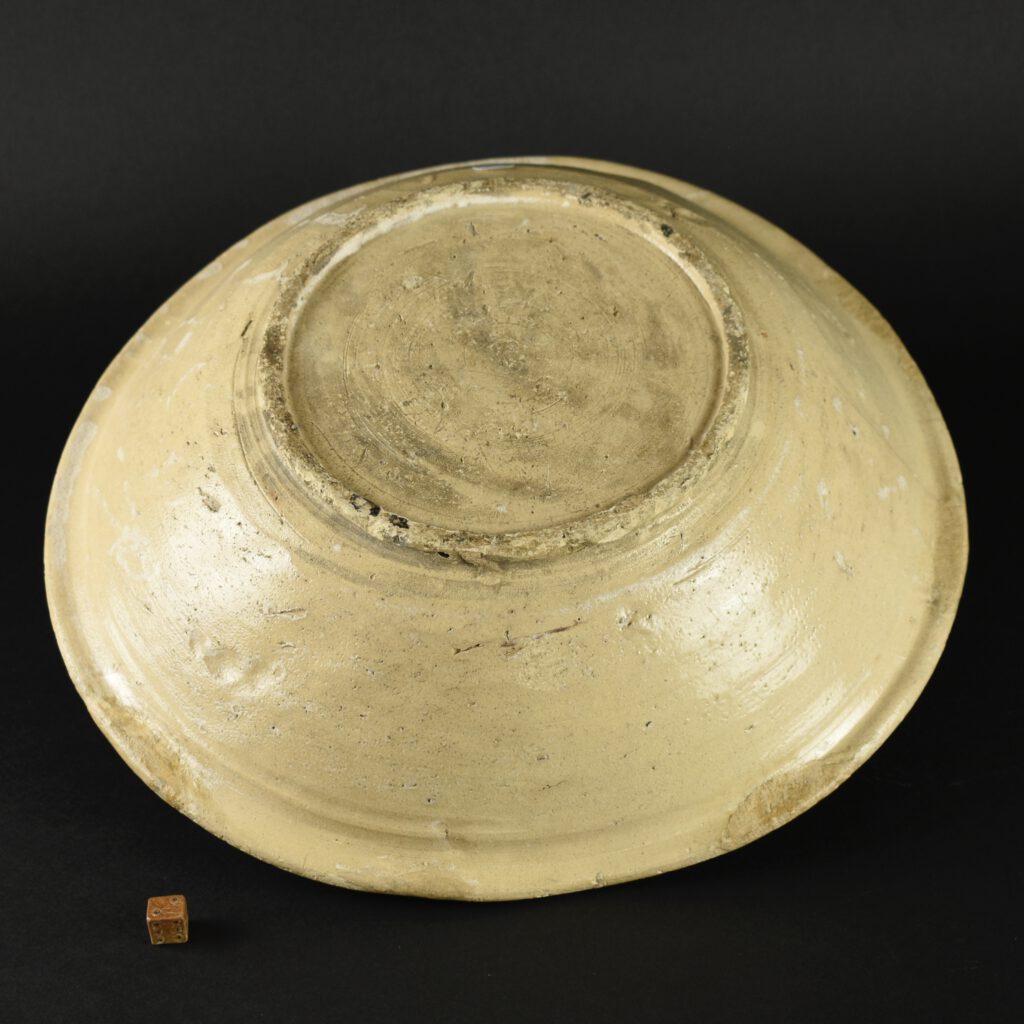 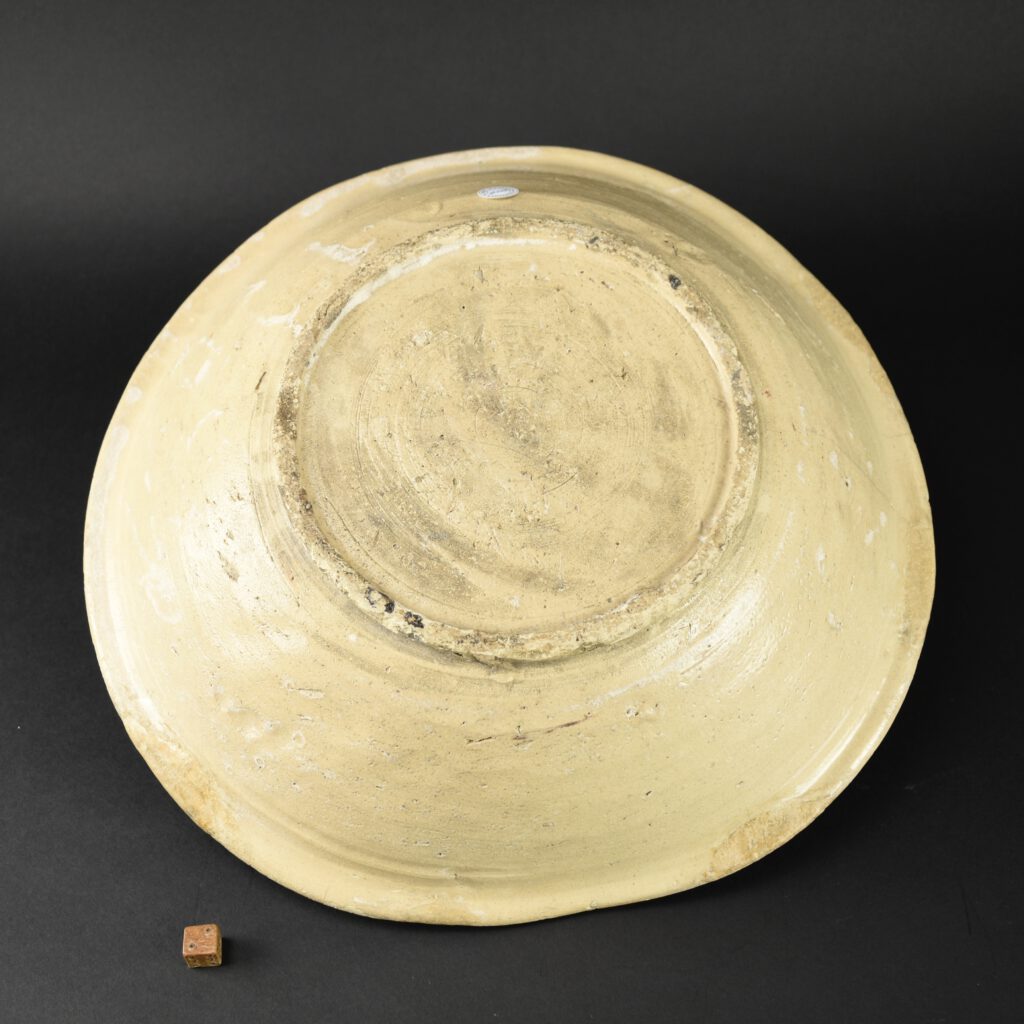 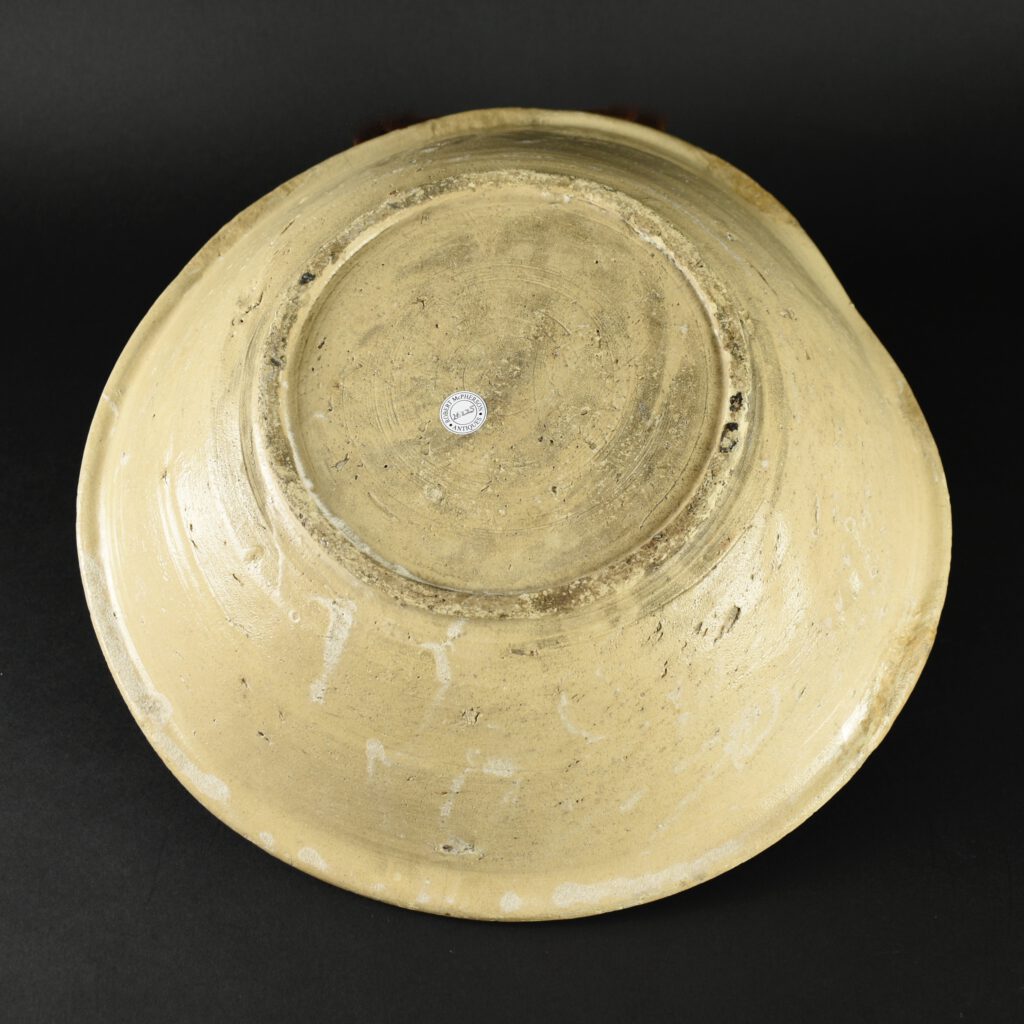 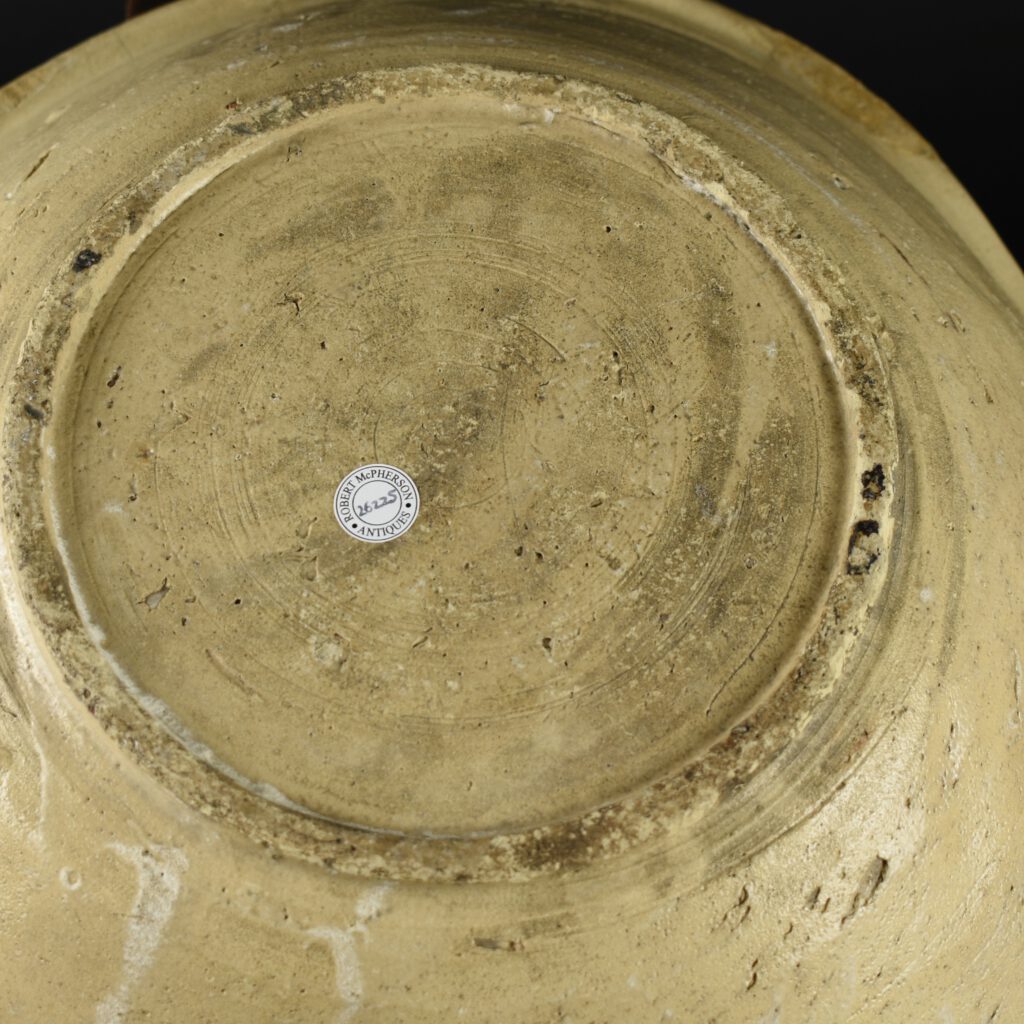 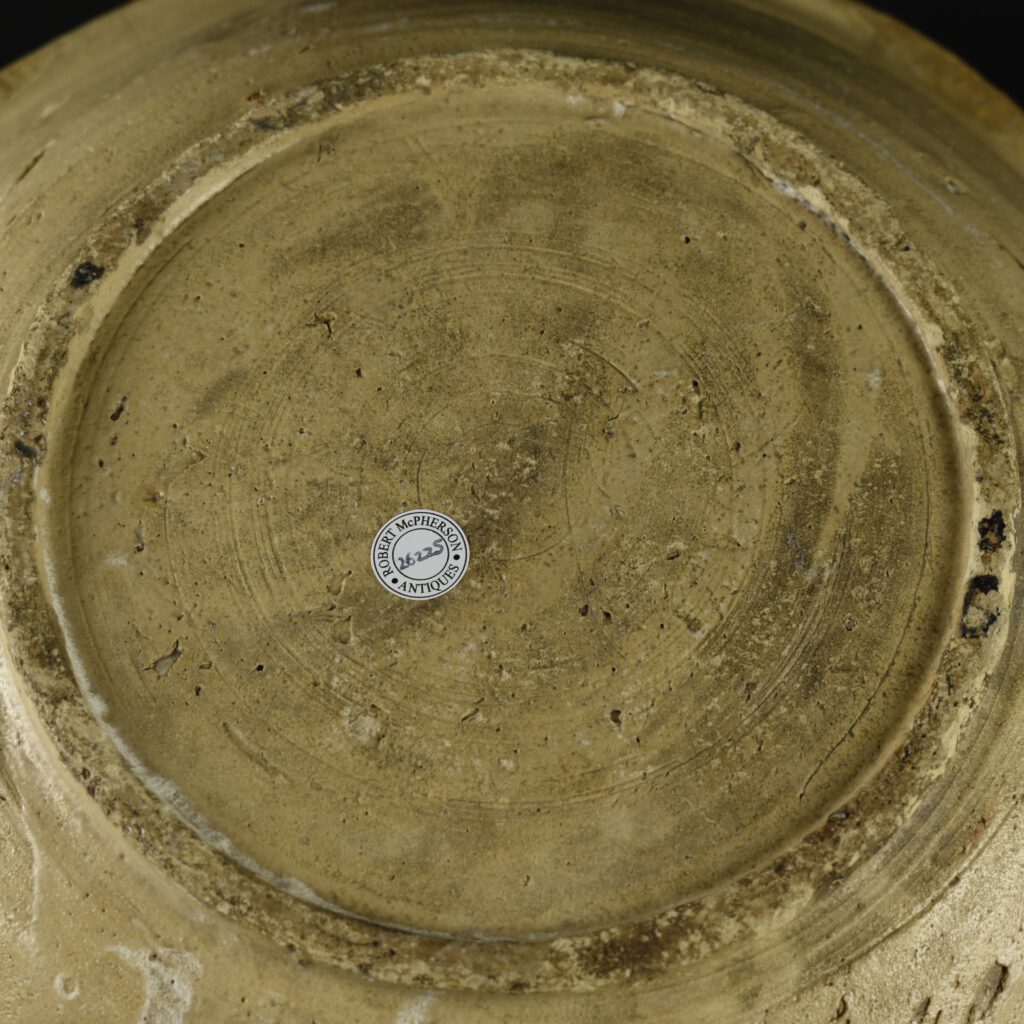 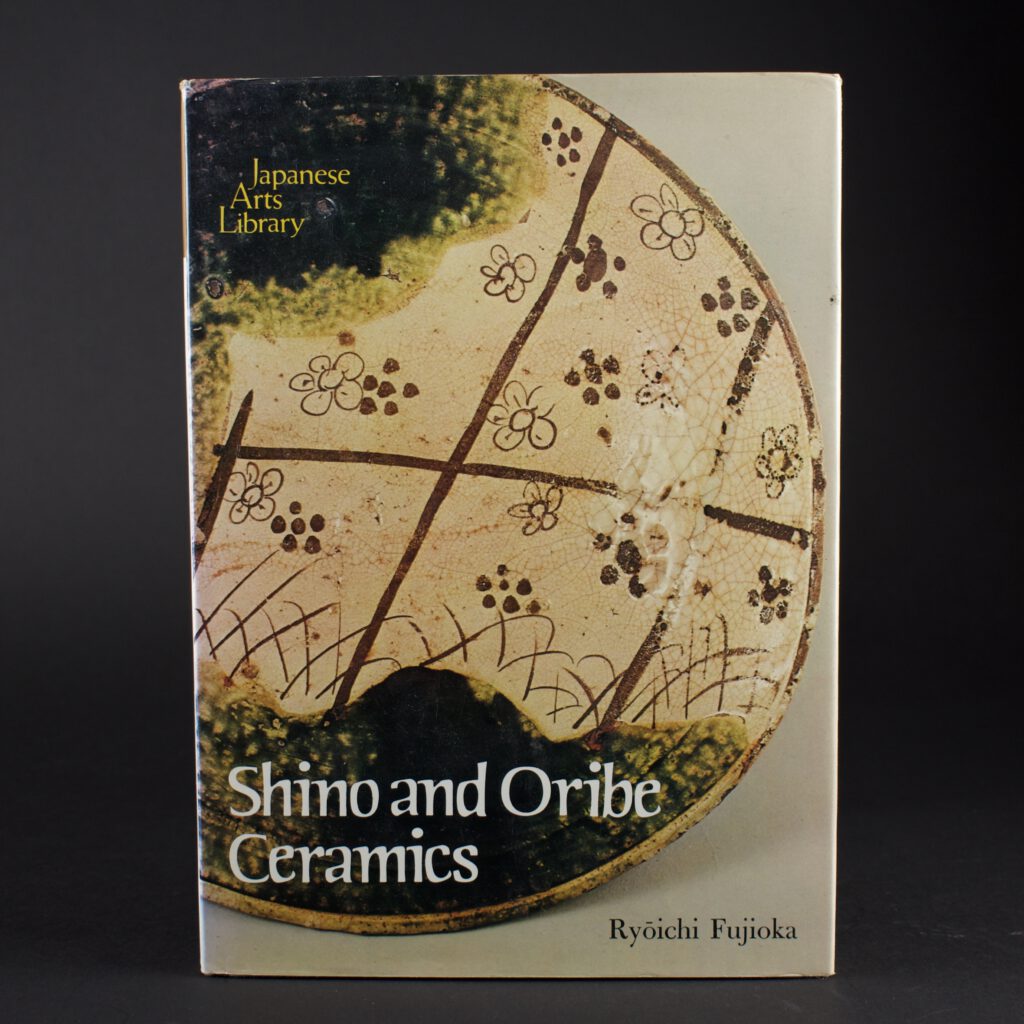 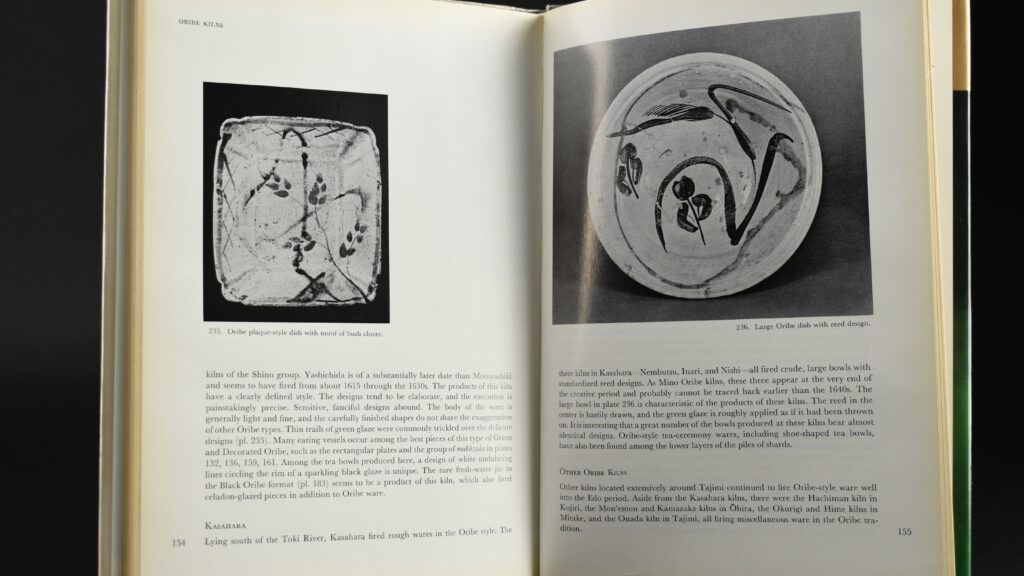 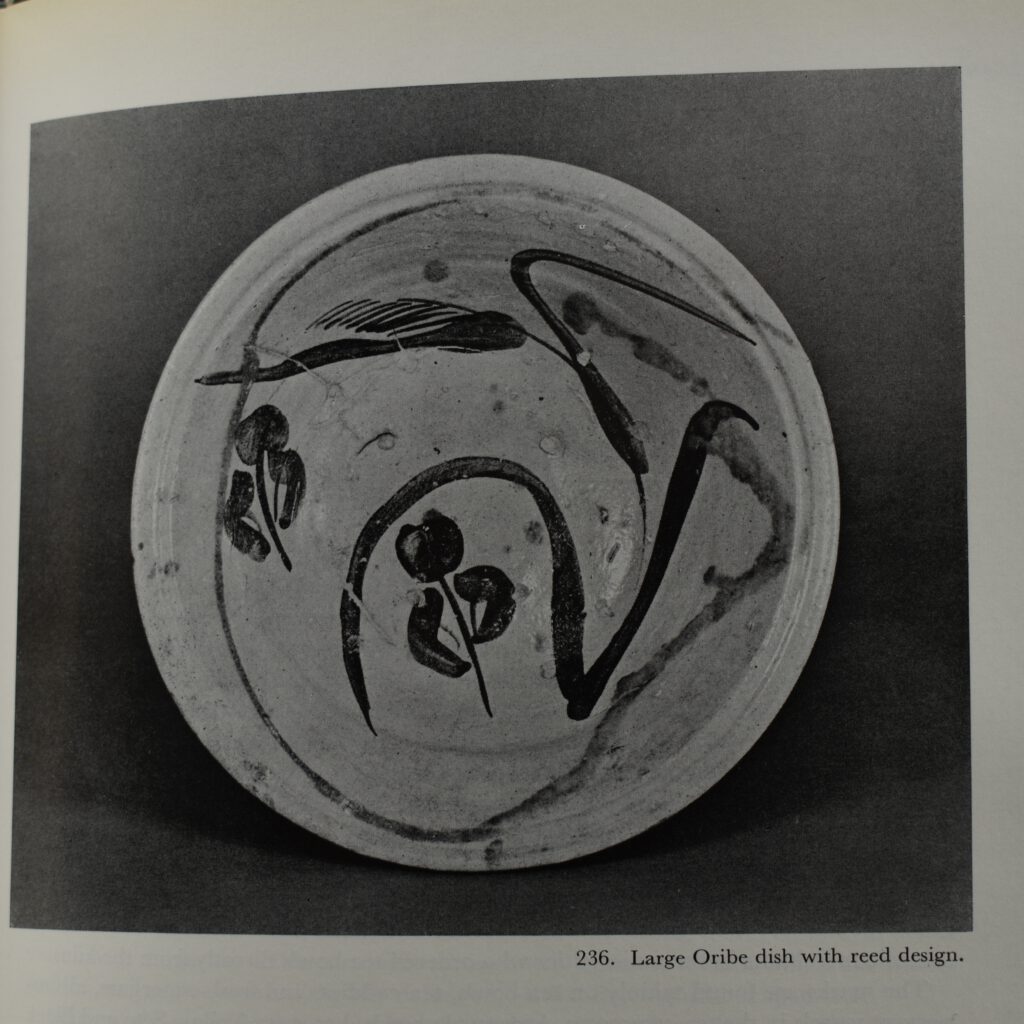 A literal translation doesn't work well for the Japanese concept known of Wabi-Sabi. We have imprinted in us a sense of permanence connected with the Classical order, symmetry, things being right, perfect, pristine even. We know an Imperial Qing or Sèvres vase is good quality because it tells us so. The material, fine translucent porcelain, is decorated in rich colours, even gold, the surface filled with decoration that wears its wealth in clear public view. It is perfect and perhaps if we own it will get somewhere nearer perfection ourselves. The Japanese aesthetic of Wabi-Sabi shows us something quite different. Life is imperfect, we are imperfect, the art of life is to live with it. Perhaps, the nearest we get to permanence is the inevitable realisation that transience is part of the ebb and flow of how things are. Nothing is perfect, Wabi-Sabi allows us to see the beauty inherent in imperfection, the rustic and the melancholy. A potter's finger marks on the surface of a pottery bowl, the roughness of a pottery. A ceramic surface can become a landscape in which the eye walks over humble cracks, uneven, faulty, the mind in austere contemplation. Wabi-Sabi can be condensed to 'wisdom in natural simplicity'.

Wabi-Sabi stems from from Zen Buddhist thought, 'The Three Marks of Existence' ; impermanence, suffering and the emptiness or absence of self-nature. These ideas came to Japan from China in the Medieval Period, they have developed over the centuries and have greatly affected Japanese culture. For example the Japanese tea ceremony, which is the embodiment of perfection, uses ceramics which are imperfect. It was not just the pottery made in Japan that needed to have a Wabi-Sabi nature but also the Chinese porcelain made for the Japanese tea ceremony. During the late Ming dynasty the Chinese supplied Japan with porcelain for the tea ceremony, not just for the ceremony itself but for the meal that was taken with it, the Chinese even supplied charcoal burners for them to light their pipes. This Chinese porcelain was made at Jingdezhen to Japanese designs, sent from Japan. The Japanese wanted the Chinese to work against their normal way, they requested firing faults, imperfections and unevenness. The Chinese were sometimes rather too precise in their making of these imperfections, often adding faults carefully and even symmetrically. I imagined they could have thought, 'why do our customers want us to make these things so badly'. Clearly Wabi-Sabi was lost on them.