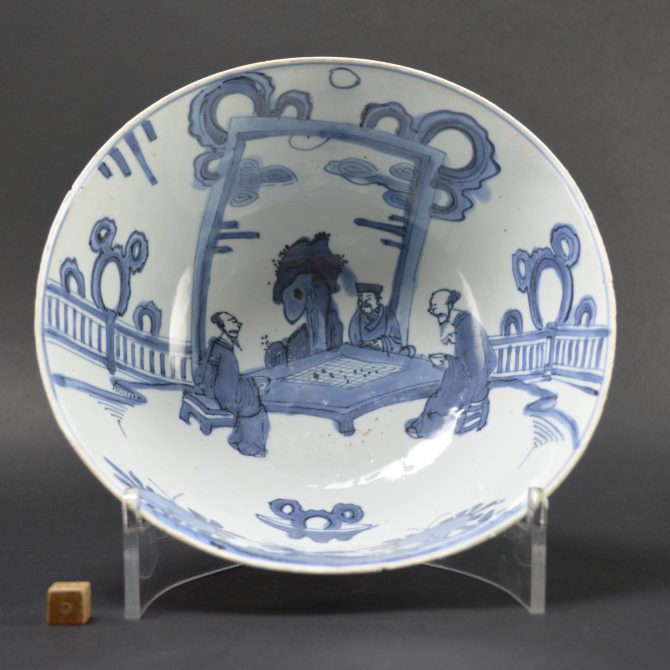 An Unusual Late Ming Blue and White Porcelain Bowl. Transitional  Period, Emperor Tianqi 1621 – 1627. Perhaps made for the Japanese Market. It is very unsual in that the whole interor of the bowl is painted with a single scene that extends up the walls of the bowl. The scene is of three scholars around a table playing ‘Weiqi‘ infront of a large garden arch. The exterior is painted with an extensive landscape. 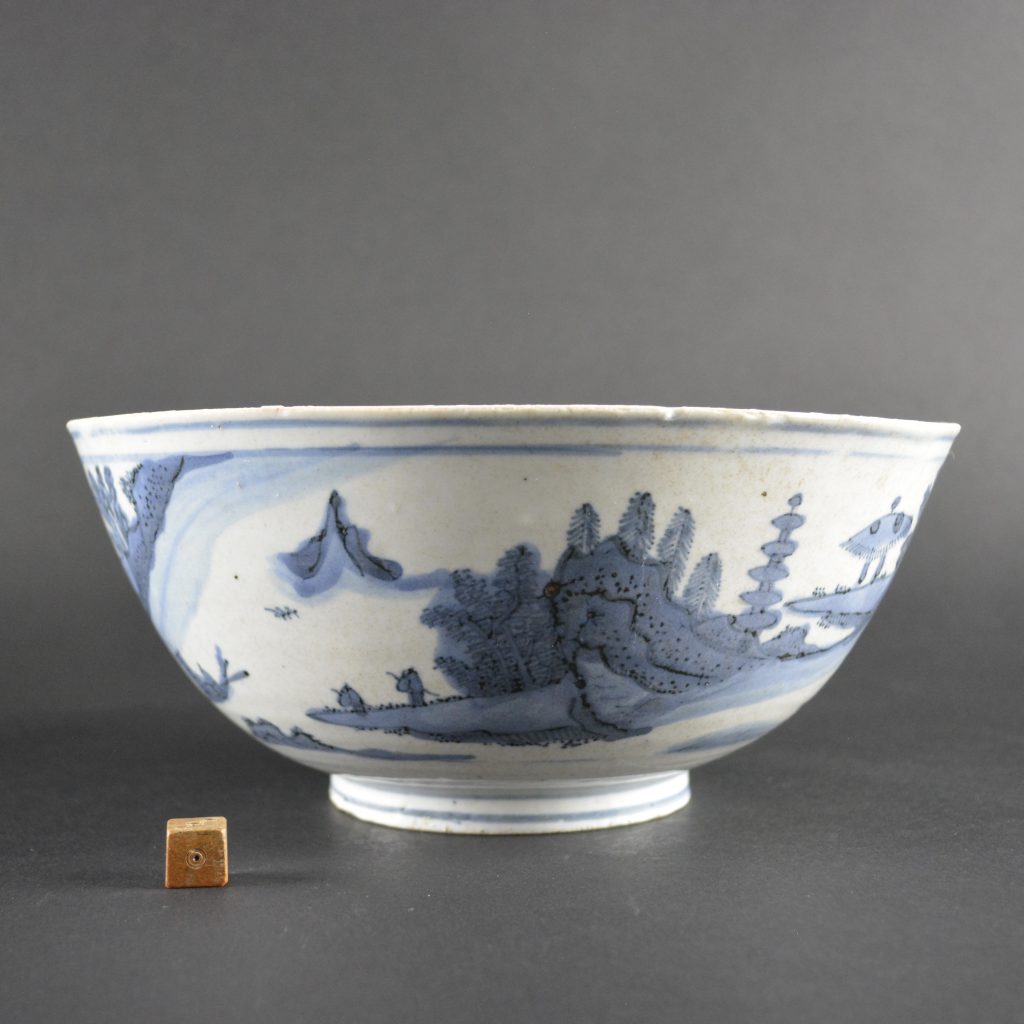 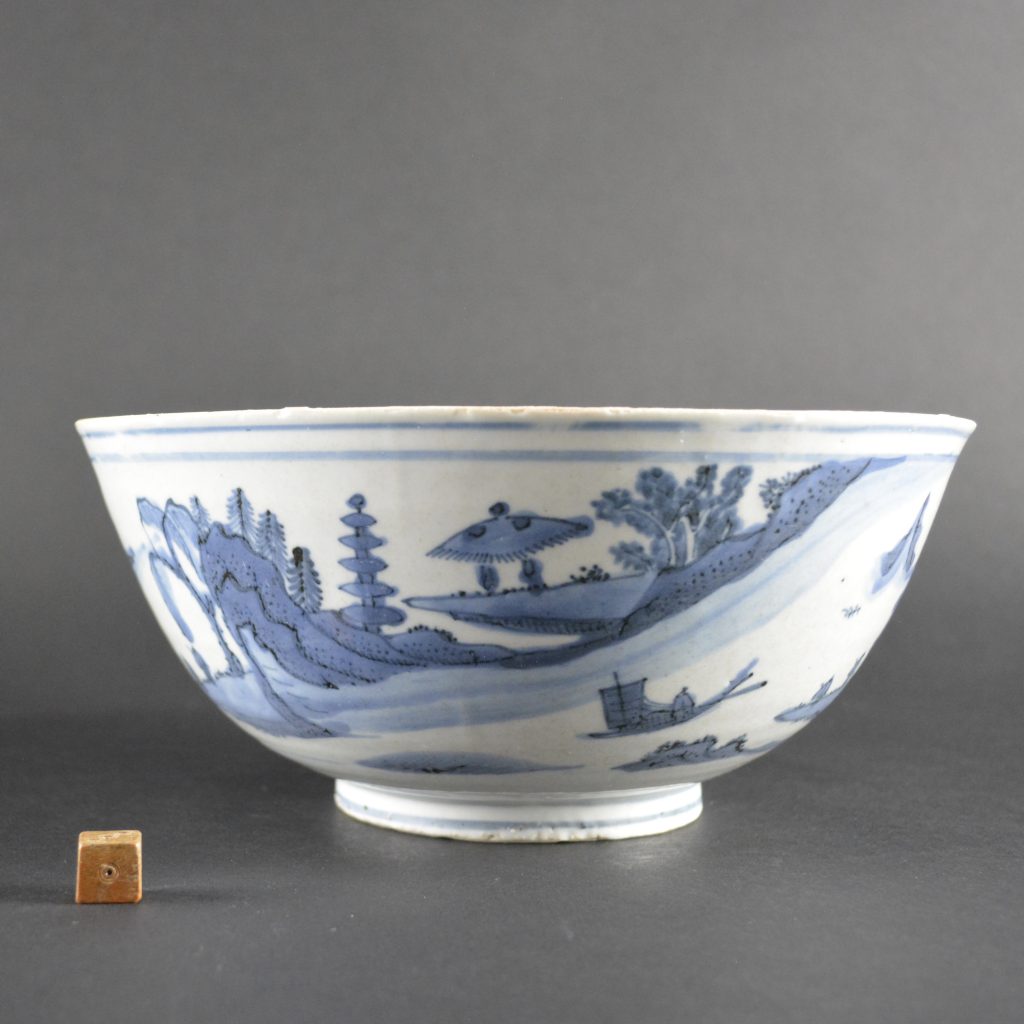 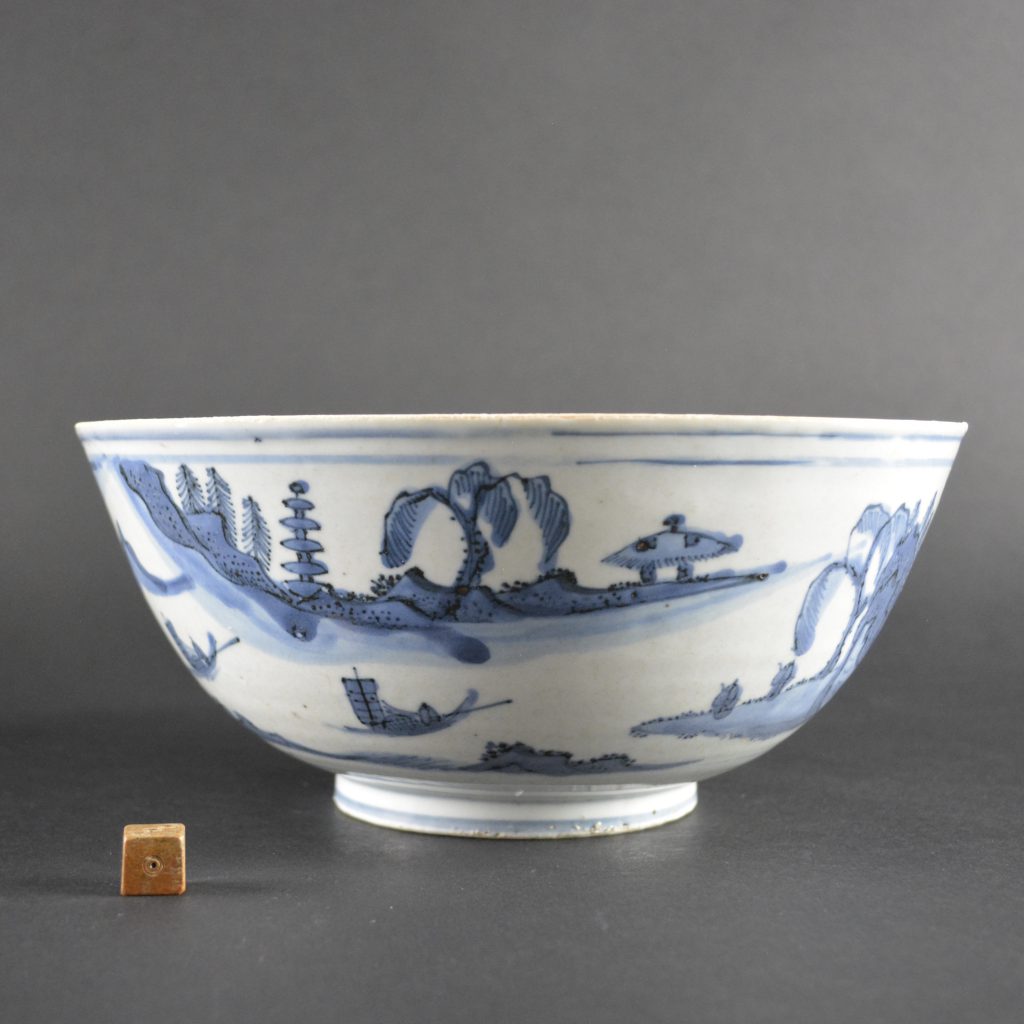 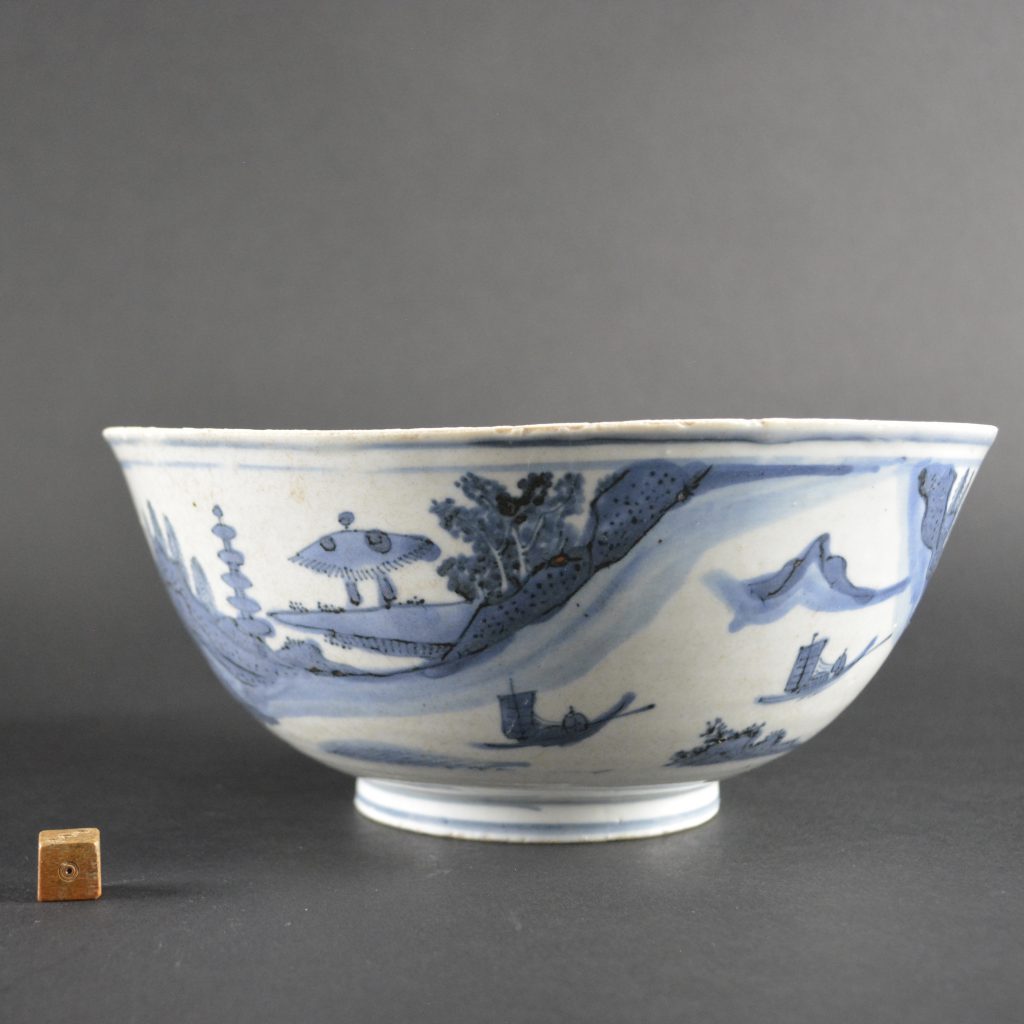 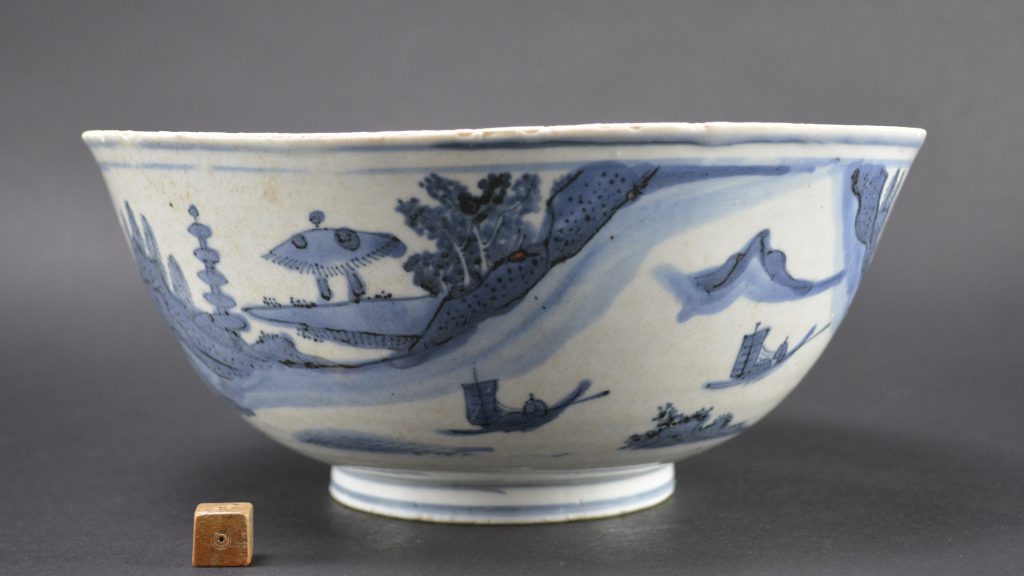 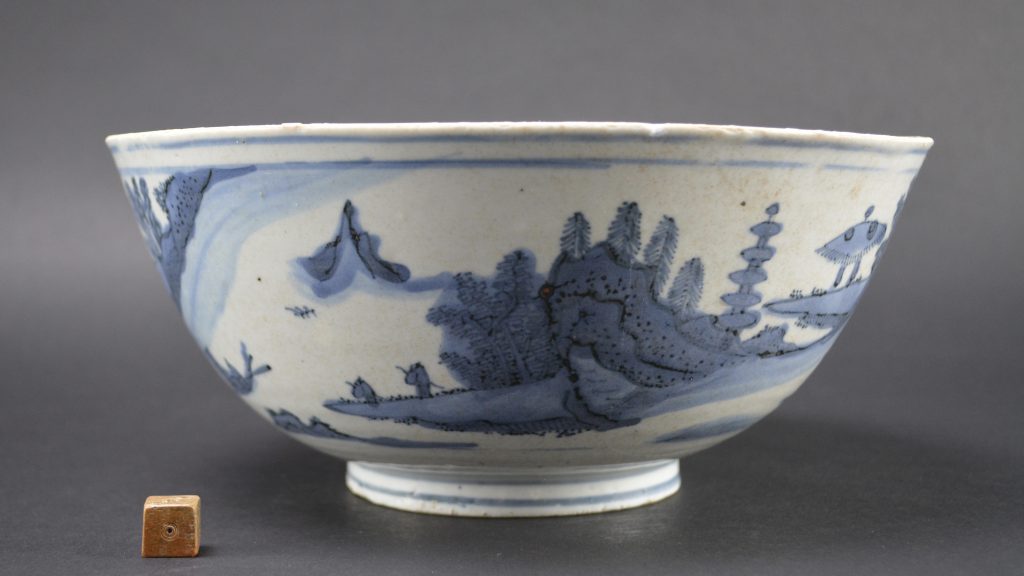 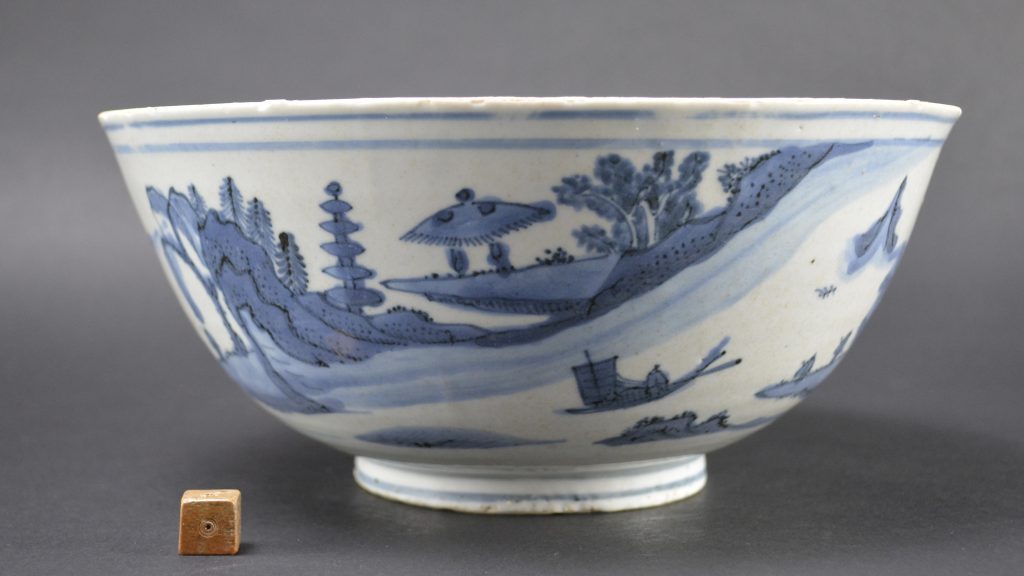 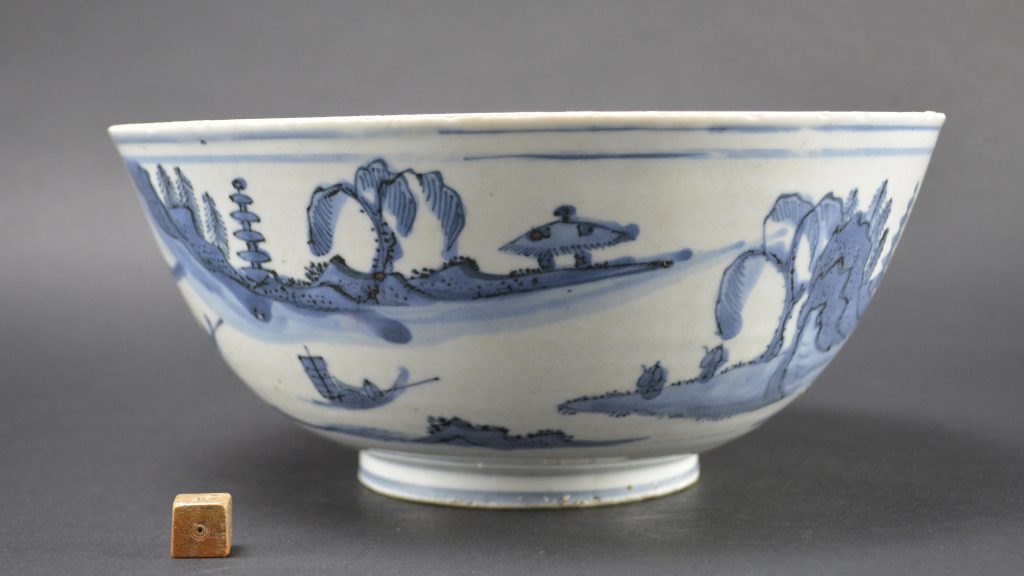 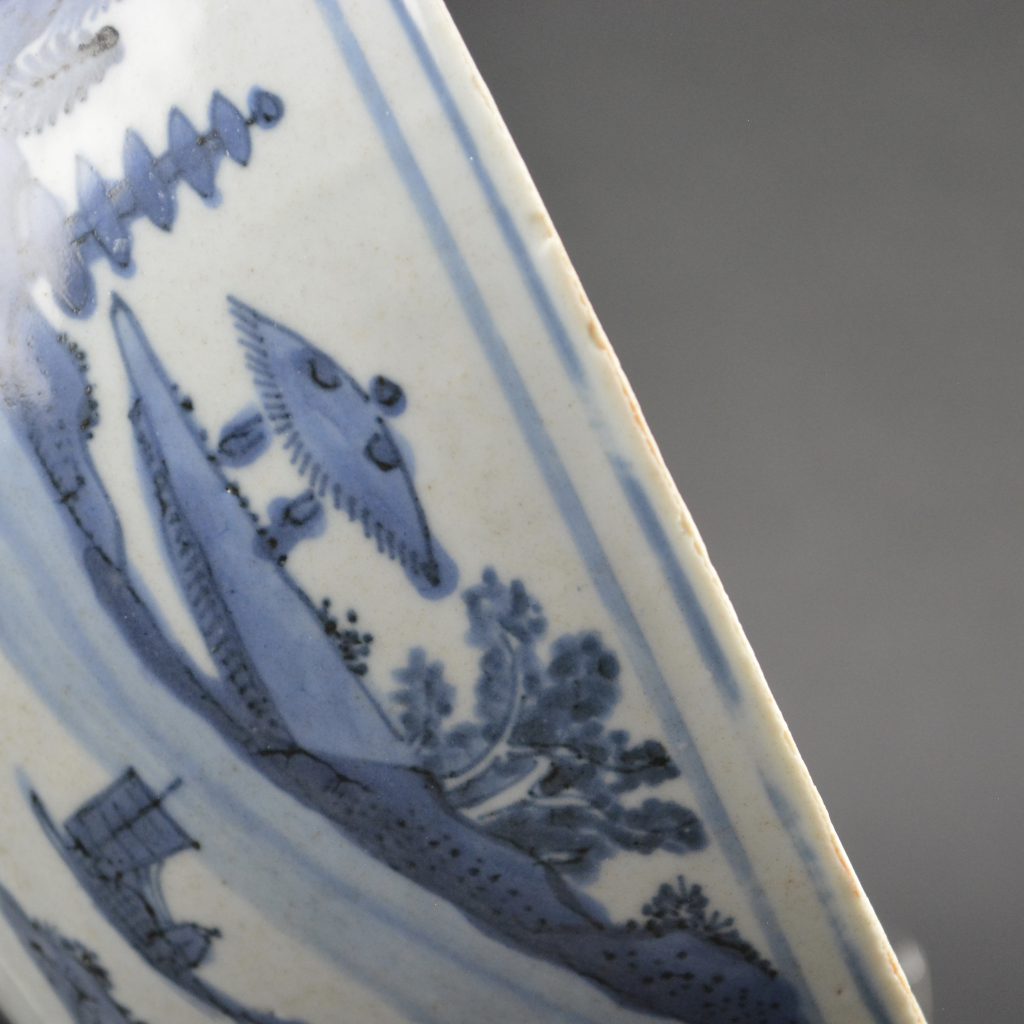 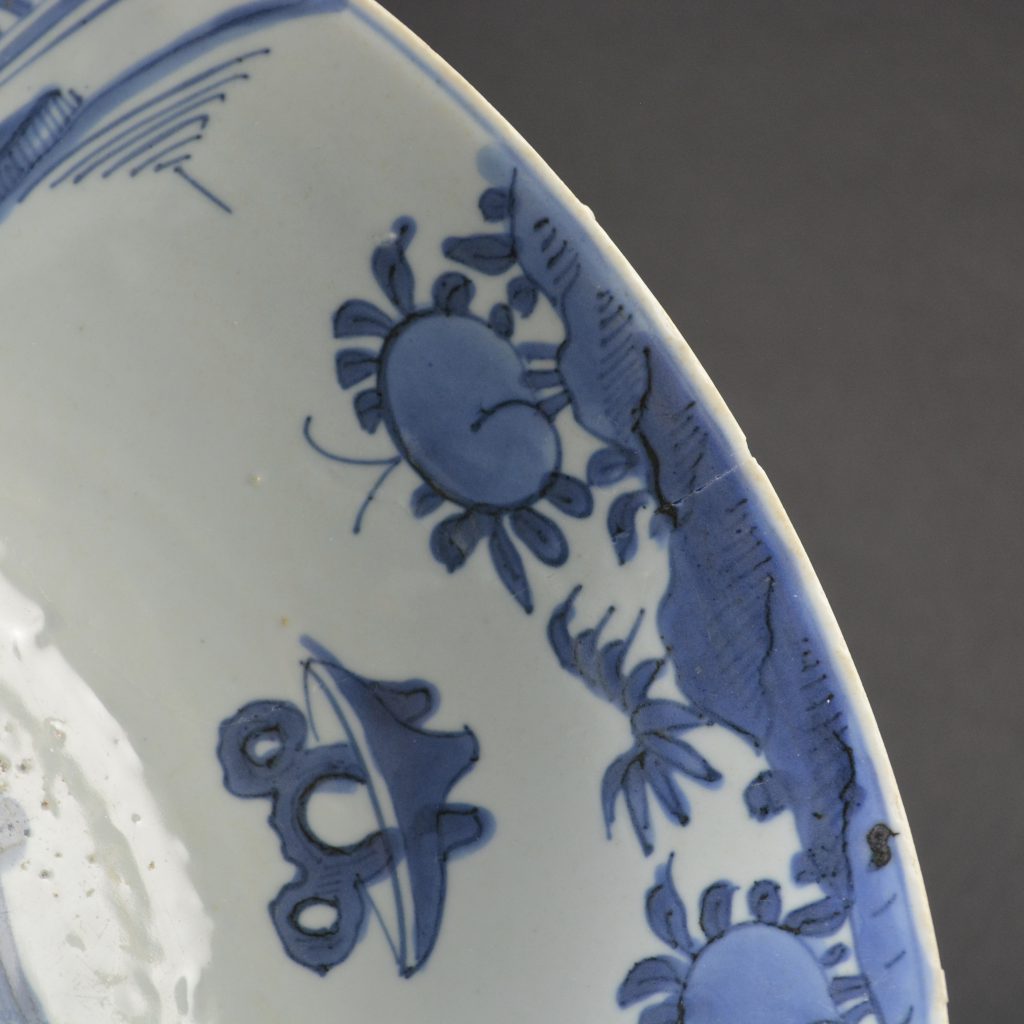 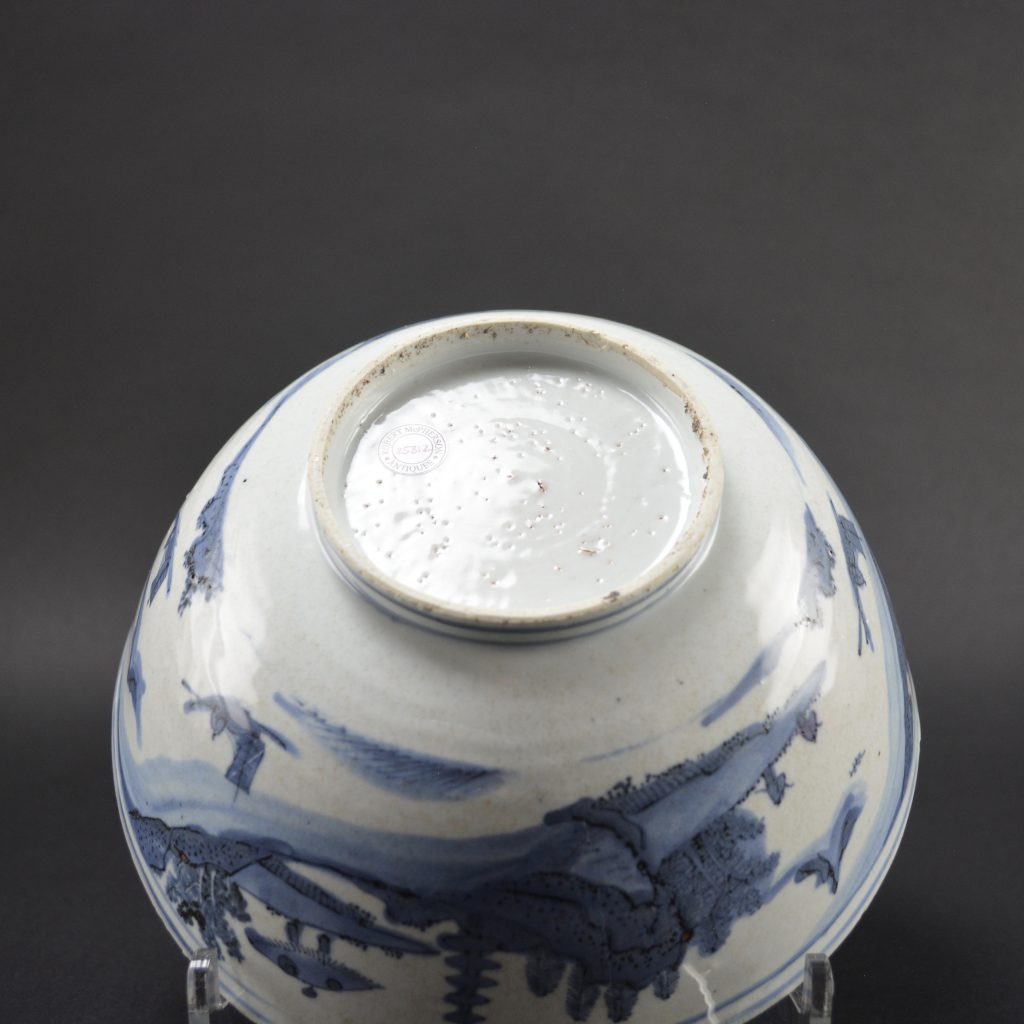 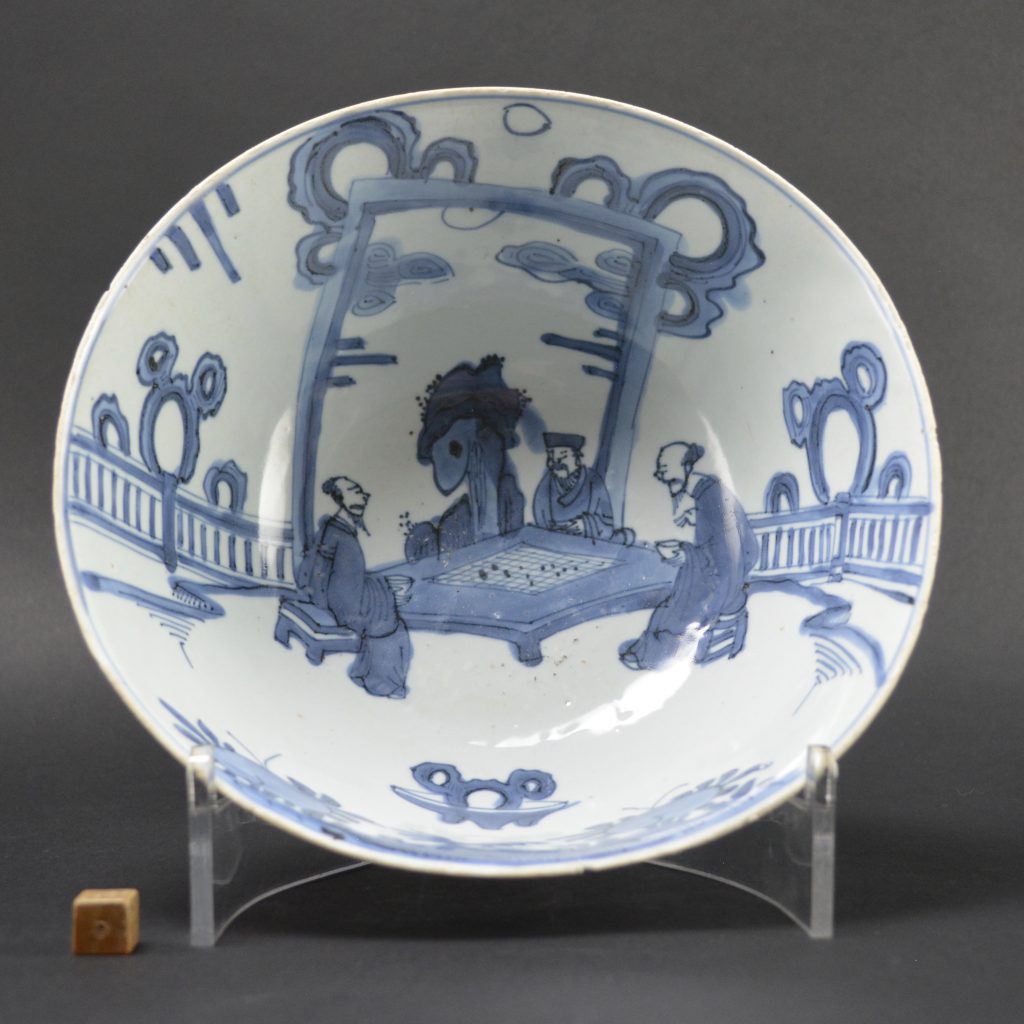 During the late Ming Period the Chinese made a large among of porcelain for the Japanese market, it was made from the Wanli period (1573-1620) and ended in the Chongzhen period (1628-1644), the main period of production being the 1620`s and 1630`s. The porcelain objects produced were made especially for the Japanese market, both the shapes and the designs were tailored to Japanese taste, the production process too allowed for Japanese aesthetics to be included in the finished object. Its seams firing faults were added, repaired tears in the leather-hard body were too frequent to not, in some cases, be deliberate. These imperfections as well as the fritting Mushikui (insect-nibbled) rims and kiln grit on the footrims all added to the Japanese aesthetic. The shapes created were often expressly made for the Japanese tea ceremony meal, the Kaiseki, small dishes for serving food at the tea ceremony are the most commonly encountered form. Designs, presumably taken from Japanese drawings sent to China, are very varied, often using large amount of the white porcelain contrasting well with the asymmetry of the design.

The roots of this unsettled period starts during the later part of Wanli`s reign (1573-1620). At the begging of his reign China was doing very well, new crops from the Americas such as peanuts, maize and sweet potatoes increased food production, while simplified taxes helped the state run smoothly. But this was not due to Wanli`s enlightened reign, but to his Mother championing a man that was to become the Ming dynasties most able minister, Zhang Zhuzheng (1525—1583).

Wanli became resentful of Zhuzheng`s control but upon his death became withdrawn from court life. Between 1589 to 1615 he didn`t appear at imperial audiences, leaving a power vacuum that was filled by squabbling ministers. Mongols from the North raided as Japan invaded Korea. Wanli re-opened the silver mines and imposed new taxes but the money was lost due to corruption, as well as being frittered away by the indulgent Emperor himself .

The next emperor of Ming China, Tianqi (1621-1627), was bought up in this self indulgent disorganised environment, at the very young age 15 his short reign started. He didn`t stand a chance. Tianqi made the mistake of entrusting eunuch Wei Zhongxian (1568-1627) who Anna Paludan in her excellent book “Chronicle of the Chinese Emperors” (Thames and Hudson, 1998) describes as “a gangster of the first order”. Tianqi was deemed to have lost the Mandate of heaven by the Ming people. Tianqi`s younger brother, the last of the Ming Emperors, Chongzhen (1628-1644), was not able to save the situation. The systems of administration had broken down, corruption was rife and so when a sever famine broke out in 1628 nothing much could be done. Anna Paludan describes the tragic end to the great Ming Dynasty “The final drama was worthy of a Greek tragedy. The imperial troops fled or surrendered, and the emperor, after helping his two sons escape in disguise, got drunk and rushed through the palace ordering the women to kill themselves. The empress and Tianqi`s widow committed suicide; the emperor hacked off the arm of one daughter before killing her sister and the concubines. At dawn he laid his dragon robe aside and dressed in purple and yellow, with one foot bare, climbed the hill behind the now silent palace and hanged himself on a locust tree”.

The Great Wall of China, started 2,000 years ago was built to protect China from the Northern barbarian hoards, it was often tested and sometimes failed. The Jin people invaded China, ruling the North between 1115 and 1234, it was their descendants the Manchus, Jurchens from south east Manchuria that took full advantage of the problems of the Ming dynasty. In 1636 they adopted a Chinese dynastic name, the `Great Qing` (Qing meaning pure). The first of the Qing emperors was Shunzhi (1644-1661) but for most of his reign his uncle ran the state. War raged on during this period and it wasn`t until the second Qing emperor Kangxi (1662-1722) that true peace was achieved. Kangxi was a wise and educated man, he became a highly successful emperor bringing China a long period of wealth and stability.

Go known in Chinese as Weiqi and Go in Japan, is an ancient board game for two players that is noted for being rich in strategy despite its simple rules. The game is played by two players who alternately place black and white stones on the vacant intersections of a grid of 19×19 lines. The object of the game is to control (surround) a larger portion of the board than the opponent. Weiqi originated in ancient China more than 2,500 years ago, and although it is not known exactly when the game was invented, by the 3rd century BC it was already a popular pastime, as indicated by a reference to the game in the Analects of Confucius. Weiqi reached the West through Japan, which is why it is commonly known by its Japanese name.