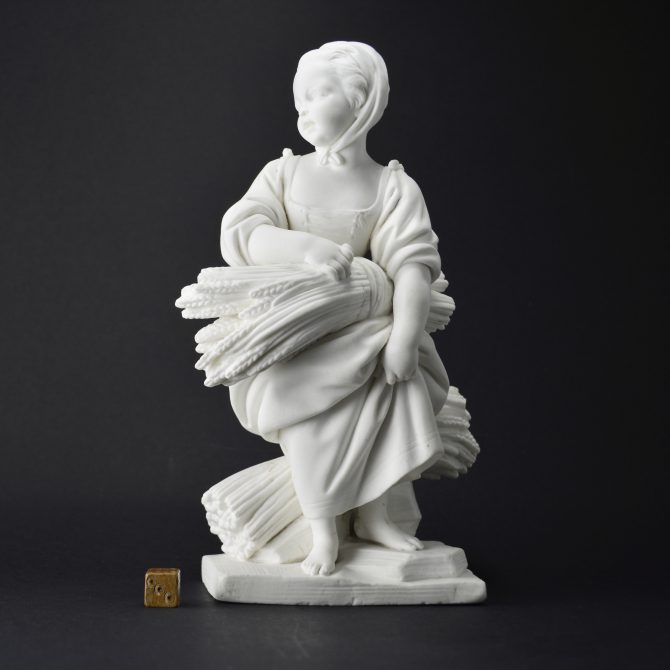 An 18th century Sevres biscuit porcelain model of a girl c.1757-1766 by Pierre Blondeau after Boucher. ‘La Moissonneuse’ or ‘The Reaper’ depicts a peasant girl based on a painting or drawing by Boucher, she is depicted with two bundles of corn on a rectangular base. The base incised ‘F’ is for Falconet, it was thought that he was often the modeller, however the incised ‘F’ is a sign that he passed the work on the grounds of its quality.

Condition
A loss to the end of the wheat in her arms, three small losses to the bundle of wheat behind her.
Size
Height : 20.2 cm (8 inches)
Provenance
N/A
Stock number
25223 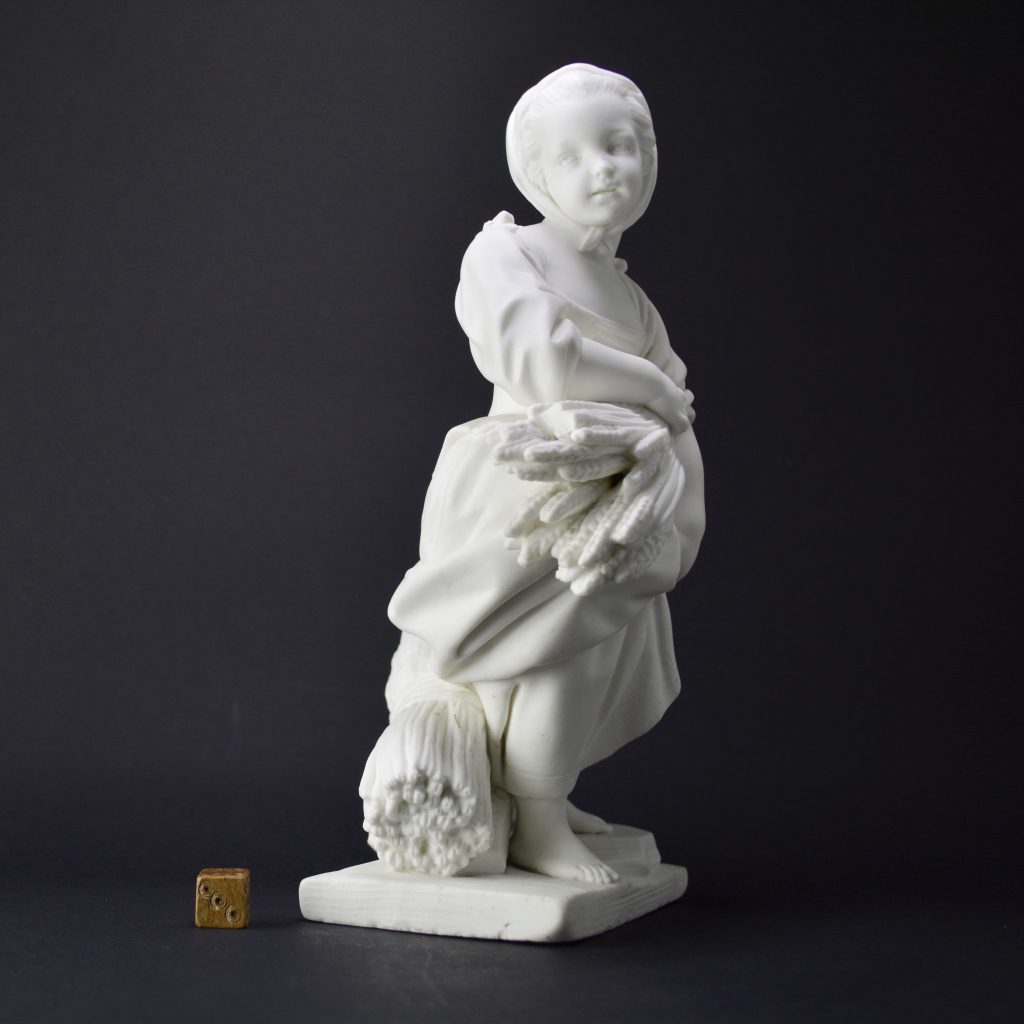 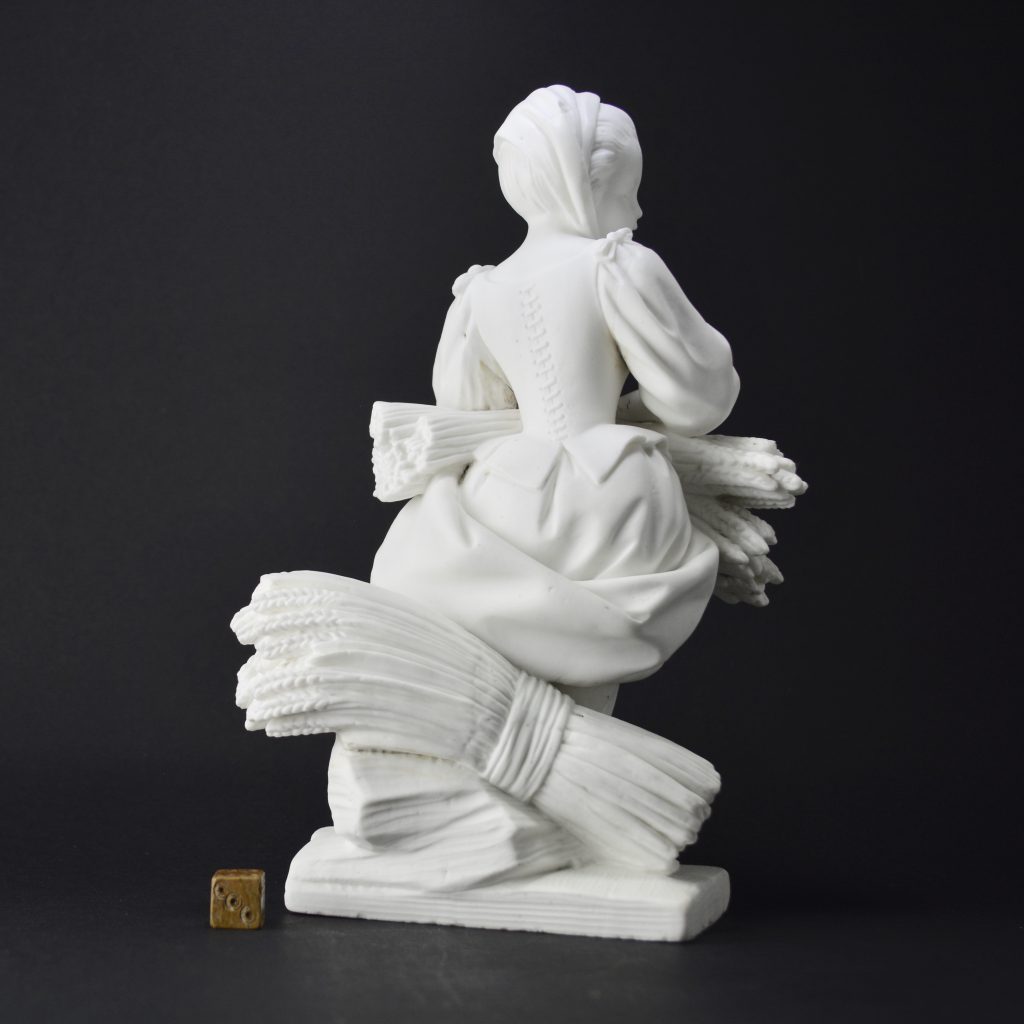 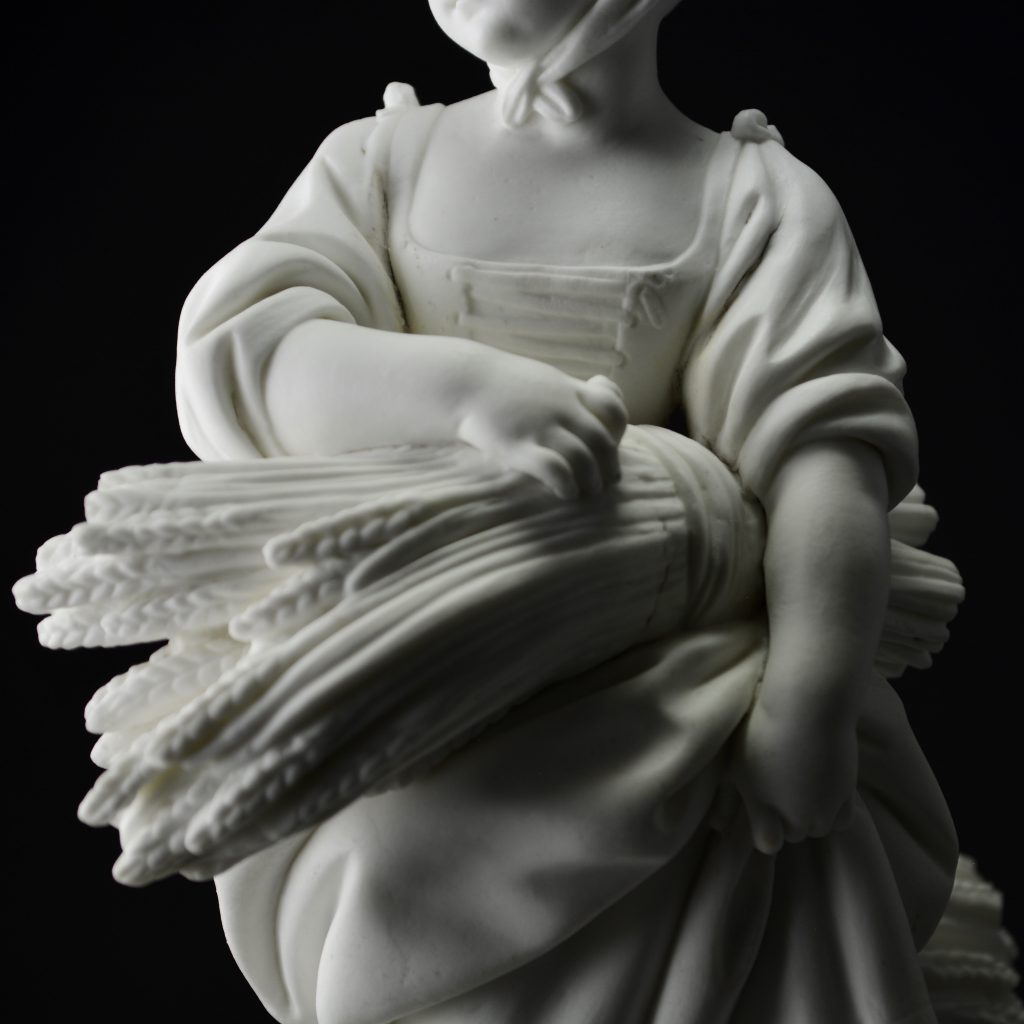 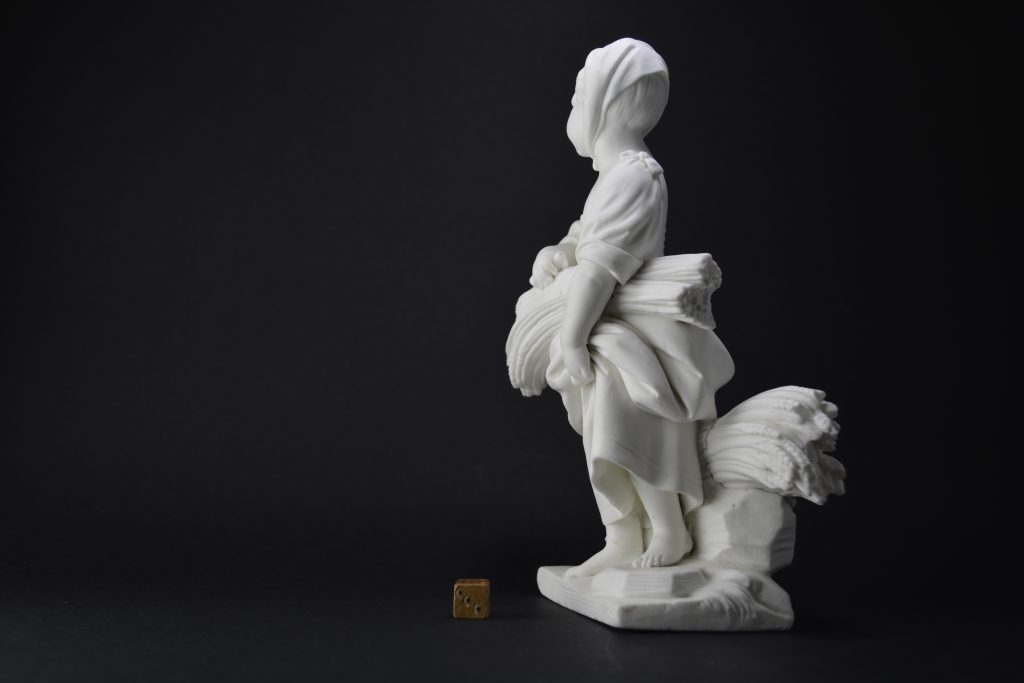 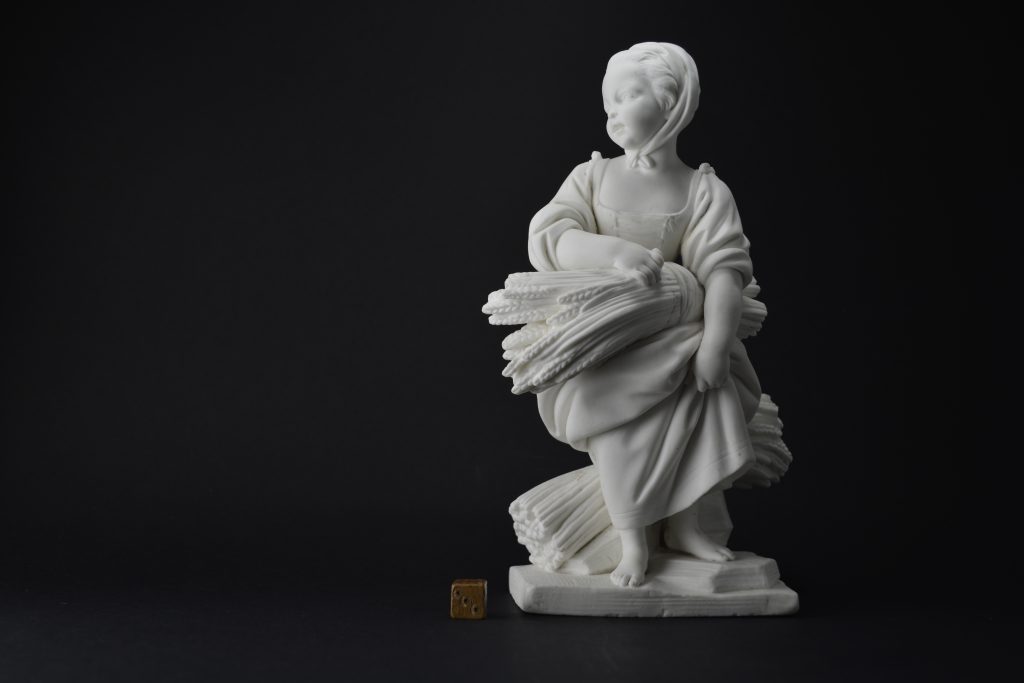 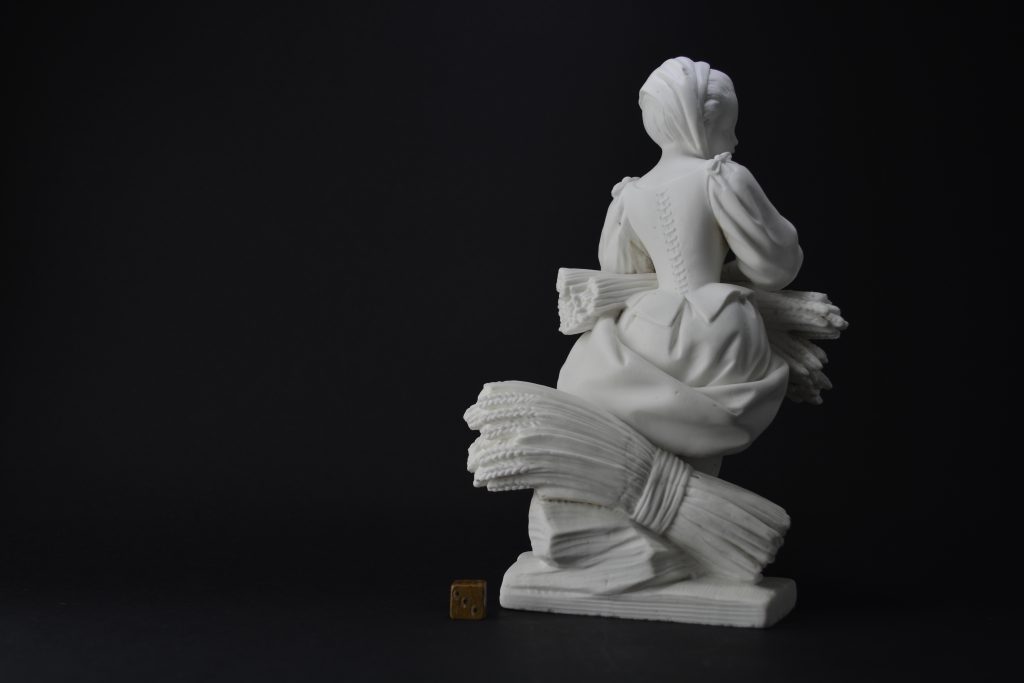 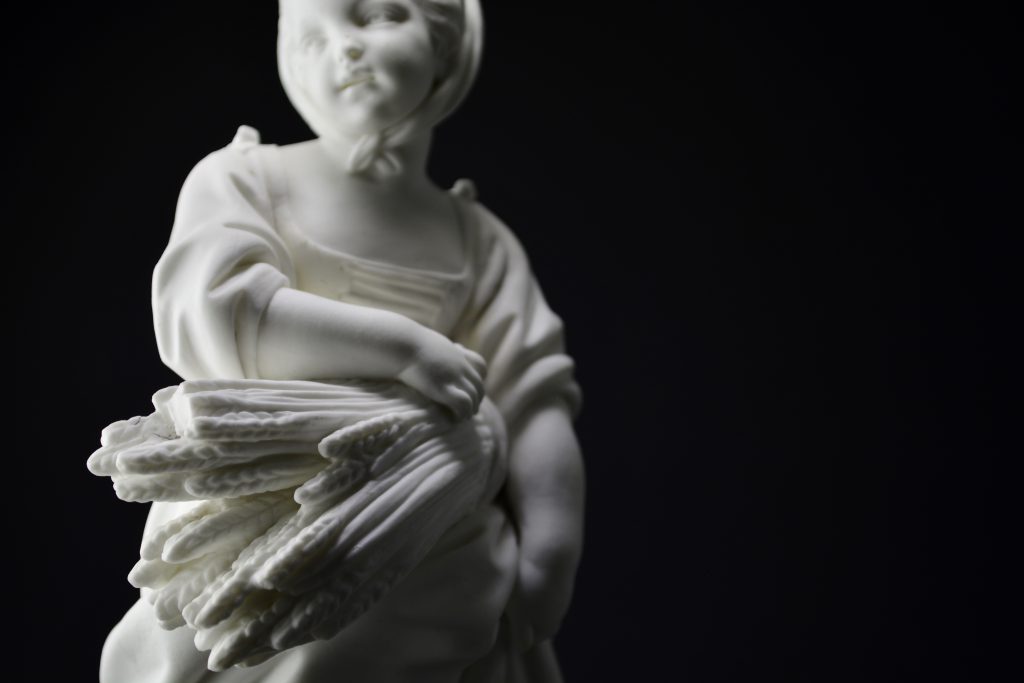 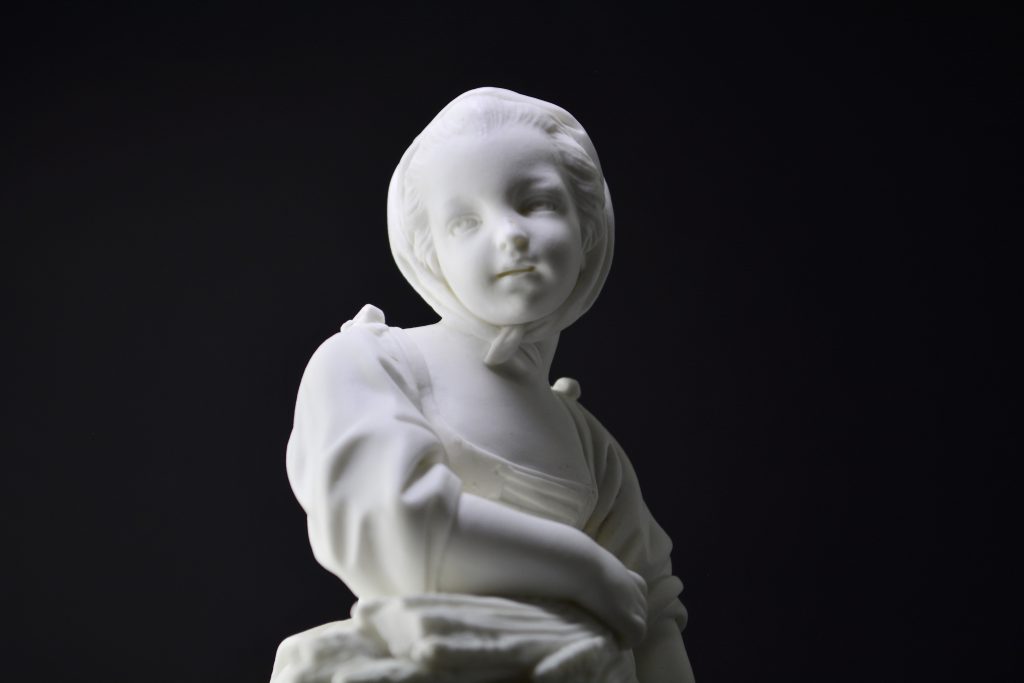 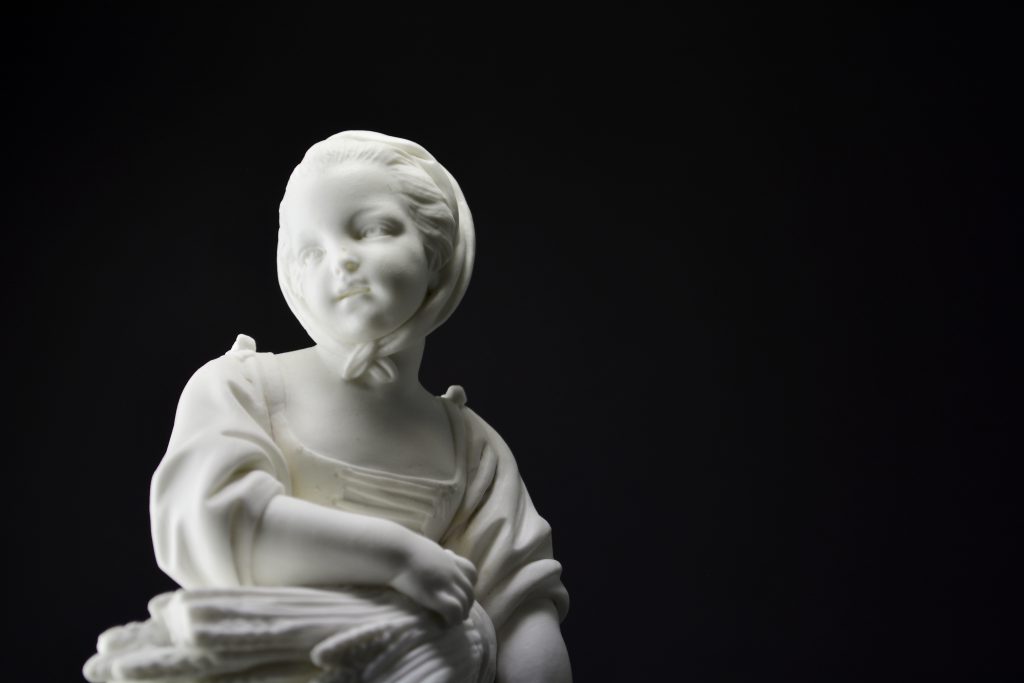 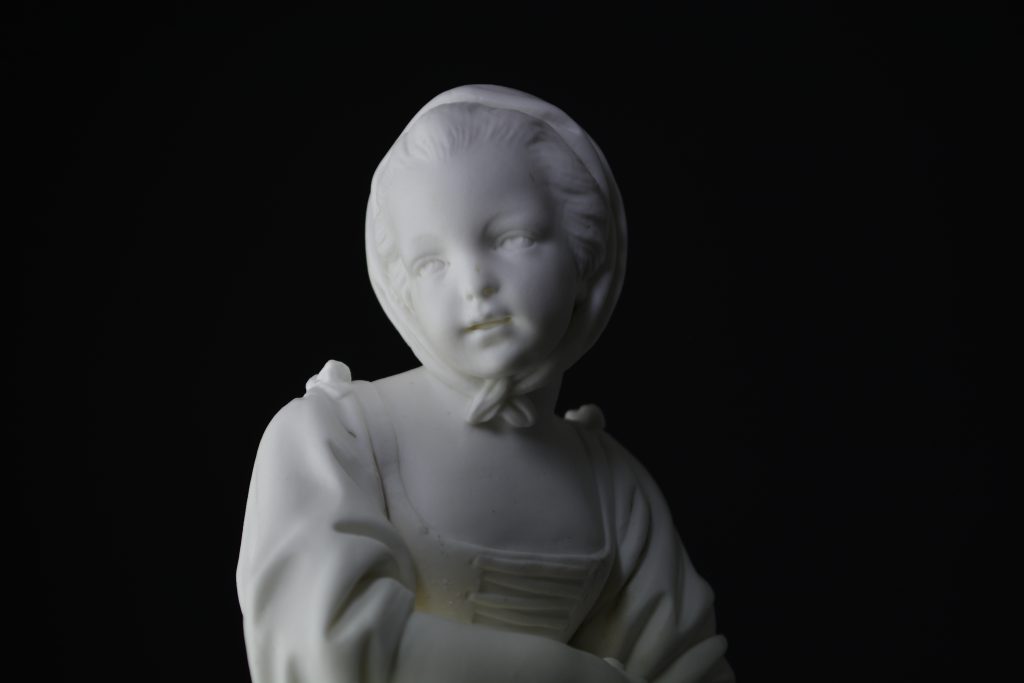 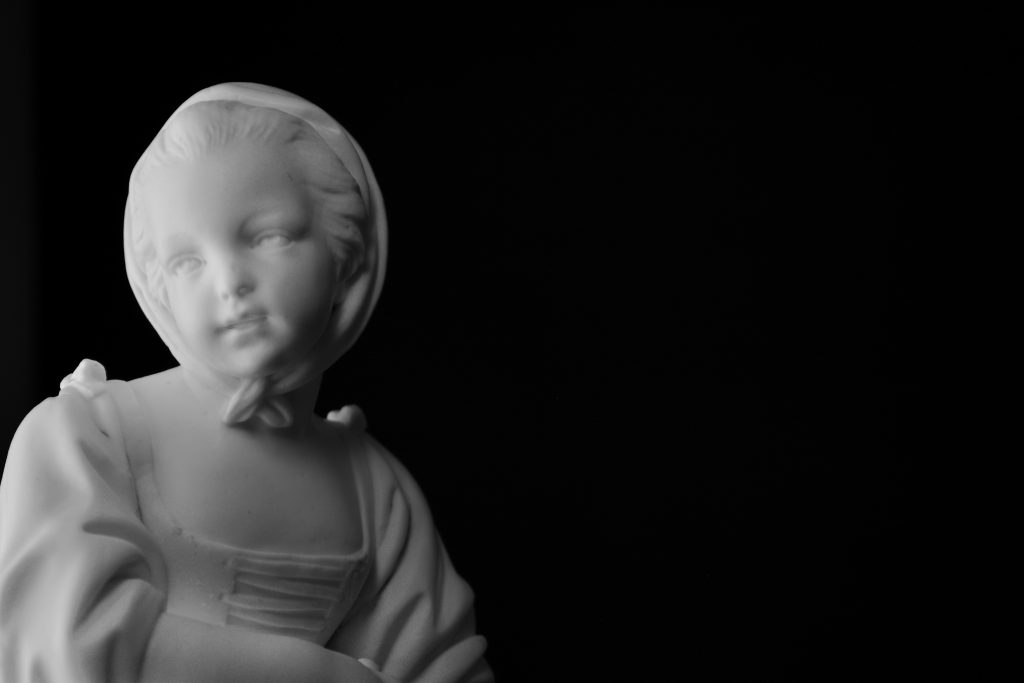 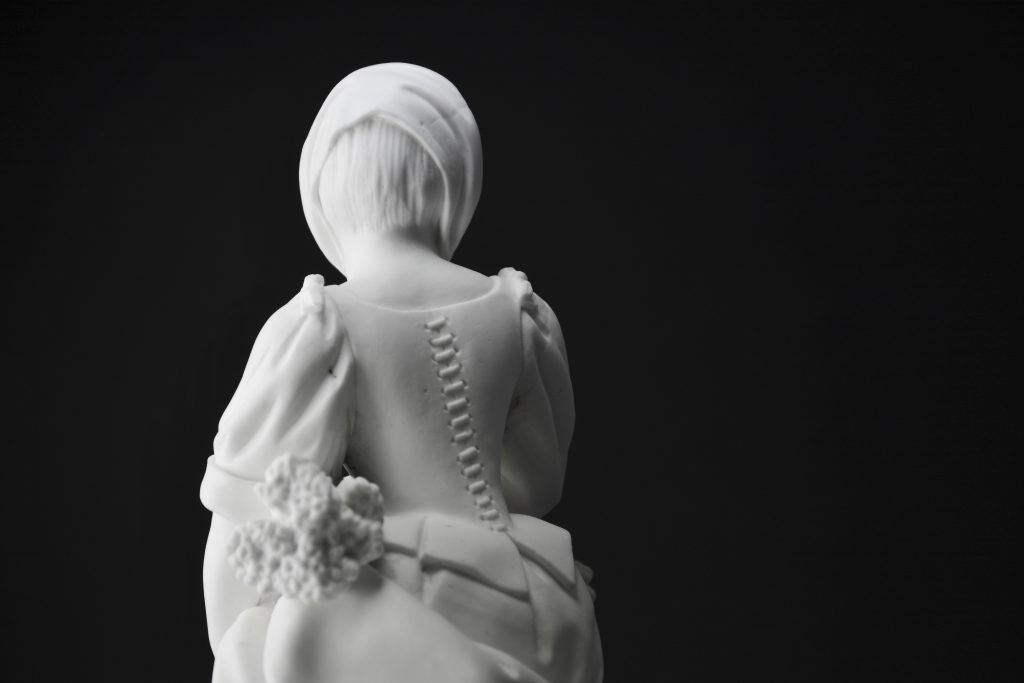 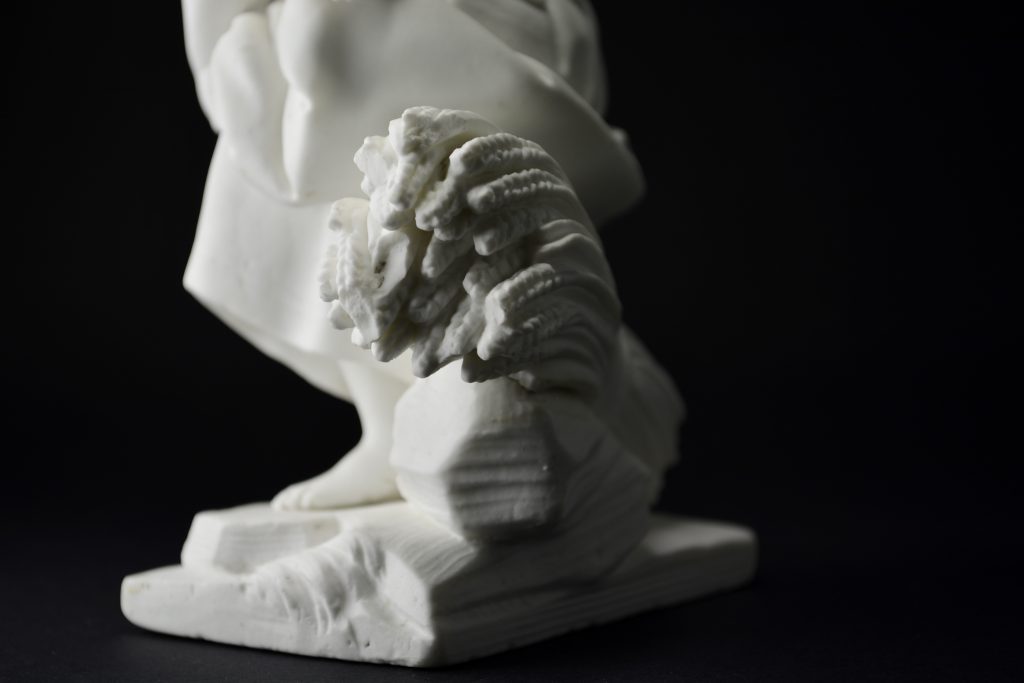 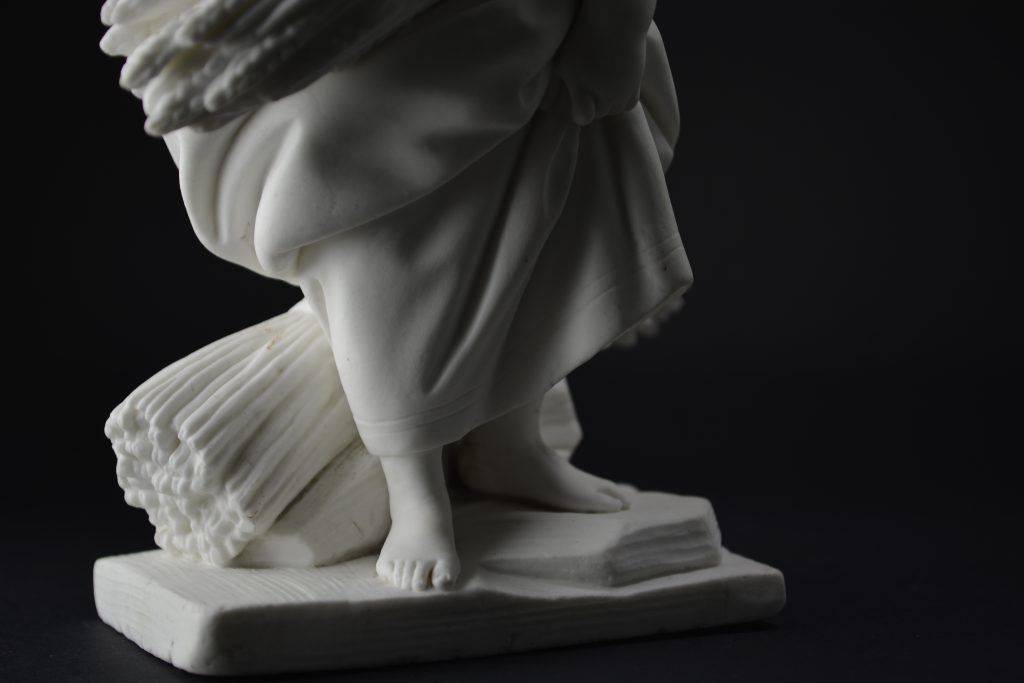 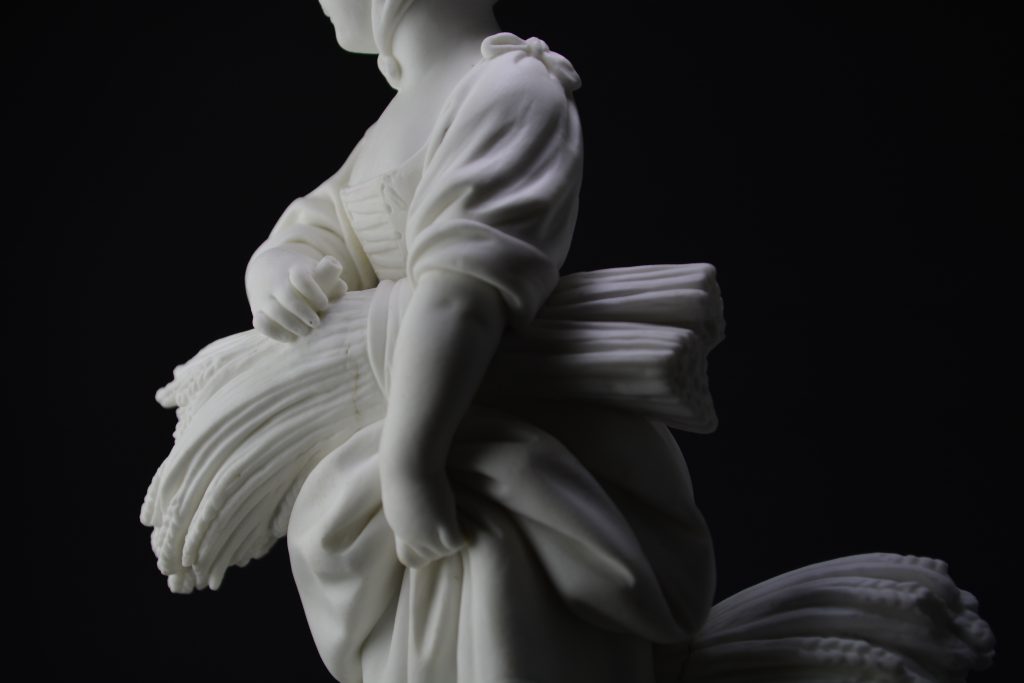 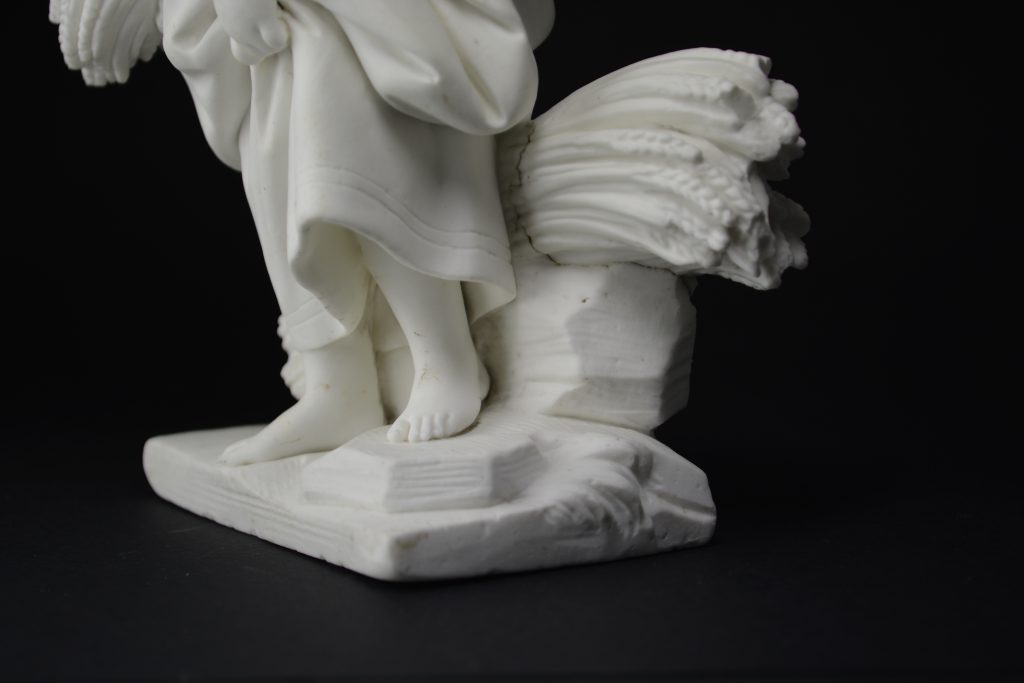 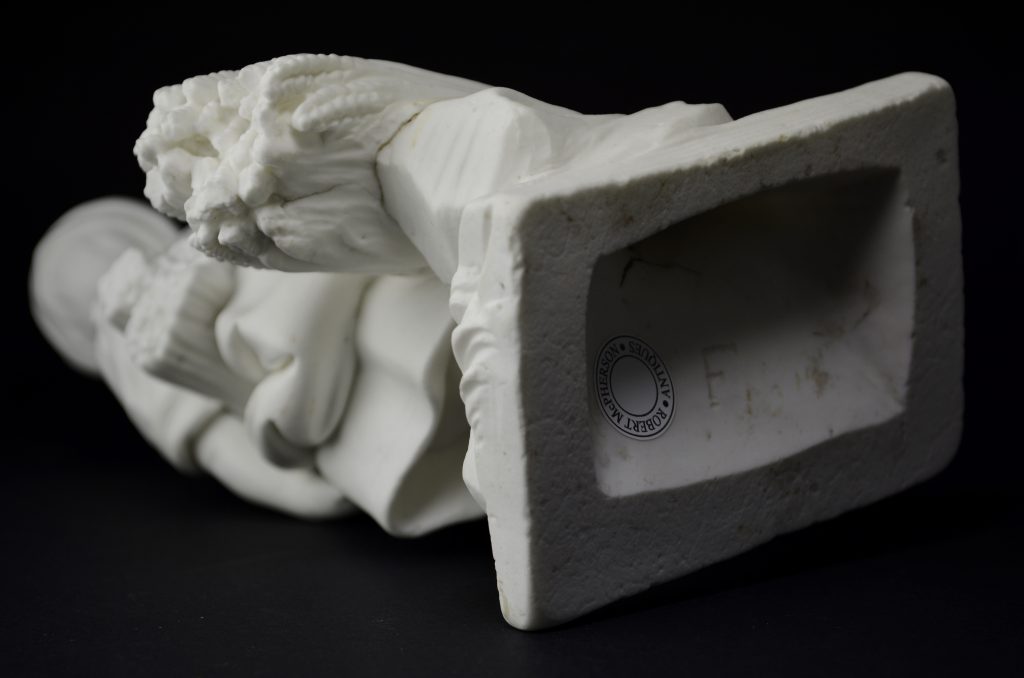 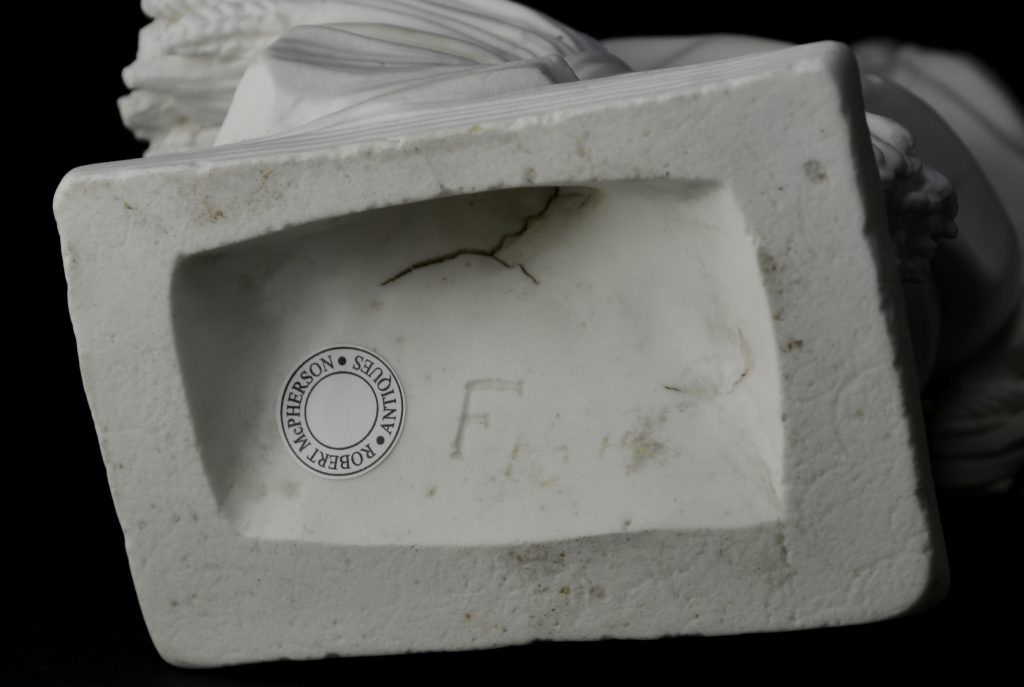 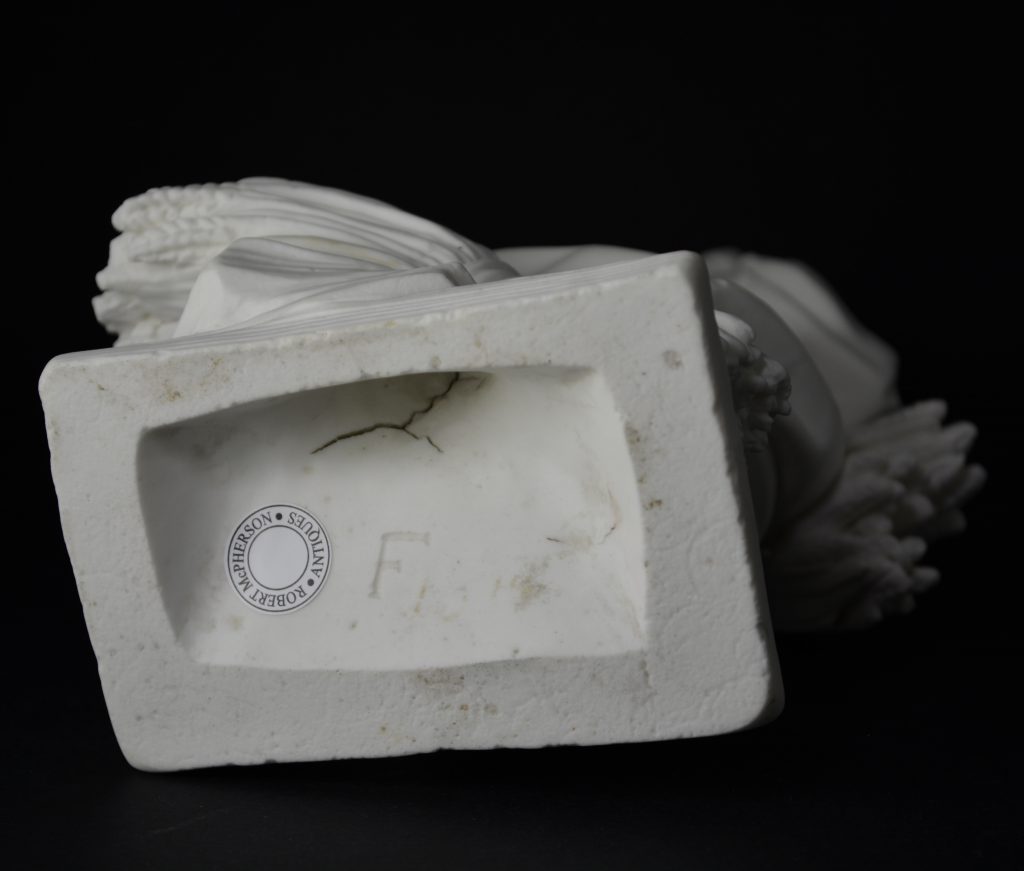 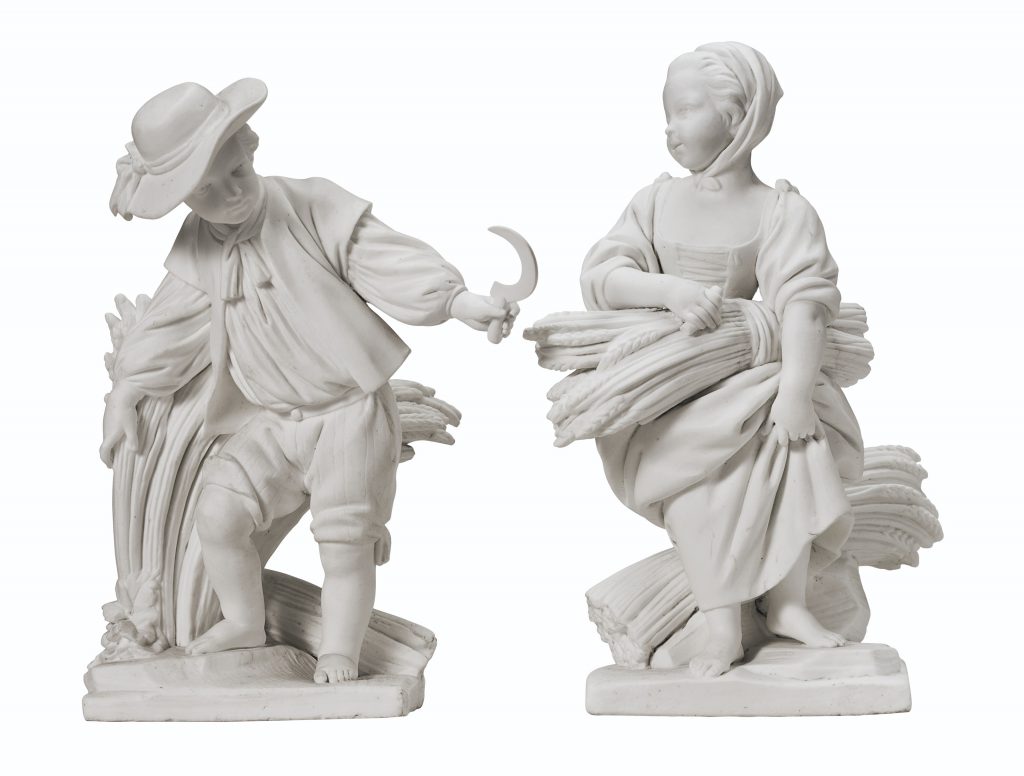 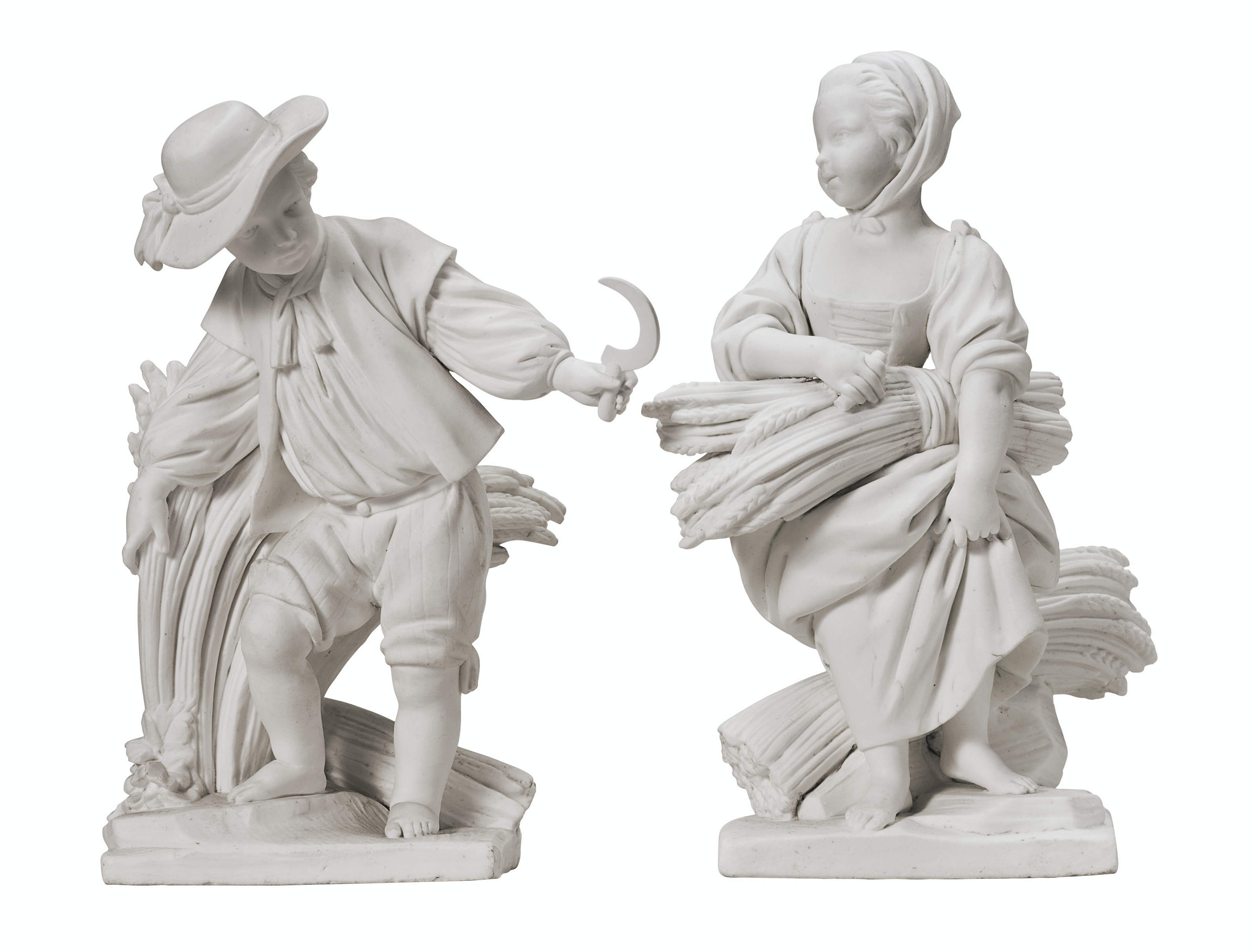 Falconet (1716 – 1791) is counted among the finiest French Rococo sculptors of the period, his patron was none other than Mme de Pompadour.

Falconet was born to a poor family in Paris. He was at first apprenticed to a carpenter, but some of his clay figures, with the making of which he occupied his leisure hours, attracted the notice of the sculptor Jean-Baptiste Lemoyne, who made him his pupil. One of his most successful early sculptures was of Milo of Croton, which secured his admission to the membership of the Académie des beaux-arts in 1754.

He came to prominent public attention in the Salons of 1755 and 1757 with his marbles of L’Amour and the Nymphe descendant au bain (also called "The Bather"), which is now at the Louvre. In 1757 Falconet was appointed director of the sculpture atelier of the new Manufacture royale de porcelaine at Sèvres, where he brought new life to the manufacture of small sculptures in unglazed soft-paste porcelain figurines that had been a specialty at the predecessor of the Sèvres manufactory, Vincennes. 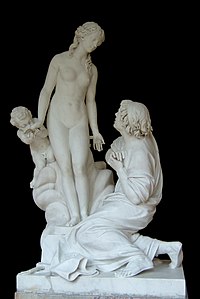 He remained at the Sèvres post until he was invited to Russia by Catherine the Great in September 1766. At St Petersburg he executed a colossal statue of Peter the Great in bronze, known as the Bronze Horseman, together with his pupil and stepdaughter Marie-Anne Collot. In 1788, back in Paris he became director of the Académie des beaux-arts. Many of Falconet's religious works, commissioned for churches, were destroyed at the time of the French Revolution. His work on private commission fared better.

He found time to study Greek and Latin, and also wrote several brochures on art: Denis Diderot confided to him the chapter on "Sculpture" in the Encyclopédie , separately released by Falconet as Réflexions sur la sculpture in 1768. Three years later, he published Observations sur la statue de Marc-Aurèle, which may be interpreted as the artistic program for his statue of Peter the Great. Falconet's writings on art, his Oeuvres littéraires came to six volumes when they were first published, at Lausanne, in 1781–1782.

Falconet's somewhat prettified and too easy Rococo charm incurred the criticism of the Encyclopædia Britannica 1911: "His artistic productions are characterized by the same defects as his writings, for though manifesting considerable cleverness and some power of imagination, they display in many cases a false and fantastic taste, the result, most probably, of an excessive striving after originality."