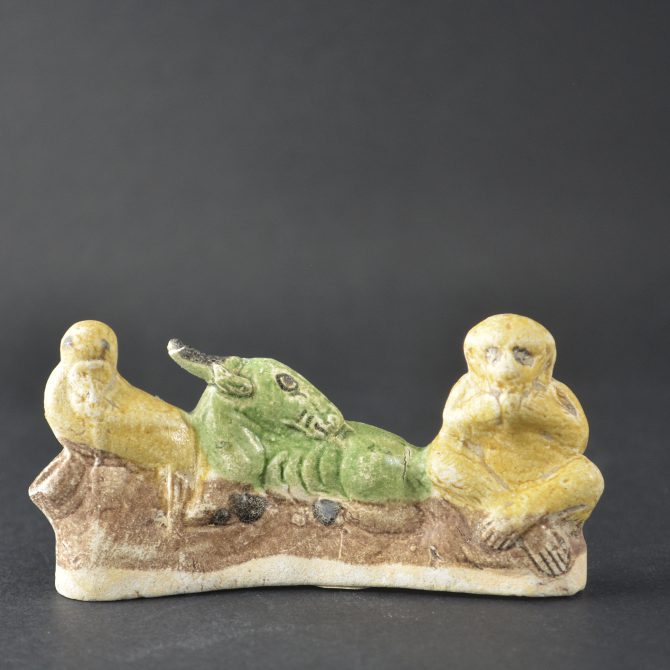 A Yongzheng Biscuit Porcelain Combined Brush-Rest and Water Dropper, from the Ca Mau Cargo. This Yongzheng (1723-1735) porcelain scholars object depicts the ‘Three Friends’ a bird, deer and a monkey. 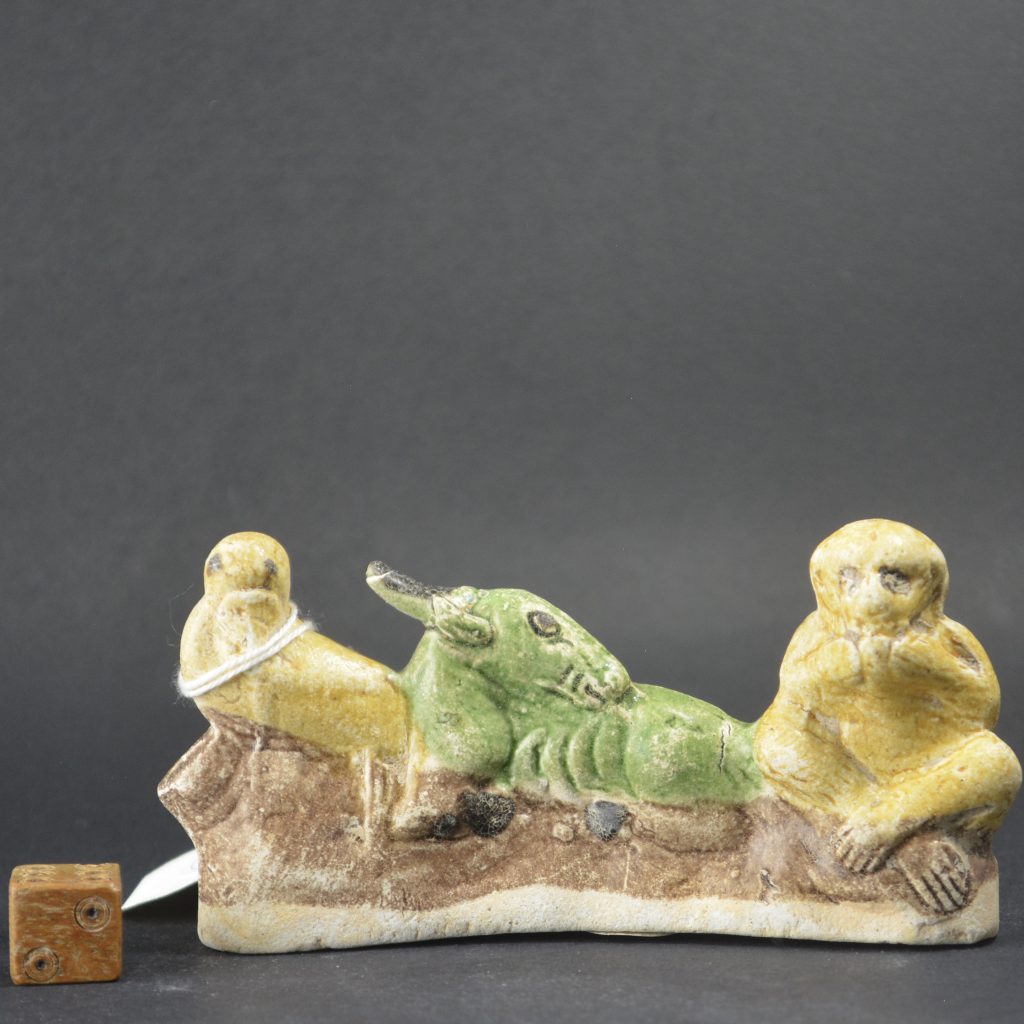 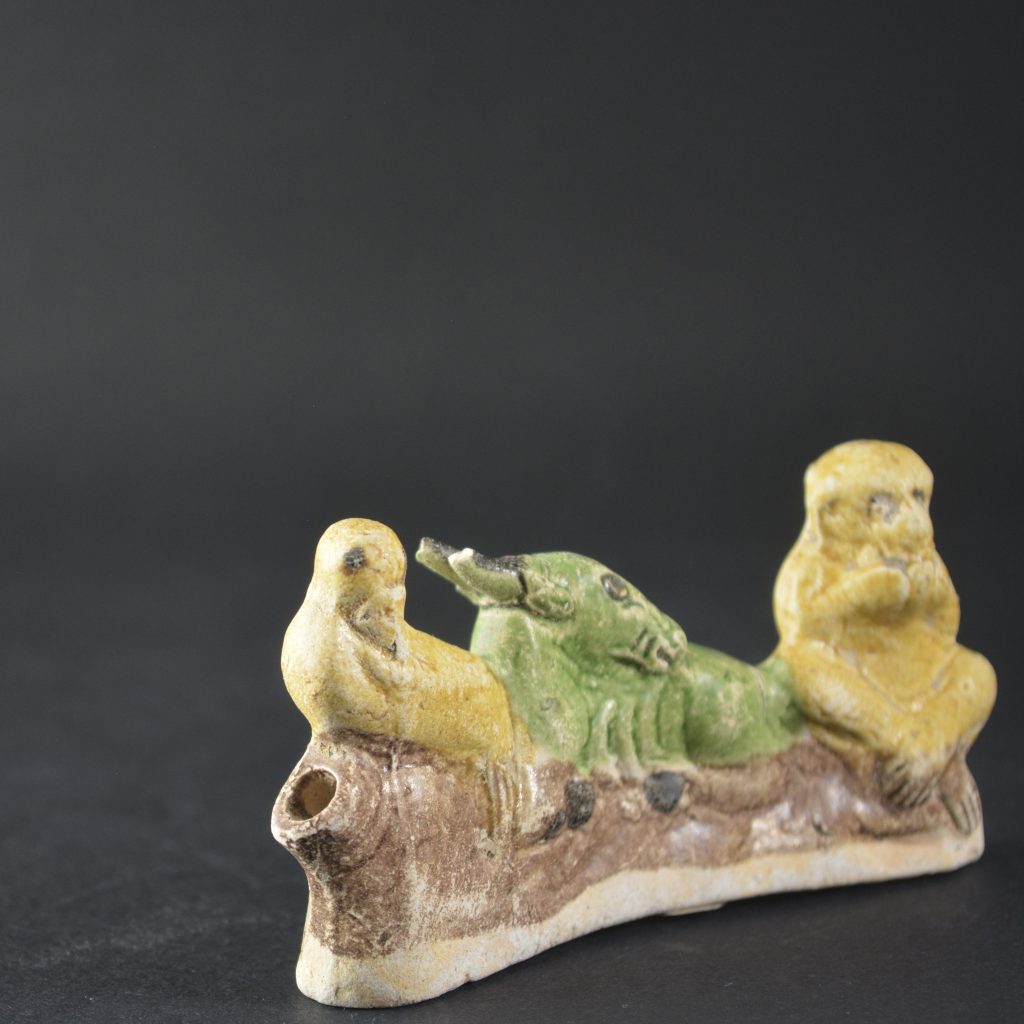 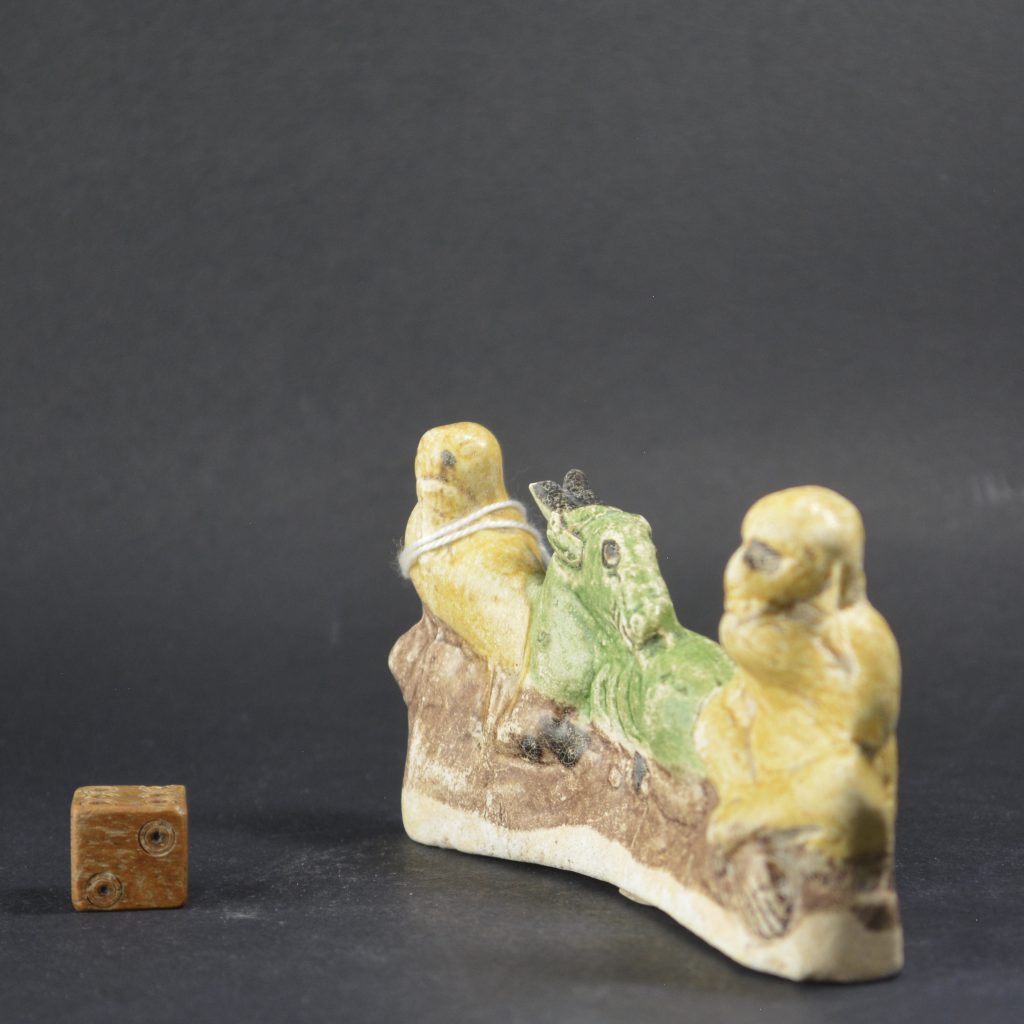 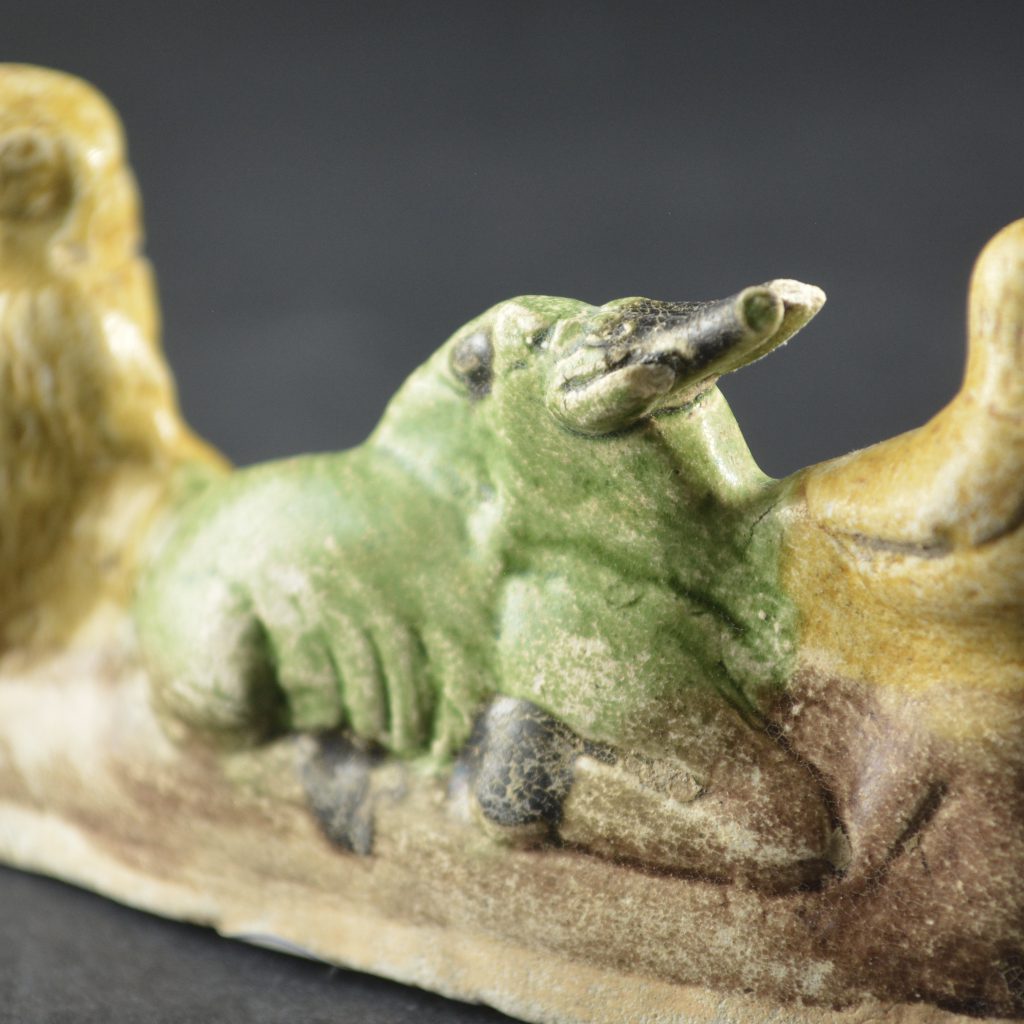 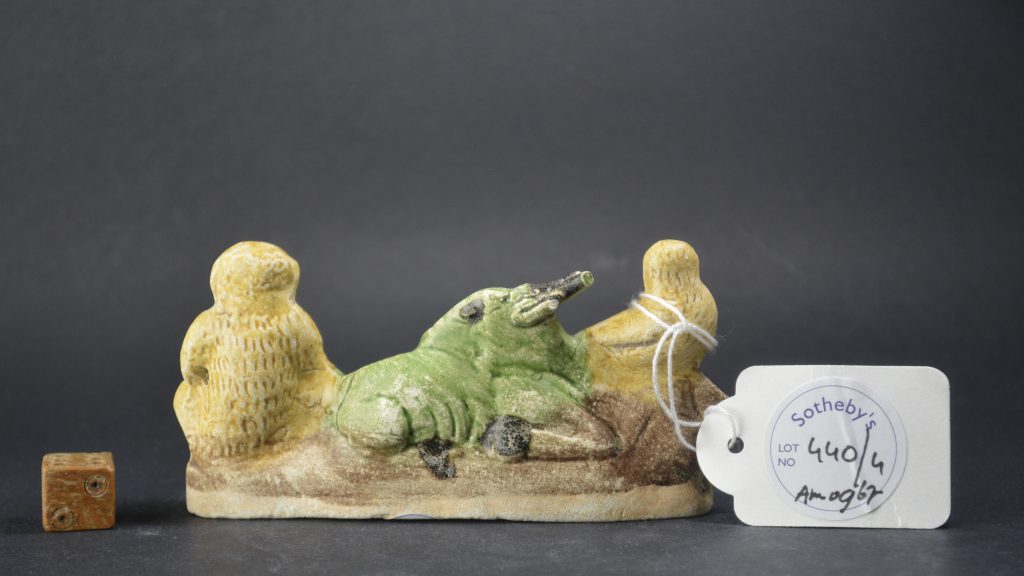 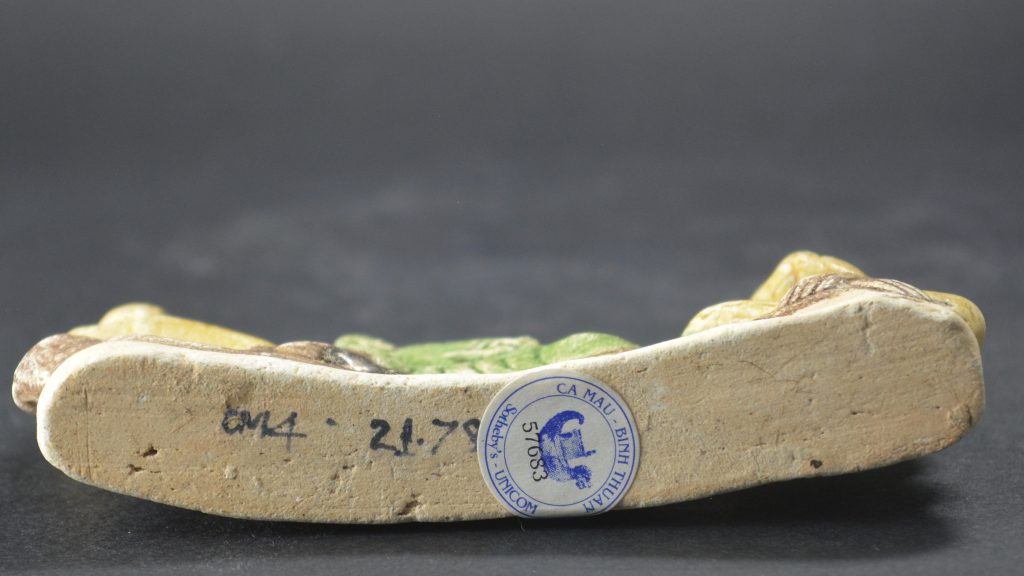 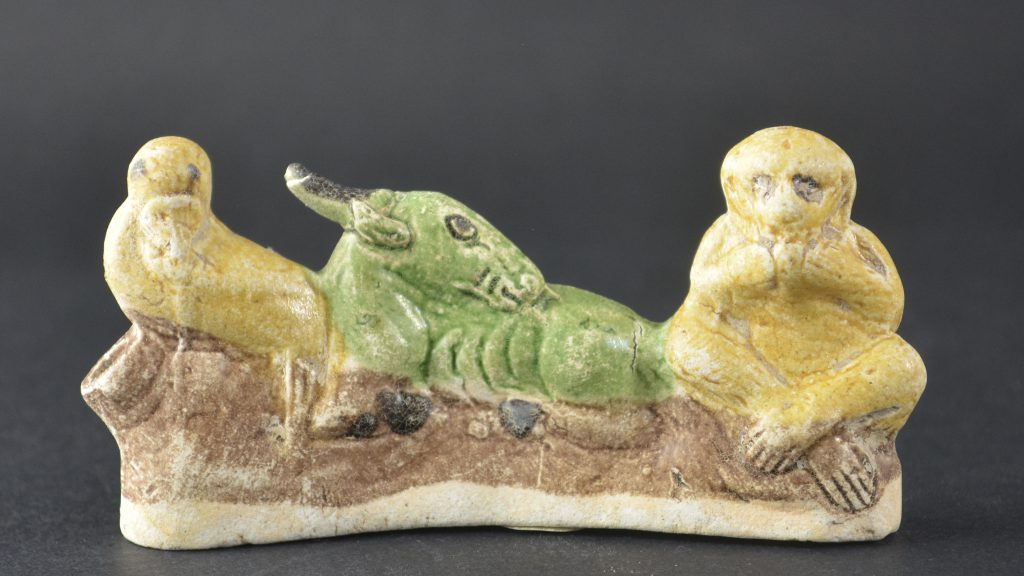 The Ca Mau Cargo :
Dating is often one of the most contentious issues when researching a shipwreck site. In this case, an approximate date is not difficult to ascertain. Coins that date from the Kangxi Period (1662-1722) were recovered from the wreck. Chinese coins, like their Western counterparts, were often in circulation over a long period of time, therefore these coins do not necessarily give a Kangxi date for the wreck, but do provide a `not before` date. Most importantly of all, a group of wine cups were recovered from this shipwreck, bearing a four-character Yongzheng mark, indicating that they were made during the Emperor Yongzheng`s reign, which lasted from 1723 to 1735. The style of the potting, glazing and painting of these cups are all consistent with other known pieces from the Yongzheng period. Other porcelain removed from the wreck is also consistent in style, which suggests that all the porcelain was made during the same period. For a number of years now, I have suspected that a considerable amount of porcelain ascribed to the reign of the Emperor Kangxi (1662-1722) was in fact made during the shorter reign of his son Yongzheng (1722-1735). After studying the two styles over a long period of time, it has become apparent to me that many pieces of Yongzheng porcelain previously had been wrongly identified as belonging to the better-known period of Kangxi. The Ca Mau wreck, I believe, helps re-establish the importance of the large output of Chinese export porcelain during the Yongzheng period. It must be remembered, however, that a dynastic change did not necessarily influence the styles of Chinese export porcelain. The first year of Yongzheng by no means saw a sudden shift in ceramic styles. The Chinese porcelain export trade was a commercial enterprise and popular patterns were used for as long as demand continued. Change as well as technical innovation occurred but it was the changing demands of customers that brought about a change in style from the late Kangxi period to the Yongzheng Period, indeed styles always change because producers try to understand what will sell at any given moment. These changes are evident in the ceramics recovered from the Ca Mau cargo. The use of `Pencilled` decoration is an example. The decoration is painted in outline only, without the use of tonal washes. The style is found in some late Kangxi porcelain but it reached maturity during the Yongzheng period. The profile of some of the tea bowls became less rounded, and the manner of painting faces and hair also changed during this period. All these elements are to be found in the porcelain recovered from the shipwreck. The cargo forms a most useful historical bridge between the Kangxi porcelain of the Vung Tau Cargo produced during the 1690`s and the Qianlong porcelain produced in 1750-1751, recovered from the wreck of the Geldermalsen, now known as the Nanking Cargo.

Monochrome Glazed Biscuit Porcelain :
Chinese porcelain with a clear turquoise, green or aubergine glaze over a biscuit body was exported to Europe from the Kangxi period (1662-1722) onwards. The brightly colour with a clear shiny glaze was like nothing produced in Europe at the time. Monochrome glazed Chinese export porcelain was especially popular in France during the 18th century and to this day many pieces can be found in French private collections. French taste in the second quarter of the 18th century tired of Chinese blue and white porcelain, indeed by this time France was producing it`s own blue and white porcelain at St.Cloud among other factories. Collectors like the duc d`Aumont had a large collection of monochrome Chinese porcelain, with celadons as a favourite. They were sometimes made more French by the addition of ormolu mounts, 43 % of his collection had mounts.

Objects For The Scholar`s Desk :
The term `Scholar`s object` refers to something used by a Chinese scholar in his studio, it includes everything from tables, screens and chairs to the smaller objects found on the scholar`s desk. The material used for these desk objects varied greatly, from bamboo to stone, ivory, wood and metal, but ceramics were by far the most commonly used material, even though ceramics rated lowest in ranking of importance. Bamboo, ivory or wood might not be durable enough and metal was sometimes too heavy but ceramic objects could be thrown or moulded in to an infinite variety of forms. Most of the objects made centered around the functions of writing and painting. Brushpots of different sizes and shape were needed to take the various types of brush, the same applies to brushrests. Water droppers for adding water to dry solid ink when it was ground on an inkstones, as well as the inkstones themselves were all needed, as were water-pots and brushwashers, all of these could be made of porcelain. But these were not merely functional items, they conveyed symbolic mean, often enhancing scholarly virtues and the wish for longevity. They were meant to inspire the writer, poet and artist but it is clear they could also exhibit a great sense of humour, sometimes having almost child like quality. Objects for the scholar`s desk were made out of many different ceramic bodies, during the Song Dynasty (960-1279) Qingbai porcelain was most frequently used, often in moulded form but by the late 17th and early 18th century biscuit porcelain with coloured glazes such as green, aubergine or turquoise were popular. It appears highly likely some of these objects were shipped to Europe at the time, especially France and were they were seen as whimsical novelties divorced from their true scholarly function.