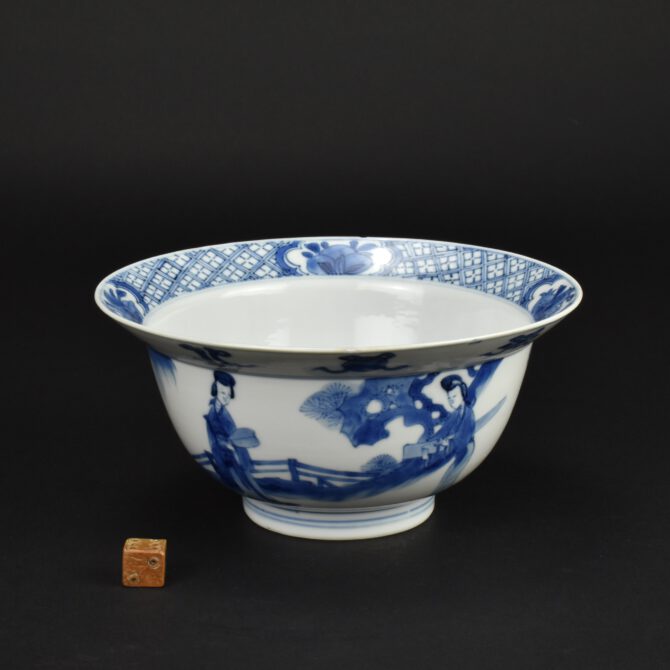 A Kangxi Blue and White Porcelain Klapmuts Bowl, Jingdezhen Kilns c.1690-1710. This bowl with its apocryphal Chenghua mark is typical of the Chinese porcelain imported by the V.O.C. into the Netherlands. The shape, a Klapmuts goes back to the late Ming dynasty and was first used for Kraak porcelain. This Dutch term refers to a circular bowl with an everted rim, if you look at the bowl when it is upside down, the origin of the word becomes apparent. It is is similar to Dutch hats of the 17th century, these were hats often used by the poor and made from wool, more expensive versions were made from beaver. The kraak examples were shallow, the rim made an idea place to rest a spoon. The kangxi versions are far deeper, such as the present example. These were used for decoration and can be seen in different sizes adorning the tops of furniture in 17th century Dutch paintings. The scene of ladies might well be from Romance of the Western Chamber / Xi Xiang Ji. See below for two examples. Kangxi blue and white export porcelain object are sometimes found with the six character mark of the emperor Kangxi (1662-1722) to the base. These none-imperial reign marks are referred to as minyao in Chinese, denoting them as `popular wares` not destined for court use. However the majority of the marked pieces bare the mark of earlier Ming dynasty emperors, some are Jiajing (1522-1566), occasionally Wanli (1573-1620) but by far the most commonly encountered marks are those of Chenghua (1465-1487). David Howard in `The Choice of the Private Trader` (David S. Howard, Zwemmer, 1994) notes that “The Chenghua mark …. was not intended as a forgery, but rather as a compliment to the quality of the piece and to replace the mark of Kangxi who had forbidden the use of his name on porcelain made for export after 1682; a ban which nominally remained in force until the late 19th century”. It appears this ban was not enforced, or if it was only partly enforced, as we have had many Kangxi export pieces made after this date (1682) that bare the six character Kangxi mark. It is worth noting that many 19th century copies of Kangxi blue and white porcelain bare a four character Kangxi mark, something you do not on the original, all Kangxi marks on porcelain of the period were of six character form. 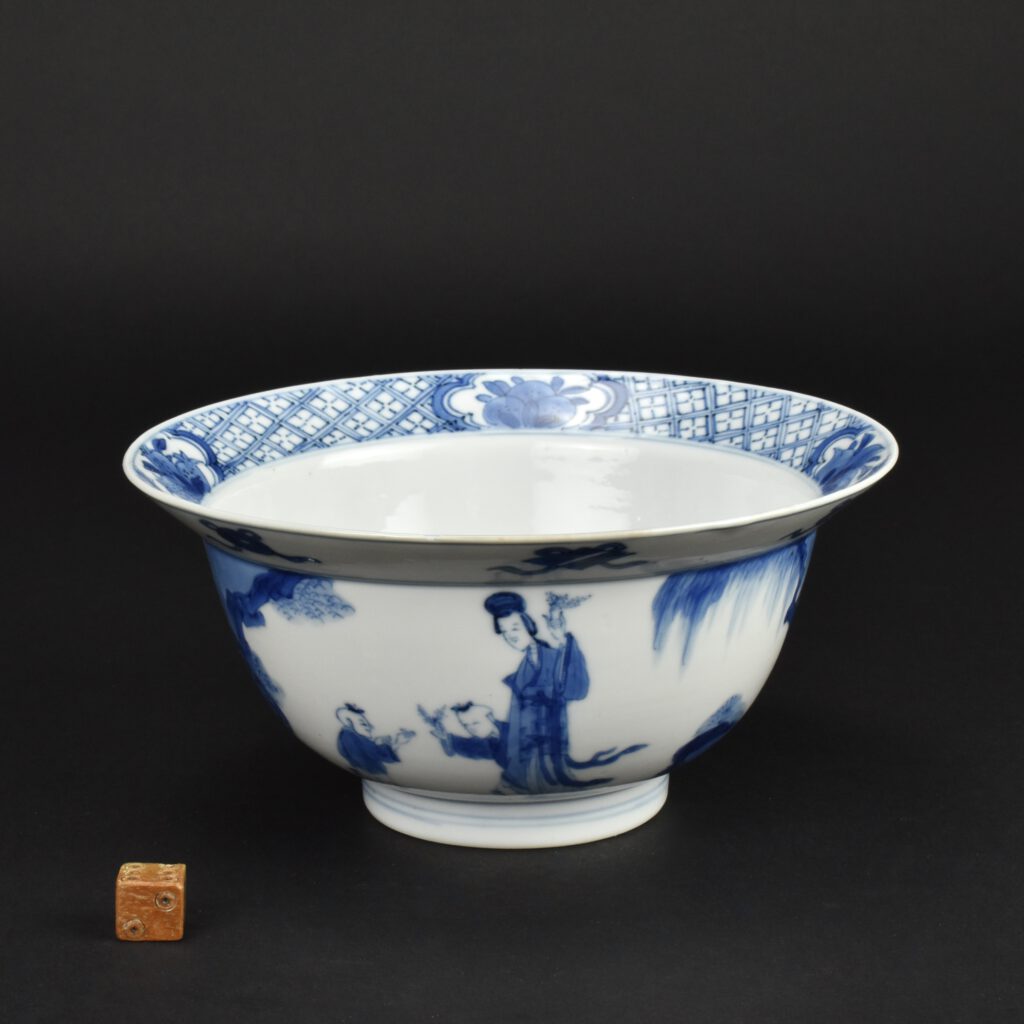 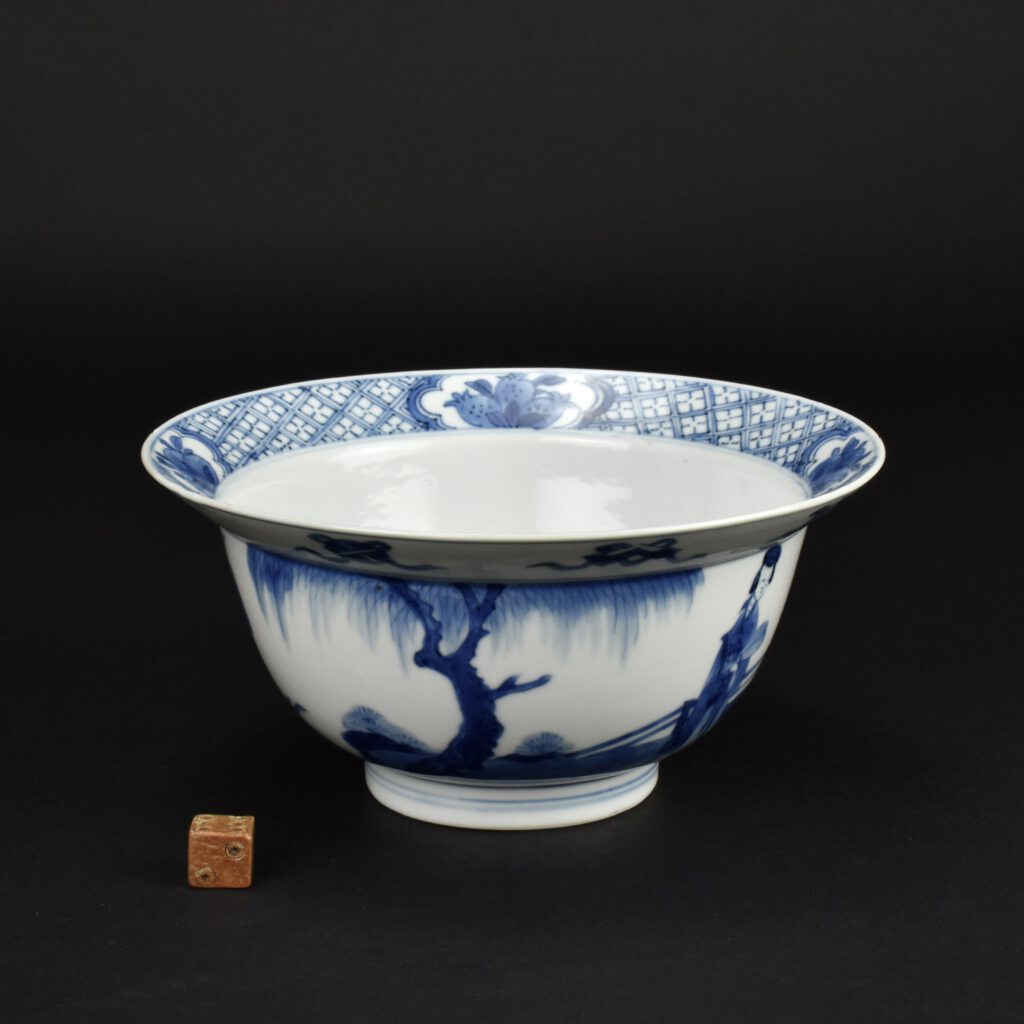 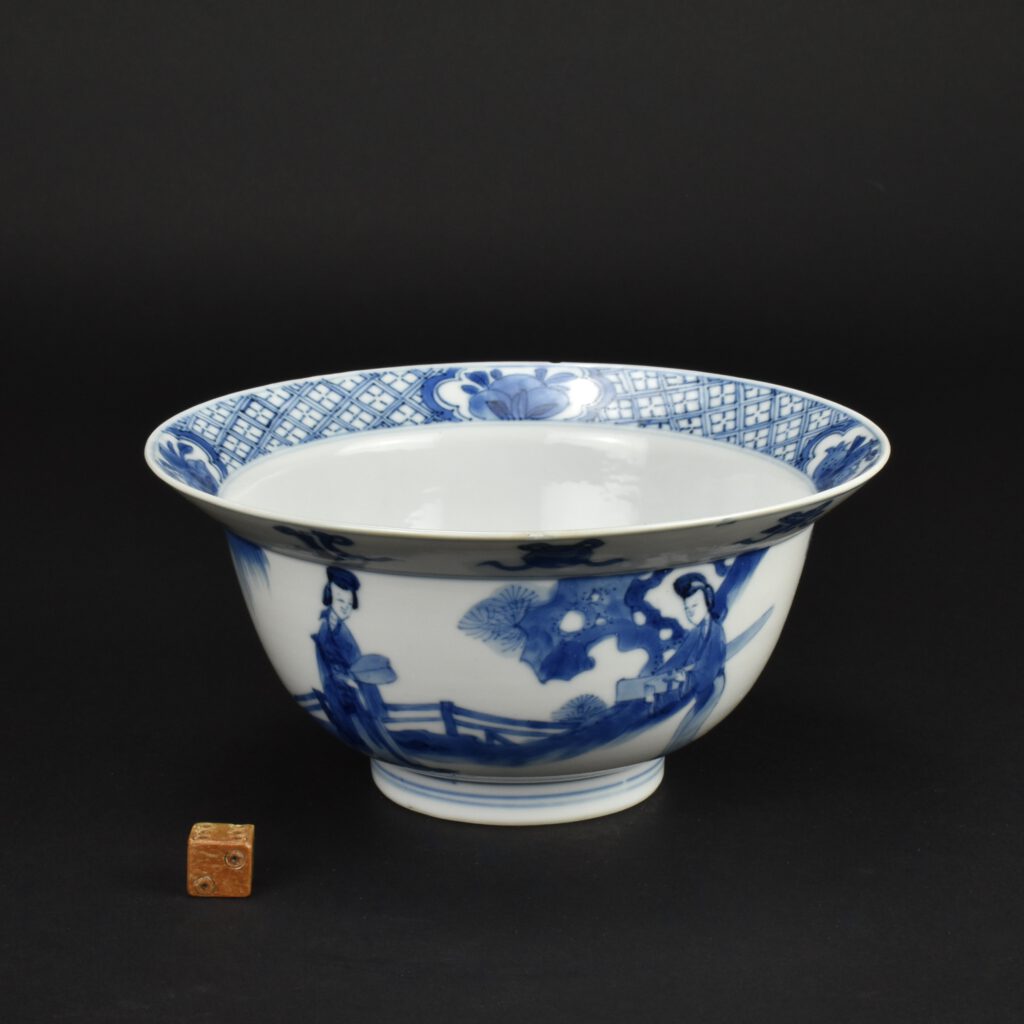 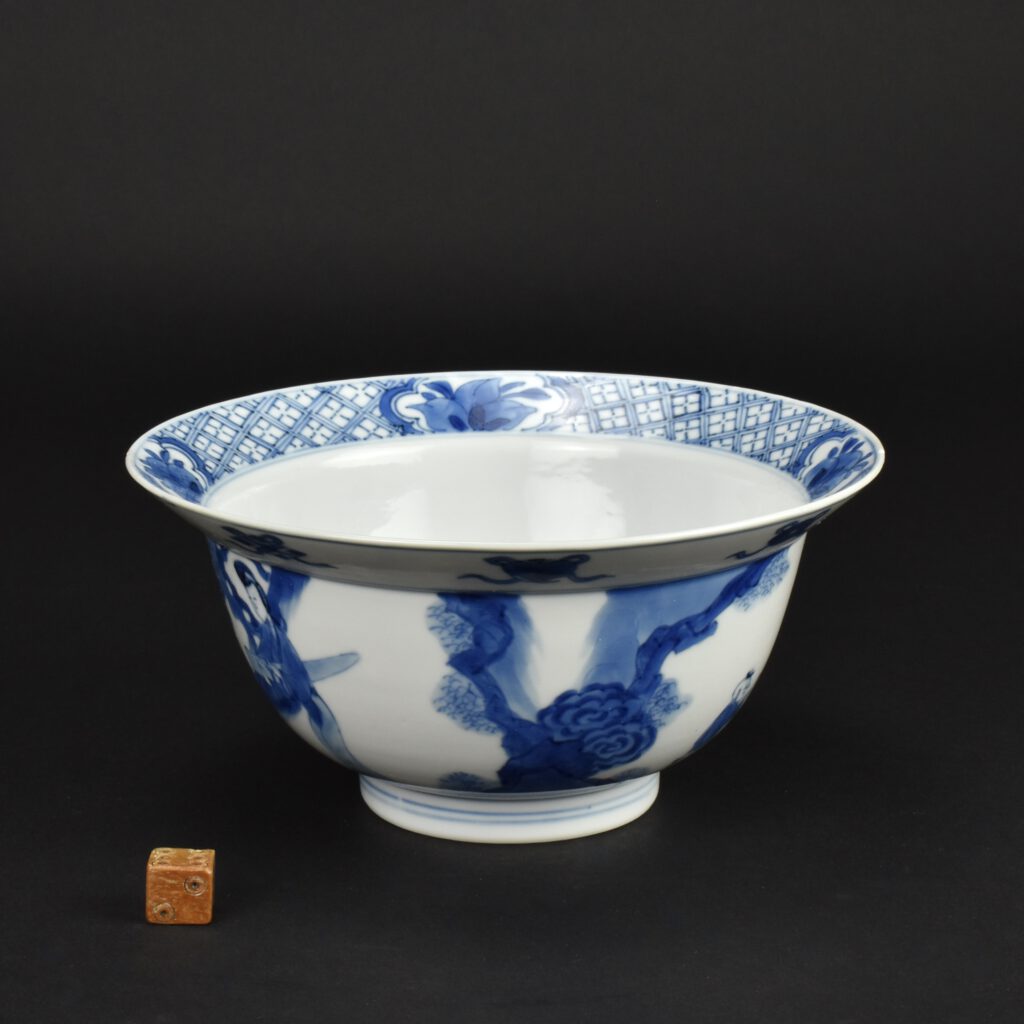 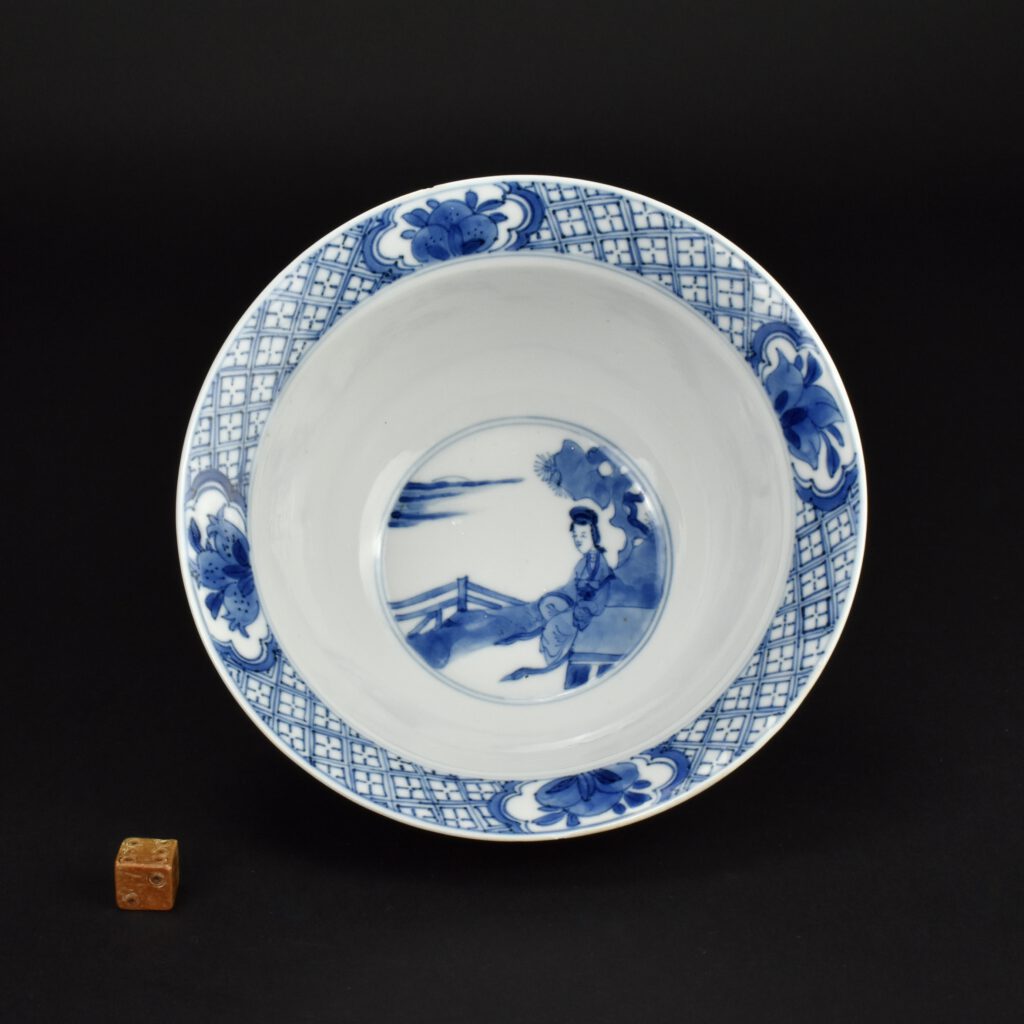 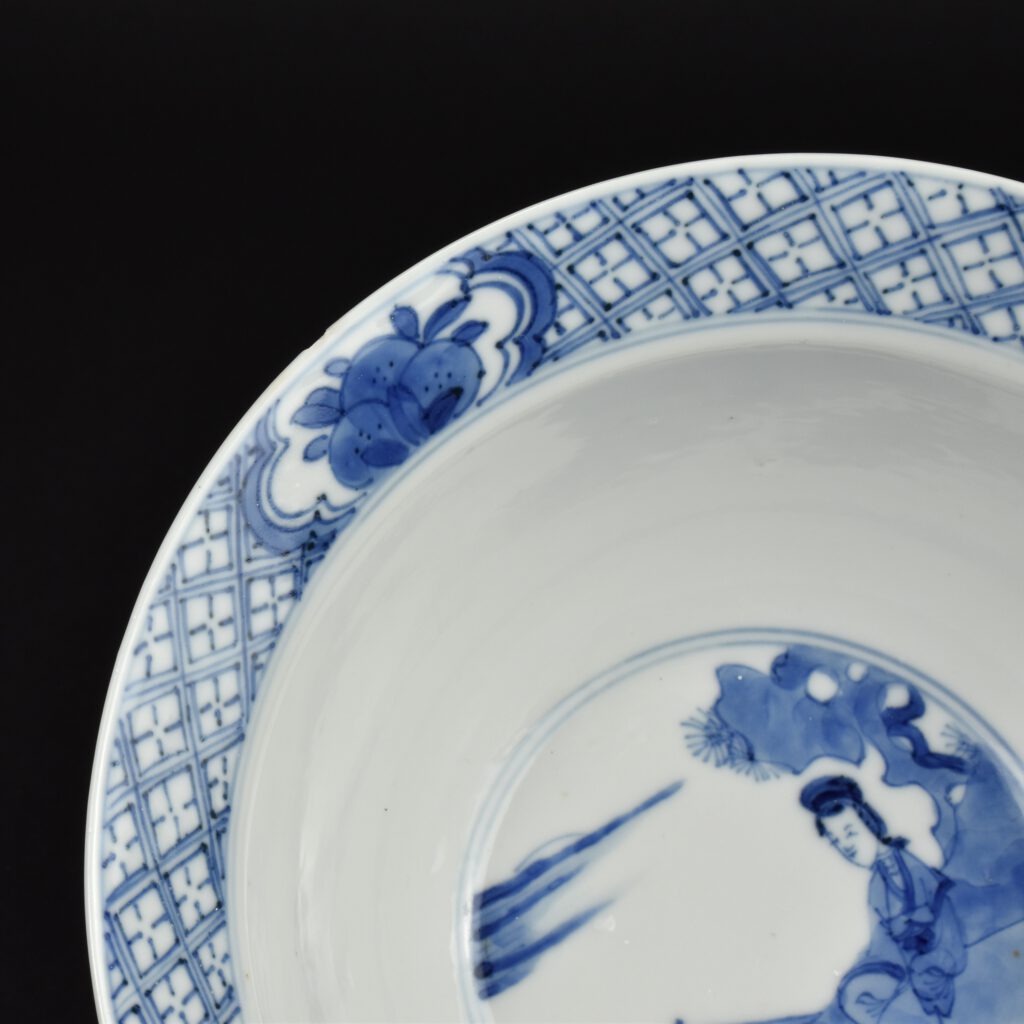 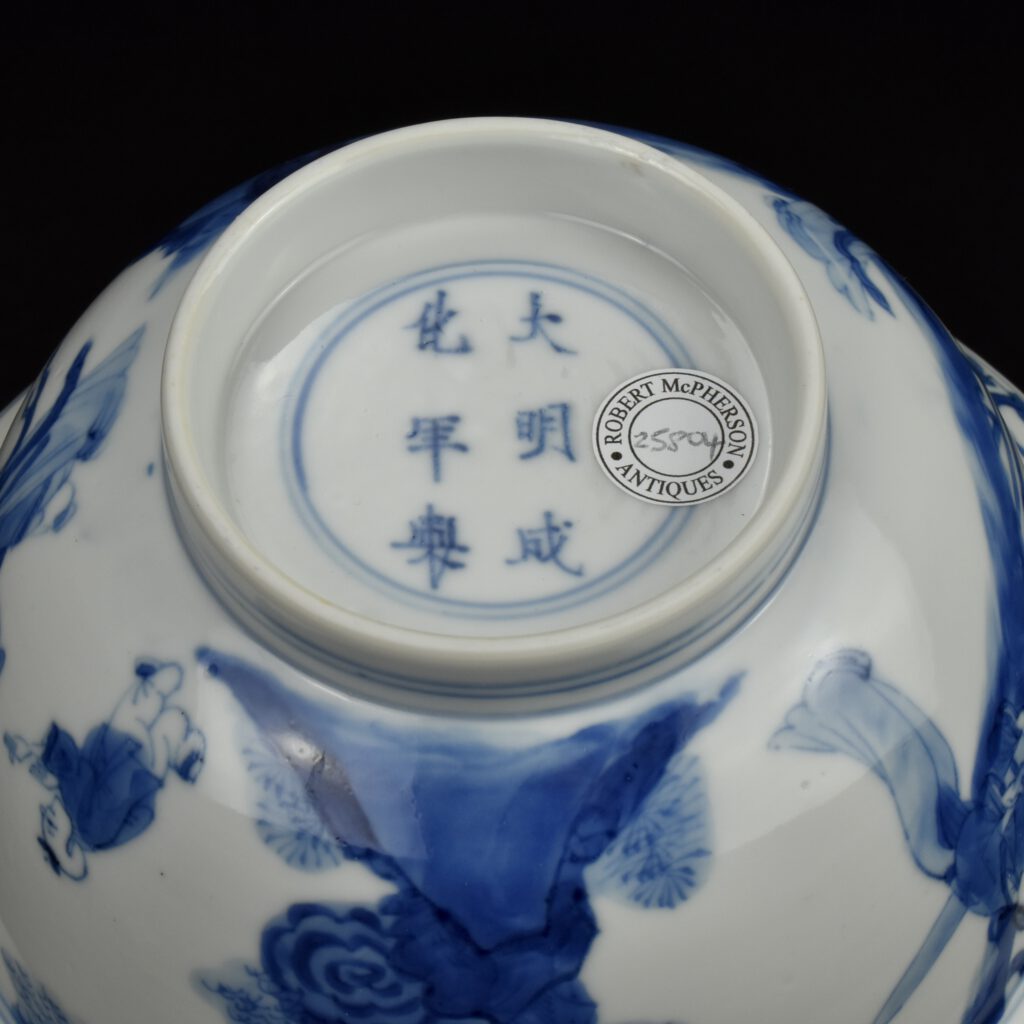 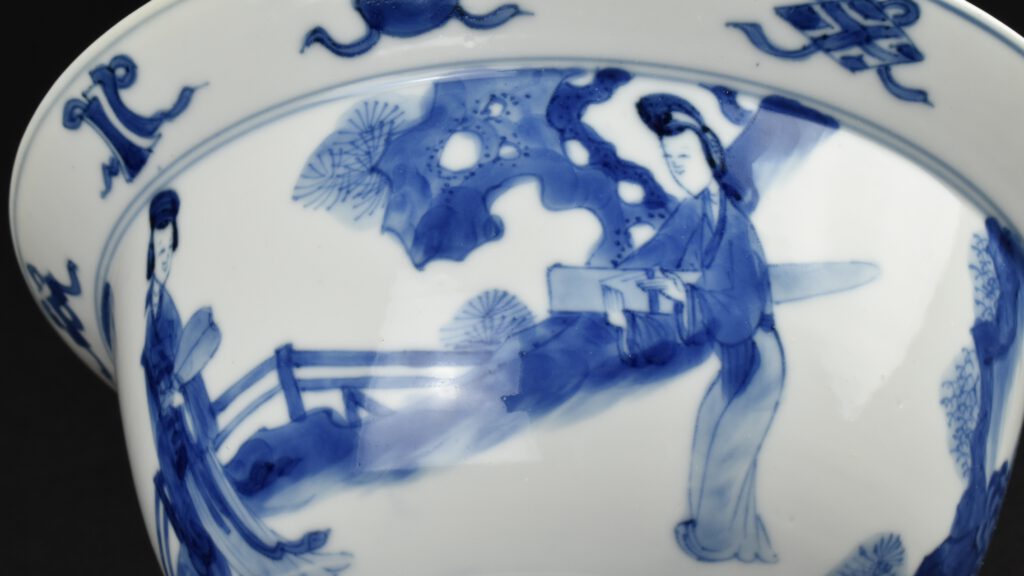 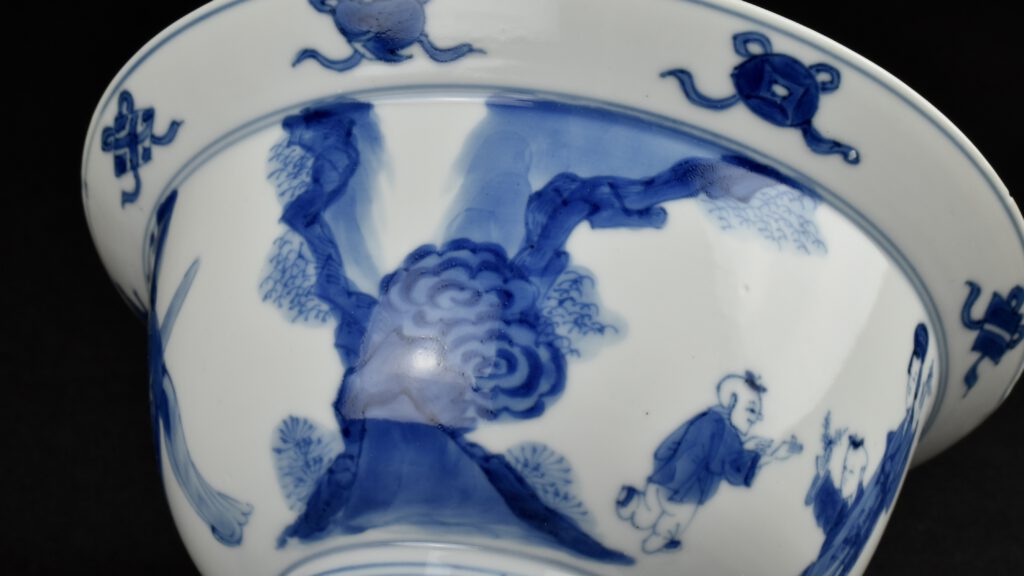 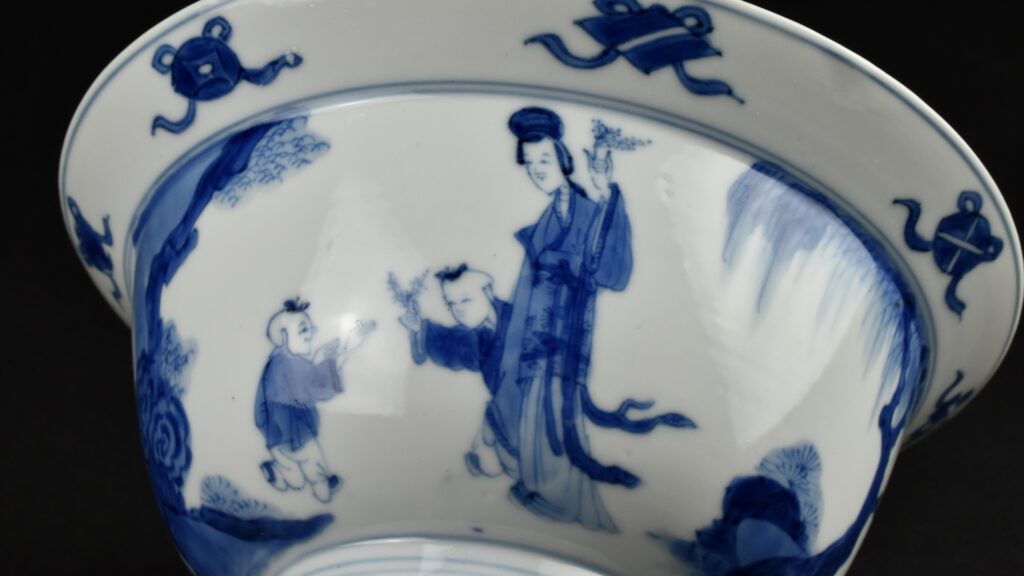 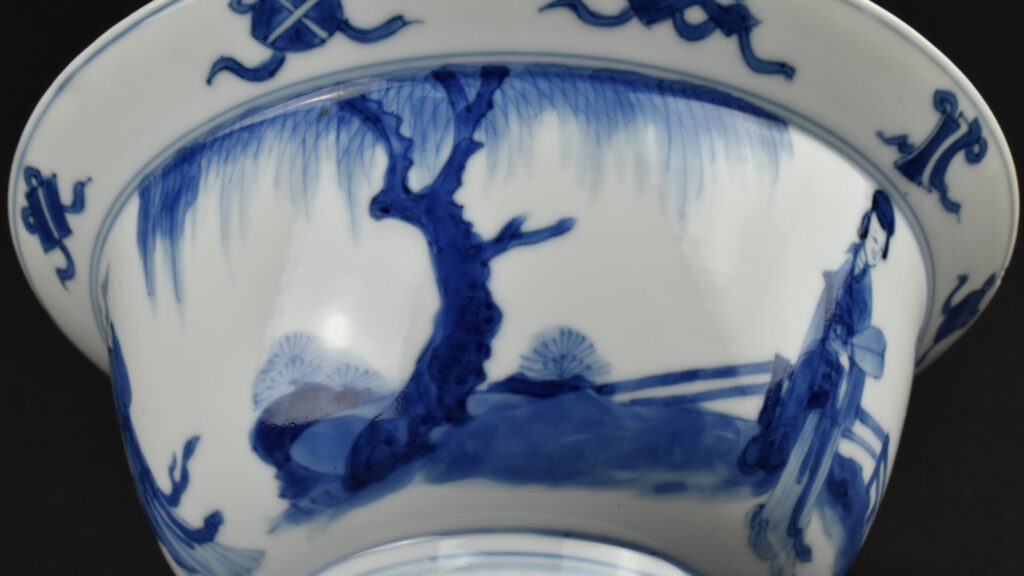 The Yuan Dynasty playwright Wang Shifu (c.1260-1336) is famous for writing  'Romance of the West Chamber' Xi Xiang Ji, which was set during the Tang Dynasty (618-907). It has had an enduring appeal, some of the very first narrative scenes decorated on Chinese blue and white porcelain are taken from this story, they were produced during the Yuan dynasty in the mid-14th century and the designs have been used ever since. The story is of young lovers consummating their love without parental approval, and has been called `China's most popular love comedy` and a `lover`s bible`. At the same time, some have called it potentially dangerous, as there are stories of readers pining away under its influence. There are problems for those of us who wish to identify individual scenes depicted in the West Chamber, these are clearly set out by Craig Clunas in his excellent paper presented to the O.C.S. (A Literary Theme in Chinese Porcelain Decoration, a paper read by Mr Craig Clunas on 11th May 1982, Transactions of the Oriental Ceramics Society 1981-1982). He points out that it is particularly difficult to identify the designs produced during the Qing dynasty. One reason given is there are few reproductions of later editions of the work to compare the designs too, but more problematically the designer, as opposed to the painter, might well have interpreted the scene without any direct reference to the original woodcut. The designs taken from the West Chamber were especially popular during the Kangxi period (1662-1722) particularly in blue and white but they also occur frequently on famille verte of the period. The scene of Zhang Sheng clambering over a wall can be found on blue and white porcelain teaware recovered from the Ca Mau Cargo (Yongzheng period 1723-1735), this particular design was also produced at the period in famille rose enamels.

A Famous Scene from the Romance of the Western Chamber