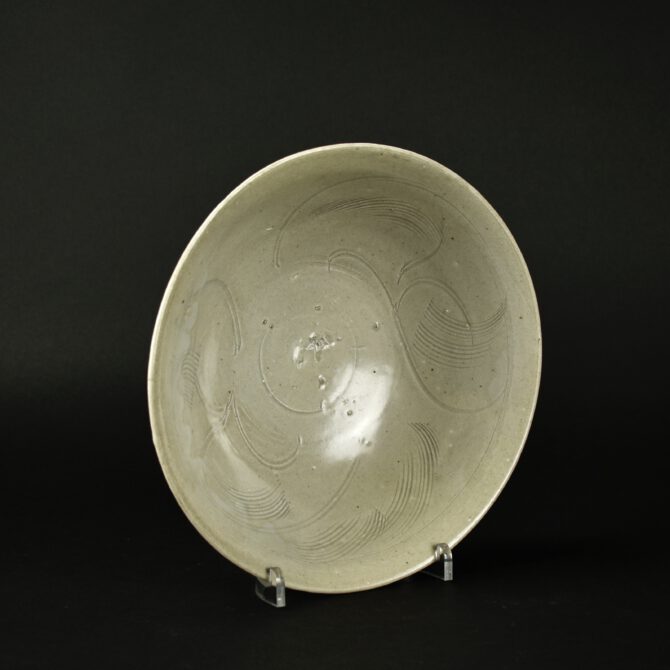 A Song Celedon Ware Bowl, Fujian Province, c.12th Century. Perhaps from the Jepara Shipwreck. The large shallow celadon ware bowl is fluidly carved with abstract foliage using a comb and stylus. The body of the clay is a very light grey, the glaze has been applied rather thinly so the body colour contributed to the look of the piece. Also unlike the more familiar Longquan celadon ware is the lack of bubbles within the glaze. The unglazed base has been rather crudely cut out.

Condition
In excellent condition with almost no sign of being from a shipwreck. The glaze is exceptionally bright and shows no signs of being in a shipwreck.
Size
Diameter : 23.2 cm. (9 inches).
Provenance
The Peter Arlidge Collection of Song Ceramics (for details see below the photographs).
Stock number
25072 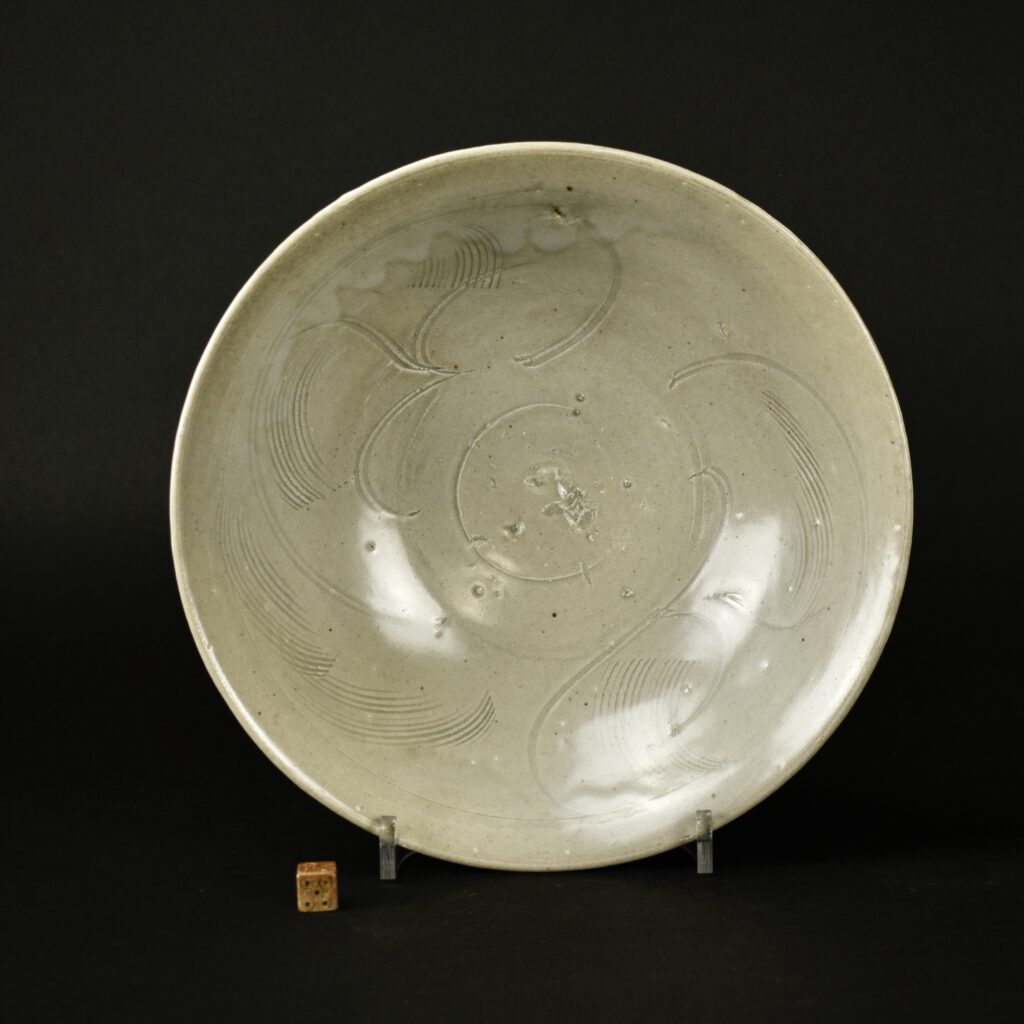 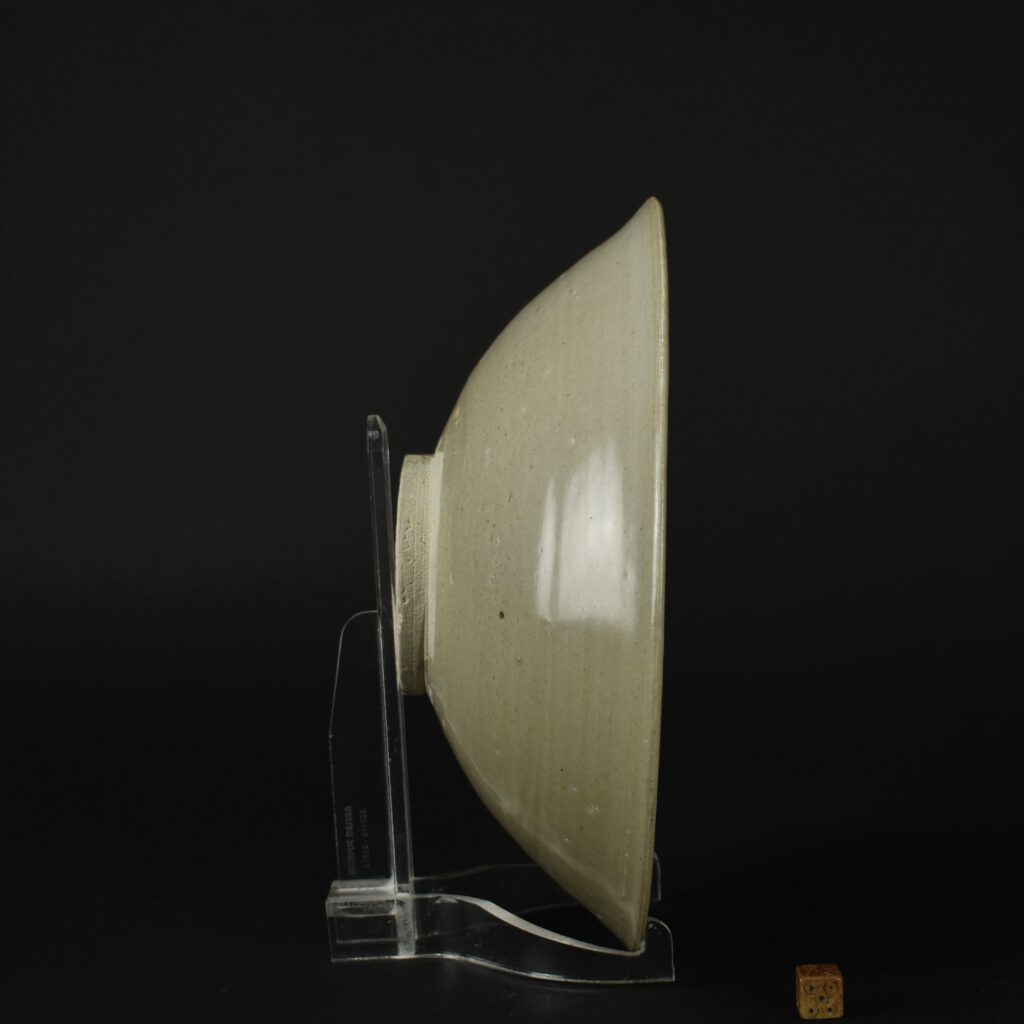 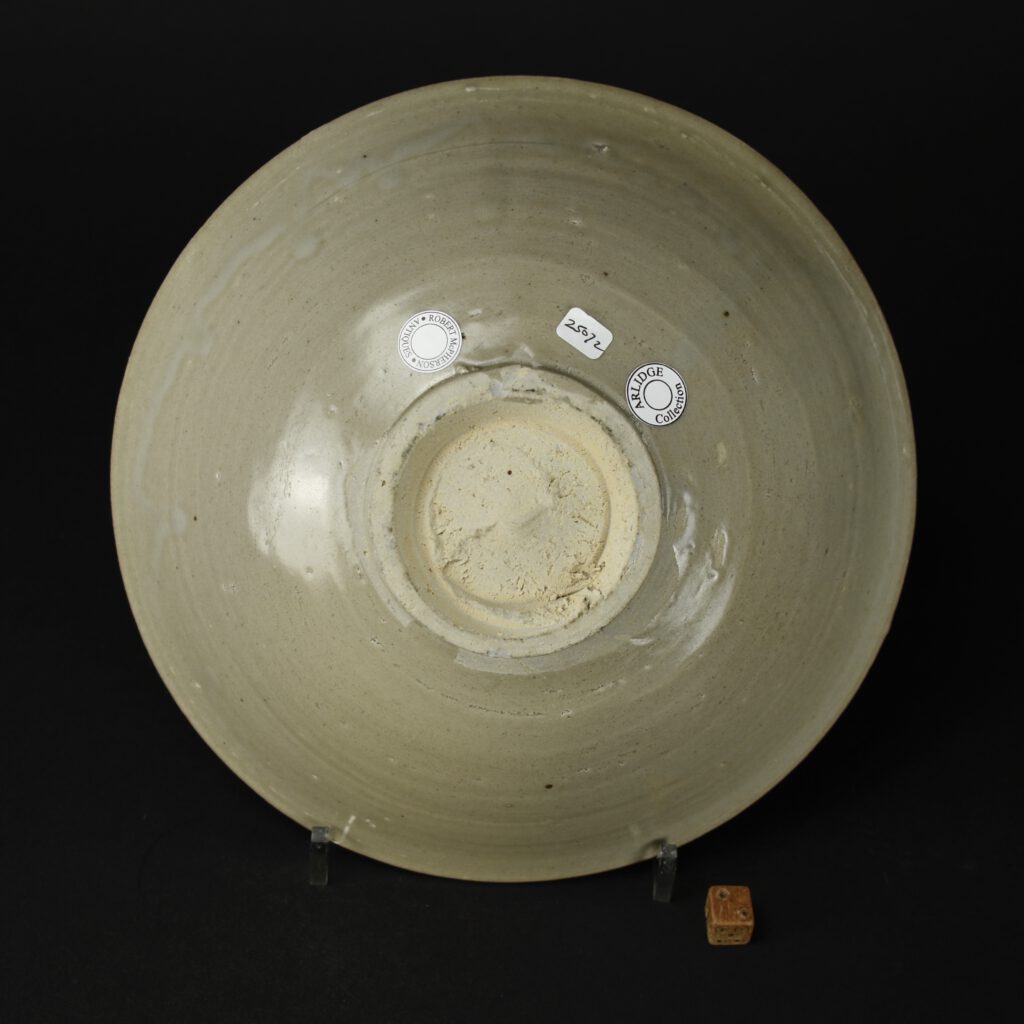 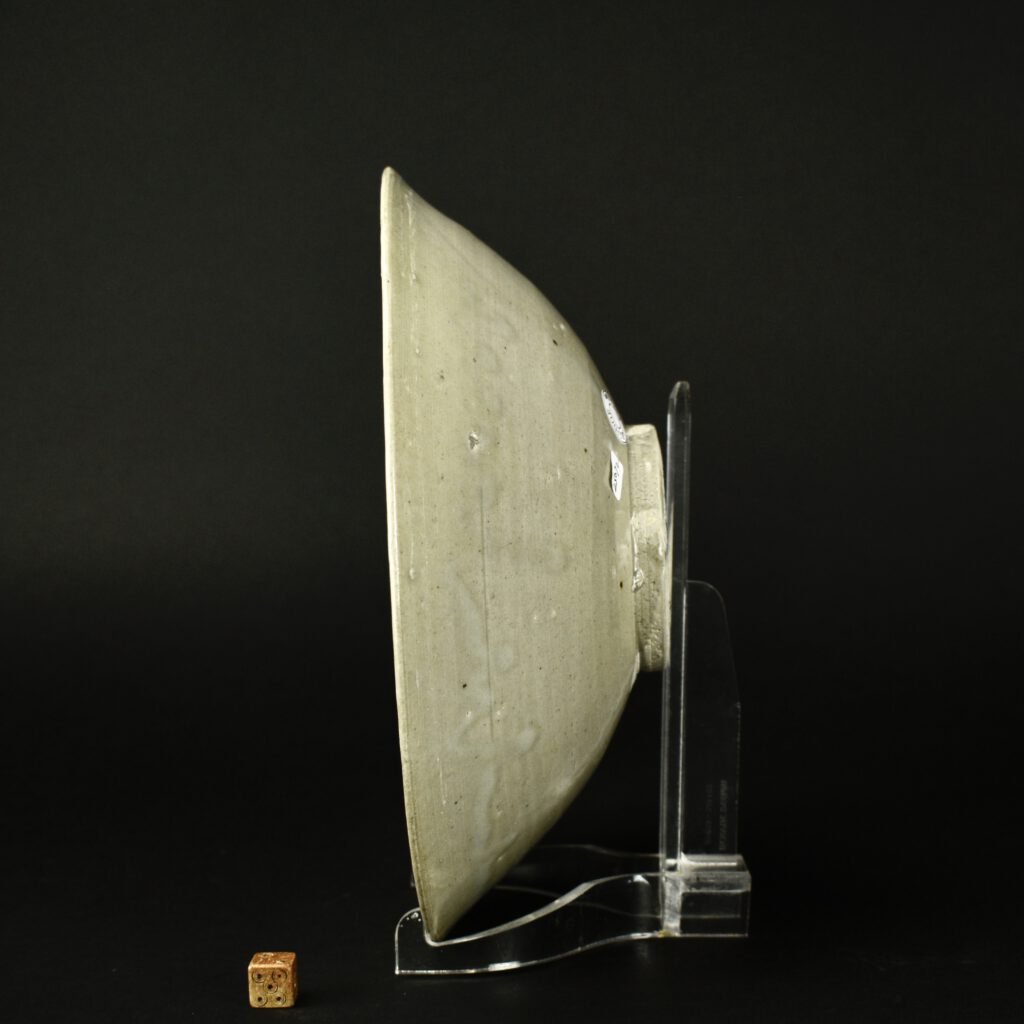 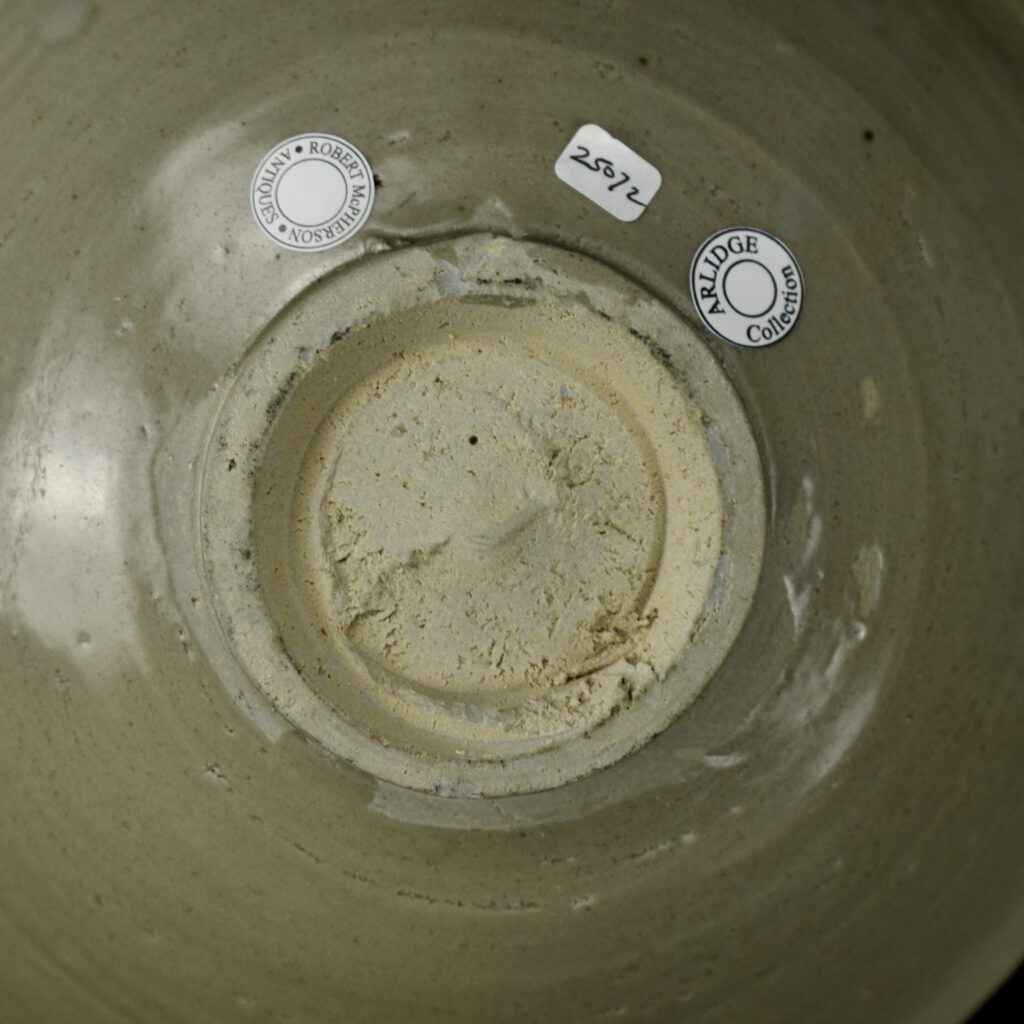 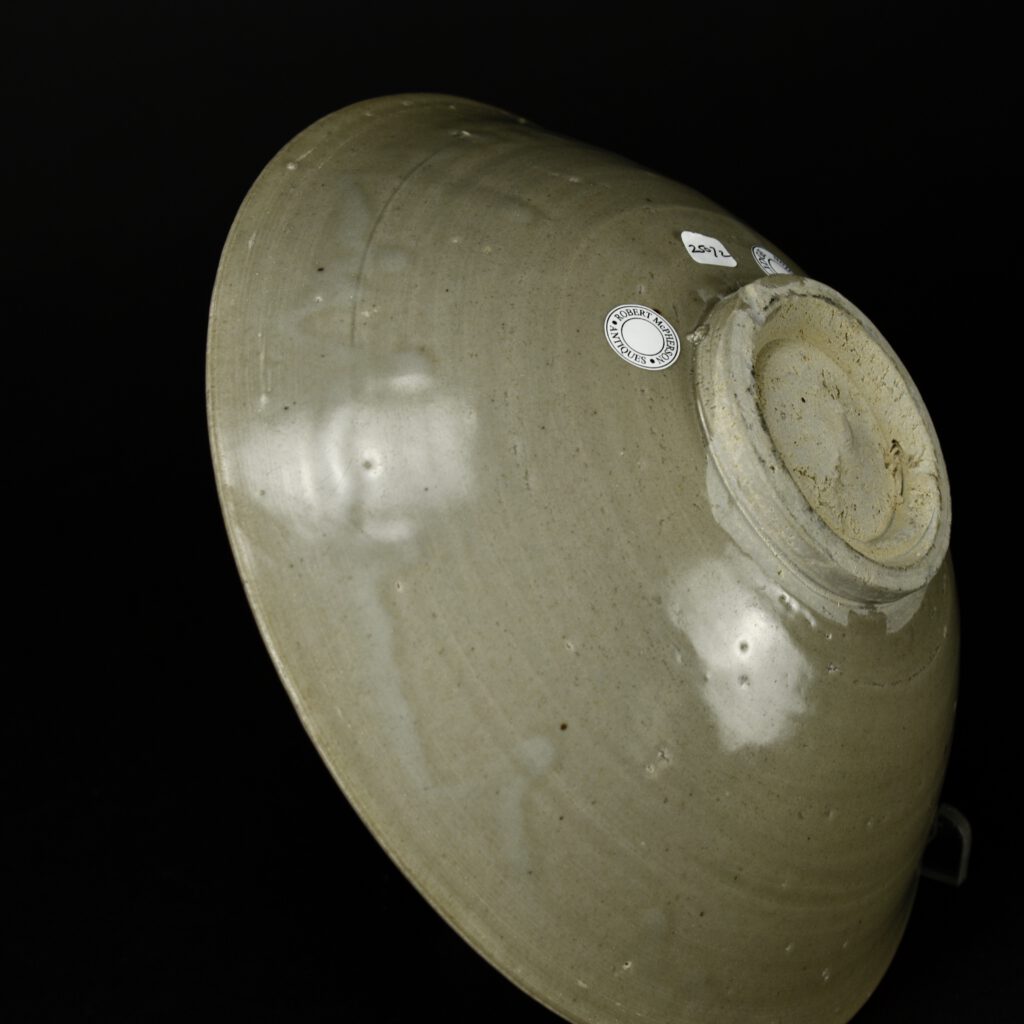 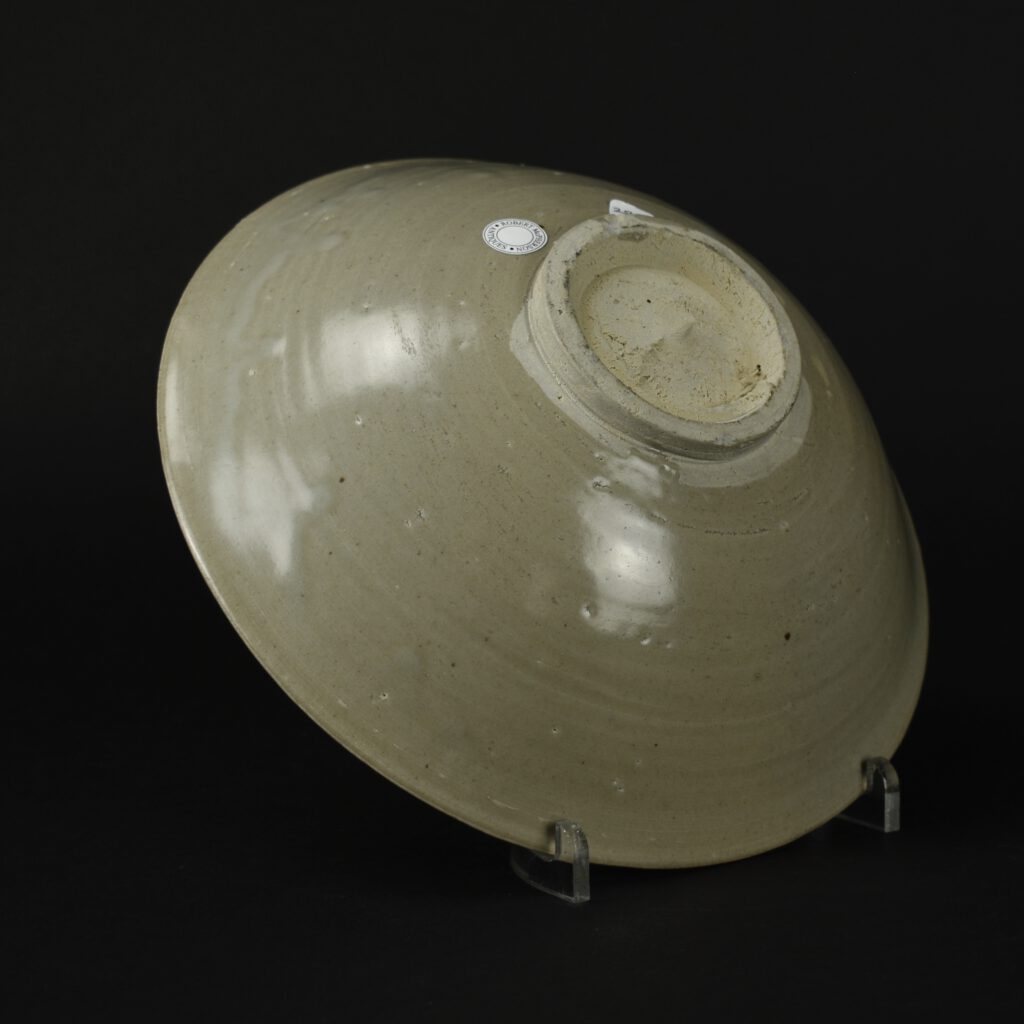 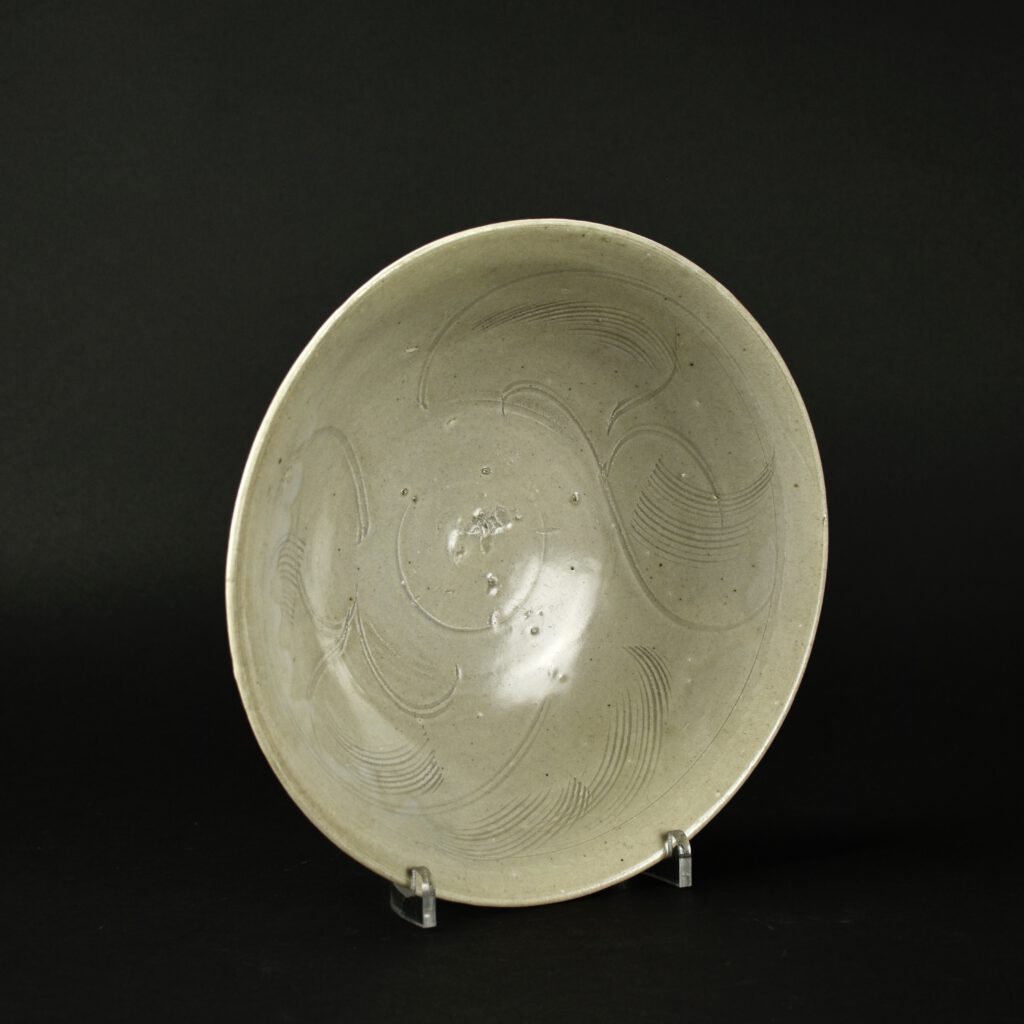 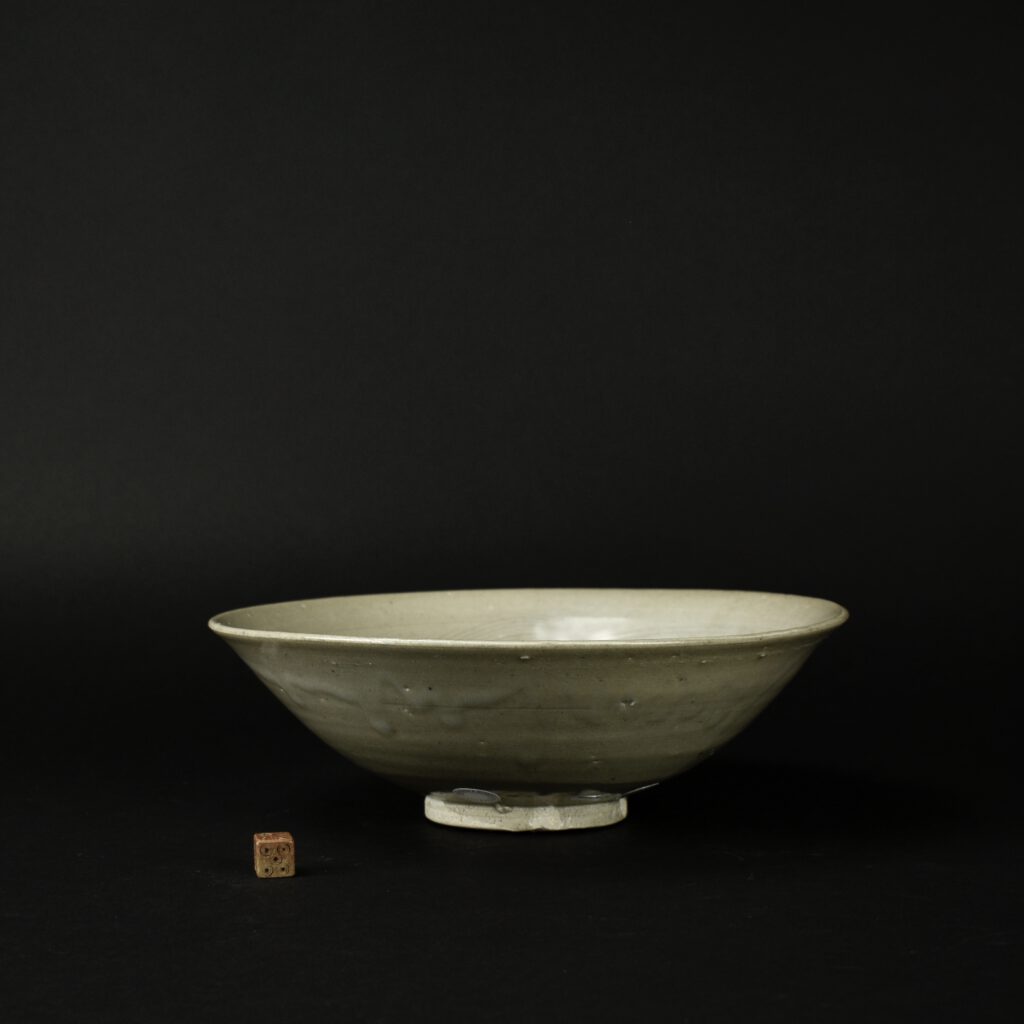 Celadon is a term used to describe several types of Chinese stoneware and porcelain, as well a ceramics from other countries, notably from Korea and Japan. The term is a imprecise one, applying to various types of green glazed ceramics, but not all ceramics with green glazes, there are several wares that have a green glaze that are not refereed to as celadon. For example Green Jun and Ge Ware. For this reason there has been a move to try to clarify the situation by using the term ‘Green Ware’. But for now Celadon is a more familiar and therefore useful term. The origins of the term Celadon are not clear, one theory is that the term first appeared in France in the 17th century and that it is named after the shepherd Celadon in Honoré d’Urfé’s French pastoral romance, L’Astrée (1627), who wore pale green ribbons. (D’Urfe, in turn, borrowed his character from Ovid’s Metamorphoses.) Another theory is that the term is a corruption of the name of Saladin, the Ayyubid Sultan, who in 1171 sent forty pieces of the ceramic to Nur ad-Din, Sultan of Syria. Yet a third theory is that the word derives from the Sanskrit sila and dhara, which mean “stone” and “green” respectively.
Celadon ware originated in Zhejiang Province in the Eastern Han Dynasty, however green monochrome glazes can be found on stoneware much before that date. Zhejiang is were the famous Longquan Celadons were made but Celadon wares were also produced at Jiangsu, Hubei, Hunan and Jiangxi. The production of Celadon Ware required a reducing atmosphere of around 1300 degrees C., the colouring agent was a mixture of iron oxide and titanium. The glaze was applied very thickly, and was full of tiny bubbles which defuse the light giving the appearance of richness and softness.

The Jepara Wreck contained numerous coins, the latest was struck during the reign of Jian Yian datable to no later than A.D 1130. Chinese coins were in circulation for many years and looking at the ceramics they certainly appear to be later. We had a large group of pieces from this wreck which we incorrectly dated to the Yuan Dynasty (1279-1368) but I now feel the recovered ceramics date from the mid to late 12th century. However it might turn out that these pieces date from nearer 1130 than I now think.
The ceramics recovered were rather basic, utilitarian pieces but not without a certain rustic charm. Most of the ceramics were either celadon wares of Tongan type and Qingbai ware both of which appear to originate from Fujian Kilns. Celadon fragments found at the Putian and Lianjiang Pukou kiln match celadon bowls from the Jepara wreck.