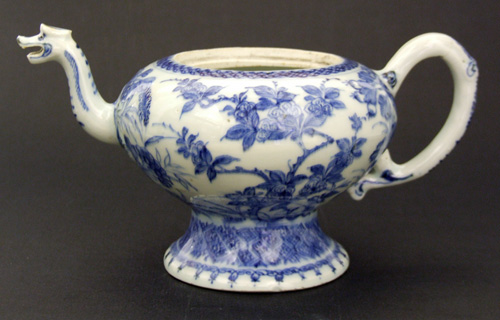 A Rare Early 18th Century Chinese Export Porcelain Teapot. The Form Possibly Based on European Silver Prototype has a Dragon Terminal to the Spout, and is Moulded where the Spout Meets the Body. Th Moulded Handle has a Stud Either Side Where the Top of the Handle joins the Body. Decorated in Cobalt Blue of a Silvery Tone Using the `Pencilled` Technique.

Condition
The moulded handle was made in two halves and lutted together, a large firing crack is visiable where the joint has shrunk, this is discoloured and has a crack from it. The finial is a later metal replacement but possibly dates to about 1800.
Size
Diameter : 20 cm (8 inches).
Provenance
N/A
Stock number
21737 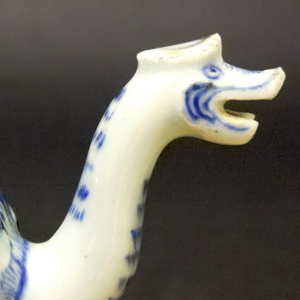 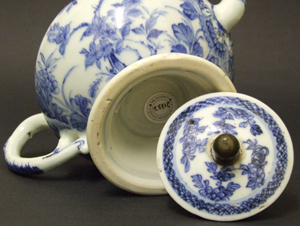 Pencilled Technique or Pencilled Decoration refers to Chinese Blue and White Porcelain painted without tonal washes, in other words it is painted with line-work only.