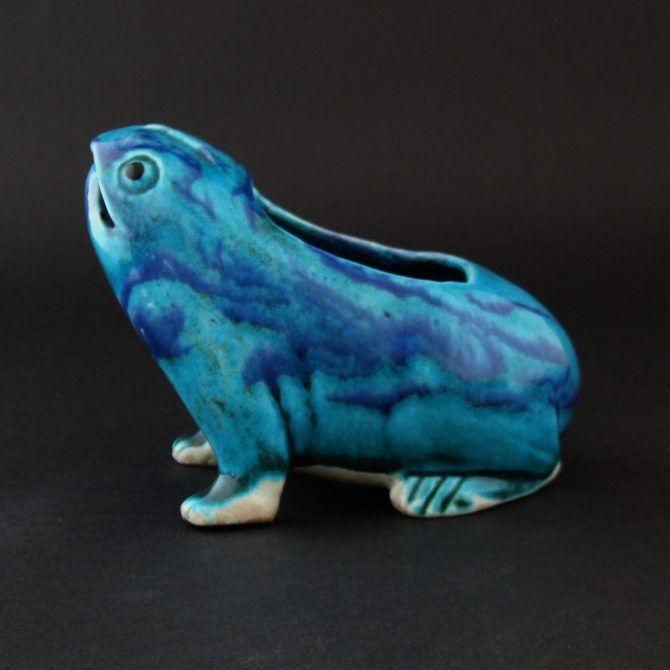 A Large 18th Century Chinese Biscuit Porcelain Frog Shaped Vessel, Yongzheng or Early Qianlong c.1730-1750. The Seated Frog has a Mottled Turquoise and Blue Glaze with a Rectangular Opening on it`s Back, in Line with this is a Small Hole to the Base. 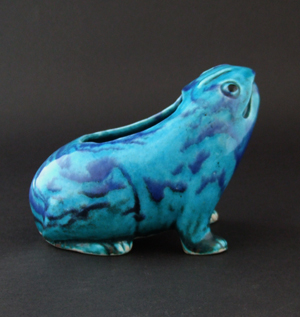 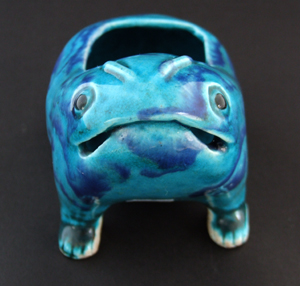 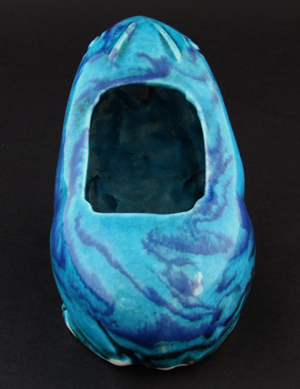 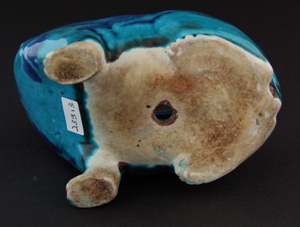 The hole under the frog`s belly is original and the aperture on it`s back looks as if it was not intended to take a cover. Therefore it is unlikely it was intended as an incense burner but was perhaps meant to be for growing a plant.

Monochrome Glazed Biscuit Porcelain :
Chinese porcelain with a clear turquoise, green or aubergine glaze over a biscuit body was exported to Europe from the Kangxi period (1662-1722) onwards. The brightly colour with a clear shiny glaze was like nothing produced in Europe at the time. Monochrome glazed Chinese export porcelain was especially popular in France during the 18th century and to this day many pieces can be found in French private collections. French taste in the second quarter of the 18th century tired of Chinese blue and white porcelain, indeed by this time France was producing it`s own blue and white porcelain at St.Cloud among other factories. Collectors like the duc d`Aumont had a large collection of monochrome Chinese porcelain, with celadons as a favourite. They were sometimes made more French by the addition of ormolu mounts, 43 % of his collection had mounts.

Objects For The Scholar`s Desk :
The term `Scholar`s object` refers to something used by a Chinese scholar in his studio, it includes everything from tables, screens and chairs to the smaller objects found on the scholar`s desk. The material used for these desk objects varied greatly, from bamboo to stone, ivory, wood and metal, but ceramics were by far the most commonly used material, even though ceramics rated lowest in ranking of importance. Bamboo, ivory or wood might not be durable enough and metal was sometimes too heavy but ceramic objects could be thrown or moulded in to an infinite variety of forms. Most of the objects made centered around the functions of writing and painting. Brushpots of different sizes and shape were needed to take the various types of brush, the same applies to brushrests. Water droppers for adding water to dry solid ink when it was ground on an inkstones, as well as the inkstones themselves were all needed, as were water-pots and brushwashers, all of these could be made of porcelain. But these were not merely functional items, they conveyed symbolic mean, often enhancing scholarly virtues and the wish for longevity. They were meant to inspire the writer, poet and artist but it is clear they could also exhibit a great sense of humour, sometimes having almost child like quality. Objects for the scholar`s desk were made out of many different ceramic bodies, during the Song Dynasty (960-1279) Qingbai porcelain was most frequently used, often in moulded form but by the late 17th and early 18th century biscuit porcelain with coloured glazes such as green, aubergine or turquoise were popular. It appears highly likely some of these objects were shipped to Europe at the time, especially France and were they were seen as whimsical novelties divorced from their true scholarly function.